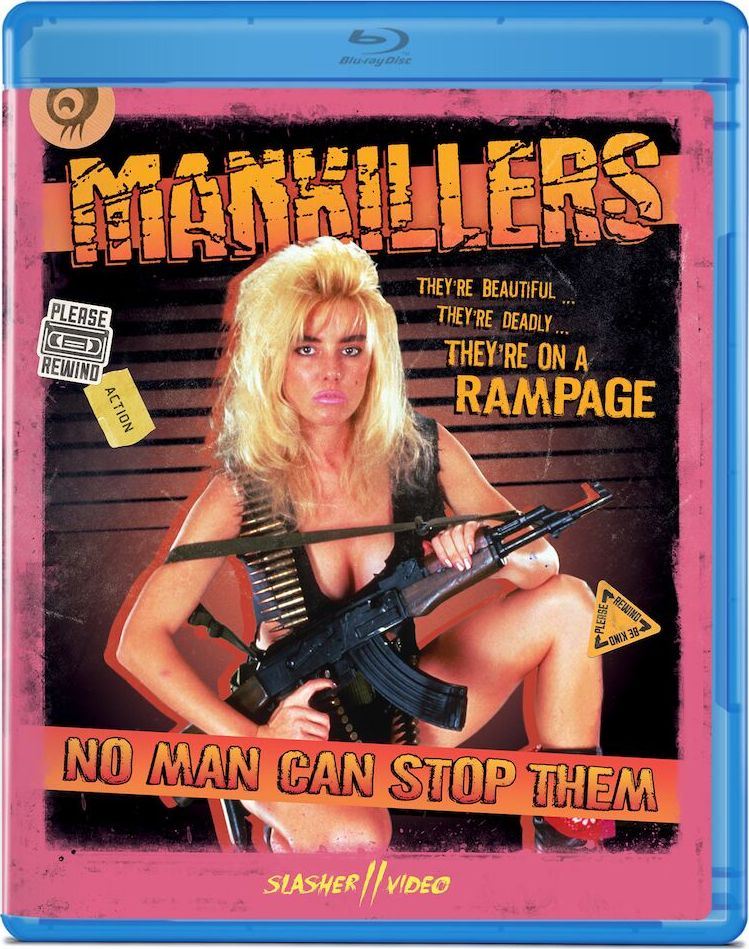 Mankillers is a low-budget SOV film from David Prior that will appeal to anyone who also enjoys Deadly Prey
Verdict
Mankillers isn't a good film, nor is it even important in cinematic history. But for an SOV '80s action flick, it's fun enough to warrant a watch for those interested in the inanity of said films, and Slasher//Video has brought the film to Blu-Ray with the best possible source.
Film
Special Features/Quality/Packaging
Reader Rating0 Votes
The Good
If you lived the '80s in the hair metal scene, this will help you reminisce
On par with Prior's other film, Deadly Prey
Transfer is fairly good-looking considering the SOV nature of the film
The Bad
Pretty much the whole movie if you can't get down to its stupid level
3.1
Fair
Buy
Amazon

Assuming you’ve ever seen a David A. Prior film, you know what to expect from Mankillers. Though Prior’s most notable works include Killer Workout and Deadly Prey, 1987’s Mankillers is another one of his earlier productions, shot back-to-back with Deadly Prey. The similarities are countless, and a double-feature of both films would both please fans of his body of work and kill off any excitement for an unsuspecting viewer. Mankillers is the equivalent of Deadly Prey with female protagonists instead of males, and Prior – crafting a plot about a female CIA operative tasked with bringing down a notable drug dealer with her suicide squad of freshly-released prison girls – offers up 80 more minutes of big hair, squib bullets, questionable frag grenade explosions, and a seemingly unending hair metal theme song called “Freedom” by Steve McClintock.

Mankillers stars Lynda Aldon as protagonist Rachael McKenna, a badass bitch who doesn’t always play by the rules because, as some of the male characters comment in the film, she’s basically crazy. The whole plot revolves around this one guy named Jack Mickland (William Zipp), who generally tends to get coked out, order his men to steal women off of the street (a la Deadly Prey, in which a very similar event occurs to that film’s protagonist), and sell them to people for drugs. Unfortunately for McKenna, she’s tasked with tracking Mickland down using a group of women recently given a free pass from prison (like Suicide Squad), and she’s got to keep her love for him in check so she can bring him in.

Prior uses a lot of the usual techniques for this film; it’s a low-budget affair shot on video, and it looks like Prior went out to a Guns ‘n Roses show and grabbed a bunch of women from the audience to be in the film. The explosions and props are relatively low quality, with grenades that explode like firecrackers and lots of squib bullet hits. However, Mankillers is actually a bit more adventurous than Deadly Prey, especially with a couple of car chase sequences that, while by no means of theatrical quality, do provide a hint of danger.

Also like many Prior films, Mankillers features an exceptionally stupid plot. Mickland’s a guy who’s perpetually high on coke, a man who employs some really dumb people as part of his entourage, and yet the American CIA has been having trouble taking him down despite their immense firepower, sophisticated tool set, and apparently limitless funding. Instead of, you know, sending a huge SWAT team after Mickland, the agency’s better idea is to take McKenna out of forced retirement, allow her to break eleven women out of prison, and give them all a bunch of weapons and military training so they can covertly get to Mickland.

Yeah – none of it makes any sense, but that’s a Prior film and one should expect the plot would use a lot of nonsensical exposition to explain the point behind a movie with a lot of bouncing boobs and explosions. And for what it’s worth, at least Mankillers sticks to that story, for better or worse. At only 88 minutes, the film is still too long for its own good, giving the viewer far too much footage of military training exercises where – I kid you not – a woman’s tits fall out of her shirt after she runs through a tire obstacle course. These are the things you will see in Mankillers.

The film’s finale, too, is a face-off that never seems to want to end, relying on some questionable character motivation to save McKenna from yet again being duped by Mickland. While Mankillers would at first seem like Prior is at least focusing on strong females as his main characters, in general they are mostly pawns and props in this movie where the song “Freedom” is featured more than some actresses.

Ultimately, I just want you to know what you’re getting into. If you’ve seen a David A. Prior film before and you enjoyed it – probably because you laughed at the ridiculousness of it all – then Mankillers will deliver much of the same. But if you’re looking for something more serious, more empathetic, more enlightening, you’re going to get lost in a sea of teased hair, skin-tight jeans, and pervy gratuitous shots of bosoms and bums.

There aren’t any special features on this Slasher//Video Blu-Ray besides a theatrical trailer and some English subtitles, so I’ll head right into audio and video quality. Of course, Mankillers doesn’t have the best quality because of its shot-on-video nature, and the source material for the film is most likely the best Slasher//Video could come up with. Overall, though, I’m fairly happy with the video quality – I think it looks slightly better than Slasher//Video’s previous release of Deadly Prey, despite some tracking issues that crop up in a few places throughout the film.

Similarly, the audio is much better than Deadly Prey, with no issues with muffled tones. It sounds crisp and clear, and that’s pretty much all anyone can ask for with this release since the film doesn’t use its audio for anything more than explosions and that repetitive “Freedom” track.

Overall Mankillers is worth picking up as a vintage action feature that should appeal to fans of similar late ’80s fare. However, I’m not sure how large a fanbase that really is.