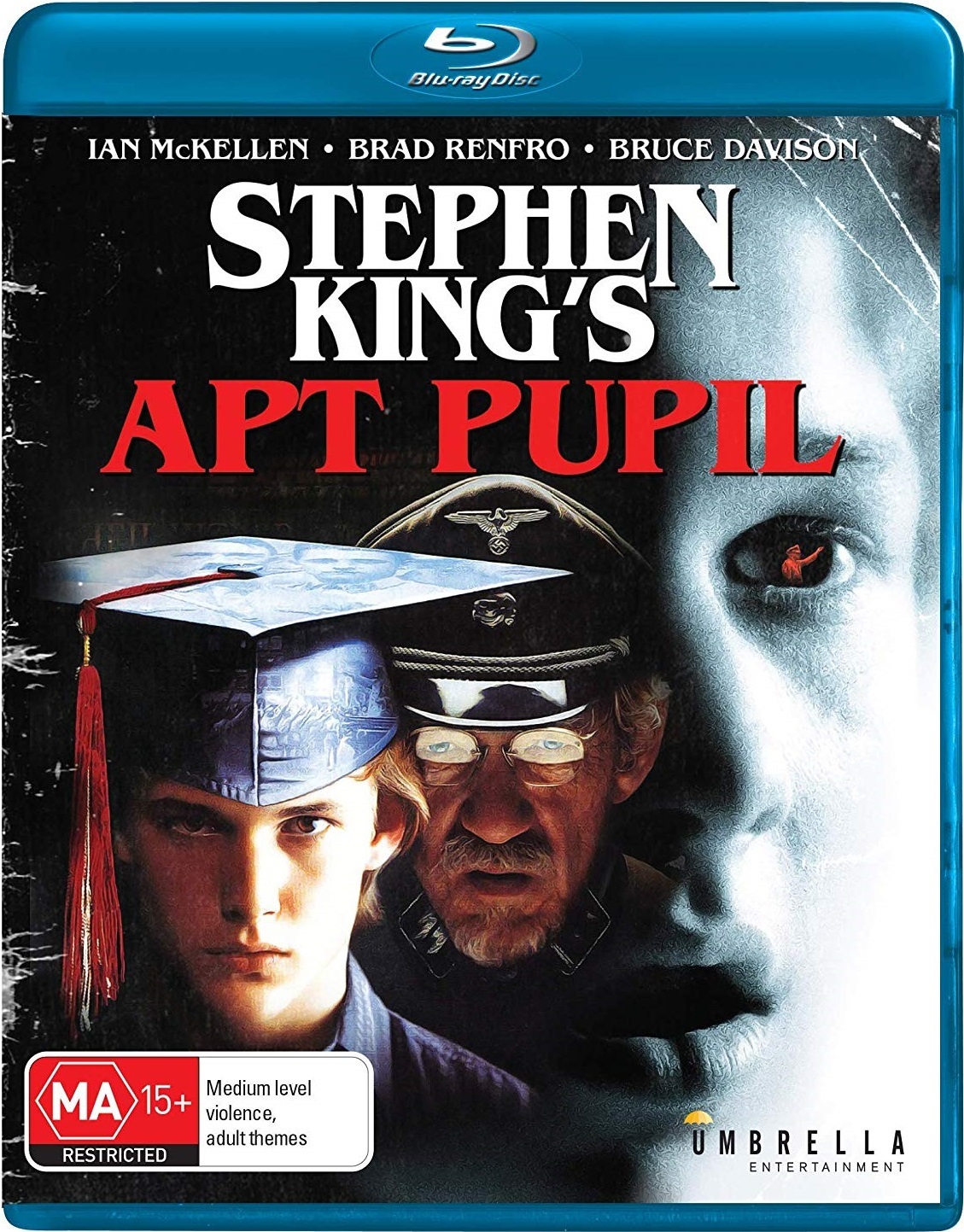 Past atrocity bubbles to the surface, within and out of the film

Apt Pupil was a novella published in 1982 in Stephen King’s Different Seasons, and eventually director Bryan Singer and screenwriter Brandon Boyce adapted it for the big screen in 1998. King’s story is, like many of those found in the Different Seasons anthology, not so much a horror tale as it is a suspense story about horrors – the subject matter, about an elderly Nazi war criminal attempting to live out the rest of his miserable life in secrecy only to be pushed back into his terrible past by a young teen, is a fairly controversial idea and one that questions the morality of both characters and the ability to reconcile past atrocities after decades have passed. In recent years, the film version of Apt Pupil has been tainted by more than its depiction of Nazism, something that certainly stands out watching this film in a contemporary context; however, for the purposes of this review, we’ll mostly deal with the film itself and briefly its troubling real-world issues.

Brad Renfro stars as Todd Bowden, a troubled senior whose research into Nazism leads him down a wild path that ultimately results in finding out the identity of an elderly man in town who used to be a Nazi. Kurt Dussander (Ian McKellen), renamed to blend into American society and avoid war crimes, has taken to chainsmoking and drinking the rest of his life away, apparently attempting to sidle away from his past life; but Todd, completely infatuated with Nazi torture stories, forces Dussander to relive those years in the form of stories and, later, reenacting his Nazi orders in full regalia. Ultimately, Todd is both disgusted and fascinated with the atrocities, to the point where he blackmails, and is then blackmailed, by Dussander to get more stories. Eventually, they both share a dark secret and neither can rat on the other without serious consequences.

Apt Pupil is a surprisingly effective story couched in historical drama. Singer explores one of the main facets of the human condition – curiosity – and highlights it within Todd’s continuing Nazi research. While the film does show Todd as somewhat troubled, for the most part he seems to be a model kid otherwise; he gets good grades before meeting Dussander, has a great home life, and appears to be pretty situated at school – something that his guidance counselor Edward French (David Schwimmer with a kickass mustache) notes once Todd’s grades begin to slip. But it’s the constant fascination of human death and destruction that begins to eat away at Todd, and it’s something that many people struggle with; certain individuals tend to have a morbid obsession with death, but it’s the knowing that changes them.

In this case, Singer explores that change in Todd and, subsequently, the impact that has on Dussander’s well-being. Though actual traumatic events are sporadic throughout Apt Pupil, the 111 minute runtime feels short thanks to great exchanges between Renfro and McKellen, and the film also explores the uncomfortable abusive relationship between the two. Overall, Singer’s approach to King’s subject matter emphasizes the ideas without completely adapting the story, and the disparities between the two certainly do help to make a better film. It’s too bad that Apt Pupil‘s various allusions to Singer’s own troubles – and there are many here, from the underage nude scenes to the unspoken elements of domination between a younger, potentially gay minor and an older man, and Renfro’s subsequent untimely death – leave a cloud over what is otherwise a successfully disturbing movie.

Umbrella Entertainment has released Apt Pupil on Blu-ray with a 1080p HD scan; like most Umbrella releases, this gives no indication exactly what type of transfer this was. Apt Pupil was released on Blu-ray previously by Image Entertainment and by my estimation, this HD transfer looks quite similar to screenshots of that release. One interesting element that has changed is the aspect ratio: Apt Pupil was originally shot a 2.39:1, but Umbrella has presented it in 2.35:1 which opens it horizontally just a bit. Otherwise, this looks extremely similar to the older Image transfer, and it features many of the same positives and negatives. The quality itself is pretty good, with a nice color presentation and a bit of chunky but unobtrusive grain. The darker areas of the film lack some clarity and that can be an issue in some the dream sequences; otherwise, depth of field is good and there’s very little damage here. Overall, it’s not a bad HD scan but could have used a new remaster.

The audio included here is a DTS-HD Master Audio 2.0 English track, and it sounds fairly good – dialogue is at a nice level and the score comes through quite well without any overwhelming loudness. However, Apt Pupil does have a previously released DTS-HD 5.1 track and it’s surprising that it was not included on this release. English subtitles are also included when selecting to play the feature.

Extras are nearly as limited as the previous Image Blu-ray, with an SD behind-the-scenes featurette that runs about six minutes, SD theatrical trailers, and – an addition to this release – SD TV spots. Also included is reversible cover artwork that removes the rating from the cover.

Umbrella Entertainment has offered a Blu-ray to Australia that is about on par with the 2011 Blu-ray release from Image Entertainment. It changes the aspect ratio slightly and provides TV spots, but loses out on a 5.1 audio track. While this is definitely not one to import and not worth double-dipping if you’ve already got the previous Blu-ray, it’s a good release for those just looking to own Apt Pupil for the first time.

Be sure to check out our gallery for more screenshots from this release.

Apt Pupil is a thrilling tale about past atrocities that can come back to the surface decades later, clouded by a director's own accused criminal past. Umbrella Entertainment's Blu-ray is basically a re-release of Image's 2011 Blu, but it's still good for a first-time pickup.
Film
Blu-ray
Reader Rating0 Votes
4.3
Hosting screenshots is expensive. If you want to see more galleries, consider donating!