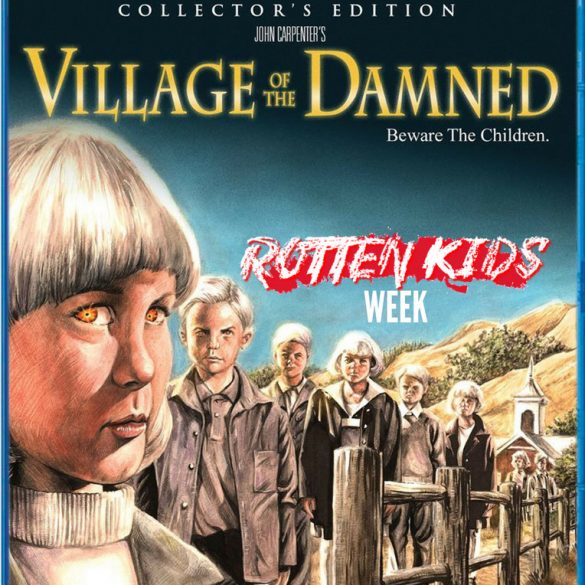 After a blackout period in a small town, the residents of Midwich wake up and find that most of their female inhabitants are pregnant with rapidly growing fetuses. Dr. Alan Chaffee, an OB/GYN in the town, discovers this weird scenario and tries to figure it out with the help of Dr. Susan Verner, a government-appointed scientist sent to study the little shits. Soon, these kids are grown into something terrifying with telepathic powers and a hive mind. They’re hell-bent on studying human nature, but what is their ultimate goal?

Village of the Damned Film Review

John Carpenter’s Village of the Damned is a remake that makes sense for the director. Like The Thing, the film is based on a classic horror film from a bygone era, a snippet of the past that perhaps influenced Carpenter as a director. Small town life is key to the film’s plot – the isolation of Midwich and the close-knit community of gossipy individuals encourages the townspeople to keep the secret about the multiple pregnancies in town from the rest of the world; that communality is an idea that Carpenter explored more than once in his previous outings, and especially in his most popular, Halloween. Still, it’s surprising that Carpenter isn’t able to capitalize on his experience with these sorts of plots, because Village of the Damned is mediocre at best and often cheesy at its worst, especially two decades later.

Christopher Reeve stars as Midwich’s resident clinician/GYN, Dr. Alan Chaffee. During a fun fall festival in Midwich, the entire town is put into a deep sleep for hours; upon waking, the following days reveal most of the women in town are pregnant. Dr. Susan Verner (Kirstie Alley) is put on the case by the government, experimenting with the women and offering them a federal stipend in exchange for unlimited access to testing both pregnant mothers and their fetuses. And, without much thought, the families consent, only to find that their children are silver-haired aliens bent on conquering their human counterparts with telekinesis and the ability to read minds.

The film’s opening establishes its small town setting, also introducing the audience to a number of characters that will quickly become less important as the mass impregnation begins. Carpenter’s exploration of Midwich is notable, though, with clearly defined borders and a promise that the film’s focal point will not stray from the initial village of the title. Reeve is likable enough as Dr. Chaffee, a doctor for the people who also has a stake in the events – his wife Barbara (Karen Kahn) also gets pregnant, and eventually their child Mara (Lindsey Haun) becomes the silver-haired leader of the children, able to harness her telekinesis into a force that threatens the entire population.

But Carpenter’s direction often takes odd deviations, moving through time quickly without stopping to develop his characters except in small bursts. Chaffee seems like the protagonist, but often Village of the Damned transitions to Jill McGowan (Linda Kozlowski) – who lost her husband during the blackout – or Dr. Verner without doing much characterization. Part of that has to do with how quickly the film moves through time; Carpenter leaves little room for development of the children/alien abominations until they’ve grown older, and at that point they’re a lot less creepy.

Village of the Damned leaves the aliens’ motivations fairly vague, and while that’s meant to make them scarier and more mysterious, the film often suffers from its condensed timeline. Whole moments of the film seem to meander directionless, throwing in a telekinesis attack here or there to maintain the horror. While some of these scenes truly are suspenseful – that horrifying moment where Barbara is forced to shove her hand into a boiling pot of water repeatedly has stuck with me since childhood – they’re dispersed too much, lacking a driving force as Carpenter attempts to build David (Thomas Dekker) into a loving being who breaks from the rest of the children.

It’s hard not to see Village of the Damned as a bit sloppy, going through the motions expected from a film about evil children. There’s enough here to set it apart from others like Children of the Corn, but the quick movement through time doesn’t produce authentically scary kids; instead, the film tries to force that facet on the viewer. There’s some attempt to comment on abortion here as well, but that comes and goes without much emphasis; besides the choice that Dr. Verner gives the women on whether to terminate the pregnancy or to carry it to term for money (with a clearly vocal man expounding, “That’s killin’ babies!”), Village of the Damned doesn’t make a strong case one way or the other.

What’s left is a remake that doesn’t expand upon its predecessor’s ideas too much. Carpenter takes liberties in the modern era with violence, but ultimately Village of the Damned is a tame and often underwhelming experience with too much fluff. It’s unfortunate that this village often feels devoid of the damnation the title promises.

There’s actually quite a bit including the aforementioned boiling water scene, but it’s not gratuitous or very gory. Still, some things will make viewers squeamish.

Nope, Kirstie Alley does not take her clothes off. A shirtless Christopher Reeve, though.

Village of the Damned Blu-ray Review

Scream Factory has released Village of the Damned as a Collector’s Edition Blu-Ray, meaning it gets special treatment with new custom artwork and a few more features than the usual releases. The film is presented in 2.35:1 aspect ratio and looks great – no issues with video that I can see, and colors pop (especially those vibrant red eyes that the children sport). No flaws with black crush or damage.

Audio comes in 5.1 DTS-HD Master Audio, which sounds quite nice, although Village of the Damned doesn’t sport a particularly memorable soundtrack like some of Carpenter’s other films. However, the presentation is good and also comes with English subtitles.

Bonus features are where this Blu-Ray really shines. Surprisingly, there’s no audio commentary included on this release. But a 49-minute documentary on the making of the film, including interviews with John Carpenter, Sandy King, Karen Kahn, Greg Nicotero, Thomas Dekker, and some of the other children makes for a nice extra, a comprehensive overview of behind-the-scenes details and discussion about Universal’s manhandling of what many feel is an unfinished version of Village of the Damned.

Also included, as Scream Factory has been wont to do of late, is an episode of Horror’s Hallowed Grounds that finds the crew heading to various locations in Village of the Damned. It’s a nice 20 minute featurette that visits quite a few different areas. A 45-minute discussion with actor Peter Jason features anecdotes about a number of different Carpenter films that Jason worked on, including They Live, Village of the Damned, Prince of Darkness, Escape from LA, Body Bags, and Ghosts of Mars. It’s a very interesting feature that, while not exactly related to the film, adds a lot of value.

Vintage interviews (seemingly taken from an EPK of some sort) are also included, with John Carpenter, Christopher Reeve, Linda Kozlowski, Mark Hamill, and Kirstie Alley. This is a lengthy feature and also includes behind-the-scenes clips, and it allows the viewer to see some interviews with people who weren’t around for the new making-of featurette.

Theatrical trailer, gallery, and reversible cover art round out the package, making this a fully-stuffed disc that is certainly worthy of the Collector’s Edition label.