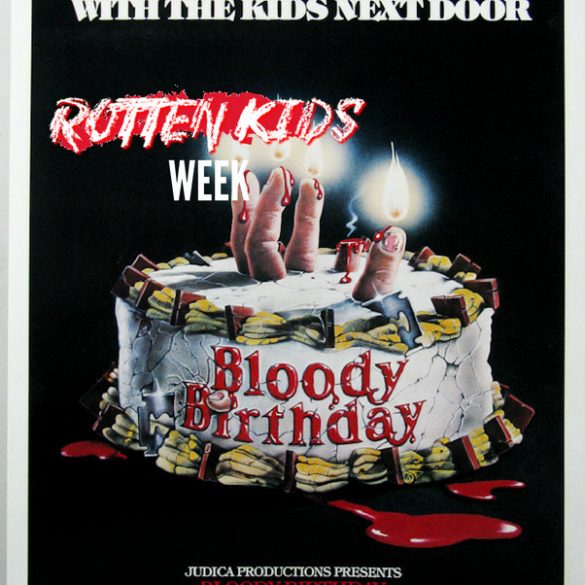 Lacking consciences because they were born during a solar eclipse, a trio of 10-year-olds embark on an indiscriminate killing spree.

If for some reason you choose to have a child and it’s born during a solar eclipse, immediately punch the baby and run for your life, cause that sucker is going to kill you and everyone you know. You’ve been warned folks, you’ve been warned…

Now here’s a movie that probably wouldn’t be made today, what with our PC-centric attitude towards violence and mayhem in the movies. With the killings being done by children, you would have parents shitting their pants over getting this film banned worldwide. As for me, I have nothing against a little violence, even against or from children in movies. If early teens, older teens, adults and old people can kill or be killed, what makes kids safe? Now, I’m not talking about violence for violence sake, I think there needs to be a point behind the film and its happenings. As for Bloody Birthday, that point is a solar eclipse. The three children born during the eclipse have no feelings and one day, leading up to their 10th birthday, they decide to go on a rampage. (Okay, I admit the point is paper thin.)

The acting from our three killer kids is fantastic. They’re creepy, eerie and oh so evil. They’re like a young Michael Myers (you know, from the good film, not the crappy Rob Zombie one). For the most part, I was rooting for them. I mean how you can not when one of their victims has sex in the back of a van and decides to “check out that noise” butt naked. Those people deserved it. They basically checked off every cliche in a horror movie. As for the other acting, not one person was awful, a shocker in an early 80s movie. Something peculiar was Michael Dudikoff showing up randomly in the film. His role is never clarified, although he might’ve been the boyfriend to one of the teenagers in the film, but not once was he kicking ass as an American Ninja. For shame Bloody Birthday, for shame!

I should mention that the music in this movie seems to be a mash-up of every horror film known to mankind. One time you’ll think it’s Friday the 13th, next it’s Psycho. No wait, now it’s Jaws. Nope, it’s Halloween.  Bloody Birthday’s music, thy name is ripoff.

Conclusion time! Bloody Birthday isn’t an overly graphic film. No real harm comes to any child. It’s mostly teenagers that are biting the bullets here. That for me was a disappointment, as I thought there would be more carnage, more mayhem and more murder. There are moments where the violence is there, but there wasn’t enough to make it shock worthy. This film is an acquired taste, one where you can’t mind children doing non-children shenanigans (unless they were born during a solar eclipse that is). I say give it a watch if you want to see something different and something that is rarely made nowadays.

As I’ve said in my review, Bloody Birthday isn’t precisely bloody or violent, but some moments will make gorehounds grin. We have some shovel beatings, stranglings, and one instance of an arrow through the eye socket. Most kills, however, are shown off screen, which is a damn shame.

We have some beautiful looking boobies to gawk off, or if you’re so inclined, a man’s bare booty to goggle. Nothing we all haven’t seen before, but still very much welcome