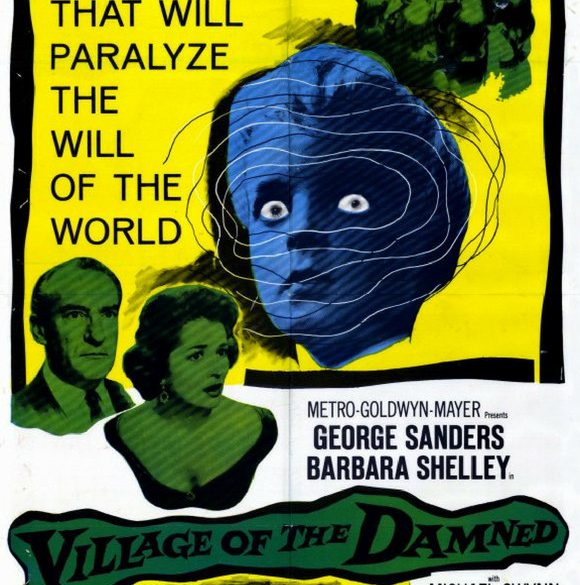 The village of Midwich is in a bit of a predicament after the entire community loses consciousness for a few hours. When they awaken, they carry on with life as though nothing had happened, but eventually most viable women in town become pregnant with rapidly growing fetuses. Eventually these children are born and learn at an intense rate, establishing a hive mind that can understand concepts shown to individuals. Their plans are mysterious, their telepathic powers dangerous – can anything stop these murderous rotten kids?

Village of the Damned Film Review

Long before The Omen or The Exorcist existed, long before John Carpenter attempted to remake it, Wolf Rilla’s Village of the Damned scared audiences with its depiction of rotten kids terrorizing a small English community. The film itself was influenced by The Midwich Cuckoos, a novel by John Wyndham written in 1957, named for its village that would hereby be damned. What was the impetus of ’60s era viewers, and why were they so frightened of children? Exploring Village of the Damned‘s plotline should tell us.

Rilla’s direction is swiftly paced and follows a fairly linear course of events that Wyndham sets up within his novel. Excising some of the more scientific explanations for the children’s development, Village of the Damned simply uses the initial setup of a blackout period in Midwich to help justify how the mass pregnancy originates. It helps that he has a couple of important characters to help narrate the science behind it; Gordon Zellaby (George Sanders) is a prominent scientist who finds that even his wife Anthea (Barbara Shelley) has come down with a good old case of spontaneous pregnancy, and his brother-in-law Alan Bernard (Michael Gwynn) is a major in the Army, so we know the public is in good hands when Bernard and Zellaby are advised to investigate this new development and analyze it for a potential threat.

The opening blackout period is surprisingly chilling, a feat that’s accomplished by Village of the Damned‘s lack of bombastic music during the quiet period. It shows all of the town’s residents either passed out or hunched over whatever they were working on, and the implication is quite terrifying. Then, once the kids are born, Rilla’s focus shifts to how their presence impacts the townspeople. The kids might not seem scary at first, but the citizens’ reactions to them help the audience understand their malevolence. It’s an aura that’s felt rather than shown, and it adds to the eerie quality of the film – and the special editing to add the children’s odd eyes also helps.

Contemporary viewers might find Village of the Damned a bit slow, but it’s actually relatively active throughout as the government attempts to figure out what to do with these evil children. The pseudo-science behind the film is pretty believable too, culminating with a satisfying ending that circumvents the children’s powers. It’s really the best way to conclude the movie, and Rilla creates a strong, memorable tale that in some ways acts as a metaphor about youth overtaking their elders – and also, you know, aliens and the threat of foreign invasion.

Not heavy on the violence but there is an implied but not shown suicide, a car crash, and a few other milder moments.

This is 1960 so all you get is Barbara Shelley’s slim figure in a dress.