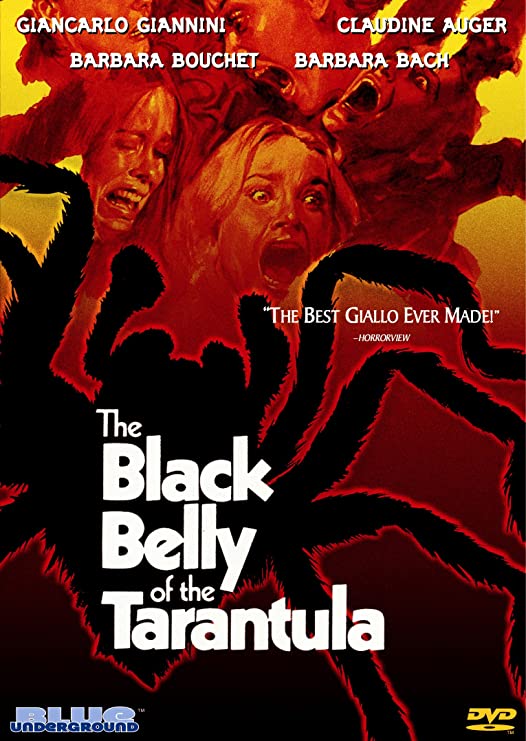 VIDEO VAULT: The Black Belly of the Tarantula (1971)

Generally speaking, when people think of Italian horror cinema, only a handful of its most prominent figures will immediately spring to mind. Primarily, these would be the legendary men who work behind the camera – the ones credited with creating some of the very best that the genre has to offer. Understandably, names like Fulci, Argento, and Bava tend to dominate the conversation whenever the subject arises. Given the sheer significance of their contributions, this is a situation that makes perfect sense. I mean, have you seen Suspiria? Have you ever gotten the chance to watch Black Sunday or Zombie 2? They are incredible films.

But I digress. As much as I would like to gush over the merits of the big three, that is not the reason I am writing this review today. No, this time around, I’m here to discuss the work of another, lesser-known director.

Although he isn’t as widely recognized as his peers, Paolo Cavara definitely deserves to be acknowledged. The man is no lightweight; he has been responsible for numerous pictures throughout his career. Whether filling the role of writer or director, he has undoubtedly played a pivotal part in bringing an impressive amount of projects to fruition. Although not very many of them have risen to acclaim outside of his native Italy, there is one film in particular that stands out above the rest. It is this example that ultimately serves as Cavara’s legacy – his tour de force.

The Fine Art of Spinning Webs

Cavara’s 1971 crime picture, The Black Belly of the Tarantula, is widely considered by experts to be one of the best Gialli films ever made. I must admit that, after analyzing the movie, it was easy to ascertain why this is.

If I were to describe the film using only one word, it would have to be stylish. Giallo is a genre that is renowned for its striking visuals, and this title is no exception to that rule. The cinematography is extraordinary, just as one would expect it to be. Cavara and his team do an outstanding job of using different camera techniques to emit a persistent feeling of chaotic tension that haunts the majority of its 98-minute running time. As far as aesthetics are concerned, they truly nailed it.

From an audio standpoint, the film is passable. While the musical score is not necessarily of an iconic caliber, it still manages to be quite potent at times. The composer, Ennio Morricone, has certainly done far superior work for other productions. Although I would have expected better things from the man who provided us with the theme from The Good, The Bad, and The Ugly, I also wasn’t terribly disappointed in it. In summary, I can either take the music or leave it. I really don’t feel strongly one way or the other.

The Poisonous Perils of Inspector Tellini

Critics who are opposed to Giallo will often cite the storylines as being common points of contention. They catch a ton of flak for their irrefutable tendency towards being convoluted and hard to follow. However, in The Black Belly of the Tarantula, this is certainly not the case. The plot is surprisingly legible, at least when being compared to others in the genre.

The film follows the events that transpire after a young woman is murdered inside her home by an unknown assailant. In the ensuing investigation, a sordid tale of sex, lies, and blackmail begins to unfold. Soon, the police inspector at the center of the incident finds himself pulled into the thick of the madness. Will he be able to find the maniac who is committing these grisly crimes before it’s too late? Will he end up being the hero or just another victim for the pile? You’ll have to watch the movie to find out.

The Black Belly of the Tarantula is an example of Giallo at its finest. While it may not be the most celebrated film of its kind, it remains one of my top suggestions for any true lover of the genre. If you have not seen it, then I strongly recommend that you do, as soon as you possibly can. Trust me, you’ll be glad that you did.


Final Score
The Story
The Visuals
The Audio
4

You can view the trailer for The Black Belly of the Tarantula, courtesy of MovieTrailerFan 1980, below.

If you enjoyed this article, then please feel free to check out more. You can see all of our retrospective reviews, here.