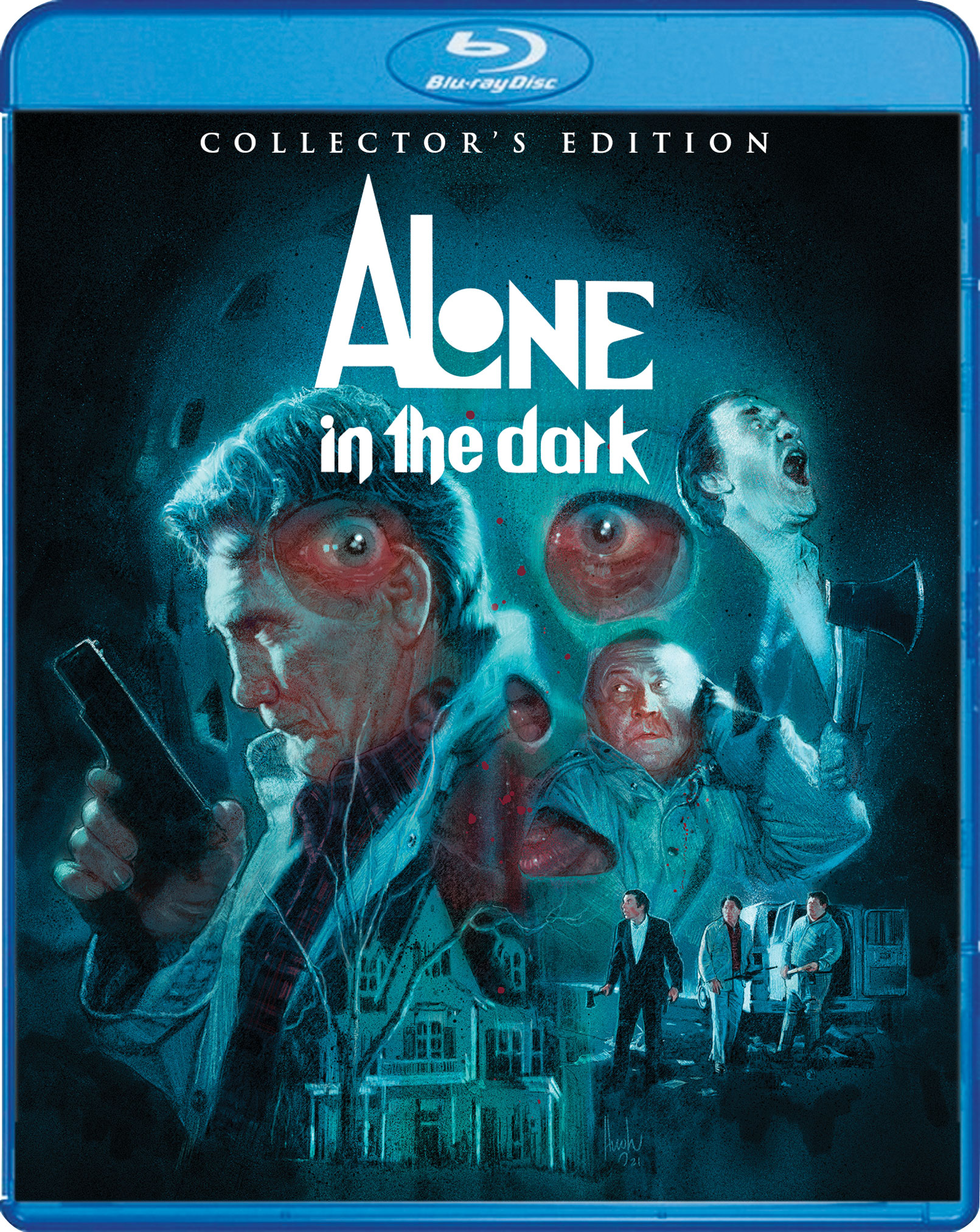 You'll be seeing Martin Landau's smile in your dreams

Jack Sholder’s Alone in the Dark hit fairly early in the ‘80s slasher craze; Halloween and Friday the 13th had already come and gone, setting a formula that this 1983 film intentionally ignores. Rather than opting for a familiar scenario involving sex-crazed teens in a particular setting – or set around a holiday of some sort – Alone in the Dark ups the ante with multiple killers and an older cast of characters. And unlike Just Before Dawn, the film doesn’t attempt to hide its killers’ identities until the very end – the viewer is privy to all of this information throughout (for the most part), making this an interesting entry in the subgenre.

The film follows Dan Potter (Dwight Schultz), a psychologist who has just begun work at Leo Bains’ (Donald Pleasence) institution for the insane. Bains has some… eccentric ways of dealing with his patients, especially the four “psychopathic” residents on the institution’s third floor – including Jack Palance as Frank Hawkes, Martin Landau as Byron Sutcliff, and Erland van Lidth as Fatty Elster. There’s also the faceless Bleeder (Phillip Clark) who gets so excited during his kills that he begins to bleed profusely from his nose. These killers are kept in only by an intricate electrical system, and that should be the audience’s huge clue that things will quickly go haywire when a blackout wipes out the grid in the surrounding areas.

As slashers go, there’s very little mystery involved throughout the entirety of the film. Sholder proudly wears his influences openly – see the Bleeder popping on a hockey mask early on during his escape – but Alone in the Dark often deviates wildly from the usual formulaic approach, to its benefit. One of its most effective moments comes when Fatty sneaks into Potter’s house and begins to interact with his young daughter; it’s a tense moment where the implication of pedophilia generates a somber atmosphere, only to thankfully dispel the audience’s grim expectations later.

Alone in the Dark’s four killers all have some slight characterization to them, but truthfully the film tends to define them in only the broadest of strokes. Landau is excellent as the demented preacher, who seems to follow his own Old Testament moral code; his extravagant grin makes for effective facial expressions. Palance’s Frank is probably the most concrete of the bunch because of his wartime PTSD; as the leader of the group, he ultimately commands the other three to do his bidding, fuelled by misunderstanding and hysteria.

While the film has a particularly intriguing setup and a number of suspenseful moments, Sholder has a tendency to linger too long in specific scenes. The film’s finale attempts to amp up the tension with the possibility of attack from all angles as Potter and his family sequester in their house, but there are too many quiet moments to sustain the mood. These ultimately make the runtime feel long despite being a concise 90 minutes.

However, Alone in the Dark is a strong slasher because it operates on a significantly different wavelength from its predecessors and contemporaries. It has a strong cast, a number of compelling moments, and its multiple killers add new depth to the attack scenes. The sole twist killer reveal probably won’t surprise most veteran slasher fans, but it’s a good attempt anyway. Ultimately, Alone in the Dark has good reason for its cult slasher status, but note that it is on the slow burn side.

Finally Alone in the Dark gets a Blu-ray release, coming from Scream Factory as part of their Collector’s Edition series. This edition provides a new 2K scan of the interpositive. The results are pretty good, though the IP source does show some consistent softness throughout. However, most scenes fare well with a medium-bodied grain and good contrast, along with vibrant color saturation that does push pink at times especially on skin tones. This film has had a previous HD transfer but Scream Factory’s does seem to improve on this; fans should enjoy this new transfer and it is great to finally have this slasher film in physical form.

Audio is presented with a DTS-HD MA 2.0 stereo track that sounds good, with a strong bass presence and consistent dialogue volume. The film’s quiet moody score is also well-represented with this track. English subtitles are included.

Extra features include a few new offerings, the most robust being an interview with director Jack Sholder that runs for almost 40 minutes. For those looking for a dose of information about the film, this is the extra to immediately throw on. Also new to this release is an interview with a few members of the Sic F*cks who discuss their memories of performing during filming. There’s also a location featurette that revisits some iconic filming locations. A new audio commentary with film critic Justin Kerswell and historian Amanda Reyes provides additional context and information about the film’s actors and history.

Also included are a number of previously-released bonus features: an audio commentary with Jack Sholder, an interview with Carol Levy, an archival interview with the Sic F*cks, and trailer, TV and radio spots, and still galleries.

This package also comes with reversible cover artwork and a slipcover in standard Collector’s Edition fashion.

While some contemporary viewers may find Alone in the Dark a little slow, its contribution to slasher history is certainly apparent. Scream Factory presents a great new release with solid A/V and a few new extras to slake fans’ thirst for this movie on disc. 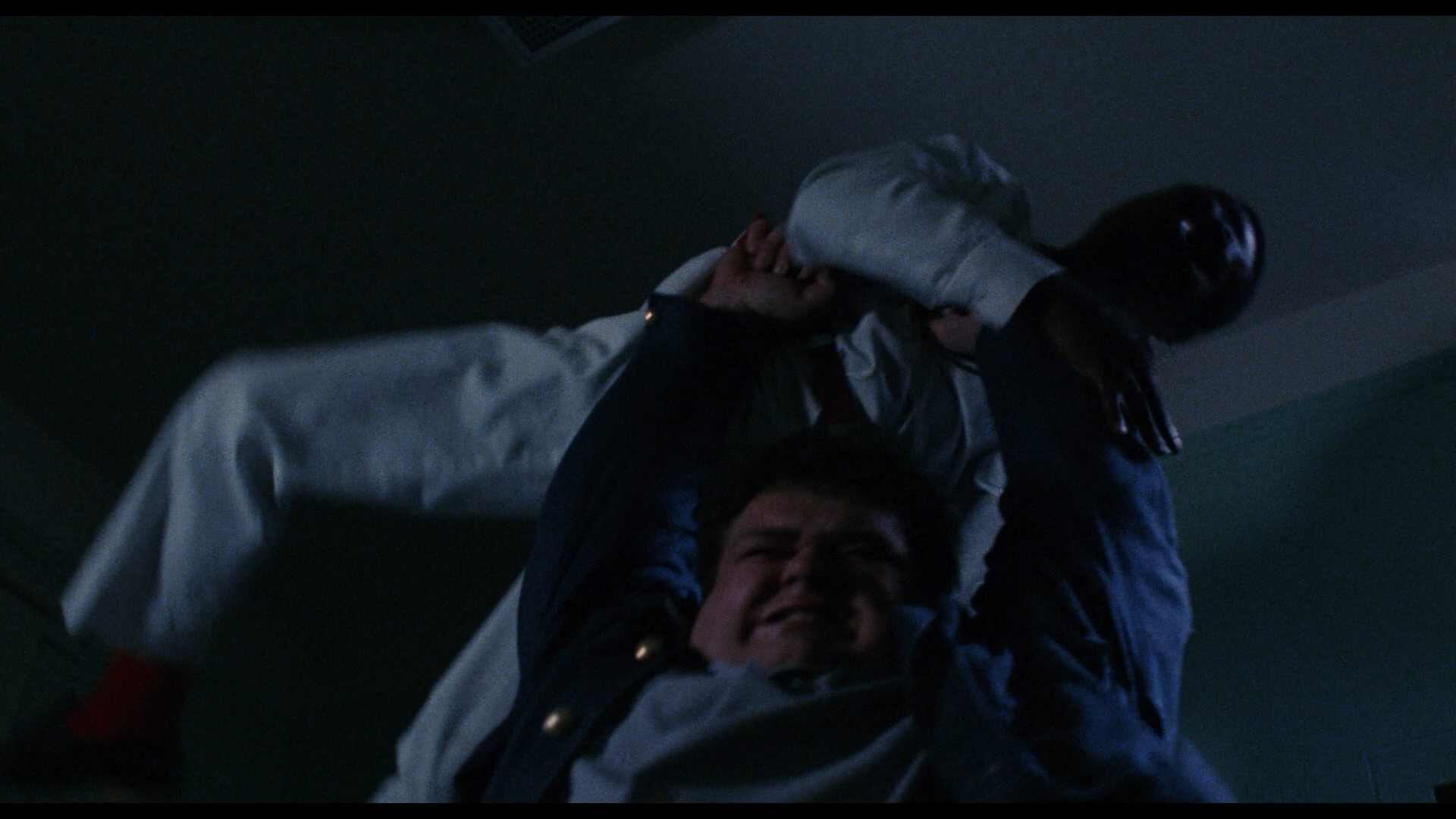 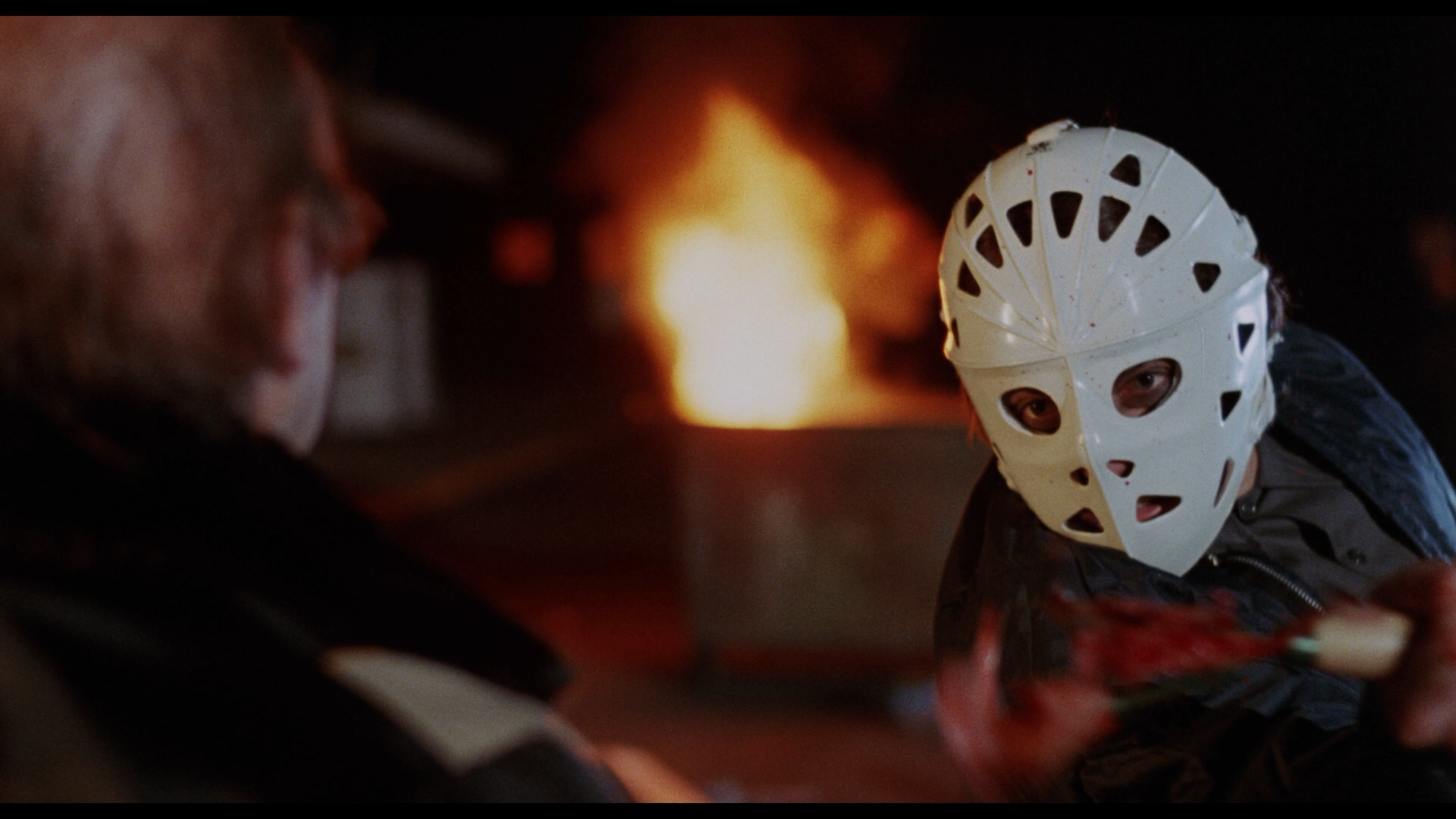 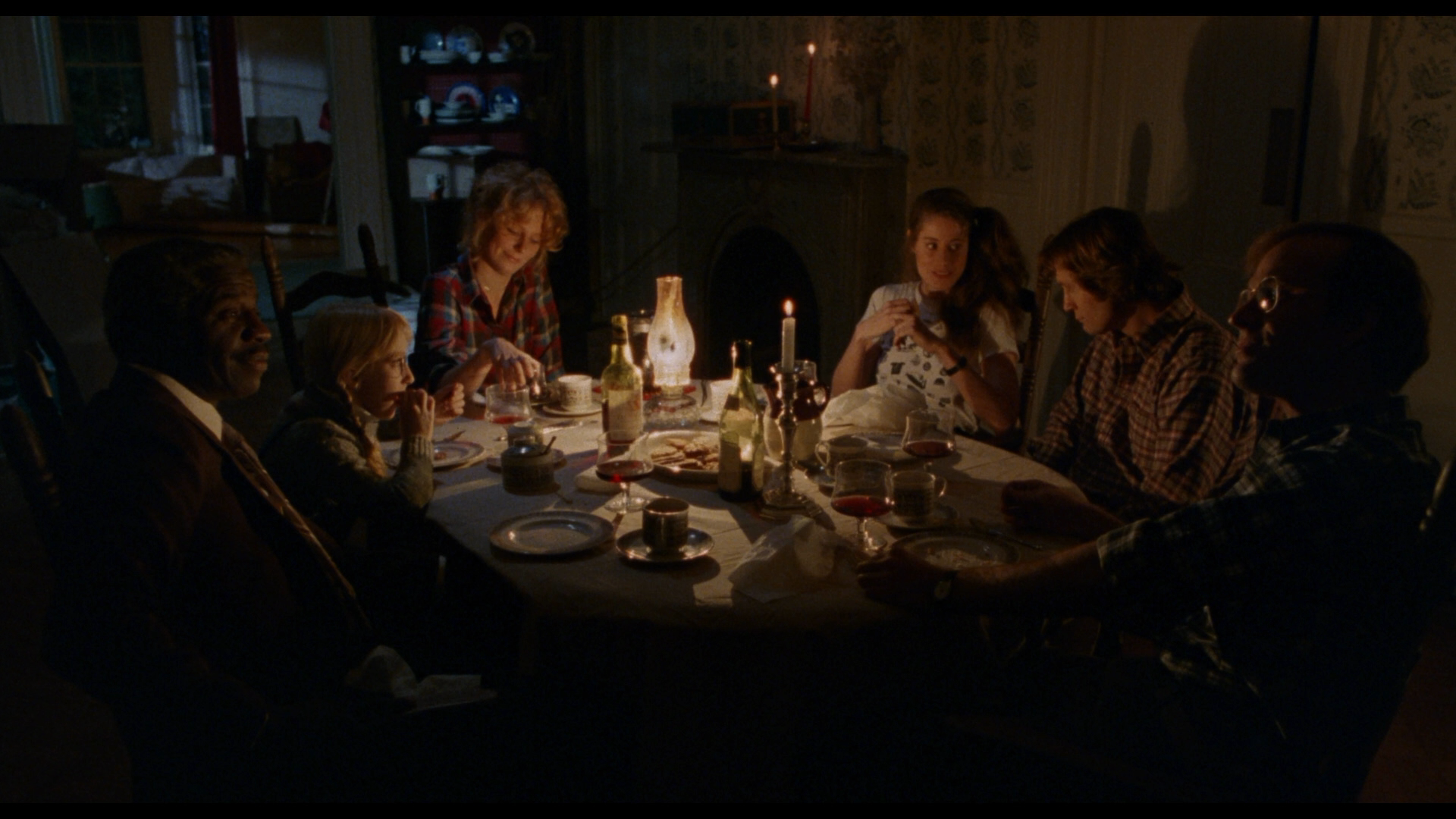 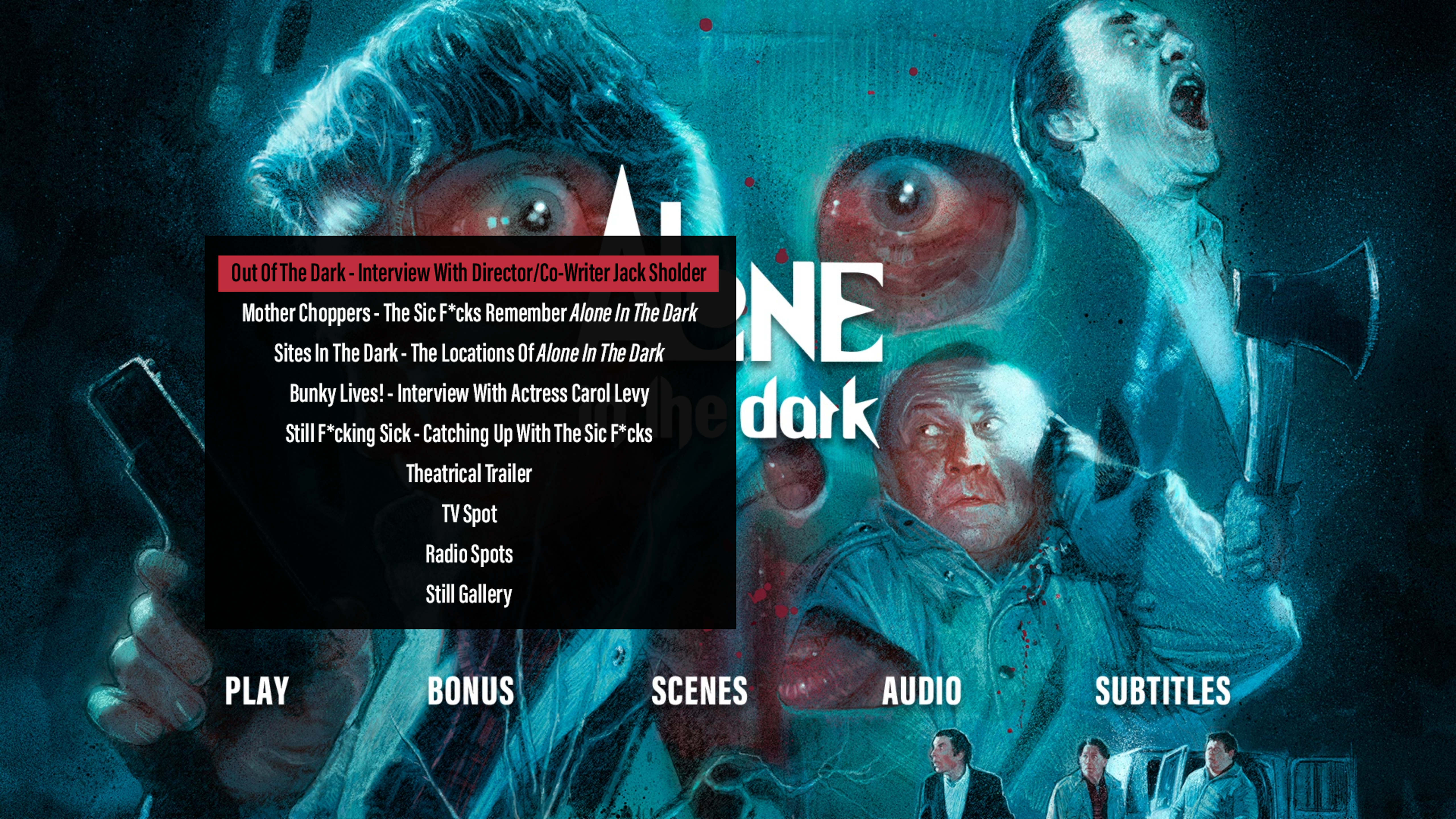