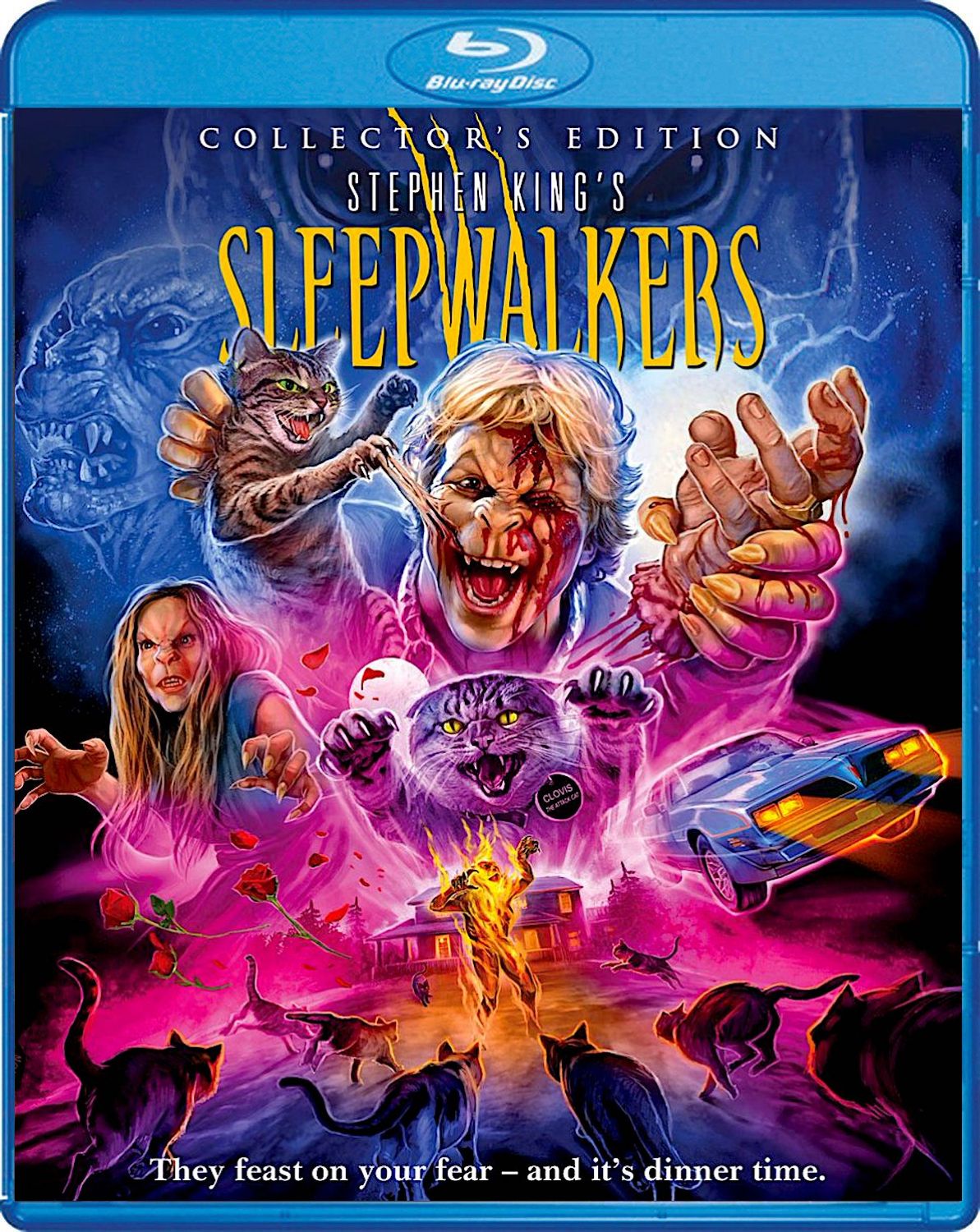 Stephen King may be well-known for his novels and film adaptations, but rarely does he get the chance to write a film script that doesn’t cull from his previous works. But Sleepwalkers, the 1992 supernatural creature film directed by Mick Garris, is just that, a screenplay that was written specifically for film. However, King may not look back fondly on this movie about a mother-son pair who move to a new location to try to suck the souls out of young women’s bodies.

The film stars Brian Krause as Charles and Alice Krige as Mary, two sleepwalkers who are trying to find sustenance after moving to a new location to escape the prying eyes of their arch-nemeses – cats. Yes, that’s right – these soul suckers are afraid of creatures of the feline variety, and they’re constantly hunted at every turn. When Charles finds young Tanya (Madchen Amick), he sort of falls in love with her despite his incestuous relationship with his mom and his promise to feed Tanya’s soul to her.

Sleepwalkers is certainly a strange beast, and it’s not altogether apparent whether this is due to Garris’ direction or King’s script. Whatever the case, the film is tonally off the wall, starting out very sympathetic to the sleepwalkers – including a heartwrenching “fictional” story delivered by Charles about being constantly hunted – and then riding off the rails in its second half. Garris follows Charles and Mary closely – some might say uncomfortably closely – and first attempts to characterize Charles as a well-meaning kid who is forced to suck souls. As the film progresses, and as Tanya learns more about Charles, his good nature suddenly changes into a terrible one-line spouting caricature.

It also means that the slower-paced opening – one in which we get a scene of Amick dancing to “Do You Love Me?” – disintegrates once the action ramps up in the second half. Garris includes car chases, crazy cop antics, a scene wherein King meets up with masters of horror like Clive Barker, Tobe Hooper, and John Landis, and a lot of cat-on-sleepwalker action. None of it truly explains much of anything, and it’s all nonsensical without leaving much for the viewer to ponder.

Liking Sleepwalkers will certainly depend on the viewer’s penchant for over-the-top cheese and TV movie-esque quality. This is not Garris’ best film nor is it King’s best story; instead, it’s light, corny, with a hint of playful fun buried under some bad writing and questionable special effects.

The Scream Factory Collector’s Edition Blu-ray does not sport a new transfer; this seems like the same one from the 2012 Blu-ray release of the film. While that may be something of a disappointment for those looking to upgrade, the video quality was already quite good on this transfer with vibrant colors, good clarity, and very little damage or flaws. As such, Scream Factory most likely deemed it unnecessary to do an upgrade.

Audio comes in both 5.1 DTS-HD MA and 2.0 – neither have any issues to mention, though the 5.1 dialogue seems a little low at times. English subtitles are also included.

Quite a few new bonus features have been assembled for this release since the previous Blu-ray was barren. First is a new audio commentary with Mick Garris, Machen Amick, and Brian Krause. All of them are fun and excited to talk about the film. Likewise, they also get their own interviews; Garris talks alone for about 15 minutes on the work behind-the-scenes and how excited he was to work with Stephen King, while Amick and Krause share a dialogue about their love interests in the film that’s really fun to watch (also 15 minutes). Alice Krige gives a 15 minute discussion about her work in Sleepwalkers as well as some of the other roles she’s had including plays and Shakespeare productions, and another 15 minute interview with Tony Gardner and Mike Smithson talks about the special effects and makeup work to make the sleepwalkers.

Also included is a vintage behind-the-scenes reel at 6 minutes, theatrical trailer, TV spots, and still gallery. The package also comes with a slipcover and reversible artwork.

This is a good Blu-ray that, while not sporting a new transfer, does collect a lot of new extra features for those interested. Enjoyment of Sleepwalkers certainly required, however, to make this worth your while.

Sleepwalkers is an interesting, if pretty flawed, film from Mick Garris and Stephen King, and it requires a certain viewer to appreciate it. The Blu-ray, though, is quite good; no new transfer but a slew of new features.
Ryne: Film
Ryne: Blu-ray
Michael: Film
Michael: Blu-ray
Reader Rating0 Votes
3.9
Hosting screenshots is expensive. If you want to see more galleries, consider donating!