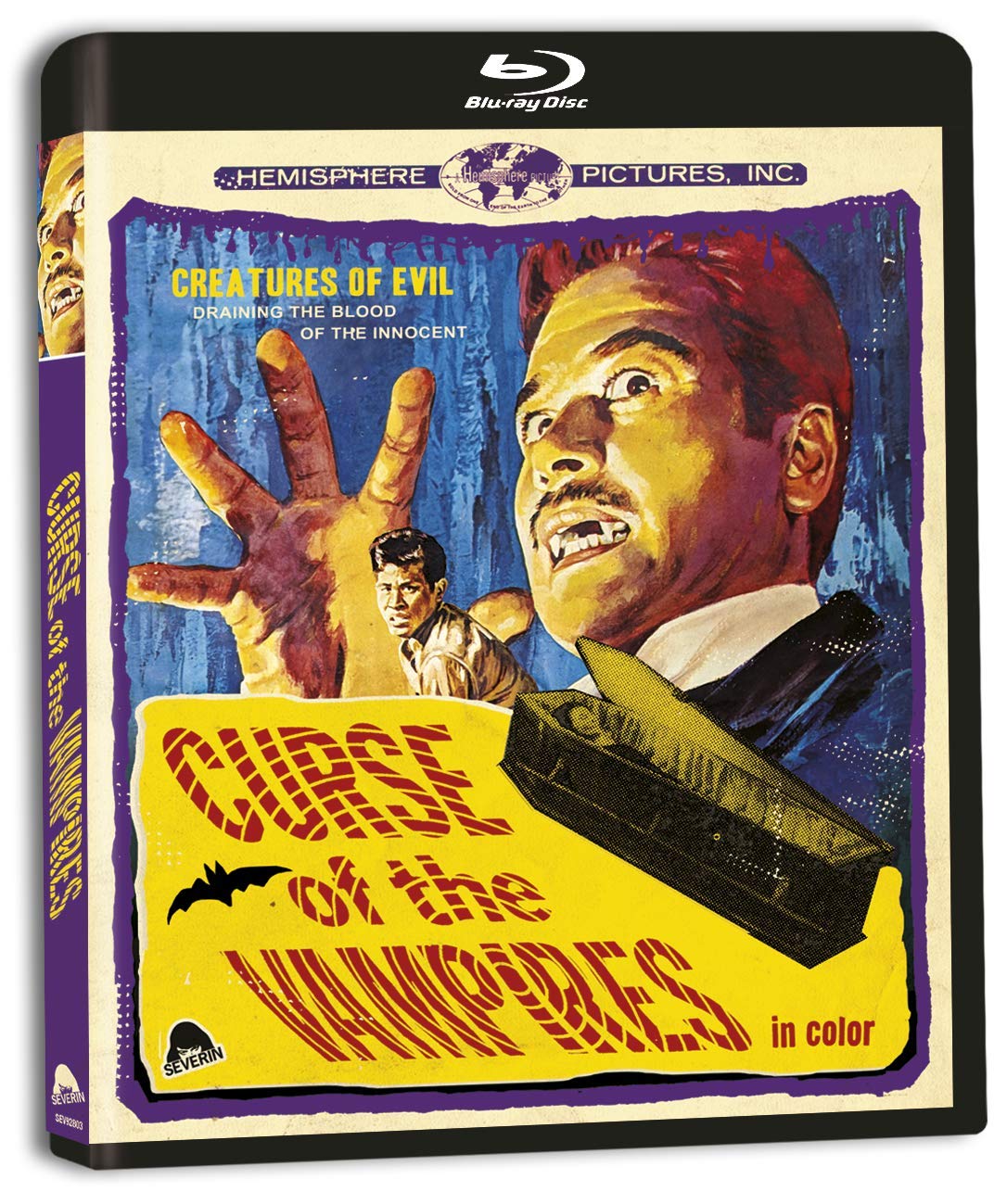 This review is one part of Severin Films’ Hemisphere Box. We will post a full round-up of the box when all film reviews have been completed.

1966’s Curse of the Vampires, also known as Blood of the Vampires and its original title Ibulong mo sa hangin, is a Filipino film from director Gerardo de Leon and part of the Hemisphere Entertainment line of films; though it follows 1964’s very similar The Blood Drinkers (also by de Leon), its only a sequel in theme alone. The film follows the Escudero family, a rich trio including brother Eduardo (Eddie Garcia) and sister Leonore (Amalia Fuentes) dealing with the death of their mother and their ailing father. Both Eduardo and Leonore are close to marrying significant others, but their plans are dashed when they find out their father has been keeping their supposedly dead mother chained up in the basement. You guessed it: Mom’s cursed with vampirism, and that means the whole family is, too. And all sorts of hi-jinks occur.

Part Filipino soap opera, part Hammer horror film, Curse of the Vampires is decidedly slow in its approach to its vampire curse. De Leon presents the bloodsucking elements nearly right away, but the way the characters deal with knowing their family lineage has been tainted by the presence of a vampire in their ranks is almost glacially paced. In fact, a lot of the film sets aside the horror elements of the plot for familial tension. Leonore’s boyfriend Daniel (Romeo Vasquez) wants to marry her, but the strict societal norms restrict that; he’s forced to languish on the sidelines, and more than once tries to initiate a duel (with glove slap) with Eduardo once her becomes family patriarch. On the other hand, Eduardo quickly succumbs to the vampire curse and drags his own lover in with him, prompting family feuds when Eduardo turns “evil” and refuses to burn the family home to the ground against his father’s dying wishes.

Much of Curse of the Vampires deals with family lineage and the inherent problems within their ranks; it is, also, a subtle castigation of Filipino societal mores. But the actual horror elements are too widely dispersed throughout the film; de Leon drapes the sets in gorgeous colors and antique designs, but they are rarely used to full potential. The film’s most effective moments come from its original vampire, the matriarch Consuelo Escudero (Mary Walter), who is consistently consumed with overwhelming red lighting. It’s unfortunate that Curse of the Vampires doesn’t get take much from its vampire elements, because Garcia is a great antagonist and could have used some more menacing scenes to drive home his character’s intentions.

While Curse of the Vampires is a fairly mundane vampire flick, it’s campy and stylistic enough to require at least one viewing. Also, it’s important to point out that there is a lot of blackface featured throughout the film to indicate how rich the Escudero family truly is. It’s a little shocking to see this blackface so prominently displayed, but it was actually not that uncommon at the time.

Severin Films’ inclusion of Curse of the Vampires in the Hemisphere Box means that it gets a new scan from the best surviving film element; it’s hard to say exactly what this is, but the presentation on the film is fairly good for its age and preservation. The film originally had a DVD release from Image Entertainment which featured a lightened color scheme; here, Severin presents it with darker contrast and the film’s Gothic elements seem much more suited to this scan. While definition can vary greatly throughout the film, most closeup shots retain good detail; wider, long shots do tend to blur. The red color lighting is absolutely lurid throughout, which was the intention. Ultimately, while Curse of the Vampires will never look amazing, this release has done some good work to fix some of the problems with the previous DVD release.

Audio is presented with a DTS-HD MA English mono track and it sounds fine despite some occasional muffling and some crackling and distortion that crops up in quieter moments. English subtitles are also included, and are recommended due to some heavy accents.

For extras, Severin has included a new interview with Eddie Garcia that lasts about 5 minutes. It’s a quick overview of his body of work, and it doesn’t necessarily get into Curse of the Vampires in specifics. Marketing consultant Samuel M. Sherman gives an 18 minute overview of how many of the Hemisphere films came to be, from start to finish. There’s also an audio commentary from Sherman that was previously available on the older release. A series of deleted scenes lasting nearly 10 minutes are provided without English dubbing – many of them are pretty mundane, and it makes sense why the majority were cut. Also included is a trailer and a radio spot for Curse of the Vampires and Beast of Blood, the most popular pairing of the films.

While Curse of the Vampires isn’t the best horror offering from de Leon, the film’s themes about familial curses and cultural difficulties do have some special resonance, along with the visceral red lighting. This Blu-ray does a good job with a new scan and includes a nice selection of new extras.

Check out our screenshots from this Blu-ray.

Curse of the Vampires will appeal to those fans of Filipino horror cinema but might lose other viewers. This Blu-ray, part of Severin's Hemisphere Box, does a good job providing a quality scan and ample extras.
Film
Blu-ray
Reader Rating0 Votes
4
Buy
Amazon
Hosting screenshots is expensive. If you want to see more galleries, consider donating!