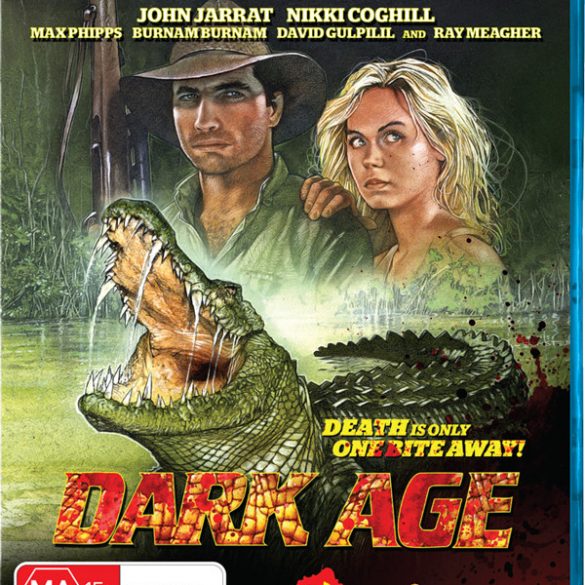 Steve Harris is a wildlife conservationist who has become known for his crocodile-loving personality in the Australian outback; he’s also widely respected by the large Aboriginal community. But when a giant crocodile with an appetite begins to hunt the populated coasts, Steve is forced to decide between trying to kill the giant croc – named Numunwari, an animal worshiped by the Aboriginees – and appease his boss and the rest of the community, or try to rescue it and bring it back to its homeland to please the Aboriginal leader Oondabund. Not an easy task, considering the croc is about 25 feet long!

Dark Age is the Ozploitation equivalent of Jaws, although this reviewer would argue that the film is not so much a copy-and-paste by scriptwriter Sondra Borg (adapting a story from Grahame Webb) as it is an inspired reworking of a giant animal movie with a more appropriate setting for Australian audiences. Like Jaws, this thriller about a giant killer crocodile focuses on one man’s quest to quell the killing spree – Steve Harris, played by John Jarratt before he became much more widely known thanks to Wolf Creek – enlisting the help of people who know the animal better than he does. In this case, it’s the Aboriginees led by Oondabund (Burnham Burnham) and his son Adjaral (David Gulpalil), the original natives of Australia. The same beats are here, but Dark Age manages to pull a lot more out of its antagonist thanks to the spiritual connection the Aboriginee people have with their local wildlife.

While director Arch Nicholson takes things slow (and sometimes a bit too dawdling), Dark Age is exemplary for two reasons. One is that it crafts the crocodile Numunwari into a frightful creature that also evokes sympathy; the other is that it effectively provides an antagonistic relationship between the Aboriginal tribe and the white people who seek to destroy whatever they don’t understand. These two elements work together and are vital to the other – the viewer must understand why cannot be harmed because it’s a symbolic representation of native spirituality, and they must see the burden that the crocodile places on those in the community. Together, it sets up a dissent that causes bloodshed in much the same way cultural and racial differences often do.

Numunwari then becomes a lesser evil than the humans looking to kill it, leading to the film’s bloody and dramatic conclusion. Nicholson does a fantastic job with characterization, highlighting how respectful Steve is with the Aboriginal people while Jackson (Paul Bertram) and Steve’s boss Rex (Ray Meagher) continue to misunderstand the situation. Jackson and his team of poachers are loathsome, and there’s the inevitable catharsis when they get their comeuppance.

The crocodile himself isn’t truly a highlight, since his attacks are rarely featured on-screen. The animatronic croc is voyeuristically used to hide any flaws, which was the correct call from Nicholson. However, one particularly gruesome scene shockingly depicts a young child being devoured by the beast, a ballsy move at any time but especially in 1987.

Dark Age is often slowly paced but the character moments are vital in creating an effective relationship between Steve and the Aboriginees, and in turn cementing the film’s themes. Most will want to see this Ozploitation classic because of the giant croc, but the dramatic elements make this a more captivating experience than other animal attack films, especially with its importance in Australian history.

Surprisingly, there are few actual croc attacks. However, the aforementioned child-eating scene is a shock because of how much it actually shows, including the deadly chomp. A hand is also bitten off, and a couple of other scenes of viscera are included.

There is one sex scene with Jarratt and Nikki Coghill, a sensual and classily-shot moment wherein Coghill is shown in fully nude form. Other than that, there’s nothing else.

Umbrella Entertainment has done a great job with the transfer of the film to Blu-Ray. Due to the film’s forgotten nature, it’s surprising to see the source was kept in such good quality. There are still some splotches, burns, and other marks due to age and damage, but ultimately much of the film looks quite pristine. Besides a few heavy grain shots in dark scenes, this is a great-looking Blu-Ray.

Umbrella provides both a Dolby Digital 2.0 track and a mono track. Both sound excellent, and you can’t go wrong with either. I used the 2.0 track but did swap to the mono track in certain places and didn’t notice a degradation of quality. There are also English subtitles.

Umbrella has included an audio commentary with John Jarratt and producer Anthony I. Ginnane that you can’t pass up. Also of note are two interviews with Jarratt and Ginnane that were cut from the documentary Not Quite Hollywood that runs about 16 minutes (including both interviews). A new panel discussion with film critics Lee Gambin, Alexandra Heller-Nicholas, Emma Westwood and Sally Christie adds a fascinating context to the film for non-Australians, providing historical education about the country’s bicentenary and its effects on the racial divide (about 23 minutes long). There’s also the inclusion of the 45-minute long documentary Living With Crocodiles, about Numunwari author Grahame Webb. Finally, trailers and image galleries round out the package.