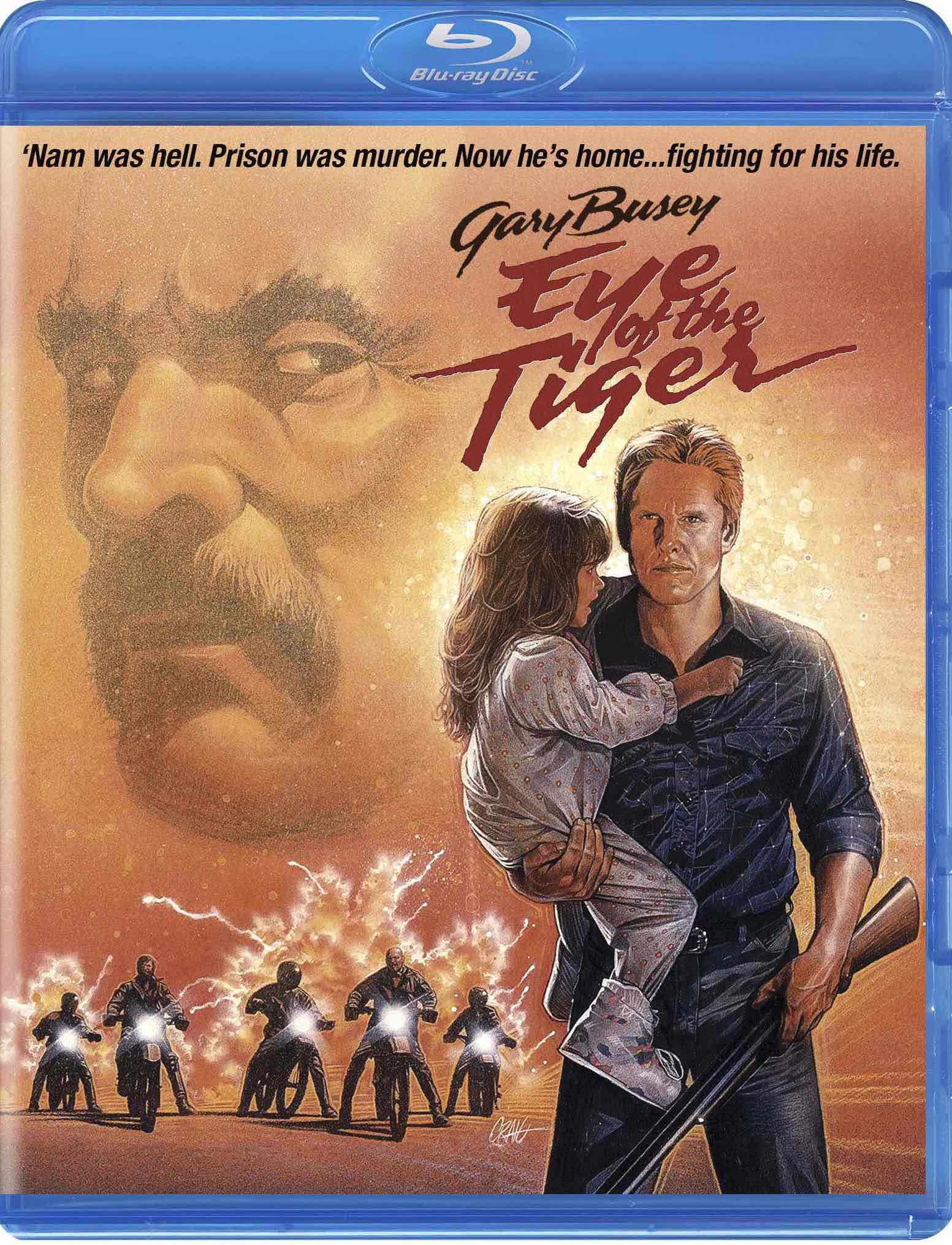 When you pay for the rights to a song, you damn well use it

You’d be hard-pressed to find an action film from the ’80s that did not have some tangential relation to the male protagonist suffering a devastating familial blow that causes him to go on a revenge-fueled rampage. They got five Death Wish films out of it, so it’s certainly a good formula. And Eye of the Tiger, the 1986 Gary Busey vehicle from director Richard C. Sarafian, checks all of those boxes and adds one more triumphant point: it could be even better if you license an extremely popular rock song that had a pretty good run on another franchise’s soundtrack.

Eye of the Tiger stars Gary Busey as Buck Matthews, the aforementioned vengeance-fueled man, a Vietnam veteran who just got out of a jail and is targeted by a roving band of bikers led by Blade (William Smith). The Sheriff (Seymour Cassel) of the town is on the take and allowing the riffraff to run wild on the streets, and after Matthews’ wife is murdered and his daughter left in a state of shock, he utilizes the help of local cop J.B. Deveraux (Yaphet Kotto) to take down the bikers in an eventual Mad Max-ian climactic fight on the sand.

To be completely honest, Eye of the Tiger is over-the-top ridiculousness amped up with a particularly trashy premise – and it does it pretty well. Busey obviously plays unhinged with panache, but the real draw here is the depths of depravity the film plumbs. One particular scene finds the bikers dragging Matthews’ wife’s coffin down the road to his house – certainly tasteless, but effectively malevolent as well. None of Eye of the Tiger is very believable, from its crazy action stunts involving green-screen plane flying to the overall premise about a sheriff who blatantly ignores his townspeople being menaced. But all of it adds up to a stupid, enjoyable movie that utilizes “Eye of the Tiger” not once, not twice, but three times to maximum effect. Someone paid for it and they were definitely going to get their money’s worth.

Eye of the Tiger is certainly not the best of the action revenge flick, but it follows its format to a T and manages a couple cool scenarios – one in which Busey beheads a biker with wire pulled taut across the road. Frankly, viewers will enjoy the film because of its outrageous cheesiness and forced song tie-in; and if you know what you’re in for, Eye of the Tiger is one great time.

Scorpion Releasing has brought Eye of the Tiger to Blu-ray with a new 2K scan of the film’s interpositive. The source seems a bit lackluster as the image often suffers from various damage speckling, from cigarette burns to small debris. However, most scenes feature strong clarity and good color correction, with only a few more pronounced areas of quality decline here and there. Nighttime sequences are particularly dark, but I did not spot any crush. Occasional softness crops up in particular scenes, leading to some inconsistency in the overall offering. However, I am not sure many are itching to release Eye of the Tiger anytime soon, so this fairly good transfer is probably the best we will get.

The main audio track for this release is a DTS-HD MA 2.0 Stereo track, and though unlisted on the Blu-ray box, there is also a Dolby Digital Stereo 2.0 track. In my experience the dialogue on the DTS track was a little low, while the sound effects were at normal volumes. This made for an uneven experience turning up the volume for the vocals and then getting smashed in the face with bike revving. Besides the dips in dialogue volume, the rest of the audio sounds good, with a crystal-clear recording of “Eye of the Tiger.” You can check our Spek analysis for more information regarding the audio levels. English subtitles are also included.

There are no extras on this disc besides a few trailers, including Eye of the Tiger‘s.

Eye of the Tiger is entertaining enough to recommend for fans of vengeful action films. Scorpion Releasing has brought the film to Blu-ray with a fairly good transfer that suffers from some audio issues and a lack of extras. While the package itself is not particularly tempting, if one is interested in a Gary Busey-led over-the-top action movie, it’s still worth picking up. 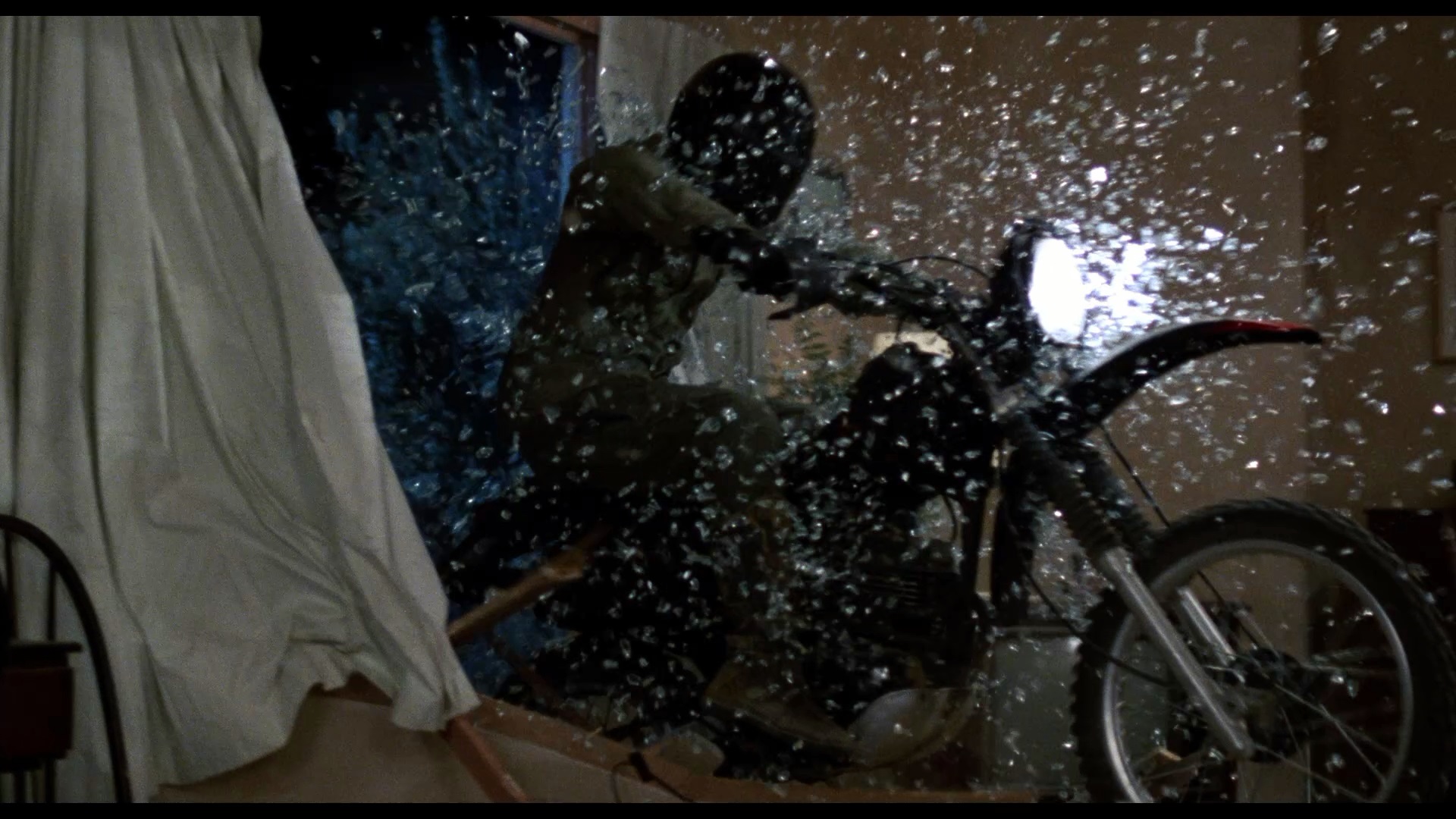 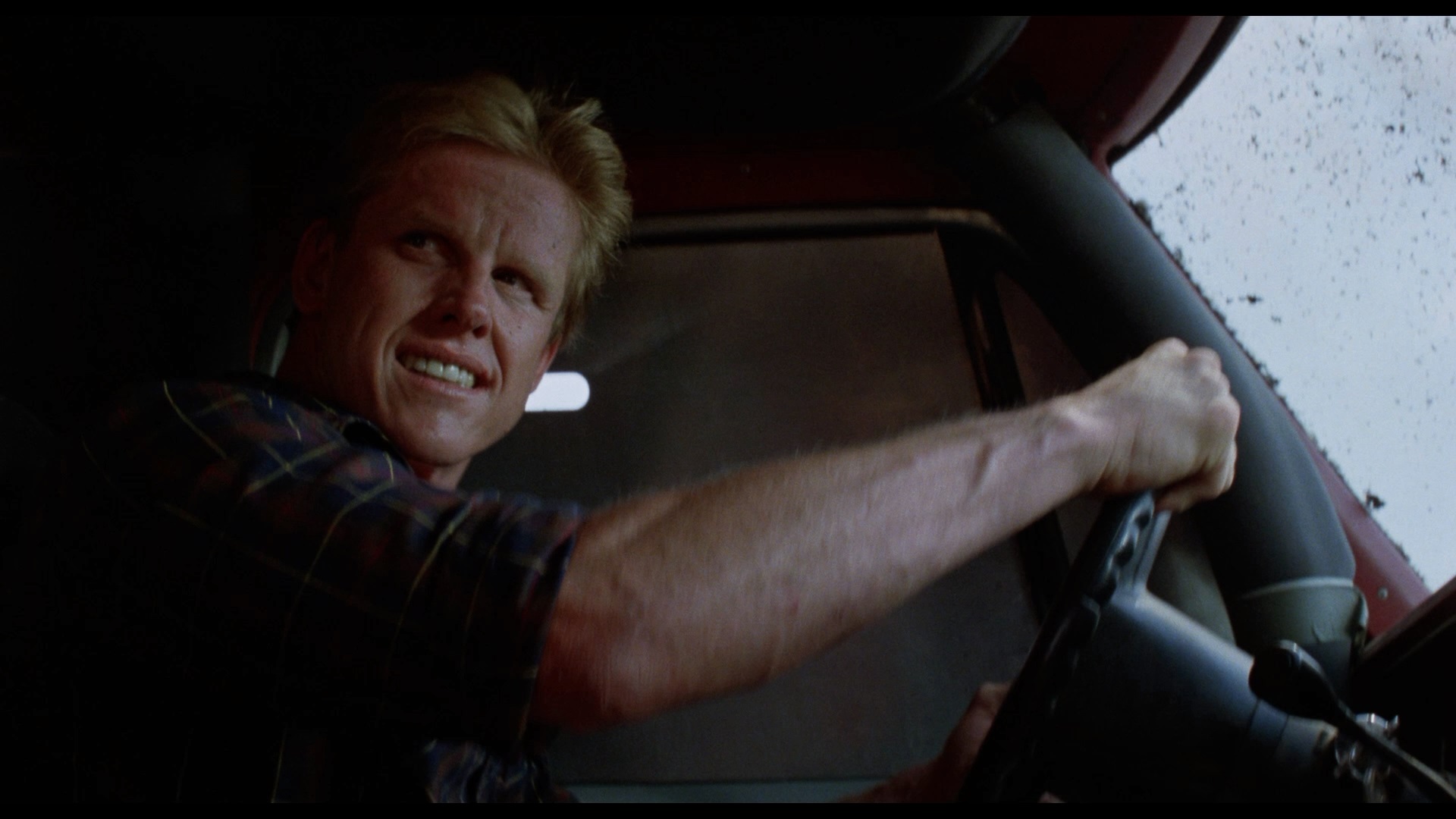 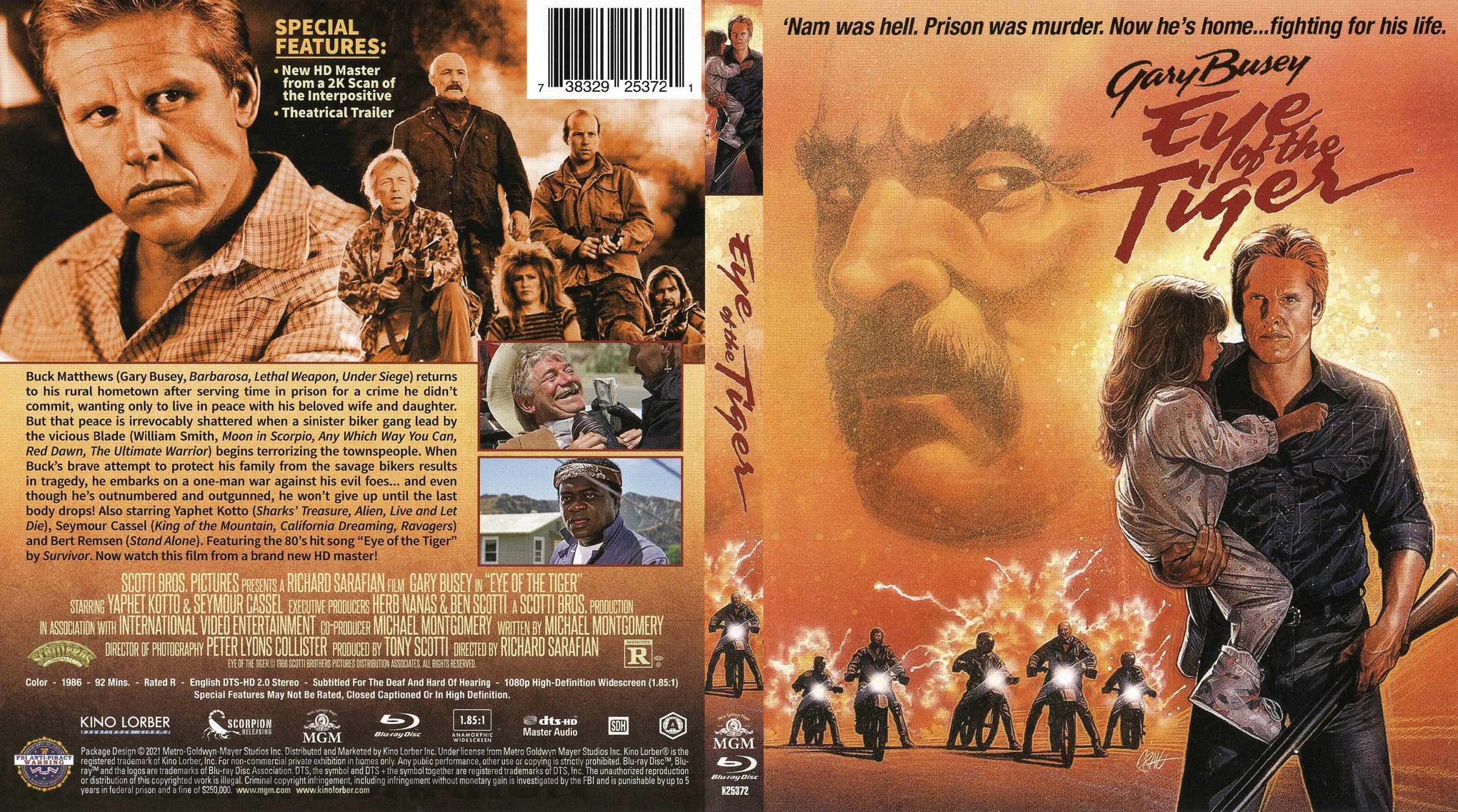 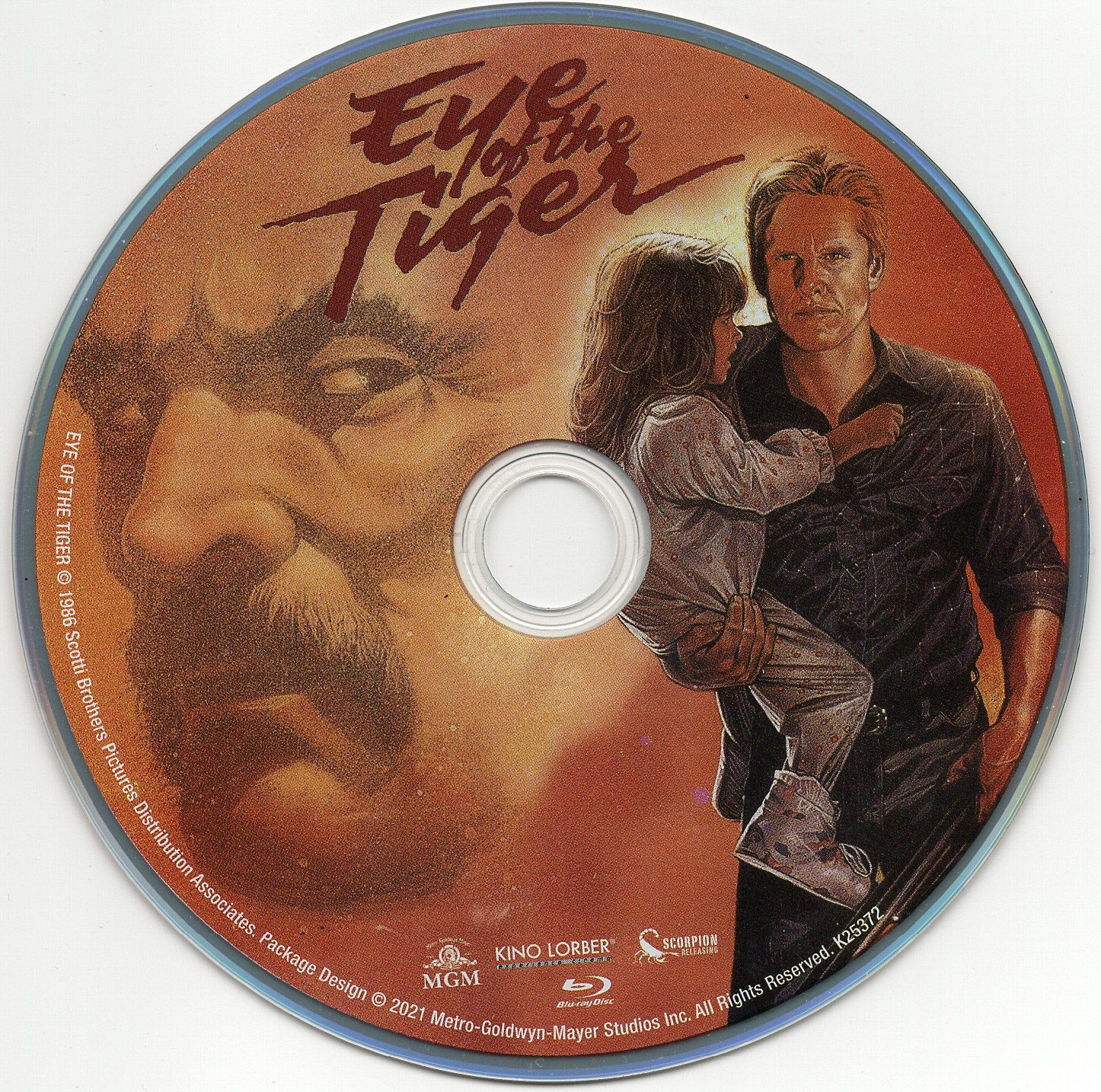