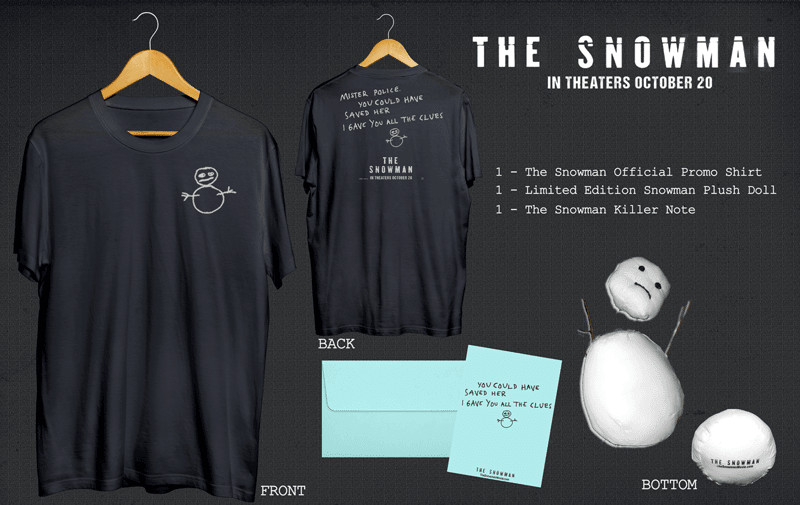 The Snowman hits theaters October 19, so we’re not sure if it’s going to become a cult film or not. But the trailers have been looking pretty cool, and it seems like it’s going to scratch that exploitative serial killer itch I get sometimes. Here’s a synopsis of the film:

When the next snow falls who will he take?

When an elite crime squad’s lead detective, Harry Hole (Fassbender) investigates the disappearance of a victim on the first snow of winter, he fears an elusive serial killer may be active again. With the help of a brilliant recruit (Ferguson), the cop must connect decades-old cold cases to the brutal new one if he hopes to outwit this unthinkable evil before the next snowfall.

Thankfully, we’ve been given the opportunity to provide one lucky winner with a package full of The Snowman goodies to promote the film’s release!

Included in this Snowman pack is the following:

1 – Limited Edition Snowman Plush Doll: This limited edition Snowman plush is only available via this promotion and has a run of 200 pieces worldwide. It is a replica of the killer’s Snowman and features a detachable head and the Snowman logo on the bottom.

1 – The Snowman Official Promo Shirt – An official promo T-Shirt featuring The Snowman logo on the front and the signature design on the back.

To enter to win this giveaway, leave a comment below with your favorite film serial killer of all time, and provide an email address where we can contact you. You can also tell us how excited you are to see The Snowman later this month. This giveaway is open to US and Canada entrants only. Please no PO boxes.

The contest ends October 29 so get your entries in!