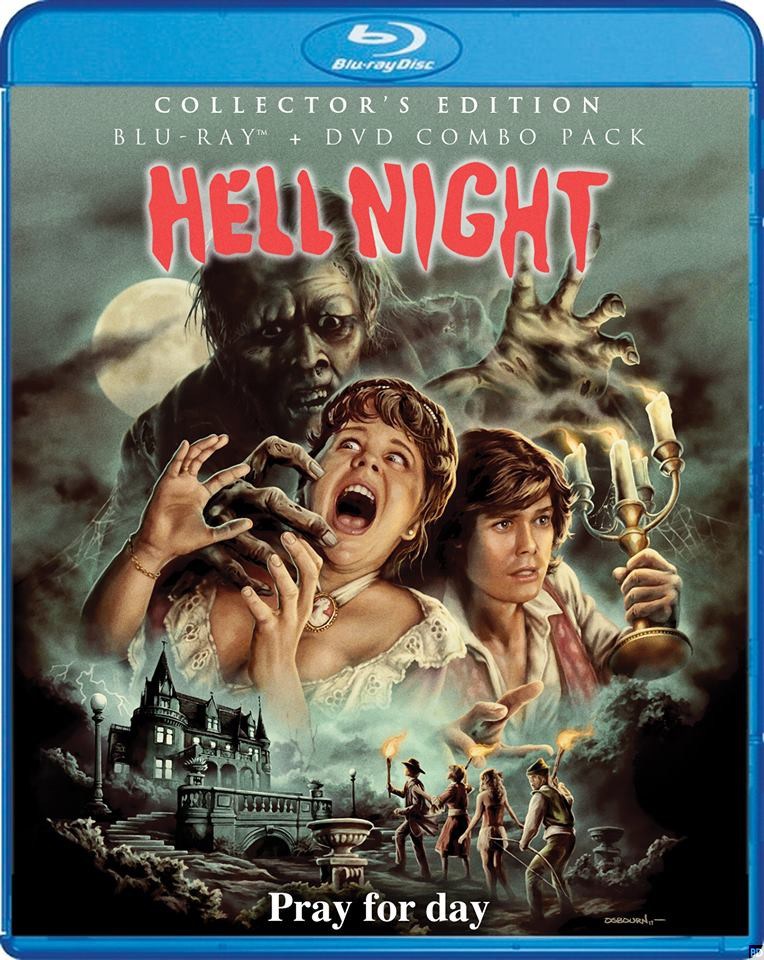 Tom DeSimone’s 1981 slasher film Hell Night is a perfect encapsulation of the formula: scary place, nubile college-age kids drinking and doing drugs, and an insane, deformed killer on the loose and angry for no apparent reason other than that the partiers have invaded his home. Almost 27 years ago to the date, Roger Ebert wrote that Hell Night “is a relentlessly lackluster example of the Dead Teenager Movie,” and he couldn’t have been more correct. He even namedrops The Burning and Friday the 13th. DeSimone is following the formula to the letter, but there’s a reason why the ’80s slasher prospered for so long: it works.

In Hell Night‘s case, its central conceit is also its most interesting: take Linda Blair, all grown up and happily showing off her womanhood after a successful childhood stint in The Exorcist, and throw her into a creepy manse along with three other goofy college kids. The setup evokes a natural response in the audience, as DeSimone chooses to focus the first act of the scene around the house itself; he even sets up some supernatural elements as Blair’s character Marti encounters a transparent spirit in the house. The faked haunted house elements by the fraternity president add some much-needed scares to the film to help Hell Night get going, and by then its murderous killer has made his appearance.

It helps that Garth Manor is dripping with atmosphere, sometimes quite literally thanks to all of the candles throughout the house. There are secret passages, underground cellars, and other areas that add menacing mystery to the halls of the mansion. It’s the same sort of set piece out of which Hammer wrung suspense, and it works just as well here – we’re not traipsing around woods now, and despite the film’s formulaic design, DeSimone works in some refreshing elements as well.

One of the most interesting is the likable aspect to most of the characters (barring Suki Goodwin’s bimbo blonde Denise). Blair’s Marti is a mechanic whose sole interest in the fraternity is getting free stuff out of it; Jeff (Peter Barton) is a rich boy with a heart of gold, forced into the fraternity because it’s what his family expects; and Seth, despite looking to get off, seems like a good guy once he escapes the manor and comes back with a shotgun he steals from the police station. DeSimone spends quite a bit of time on character, and that helps the audience root for these characters who we know are destined to die.

With that said, Hell Night falters in its final act with scenes that are overly long (and at 101 minutes, Hell Night certainly could have used some trimming). Its killer is also rather lackluster, a combination of elements from other horror films like The Texas Chain Saw Massacre, The Burning, and The Hills Have Eyes all rolled into one; the backstory, while attempted, leaves something to be desired because there’s no twist to what the audience is presented with at the beginning of the film.

There’s a lot to like about Hell Night, though, even despite its formulaic approach and slower pacing. Blair is a treat on-screen, and the film’s violence, while tame in comparison to some of the other films released at the time, works well to give the audience something to imagine. A good score and a surprisingly effective location make Hell Night a fun slasher film that won’t surprise but will absolutely give viewers a hell of a good time.

Scream Factory has released Hell Night on Blu-Ray as a Collector’s Edition package, and they’ve also included a DVD disc. The Blu-Ray gets a new 4k scan from a 35mm film print that was the best surviving version of the film; before the menu, a message from Scream Factory states, “We did an extensive search for the original film elements, but were unable to locate them. Therefore, this new transfer comes from a 4K scan of the best surviving archival 35mm film print of Hell Night. We did extensive color correction and film restoration to clean up any film damage. Because the print was missing some minor footage, so we have inserted a small amount of standard definition footage to deliver the complete film. We hope you enjoy this new restoration of this ‘80s horror classic.”

The film itself looks fairly good, although wear and tear is quite apparent. There are sometimes notable burns, lines, and other pieces of debris. However, this 4k scan still manages to get a lot of mileage out of the 35mm print. Some issues include softness and blurriness at times and some overwhelmingly dark sequences, but color restoration is very good and Scream Factory has obviously taken care to make this as clean as possible. The standard definition sequences are noticeable and become somewhat distracting due to odd, jumpy transitions, but that was unavoidable due to the print’s incompleteness. This may be the best possible transfer we see for Hell Night, and fans longing for a good Blu-Ray copy of the film (the only one on home video besides an old Anchor Bay DVD release) will be pleased with these results.

The film gets a standard mono audio track which sounds clean without noticeable issues or volume drops. The musical score is quite good and the mono captures that perfectly well.

Scream Factory has gotten a number of bonus interviews with a lot of the cast and crew. There’s a 35 minute interview with Linda Blair; a 25-minute segment with producer Bruce Cohn Curtis; another 20+ minute production with writer Randy Feldman taking a look at the script, a collection of interviews about the body count within the film that includes director Tom DeSimone, Randy Feldman, and makeup and special effects crewmembers; a 25 minute interview with director Tom DeSimone; a 7-minute look at the locations of Hell Night; and another 20 minute interview with designer Steven Legler about the house itself. There are also two interesting conversational extras between Vincent Van Patten and Suki Goodwin and Kevin Brophy and Jenny Neumann that span about 20 minutes apiece; these add something different than straight-up interviews as the two actors have a dialogue about their memories working on the film.

The DVD also gets some of these special features: the audio commentary and some of the interviews are included, leaving out a couple extras exclusive to the Blu-Ray.

Collectively, this is a massive release from Scream Factory and fans of Hell Night will love to have all of the stars back discussing the film. It’s a delight to see this Collector’s Edition release pack so many features onto this collection, and the new 4k scan is about as good as can be expected based on the damaged archival film source. 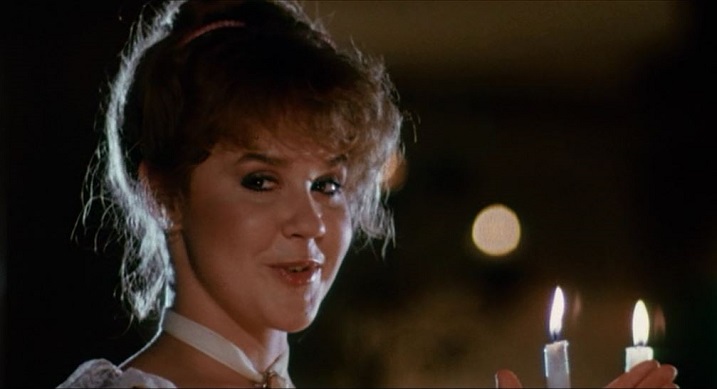