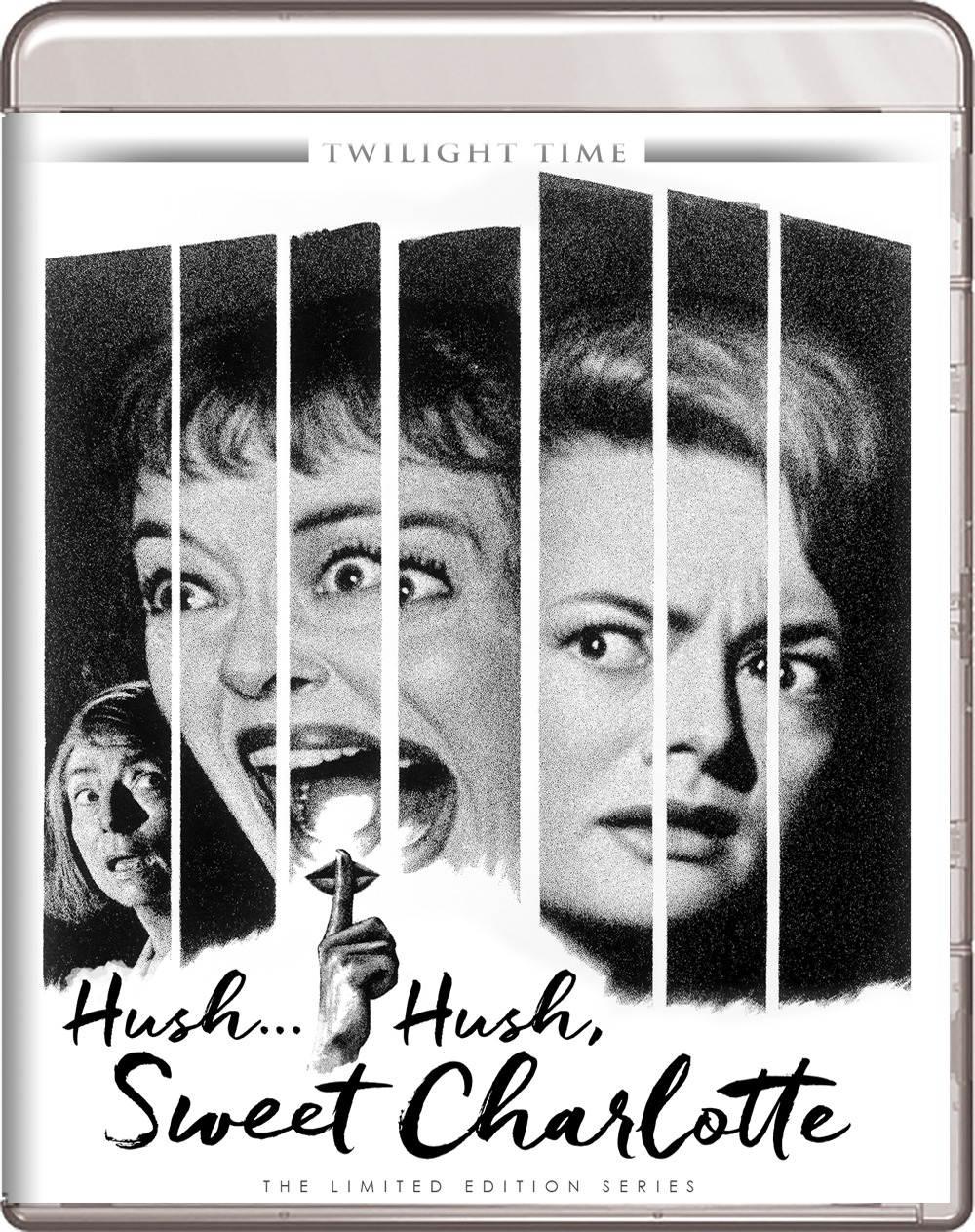 Verdict
Hush... Hush, Sweet Charlotte is a slow southern Gothic with a lot of heart as long as viewers have patience through its lengthy middle portion. Twilight Time has done a great job with this transfer, including an image that pops and a series of extras (most previously available) that add depth to this release.
Film
Special Features/Quality/Packaging
Reader Rating0 Votes
The Good
Soapy southern gothic
Chiaroscuro
Solid special features and great image
The Bad
Most special features previously available
Film's slow middle
4.3
Very Good
Buy

Hush… Hush, Sweet Charlotte feels like a familiar film, as it should: it shares a lot of the same tenets as Robert Aldrich’s previous potboiler Whatever Happened to Baby Jane?, including star Bette Davis as a disturbed woman haunted by the past, writer Lukas Heller adapting a screenplay from a Henry Farrell story, and even a similar running time. Aldrich found success in that previous film in 1962 thanks to the drama between Davis and Joan Crawford (both on- and off-screen), but Hush… Hush, Sweet Charlotte is forced to replicate those thematic ideas without Crawford and with a new Southern setting. Still, the film hits all of the same notes to make it a Gothic-tinged thriller, with solid acting from its main protagonists and villains and a lot of soapy drama.

Hush… Hush, Sweet Charlotte follows the exploits of titular Charlotte (Davis), a hermit being evicted from her father’s plantation at the start of the film. Her cowed nature is due to the death of her boyfriend John (Bruce Dern) back in 1927, a vicious murder involving a severing of his head and hand that has been pinned on Charlotte for over forty years despite no evidence. As Hush… Hush, Sweet Charlotte picks up, Aldrich follows Charlotte after she invites her duplicitous cousin Miriam (Olivia de Havilland) to the residence, documenting Charlotte’s slow dissolution into insanity as she’s tortured by visions of her dead lover and duped into thinking that John’s wife Jewel (Mary Astor) has something to do with it.

It’s clear from the start of Hush… Hush, Sweet Charlotte that Aldrich loves presenting audiences with horrible past events. In this case, the entirety of the film is predicated on John’s murder in 1927, an admittedly gruesome event that leaves Charlotte publicly but not legally indicted; she’s spent the past forty years mourning the loss of the man, somewhat crazed from grief, but also shunned by the community because of poor crime reporting and sensational tabloids. While Aldrich often gives the film a deliciously operatic tone – and jaunty music besides – the meat of the movie relies on a depressive, bleak situation.

Truthfully, Hush… Hush, Sweet Charlotte suffers for its bloated middle portion once Miriam is invited to Charlotte’s house to help stop the county commissioner from evicting her from the plantation. De Havilland is particulary scene-chewing in her role, but Aldrich spends too much time documenting some rather unnecessary scenes, belaboring points. This is Aldrich’s modus operandi, however; just take a look at nearly all of his filmography, and one will see a pattern of stretching films out over more than 120 minutes. Here, Hush… Hush, Sweet Charlotte could have benefited from a bit of editing, cutting to the film’s plot without lingering on mundane melodramatics.

That’s because the film really kicks into high gear in its second hour, offering up dreamy sequences where both the viewer and Charlotte are unsure exactly what’s real. Aldrich makes fantastic use of chiaroscuro here, heavily shadowing characters and areas of the gloomy Gothic manse; some of the movie’s strongest cinematic accomplishments are the lighting and camera angles, employing technique to generate sinister emotions.

That second act also ditches the more upbeat aspects of Hush… Hush, Sweet Charlotte to dive into the evils of the human condition. Charlotte’s persecution over forty years is due to the cowardice of a particular individual and the manipulation of another; without spoiling any of these plot points, I will say that the latter is stronger than the former and should generate plenty of anger towards the character in question.

After Charlotte gets her vengeance, there’s a somewhat triumphant finale wherein she loses the house but regains her resolve and confidence; Aldrich films it as a reverse coming-home, a moment wherein the gossipers are finally silenced by Charlotte’s presence, where she models for the camera, where she finally accepts herself. For a film that often features a soap opera-heavy thematic angle – wherein exaggerated bitch slaps, southern accents, and good-old-boy antics abound – Hush… Hush, Sweet Charlotte certainly finds a mature and profound message in its conclusion thanks to Aldrich’s direction and Heller’s writing.

However, the film will certainly not be for everyone due to its extended length and plot meanderings. Recommended for those fans of Whatever Happened to Baby Jane?, slow southern Gothics with a tinge of soap, and those with the patience to make it to the rewarding finale.

Twilight Time’s Blu-Ray release of Hush… Hush, Sweet Charlotte features a fantastic HD transfer of the film. The black-and-white footage looks great, and as stated in the film review, the chiaroscuro really pops thanks to this release. There are two audio options on this release; one is a 2.0 DTS-HD MA track, and the other is the standard 1.0 DTS-HD track. Both sound very good, and quite honestly I prefer the mono track over the 2.0.

Three featurettes are also included. One is a making-of called “Hush… Hush, Sweet Joan: The Making of Charlotte” poking fun at Crawford with the title, another is an interview with Bruce Dern (John Mayhew in the film), and the final is a vintage short called “Wizard Work.”All told, about 40 minutes of extra features here, with theatrical trailer and TV spots also included.

Finally, the package also features an insert essay from Julie Kirgo, as always an excellent edition to this Twilight Time release.