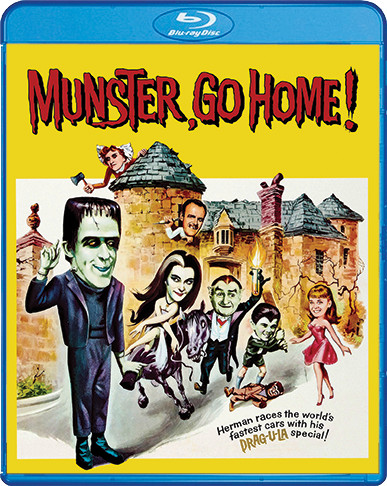 Like the TV show, but with increased production values

By Munster, Go Home!‘s release in August 1966, the television show starring the titular family had already been canceled after two seasons. However, the plan for this merry band of Universal monsters was to get them into international syndication, and so a theatrical release was created as a final send-off to propel the Munsters into worldwide recognition. It didn’t work very well; the film flopped in theaters, but it was still a distillation of everything that people loved about the TV series, albeit with a broader storyline and a much bigger budget including Technicolor work to allow audiences to see the Munsters in color for the first time.

Everyone from the original show comes back for this film except for Pat Priest as Marilyn, replaced by Debbie Watson to attempt to jumpstart her film career. Likewise, director Earl Bellamy also returns after helming many an episode in the show’s run. Munster, Go Home! finds Herman (Fred Gwynne), Lily (Yvonne De Carlo), Grandpa (Al Lewis), Eddie (Butch Patrick), and Marilyn heading to England after Herman learns of a rich uncle’s death that has left him an estate and lots of riches. The film tackles hijinks on the journey as well as a cheesy plot for the non-monster Munster family in England to murder Herman in a drag race competition against the Munsters’ mortal enemies, the Moresbys.

For the most part, the movie version of the Munsters translates the appeal of the television show quite well without changing up many facets of telling the story. Herman is still his same boneheaded self, with Lily often taking charge of the family dynamic. Marilyn still gets up to her human romance with the Romeo & Juliet-esque love story between her and Roger Moresby (Robert Pine). And there are still a lot of jokes about the Munster family being seen on the street, those not used to the sight of monsters jumping out of their skin. While Munster, Go Home! could be criticized for using the same old jokes over from the TV series, it’s also quite impressive that Bellamy is able to craft a full-length tale around what many would consider to be a one-note idea.

Also of note is the production value, which is certainly a step up from the series’ low budget. Everything is on a much higher scale here, from the trip overseas on an oceanliner to the drag racing that takes up the final act. That wide range makes the film even more fun and it allows Bellamy to play with some ideas that just couldn’t be done in the show.

With that said, fans of The Munsters will enjoy this popcorn film well enough, and the jokes probably still won’t land for those who didn’t get the appeal in the first place. Ultimately not much has changed in translation from small to big screen, and yet Munster, Go Home! shows the promise of expanding the Munsters’ world and what it could do to open up more scenarios for Universal’s mixed and mixed-up family.

CHECK OUT
Extensive screenshots from this Blu-ray release

Scream Factory has released Munster, Go Home! on Blu-ray without specifying the source of the transfer. From what I can determine it is not new, and is perhaps the same as the German Blu-ray from Koch Media. Whatever the case, the transfer looks quite impressive with excellent depth and detail along with good color timing that truly shows the saturation of the Technicolor work. Grain is consistent and medium-bodied, with only a modicum of damage throughout. This is an impressive restoration of the film in its 1.85:1 aspect ratio. This release does not include the 1.33:1 version of the film that was present on Koch’s release.

Included audio is a DTS-HD Master Audio 2.0 mono track that sounds good and punchy, without any volume drops or unwanted noise. English subtitles are also included with no transcription issues.

Scream Factory’s Blu-ray may not have a new transfer but it makes up for that by providing the most comprehensive extras to date. One such offering is the entire The Munsters’ Revenge TV movie, featuring a new 2k scan in its 1.33:1 aspect ratio. The quality on this film is also quite good, but most will just be happy that it’s included at all – it effectively makes this release a double-feature. Also present is a new audio commentary featuring Butch “Eddie” Patrick and Rob Zombie; as you may or may not know, Zombie is a huge fan of The Munsters, and certainly shows it on this track. Vintage cast radio interviews and radio spots are included, along with extensive still galleries for both Munster, Go Home! and The Munsters’ Revenge. Ultimately if you are a fan of anything Munsters, you should pick this up – possibly even if you already own the German release.

Munster, Go Home! is a solid translation of the TV show to film with a larger budget and the same old jokes. Scream Factory has done a great job on this releasing, porting a great existing transfer and making this a double-feature with The Munsters' Revenge.
Film
Blu-ray
Reader Rating0 Votes
Good
Transfer looks great despite its age
Fun film that shows the best parts of The Munsters show
Bad
Lack of new nterviews that could explain some behind-the-scenes drama (about Marilyn)
4
Buy
Amazon
Hosting screenshots is expensive. If you want to see more galleries, consider donating!