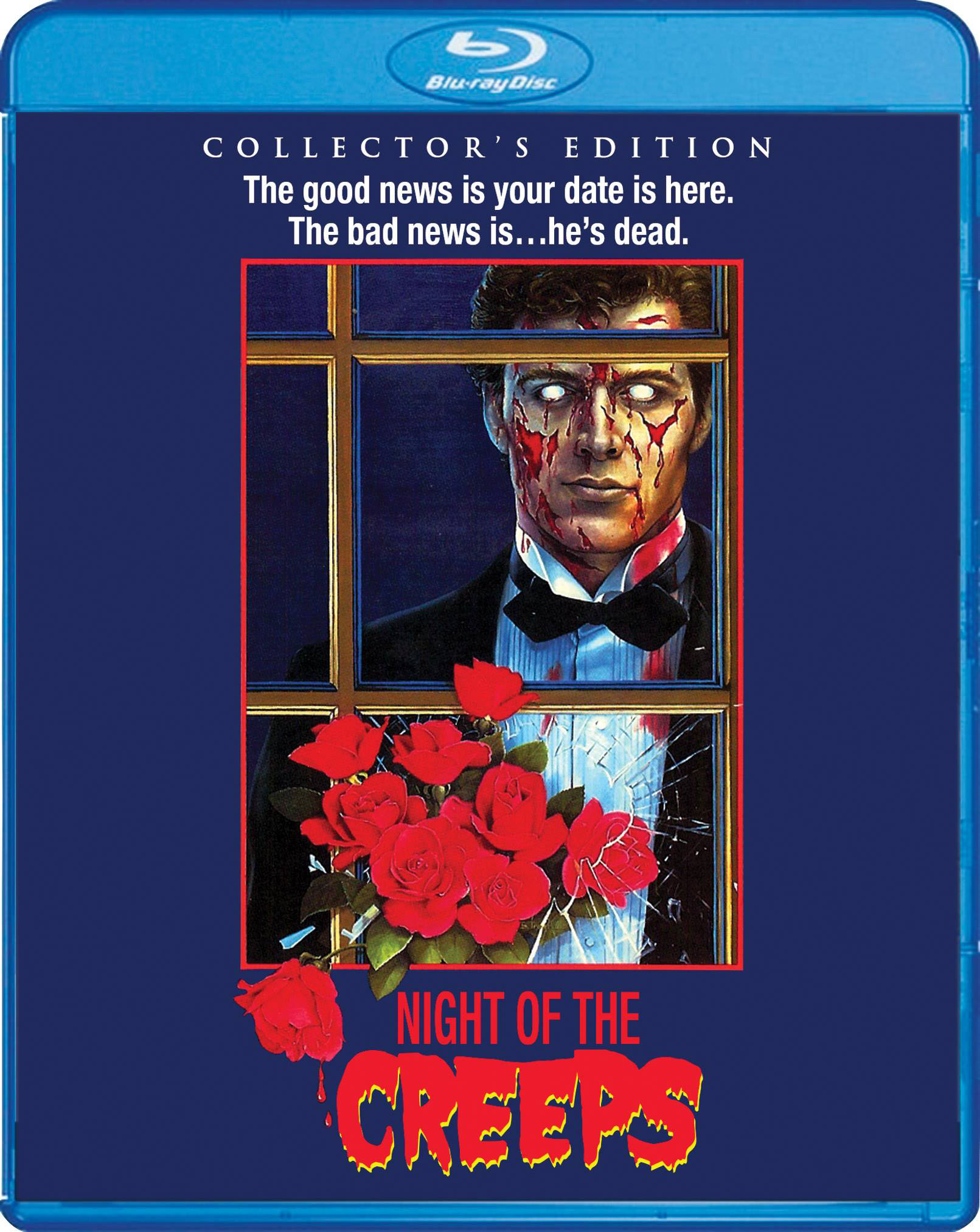 Night of the Creeps is a hilariously good time that cracks on zombie flicks, and Scream Factory has released a definitive edition of the film despite the lack of new transfer.
Film
Blu-ray
Reader Rating0 Votes
4.5
Buy
Amazon

Fred Dekker’s Night of the Creeps is an ode to horror film as much as it is its own cult beast. The sheer number of references to horror directors he sneaks into the script becomes comical at a certain point – looking at you James Carpenter Hooper – and ultimately the film plays on a lot of metacritical tropes despite offering up a fairly serious horror story in its own right. Partly Night of the Living Dead, partly EC Comics-esque sci-fi elements, with a little dash of ’80s college comedy and a smattering of actual emotional investment, Night of the Creeps is a cult classic that got overlooked during its release in 1986, but since then it has made a rousing comeback thanks to horror fans sopping up the sluggy fun from this flick.

Part of the movie’s value comes from Tom Atkins playing the stereotypically gruff detective Ray Cameron, influenced by noir and pulpy fiction. He’s at the top of his game in Night of the Creeps, getting all of the one-liners (“Thrill me!”) and the most heroic part. Plus, Dekker gives Cameron a traumatic backstory; the film’s opening 1959 setup finds Cameron unable to stop an ax slasher from chopping up his ex-girlfriend, a past that he’s unable to escape that literally rises from the dead in the film’s present-day plot. Dekker’s character-building doesn’t stop there, though; the film has a surprisingly effective relationship between its main characters Chris (Jason Lively) and J.C. (Steve Marshall), one that has prompted all kinds of ‘shipping thanks to a teary final goodbye from J.C. Impactful and wholesome, J.C. is sort of Night of the Creeps‘ fine line between outright parody and cheesy horror. Dekker has it both ways, and it works because of these nuances. 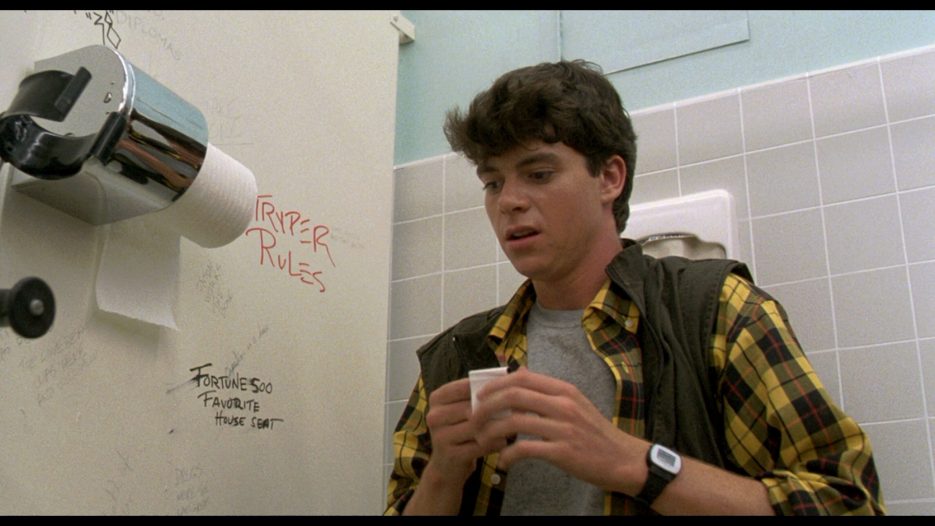 With that said, the film also finds ways to work in its dark comedy and gore. From the opening it’s apparent that Dekker isn’t out to scare the socks off of the audience. The film has a few jump scares, and some genuinely tense moments, but for the most part, Dekker infuses sarcastic, slapstick humor into the mix that feels similar to Dead Alive in tone. This allows Night of the Creeps to get away with its hokier special effects work (that bus driver eye-popping sequence comes to mind), going in a much less serious direction. It’s not overtly violent, but head-bursting and moldy dead corpses are the norm.

As a parody of zombie film, Night of the Creeps does just about everything right. It’s fun, funny, and even a little emotional at times. In the film’s director’s cut, it’s also got a bit of a mean streak. The film is a great encapsulation of nostalgic horror, and it’s nice to see that people have figured out what Dekker was going for even 33 years later. Keep your mouth shut, your mind turned off, and a flamethrower handy, and Night of the Creeps might just crawl into your brain and make a home there. 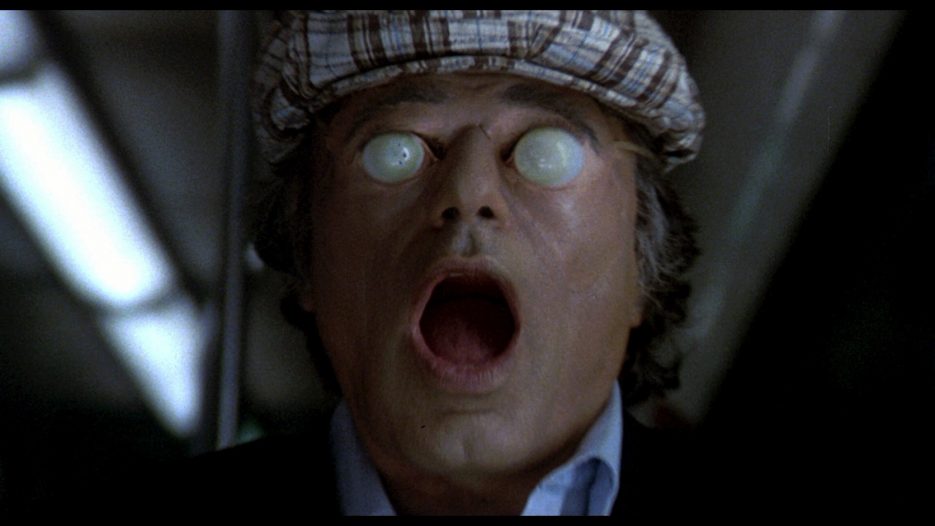 Scream Factory has released Night of the Creeps as part of their Collector’s Edition series on Blu-ray. As most are aware, Sony does not allow Scream to do new transfers of their licensed films, so this Blu-ray does see the company reusing a previously-existing HD transfer of the film Sony released earlier. However, that transfer still looks rather good; it has a medium grain field except for a few darker scenes where that grain becomes a bit chunkier and more obstructive, and the color timing still pops (especially that red corsage Chris wears). Darker scenes don’t lose their detail and there’s no black crush. Detail is good in close-ups and there’s rarely a soft shot. Overall, this transfer still looks good and this is an especially nice release for people who don’t own that earlier Blu-ray.

Also of note is the fact that Scream Factory has included both versions of the film on their own separate discs. The Director’s Cut has been the most common release of the film on home video, but this Collector’s Edition provides the theatrical cut too; both are almost identical except for their endings, and ultimately the Director’s Cut is the better of the two. Still, it’s nice to have both in one release with the same quality transfer on both

Audio is presented with both a 5.1 and 2.0 DTS-HD MA track, and I didn’t hear any issues crop up with either of these features. No volume drops or dialogue issues. English subtitles are included with occasional transcription mistakes.

For extras, Scream has put all of the new features on the Director’s Cut disc. This includes new interviews with Jason Lively, Allan Kayser (Brad), Vic Polizos (the coroner), Ken Heron (the cryogenically frozen body), Suzanne Snyder (the girl who opens the door to find undead Brad), and editor Michael N. Knue. All of these range from about 7-10 minutes with a lot of great information from all of the cast. However, Allan Kayser’s interview in particular has some extremely muffled audio that’s difficult to listen to. Otherwise, though, you can expect almost an hour of new interviews on this disc. Also included is a new episode of Horror’s Hallowed Grounds that includes Fred Dekker and Jason Lively on various set locations from the film. It’s another great feature from this crew.

Audio commentaries from Fred Dekker and Tom Atkins, Jason Lively, Steve Marshall, and Jill Whitlow are also included – these were previously available on the prior release.

On the theatrical cut disc, Scream includes previously available featurettes including the lengthy series of interviews on the making of Night of the Creeps feature as well as an interview with Tom Atkins, footage from deleted scenes, and a theatrical trailer.

This release also comes with slipcover and reversible cover artwork.

Overall, this Collector’s Edition set is the most definitive release of Night of the Creeps to date. It has a number of new extra features as well as all of those included on the previous Sony release, as well as both cuts of the film. Those who own Sony’s Blu-ray may be disappointed to find the lack of new transfers, but ultimately it doesn’t really need a new one. For those who don’t already own a copy, let this slither into your home.

CHECK OUT
Screenshots from this Blu-ray.
Hosting screenshots is expensive. If you want to see more galleries, consider donating!