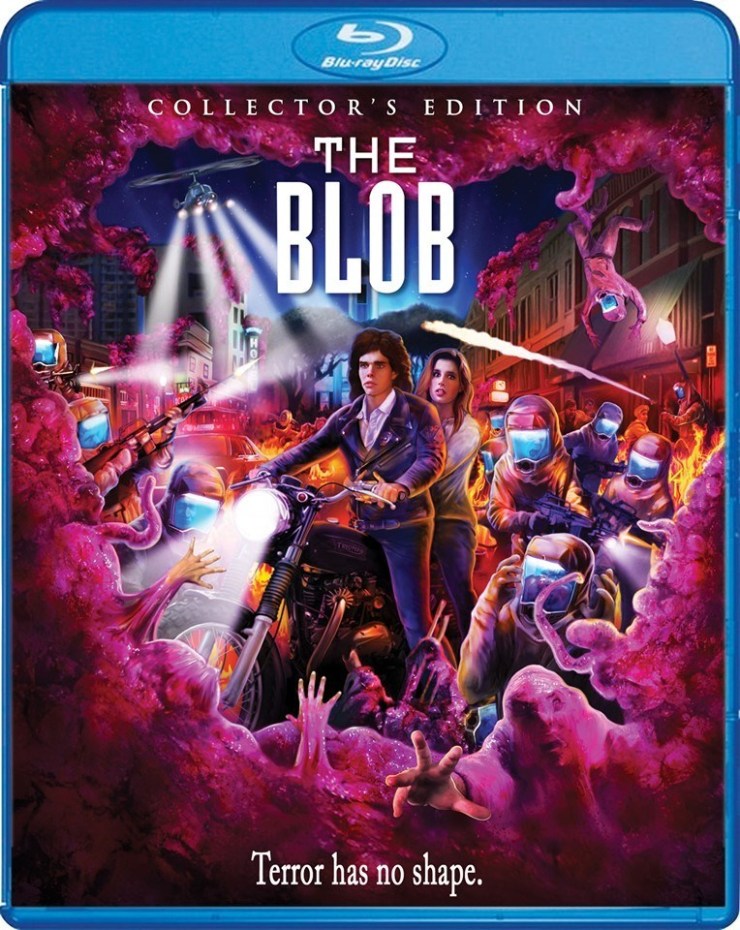 The Blob is a fun film filled with goopy gore effects and a punchy storyline. This Collector's Edition Blu-ray has just about everything you could want from a new release of The Blob... except a new transfer. Still, the 4 hours of extras make this the most definitive Blu-ray release yet.
Film
Blu-ray
Reader Rating13 Votes
4
Buy
Amazon

The power of The Blob lies in its early depictions of small town life, the lingering shots of fountains in the town square or dusty sidewalks devoid of human life; the opening credits sequence throws the viewer right into the town before introducing them to the big football game between rival towns, the star football player able to convert a fantastic touchdown and also getting the cute cheerleader in the process. Welcome to Arborville, California, a place that feels a lot like the small town life of the 1958 film but with updated themes of bad boys, their reputations in town, and the government’s increased meddling in science.

Chuck Russell and Frank Darabont co-wrote the screenplay for this update, and they often trade off between tongue-in-cheek humor and sci-fi scares. But early on it’s clear that The Blob is not just a monster that threatens to consume the entire town; it’s also an allegory for claustrophobia in a place where it’s difficult to overcome your namesake and reputation. The Blob punctuates this from the moment Russell centers on the jock Paul (Donovan Leitch Jr.) as he gets together with the hot cheerleader Meg (Shawnee Smith). Paul looks like our ordinary hero, the type of guy who comes through in the clutch. Not only that, but he also seems like a genuinely nice guy, not the arrogant personality that his friend Scott (Ricky Paull Goldin) has. As The Blob gets rolling, Russell intercuts to scenes with Brian (Kevin Dillon), a bad boy with a bike and the epitome of ’80s hair styles (perhaps it was the intention that it looks like Dillon’s hair is trying to consume his head a la The Blob’s MO), who clearly has some familial issues and some recent delinquencies but otherwise has good intentions.

This is a jarring introduction at first; Paul should be our main protagonist, and Brian the antagonist, but The Blob paints a warmer picture of Brian than anyone else in the film besides Meg. And soon, Russell is throwing a wrench into the plot once the Blob makes its appearance: Paul gets a particularly violent, viscous-y death at the creature’s hands, or rather, jelly. It is Brian who emerges as the bad boy with a good heart, the kind of man who gets another shot at overcoming his nearly confining past to counteract not only the Blob, but humanity as well. With this, Russell and Darabont circumvent the usual themes of horror films, making The Blob a film that also improves upon the original’s idea.

But the plot isn’t the best part of the film; it’s the practical blob effects that really put the jelly on this sandwich. The Blob offers a number of awesome scenes, where people are consumed and partially digested by whatever acids are in the blob’s makeup. Some of those are done with fantastic makeup effects, like Paul’s death attempting to crawl out of the gelatinous fluid – it is, in part, a reversal of birth, and it’s just as frightening to watch. More than that, Russell doesn’t skimp on creative visuals; a phone booth bursts in on a victim due to the Blob’s constriction, and a man is sucked into a sink pipeline after being dissolved enough to get through the drain.

These are scenes that come without the CGI effects that movies of this sort would rely on now. These are practical, and – adhering to the jelly-like monster of the film – messy. They add depth when the movie could otherwise be another bland depiction of an unknown terror killing off the town. The Blob is still shlocky, but it’s intentionally so; Darabont and Russell have fun with the genre’s subtext while doing significant metaphorical work.

CHECK OUT
Extensive screenshot gallery for this release.

Scream Factory’s Blu-ray notably does not get a new transfer of The Blob, and that’s somewhat surprising considering the Collector’s Edition label and the fact that the film has had a number of Blu-ray releases with the same master over the years, including a German Blu, a limited edition one from Twilight Time, and an Australian release from Umbrella Entertainment. The quality looks almost exactly the same as the Umbrella/Al!ve release, with a darker contrast than Twilight Time’s brighter version. The film sports a lot of chunky grain especially in darker scenes, and there are occasional spots of compression-related artifacts just like the prior Al!ve release. Twilight Time’s scan was able to hide these a little better thanks to its brighter look. While this older transfer isn’t bad per se with the chunky grain much more noticeable in the screenshots than when the film is in motion, The Blob definitely could have used a new scan in 2k or 4k to really make it pop. While I would say Scream Factory’s release is the definitive edition of The Blob, it also is a bit disappointing that it could be a double- or triple-dip for some fans in terms of video quality.

Audio includes both a DTS-HD Master Audio 5.1 and a 2.0 track, both of which sound great in action – with the 5.1 giving the surrounding oozy sound effects great punch. No issues or volume drops here for either track. Subtitles are also included.

The extra features are where this Collector’s Edition really shines, although Scream Factory has chosen to include about 4 hours of extras on the same disc as the feature which could explain some of the compression issues. Still, the sheer amount of bonus content is awesome, including all new interviews with Chuck Russell, Jeffrey DeMunn, Donovan Leitch Jr., effects designers, and more – see the full list below. Most of these involve going through the crew’s background in film before getting into discussion of The Blob itself. Also new are two audio commentaries, one with Russell, Tony Gardner, and Mark Irwin and another solely with Shawnee Smith. Then there are ported extras including a previous audio commentary with Russell, theatrical trailers, TV spot, and still gallery. You’ll also get reversible cover artwork and a slipcover.