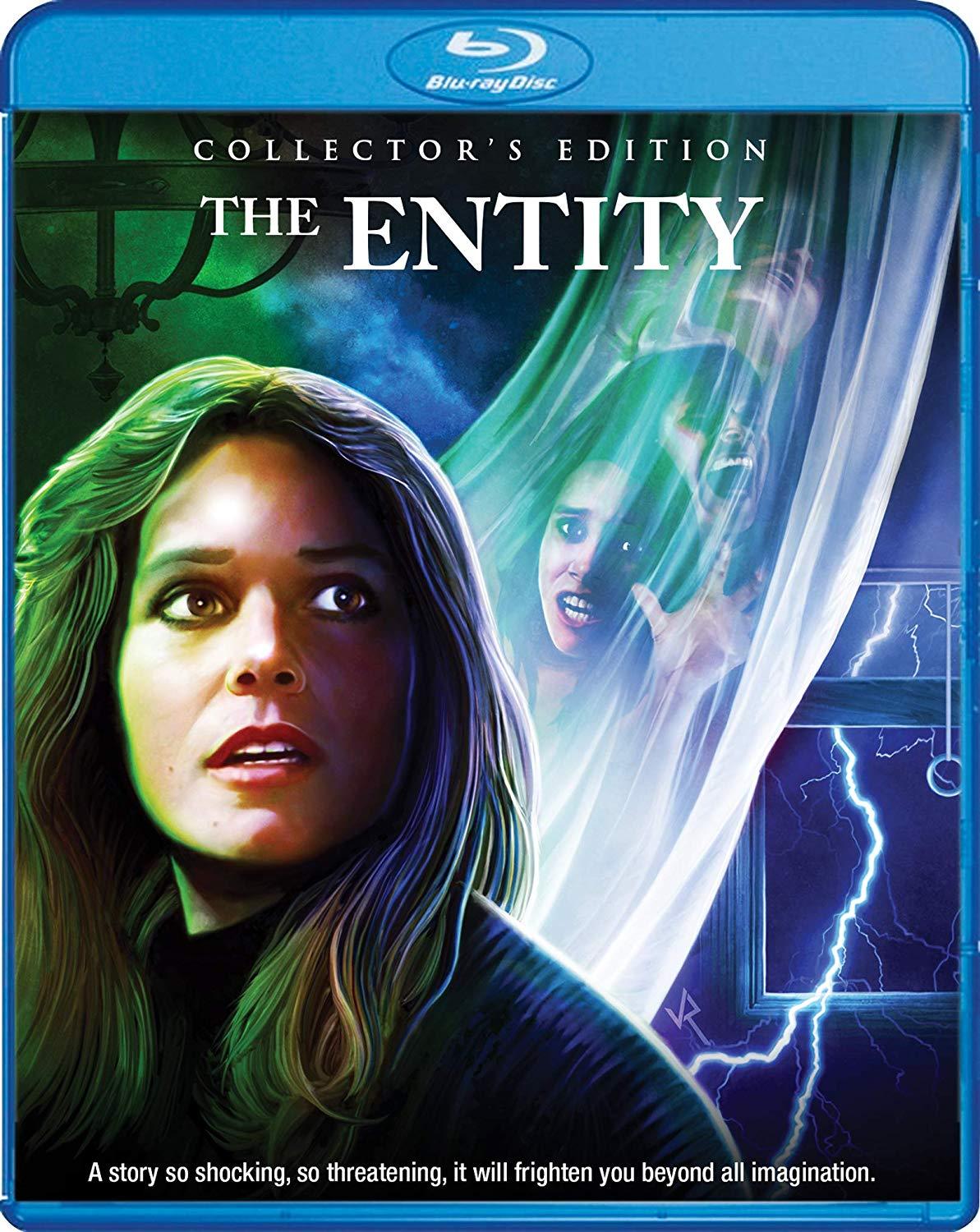 No new transfer, but lots of spectral features

The Entity is a spooky classic that has a lot of great supernatural elements. Scream Factory wasn't able to do a new transfer but they make up for it with a number of extras.
Film
Blu-ray
Reader Rating0 Votes
4
Buy
Amazon

This film review of The Entity originally appeared in a different post on this site.

Sidney Furie’s 1982 film The Entity is based off of a true story, adapted by Frank De Felitta into a novel and subsequently a film screenplay. The actual case of Doris Bither, otherwise known as the Entity Hauntings, is a sad story that most likely had no true connections to supernatural phenomena; however, The Entity as an adaptation certainly enhances some of the events of those “hauntings” into a surprisingly adept look at emotional and psychological trauma and the plight of a single mother attempting to understand her real phenomena while being unknowingly misled by modern science unwilling to allow for mystical acts of nature.

Barbara Hershey plays the afflicted woman Carla, who, as the film explains, has experienced her own fair share of psychological and physiological abuse in her past. The first half of the film finds Furie focusing on Carla’s interviews with Dr. Sneiderman (Ron Silver) after she experiences a supernatural rape and nonsexual assaults. The psychological focus allows the audience to understand Carla as a protagonist and also gives reasoning why she would be left open to these kinds of paranormal attacks; it also forces the viewer to question whether Carla’s experiences truly are part of her own psychic hallucinations.

Both Silver and Hershey give great performances and play off of each other very well. The first hour of the film is some of the most rich and rewarding, not only because of the various attacks in Carla’s home – all quite disturbing due to their sexual nature, sometimes taking place in front of her young children – but also because the film brings up interesting questions about how to define real and imagined trauma. There is a moment, though, where The Entity presents two paths the film could travel. One is more problematic, that Carla truly is hallucinating these events making her a weak character that is a constant victim.

However, De Felitta and Furie choose to take the film in a different direction, treating the entity as a literal manifestation of a dark force and dropping the psychological exploration in the second hour for a paranormal investigation. While some may not like the direction, it is arguably the better decision: the paranormal entity is a real force for Carla to overcome and not some psychological trauma that she has carried with her over time, and it allows her character to strengthen and progress from the timid woman at the beginning of the film.

In this sense, The Entity showcases a great example of a powerful woman throughout. Hershey’s character has overcome past abuse; she’s forged a life for herself and her kids despite some bad experiences; and at the end of the film, she’s found a strength in battling the entity despite its constant presence in her life, even after the film ends. There’s no perfect resolution in The Entity, and Carla’s hauntings presumably continue; but Furie shows us that she’s figured out how to confront the beast, like waging a war. It’s indicative because of the entity’s only piece of dialogue throughout the film: “Welcome home, cunt.” It seems sinister, but more than that, it’s a verbalized threat meant to scare because the entity’s actions no longer affect Carla the way they used to. There’s a powerful motif here, and thankfully it doesn’t rely on Carla’s past vulnerabilities.

Furie’s film is often spooky and disturbing, with some great special effects from Stan Winston and his crew. Charles Bernstein helps by providing a memorable score, and the cast puts in an excellent performance. The Entity might not have the same visceral scares as The Exorcist nearly ten years before it, but its more sexual focus is a welcome addition to the paranormal genre. In many ways, this is an overlooked gem in the horror genre (though many seem to be appreciating it more and more).

The Entity has had a number of Blu-ray releases over the years. In 2012, Anchor Bay put out a Blu-ray with a new HD transfer and that looks to be the one that Scream Factory is using for this Collector’s Edition release; based on some Internet discussion, it appears Scream Factory was unable to license a new transfer for the film but no details have really emerged about that. Both Eureka and Umbrella Entertainment put out international versions of the film as well using a slightly different transfer (though both Eureka and Umbrella appear to share the same one). Below, we’ve provided a few choice screenshots to compare the Umbrella and Scream versions.

As you can see, the Scream Factory/Anchor Bay transfer is a bit darker with more contrast than the Eureka/Umbrella release; it appears that the lightening is in an attempt to mitigate some of the dark, obstructive shadows that tend to get somewhat crushed in Anchor Bay’s Blu-ray. Film grain tends to be a bit more pronounced on the Scream Factory release as well, though colors do pop a bit better than the flatter Umbrella ones. Overall, it’s too bad that Scream Factory was unable to do a new 2k or 4k scan because The Entity has had so many so-so releases and it certainly deserves a little better. Alas, the old Anchor Bay will have to do on this Collector’s Edition, which means Scream has to do a little more to make up for missed opportunities.

The audio side certainly helps, though, because almost every release of The Entity has only contained a 5.1 audio track inauthentic to the original release of the film. Scream Factory provides three different audio tracks here: the aforementioned DTS-HD MA 5.1, a DTS-HD MA 2.0, and a unique DTS-HD MA 4.1 track that was included during 70mm releases of the film. All of these feature good sound quality with the bombastic score from Charles Bernstein, and these two audio tracks should give fans something to look forward to. English subtitles are also included.

Extra features are also in large supply, including four new interviews with cast and crew. Barbara Hershey provides a 16 minute interview about her time shooting the film and talks about the sexual nature of the film (why many other actresses turned it down,), and she seems to have enjoyed her time making it. Actor David Labiosa also loved working on The Entity, reflecting on its themes of not believing women, his background in a less affluent community, and some stories about sightseeing California with Ron Silver. Composer Charles Bernstein has given interviews previously (see Umbrella’s release), but again he reiterates mostly on the composing of the “Thrasher” stings. Finally, editor Frank J. Urioste shares an amusing story about how Sidney Furie asked him to quickly cut a scene and then learned his lesson.

A new audio commentary with filmmaker and Sidney Furie historian Daniel Kremer is also included, with Kremer giving a lot of details about Furie’s stylistic decisions throughout.

Previously available features include a 27 minute documentary “The Entity Files” on the real-life story behind the film, theatrical trailer, a “Trailers from Hell” inclusion, still gallery, radio and TV spots, and a quick Blu-ray credits sequence. The case also sports reversible cover artwork.

While fans will almost certainly be disappointed with the lack of a new transfer on this release, the inclusion of original audio and a number of new extras should certainly appeal to hardcore collectors. For the casual viewer it may not be enough to upgrade from a previously owned Blu-ray; however, it’s a no-brainer purchase if you don’t own any of the existing editions, as it is definitely the most robust of all of those.

Check out our full gallery of screenshots from the Blu-ray and you can also view Umbrella Entertainment’s release gallery.