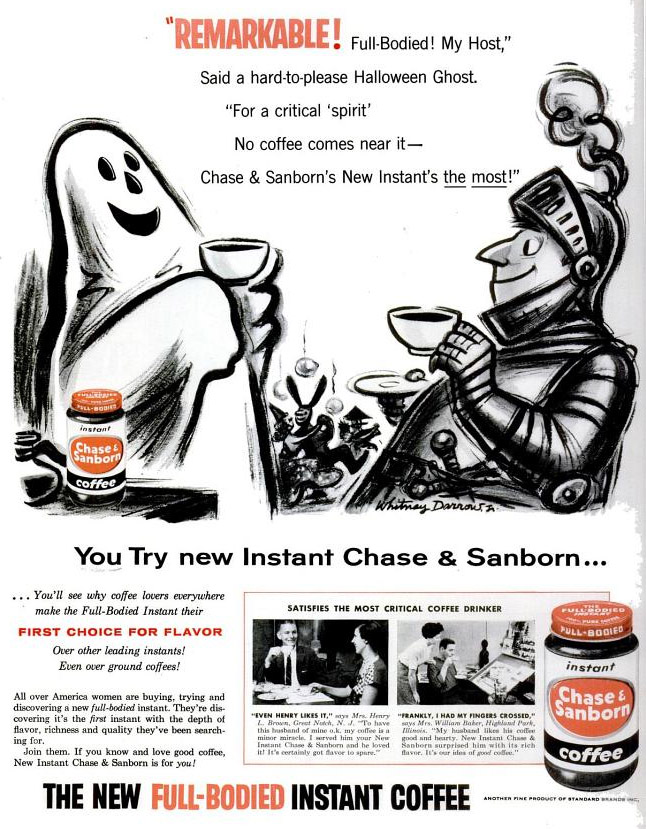 I think I can speak for many people when I say that coffee is often a favorite foodstuff of Halloween. Kids sitting down after a chilling night of trick-or-treating, steaming coffee mug in hand: what could be better? I joke, of course, but there have been a couple of coffee-related Halloween ads in the past meant to sell product using imagery from the night of treats and tricks. While you don’t see it too often anymore – Folgers and Maxwell House just aren’t interested in Halloween, I guess – check out the two ads featuring old coffee brands below.

Chase & Sanborn’s Halloween advertisement is a curious idea; there’s very little context contained in the image itself besides the revelry happening in the background behind our two costumed protagonists. However, it’s clear that party-goers prefer the taste of Chase & Sanborn to any other coffee; or perhaps it’s just because they were forced to drink it as the ad’s directive states: “You Try new Instant Chase & Sanborn.” It’s not asking you, it’s telling you. At least it’s better than their more blatantly abusive other advertisement.

You want to get a good night’s sleep for Halloween, right? Well then rely on Sanka Instant Coffee, because that keeps the witches and bad stuff away. The only question is why the hell anyone would want to drink coffee that’s 97% “caffein” free! Still, gotta love that classic Halloween imagery.

Here’s one for Maxwell House and M&M’s together, featuring their Master Blend line. I don’t think the coupons will still work but you’re welcome to give it a try. I would love to have that kitchen though – an orange counter with black backsplash!?

Finally, this is a little bit of a stretch, but here’s an advertisement for Halloween Addams Family coffee mugs! I really wish I could find some of these now…