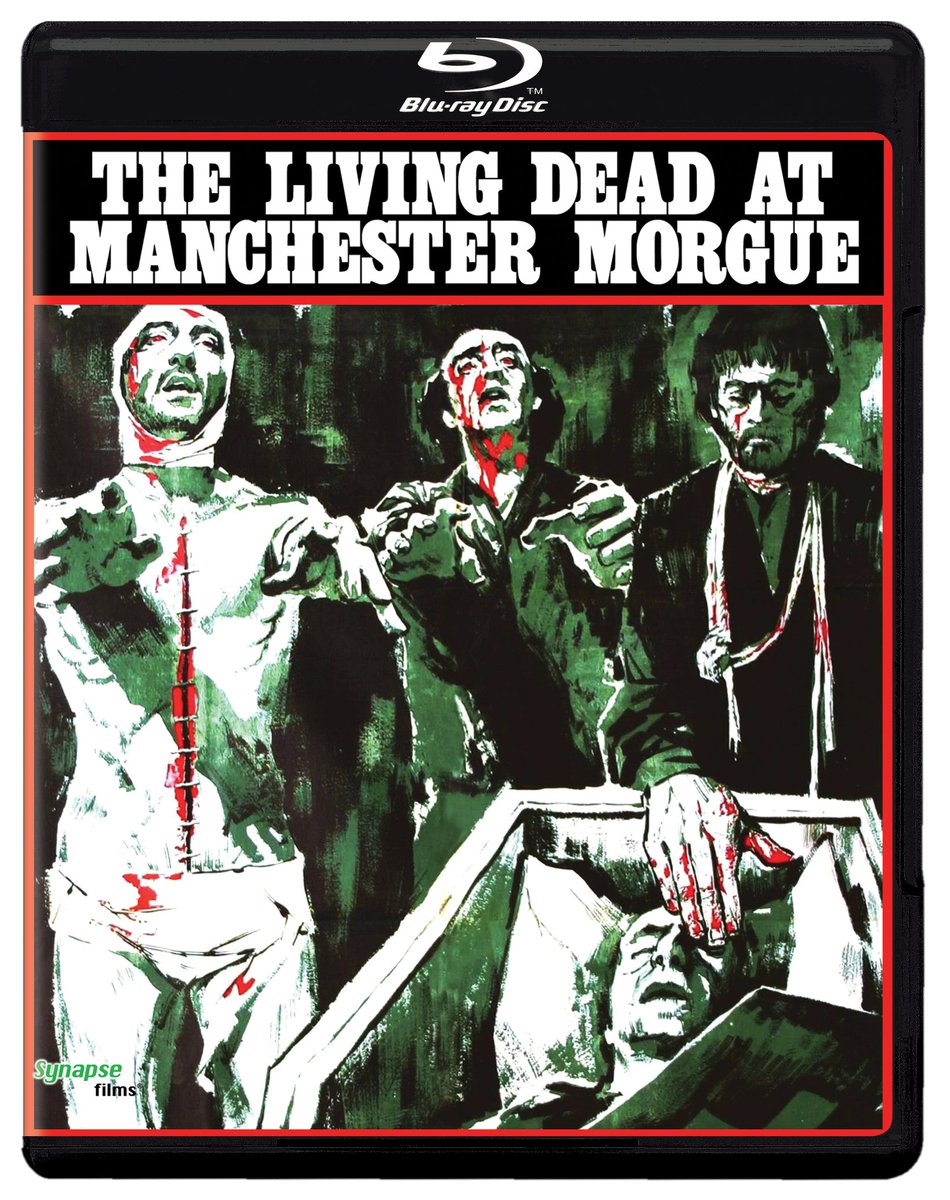 These dead are hungry... for breasts!

The horror world tends to have issues with renaming zombie movies, so let’s get this out of the way right now. Synapse Films has released the film under the title The Living Dead at Manchester Morgue, but the film has also gone by Let Sleeping Corpses Lie, Don’t Open the Window, and most confusingly, Zombi 3! Whatever you want to call it, though, this is the 1974 living dead classic from Jorge Grau, a joint Spanish/Italian production that clearly took inspiration (or, you know, some copying) from George A. Romero’s masterpiece Night of the Living Dead to craft a very similar version of events filtered through an environmentalist lens.

This time, though, the zombies are in England – specifically around the city of Manchester and its surrounding areas. Ray Lovelock plays George, a motorcycle enthusiast and antique shop “hippy” who is unfortunately sidelined when Edna (Christina Galbo) accidentally backs into his bike at a gas station, forcing him to stay near town with her while it goes in for repairs. Edna’s sister’s husband is murdered, and of course the local inspector (Arthur Kennedy) immediately fingers George because of his “faggot” style of clothing and hair – you know, the usual suspects. However, the morgue soon indicates that the rash of murders is not a random serial spree, but in fact the dead come to life thanks to a new insecticide meant to kill all bugs in a miles-wide radius that is instead seriously annoying the rest of some corpses.

While The Living Dead at Manchester Morgue clearly has a number of different variation points from Night of the Living Dead, its overall atmosphere is remarkably similar. The slowness of the zombies, the verdant but ultimately sparsely populated setting, and the character similarities all give the film a feeling of tonal authenticity that makes it a spiritual sequel to Romero’s classic. Its finale, too, seems particularly derived from the shocking political commentary at the conclusion of Night.

However, Grau takes some clear detours from the general approach of the early zombie film. For one, the script (written by Sandro Continenza, Marcello Coscia, and uncredited Juan Cobos and Miguel Rubio) gives the origin story of these zombies, however loose it may be. Like many of the other wildlife films of the time, The Living Dead at Manchester Morgue explores the proliferation of toxic chemicals and radiation during the time period, with a pretty explicit condemnation of the destructive science being employed by insecticides and even mentioning DDT by name. Even with Grau pointing the blame at environmental catastrophe, the film leaves actual transmission of infection up to various elements – blood, bite, and even stillbirth!

Grau also increases the blood and body count a bit. Obviously Night of the Living Dead‘s black-and-white approach limited the gore onscreen, but here zombie effects are heightened with more gruesome decomposition and the aforementioned zombie baby is particularly grim. And aided by a moody score Giuliano Sorgini and the macabre set design of the morgue, The Living Dead at Manchester Morgue is notably eerie because of its adherence to classic but menacing death makeup.

The Living Dead at Manchester Morgue is just as subversive as Romero’s opus, and it picks up right where Night of the Living Dead left off before Romero would go on to reinvent the subgenre again with Dawn of the Dead. Grau’s zombie film is just as compelling now as it was nearly 50 years ago, and it’s certainly a must-see for any horror fan even if it doesn’t get as much recognition as the rest of the zombie canon.

Synapse Films originally released The Living Dead at Manchester Morgue with a three-disc steelbook collector’s edition, which included CD and liner notes. Now they have brought the film back to Blu-ray with a standard edition that excludes the additional content but maintains all of the same extras as the steelbook version.

The Blu-ray features a new 4K scan of the original 35mm camera negative, which looks absolutely fantastic. Strong detail is apparent throughout the film including background visuals, signs, and other minutiae; skin textures and fabrics are also well-represented. Grain is medium-bodied but never oppressive despite the many lighting changes, and dark scenes still maintain good delineation. Color timing and contrast is also excellent. It would not surprise me in the slightest if Synapse Films eventually releases a 4K UHD package with this same transfer, so that would be the only caveat for holding off on grabbing this standard Blu-ray.

Audio is presented with the original theatrical mono mix with a DTS-HD MA 2.0 mono track. Also included is a new DTS-HD MA 5.1 remix track specifically created for this release. The 2.0 mono track sounds fairly good, though it does suffer from some occasional muffled textures that is not surprising based on the age and production of the audio. The 5.1 track sounds good and features the same basic elements of the mono except for more audible use of the satellite channels for sound effects and music. While most purists will stick to the original mono, the 5.1 mix is nice to have to enhance the audio atmosphere. English subtitles are also included.

Extra features are the same from the steelbook (excluding the CD). The biggest offering is a new feature-length documentary on director Jorge Grau specifically focusing on The Living Dead at Manchester Morgue, which interviews a number of critics along with Grau’s last interviews. This one’s definitely worth a watch, particularly if you want Manchester Morgue-related tidbits. Also included is a new interview with special effects creator Giannetto de Rossi, who discusses his work on this film and Zombie. Additionally, another interview with de Rossi is featured from his Q&A at Festival of Fantastic Films. Also two new audio commentaries are provided, one featuring the duo of Bruce Holecheck and Nathaniel Thompson and the other with Troy Howarth. Both are great informational dips into the movie, entertaining but also contextually relevant.

This release of The Living Dead at Manchester Morgue is truly excellent and presents the film in the best possible quality – for now, until Synapse releases it on UHD. Regardless, if you don’t already own the steelbook and aren’t opposed to a potential upgrade coming soon, this standard Blu-ray is worth being in your collection. 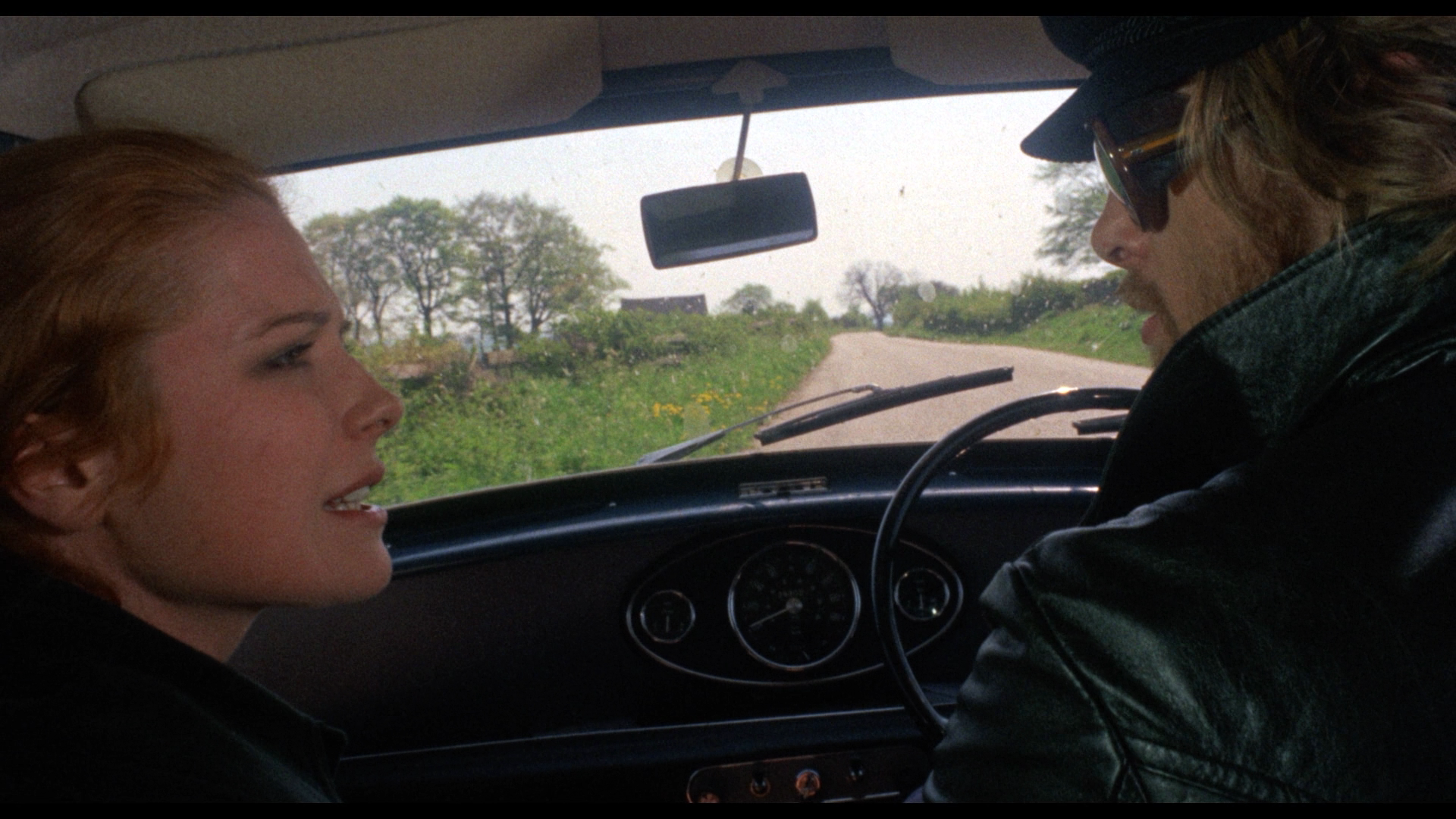 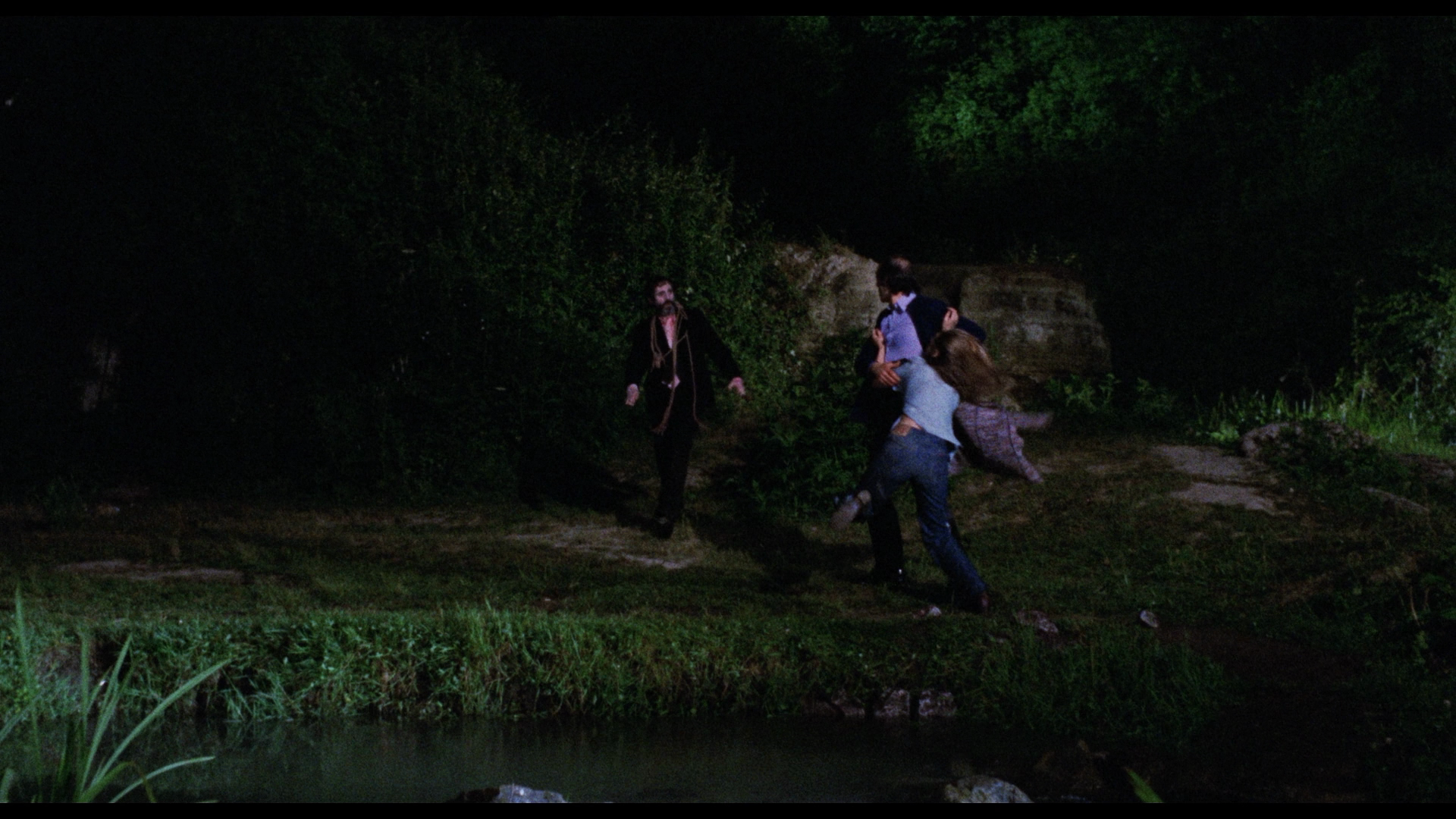 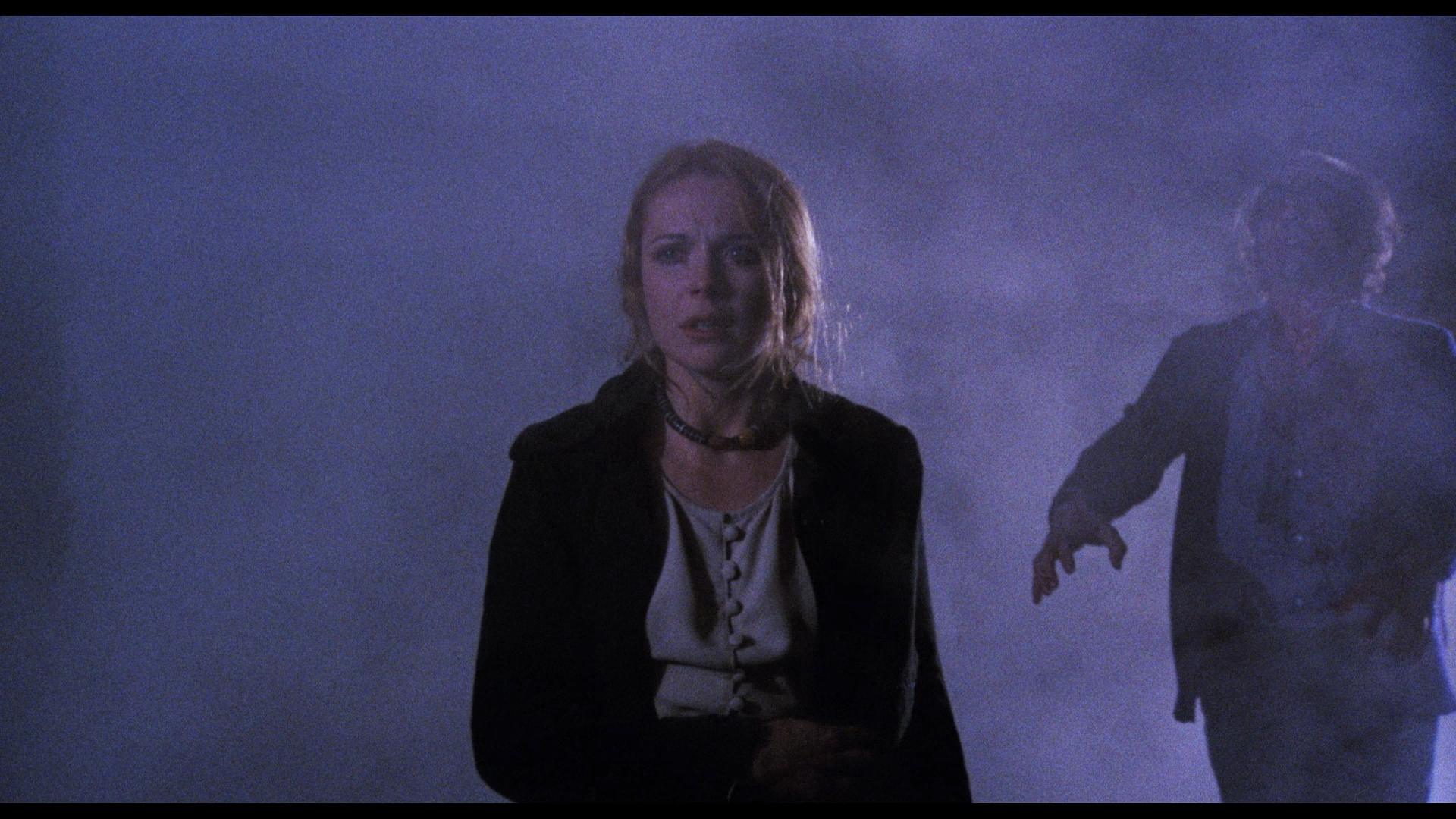 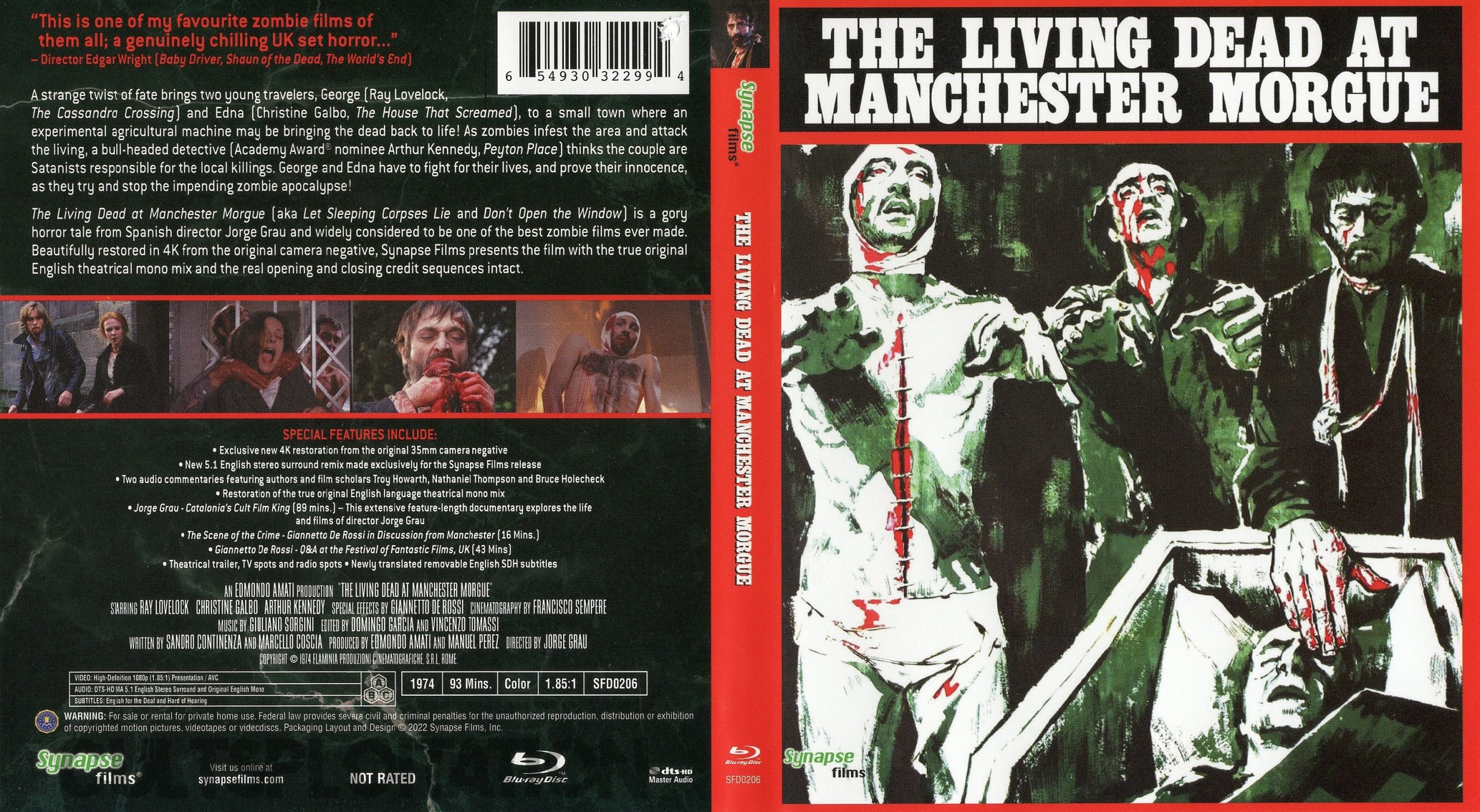 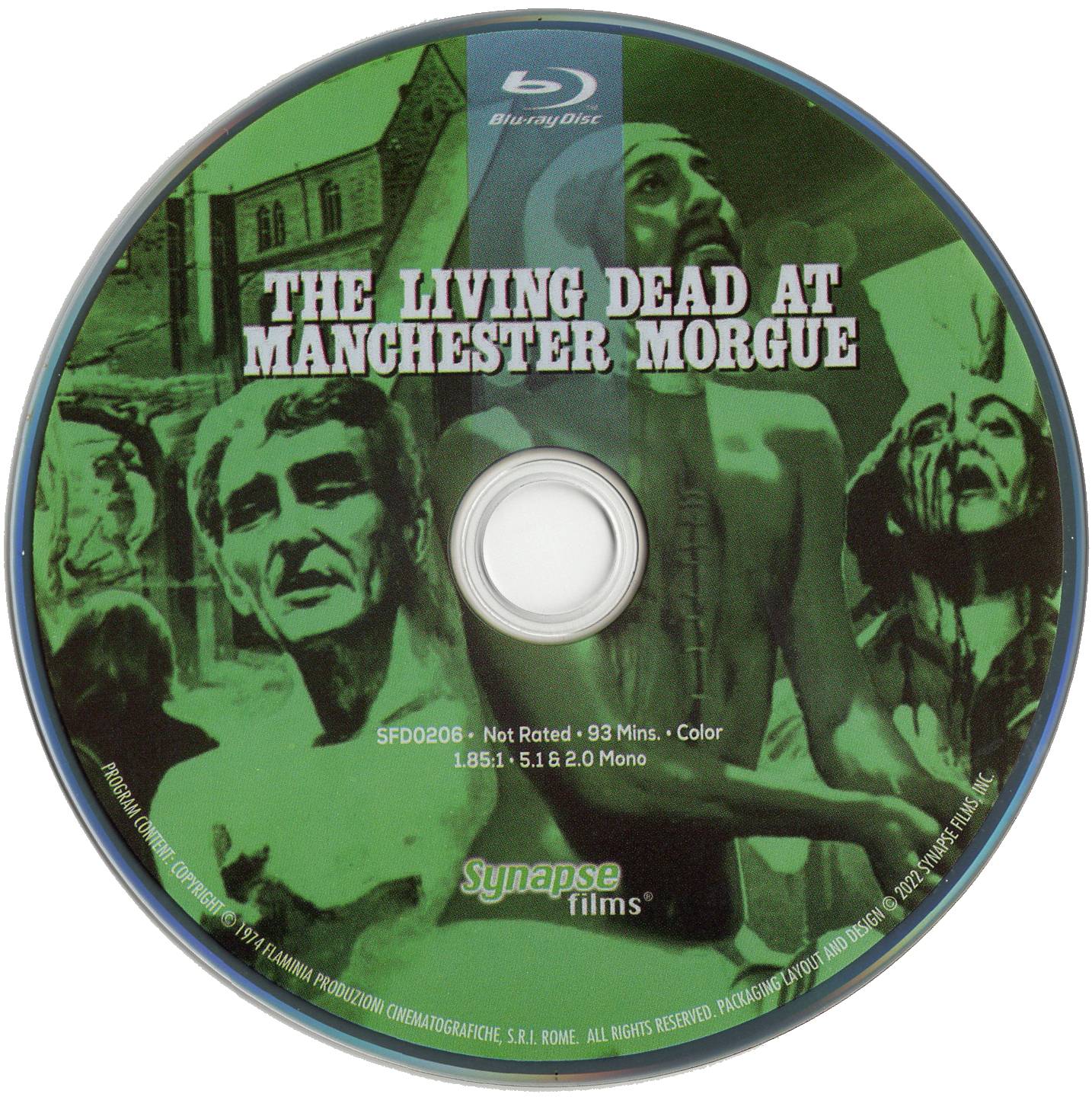