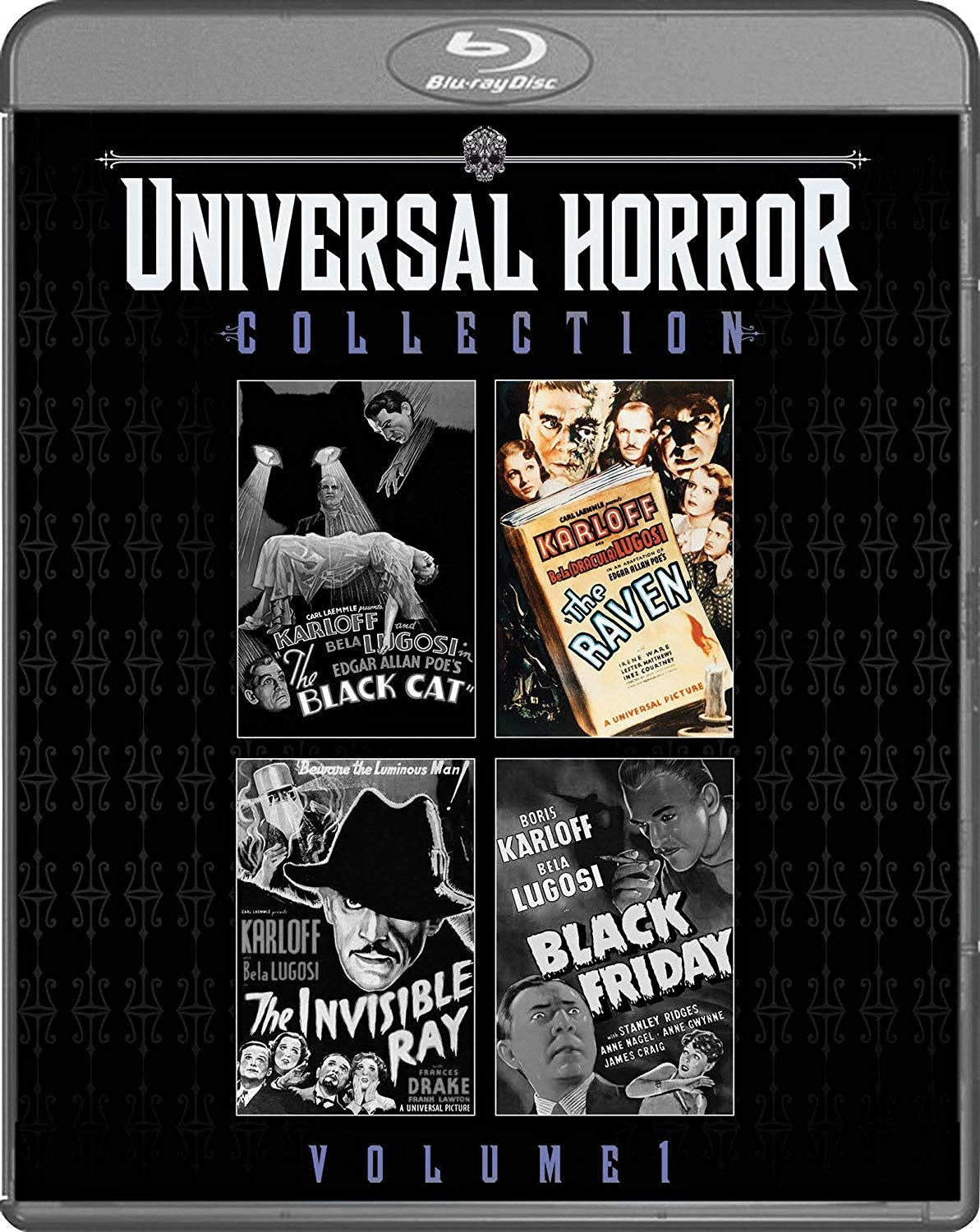 Karloff and Lugosi are both good in The Raven, but Lugosi definitely shines. Another good disc in the Universal Horror Collection Volume 1, with about the same amount of extras as The Black Cat.
Film
Blu-ray
Reader Rating0 Votes
3.5
Buy
Amazon

Boris Karloff and Bela Lugosi again joined forces in 1935 with The Raven, a film inspired by Poe’s stories including his poem “The Raven” and “The Pit and the Pendulum.” Unlike The Black Cat, the two swapped roles a bit; though Karloff gets top billing, it is Lugosi who leads much of the film, with Karloff absent until about 30 minutes into the film. Here, Lugosi is playing one of his most wicked characters, Dr. Vollin – not even a true mythical monster, but a man influenced by Poe to commit some of the most torturous acts from his works. Karloff plays his deformed asssistant/assassin Bateman, a street criminal on the run from the police who unfortunately falls for Vollin’s demented plans and is disfigured for his troubles. The whole thing culminates in a group of people staying at Vollin’s place so that he can get revenge on Jean (Irene Ware), a woman who declined Vollin’s advances, and her father Judge Thatcher (Samuel S. Hinds) who recognized the doctor’s insanity.

Again, The Raven is less an adaptation of Poe’s work than inspired by them, and it shows how the warped Vollin misunderstands the metaphors inherent in those stories. Lugosi’s acting is truly unhinged here, and though there are a few stumbles, his insanity is palpable and he certainly shines over Karloff because Bateman is quite literally cowed by Vollin. Karloff has the more difficult job, though; his face is basically cemented with makeup for his deformity, making it difficult for him to move half of his mouth. Both play off each other quite well, but it is Lugosi who comes out ahead as an incel character chuffed at being rebuked by a pretty, married, woman.

While some of the seams certainly show in this hastily-made movie, director Lew Landers keeps things flowing quickly and there’s really no downtime here. One could also argue that The Raven plays off of both Karloff’s and Lugosi’s best roles by hearkening back to both Dracula and Frankenstein. Fans of the two actors will definitely love seeing the two of them head-to-head here, and the torture devices Lugosi employs are gruesome just by inference, even if the actual torture act is not displayed. This is definitely a fun one, just with a couple of production flaws due to its rushed filming.

The Raven gets a new 2k scan of the original film elements, and while the source certainly has some age spots, for the most part the result is a sharp-looking image that is pretty similar in quality to The Black Cat. There aren’t the deep darks of that film, but the close-up shots are pretty well-defined despite the heavier grain field. The opening of the film does have some apparent damage including a consistent couple of lines through the center of the picture. However, those do clear up after the first couple scenes and the rest is mostly damage-free. Again, a good picture despite the film’s age.

Audio is again a DTS-HD MA mono track which did tend to fluctuate in sound quality for the dialogue, with the volume wavering between normal and a bit too soft. Otherwise, though, no tinniness or muffling. English subtitles are included as well.

Extras include two new audio commentaries, one from Gary D. Rhodes and another from Steve Haberman. Both are based on the context of the film and enumerate on actors, production, and more. The second part of the “A Good Game” featurette is about 17 minutes and again discusses how each actor would feel about The Raven, with Karloff in particular not super happy about the film but contractually obliged to star. Rhodes also surmises that Lugosi would have had a bit of glee in literally lording over Karloff as the star of this picture. Also included is a reading of “The Tell-Tale Heart” by Bela Lugosi and a still gallery.

The Raven isn’t the best Karloff/Lugosi team-up but it does give Lugosi a chance to shine over Karloff. This disc in the Universal Horror Collection Volume 1 set features solid picture and a nice bit of extras including the excellent second part of the “A Good Game” featurette and two good commentaries.