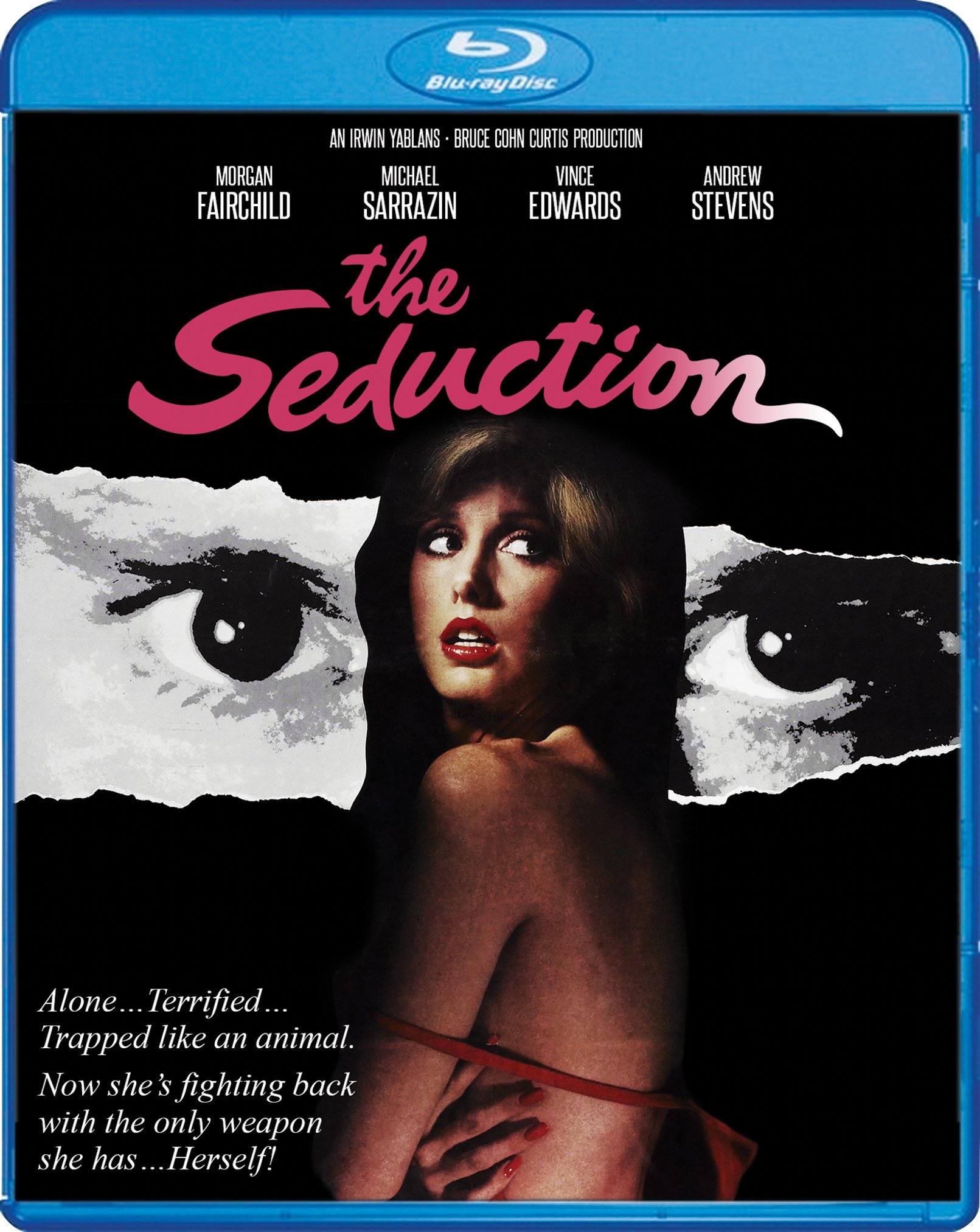 The Seduction might not be as tempting as hoped, but Scream Factory has done a good job with this release collecting new and old extras.
Film
Blu-ray
Reader Rating0 Votes
4.1
Buy
Amazon

Director David Schmoeller followed up his cult classic Tourist Trap with the Morgan Fairchild-led The Seduction in 1982, a stalker thriller that finds the buxom leading lady a victim of an obsessed photographer fanatic who also unfortunately lives next door to her massive mansion. Fairchild’s sultry deep voice is a perfect fit for her character Jamie Douglas, a successful anchorwoman on a prize-winning nightly news program, and at the beginning of the film she announces her total happiness with her life and boyfriend Brandon (Michael Sarrazin). But once Derek (Andrew Stevens) begins peeping on her, making annoying phone calls, and showing up to her work, her stress level goes through the roof, threatening her career and her life.

Schmoeller, who writes and directs the film, creates a fairly generic stalker scenario out of The Seduction‘s various parts. And what’s more, the film never hides its stalker’s identity – right from the start, Derek becomes something of a focus for the film as Schmoeller explores both players in the stalker/stalkee scenario in almost equal measure. However, the film rarely dives into Derek’s motivations besides his physical obsession with Jamie; sometimes Schmoeller provides opportunity for this introspection, only to frustratingly move away from it again. The result is a paint-by-numbers stalker with almost no surprises except for some criminal escalation on Derek’s part.

While Fairchild obviously has the smoldering sexiness to sell this obsession, her character’s personality leaves a lot to be desired. Bluntly, she’s boring; she swims in pools, does her job, and occasionally likes to buy expensive things at the store or hit the gym. Ironically, her friend Robin (Colleen Camp) is a lot more interesting and should be the object of Derek’s desire, and even Julie (Wendy Smith Howard), with her unrequited love crush, is more personable. With the plot so staid, The Seduction could use a bit more… seduction.

Still, though it’s highly generic, The Seduction still holds the viewer’s attention for most of the film, at least until the unnecessarily drawn out conclusion. Lasting almost 20 minutes, the climax is far too slowly paced for its own good, languidly moving from scene to scene as Jamie finally gets her comeuppance. Again, no surprises here, no strange reversals or plot twists: just the film trotting its way to its inevitable end.

Stalker films come and go, and very few are good enough to really stick in the pantheon of cinema history. The Seduction is one of those, a film that could easily have become a Lifetime Original Movie if had been made today. There are definitely worse examples of this type of movie, but formulaic and boring should not be a claim to fame.

Scream Factory has released The Seduction on a new Blu-ray but they have not defined any source. Even so, the quality is quite good – colors are particularly lush, grain is at medium presence, and contrast and detail are both pretty good. Film damage is nonexistent, and the only major flaw that stands out is the occasional waxy skin tone.

Audio is a DTS-HD MA mono track and it sounds good, with a vibrant synth soundtrack and proper dialogue levels. English subtitles are also included.

For extras, Scream Factory has put together three new interviews with some of the main cast. Morgan Fairchild appears in her glory for a 22-minute session discussing her work on the film, and Andrew Stevens gives a briefer 11 minute interview. Producer Bruce Cohn Curtis also spends some time talking about his work behind the scenes. The rest of the extras were all previously available, including an audio commentary with Curtis, producer Irwin Yablans, and director David Schmoeller. Three vintage featurettes are included as well, with interviews with the aforementioned crew, Colleen Camp, Kevin Brophy, Tom Curtis, location manager Charles Newirth, and an interview about the film’s themes on the law.

The Seduction is a fair stalker film even if it does lean on generics a bit too much, but fans of the flick should certainly be excited to see this get a nice Blu-ray release with a quality transfer and a number of new extras with primary cast and crew.