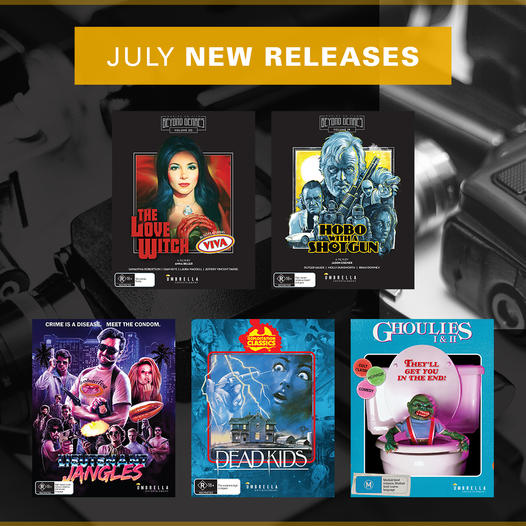 Australia’s own Umbrella Entertainment have announced their new Blu-ray releases for July. Below is the lineup.

Hobo with a Shotgun (Beyond Genres #19)

Moving from town to town, a ragged vagabond ends up in the criminal haven known as Hope Town. Run by the sadistic crime lord, Drake, and his equally brutal sons, Ivan and Slick, the God-forsaken city is rife with the scum of the Earth, who run rampant, of course, with the blessing of the corrupt local police. Under those circumstances, the disgusted nameless drifter decides to take matters into his own hands, and clean up the streets of the Drake infection. Now, his high-power, 20-gauge shotgun becomes the messenger of destruction and change. Who can stand in the way of the hobo’s rightful, pump-action retribution?

The Love Witch (Beyond Genres #20)

Elaine, a beautiful young witch, is determined to find a man to love her. In her gothic Victorian apartment she makes spells and potions, and then picks up men and seduces them. However, her spells work too well, leaving her with a string of hapless victims. When she finally meets the man of her dreams, her desperation to be loved will drive her to the brink of insanity and murder. With a visual style that pays tribute to Technicolor thrillers of the 60’s, THE LOVE WITCH explores female fantasy and the repercussions of pathological narcissism.

Galesberg, Illinois is a quiet, peaceful college town where nothing ever happens… until a brutal serial killer begins a terrifying campaign targeting local teens.As fear mounts, Police Chief John Brady (Michael Murphy) begins to suspect a link between the gruesome crimes and a series of secret experiments being carried out in the College’s psychology department.Written by Oscar winner Bill Condon (“Gods and Monsters”), directed by Michael Laughlin (“Strange Invaders”) and featuring an original score by Tangerine Dream, “Dead Kids” is an 80s cult fave with all the right horror ingredients: small town teens, brutal murders, mysterious experiments and an infamous syringe-in-the-eyeball scene.

It’s the mid 1980’s in the most crime ridden city of Australia. Only one man keeps the scales of justice even. Cowboy Detective, Lieutenant Jangles. After his partner is killed in a blazing shootout, Jangles goes on an explosive and blood soaked mission to avenge his death. His quest for vengeance unintentionally makes him the enemy of a mysterious new crime boss, who has been quietly taking over Brisbane City. When their paths finally cross, one thing is made clear, this town isn’t big enough for the both of them.

As a child, Jonathan (Peter Liapis) was almost killed by his father, Malcolm (Michael Des Barres), during a satanic ritual. After being saved and raised by Wolfgang (Jack Nance), who has kept him unaware of his background, Jonathan inherits Malcolm’s house and moves in with girlfriend Rebecca (Lisa Pelikan). Through his explorations of the house, he begins unlocking the secrets and latent powers contained within his new found home. But there are other dark powers at work in the house powers more terrifying, more hideous than anything you’ve ever seen. It is foretold that Evil will triumph and Ghoulies will walk the earth…

The Ghoulies are back and more devilish than ever, as they turn an unsuspecting carnival into a house of pandemonium in this wildly outrageous sequel to the original smash hit “Ghoulies”! “Satan’s Den” has received its final warning either the not-so-creepy House of Horrors spooks-up its act and scares some customers fast or its gateway to hell will be closed for eternity. Just when Larry Prentice (Damon Martin) and his uncle Ned (Royal Dano) think there’s not a ghost of a chance that the’ll save their show, they get some uninvited visitors to spice things up. The Ghoulies make “Satan’s Den” their home and profits soar as the demonic little creatures wreak havoc on the helpless fairground. So take a ride on the Ghoulie-Go-Round and play some Bumper Ghoulies – enjoy yourself because the Ghoulies will always get you in the end!

“There are those who believe that life here began out there.”In the deepest reaches of space, it is a fight to save all human life from extinction in this thrilling sci-fi adventure! After the Cylons launch a devastating surprise attack on the Twelve Colonies, a lone flagship battlestar, the Galactica, remains to aid the surviving colonists on their epic journey for a new home on a far-off legendary planet – Earth. They must survive the pursuing Cylons in a series of epic battles that will deterime the fate of the human race in this non-stop action-packed classic.

Buck Rogers in the 25th Century

“The original space man! The ultimate trip!!”Blast off to the 25th century with Buck Rogers, one of the most popular sci-fi heroes of all time! When 20th century astronaut William “Buck” Rogers (Gil Gerard) is awakened – 500 years after a deep space disaster – to an Earth in recovery from nuclear war, he must join Colonel Wilma Deering (Erin Gray) to lead the crew of the starship Searcher against a galaxy of evil from the past, present and faraway future.