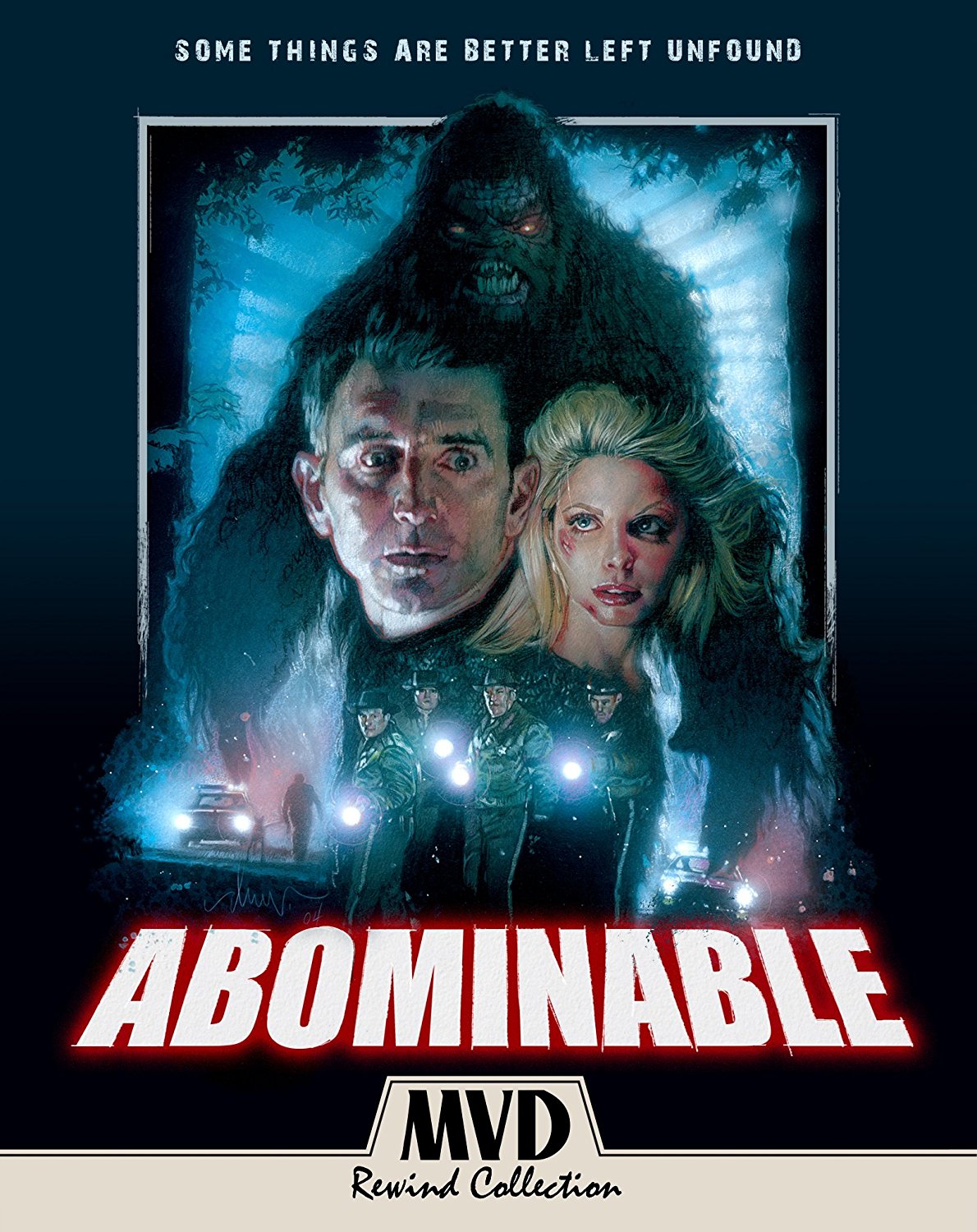 Abominable is a solid attempt at a Bigfoot monster film with practical effects and it's a well-crafted feat. MVD Rewind has given it a definitive release with a new 2k scan and a new version of the film, plus the original 2005 version and a couple of new features in an impressive package.
Film
Blu-ray
Reader Rating0 Votes
4.3

A disabled man troubled by his wife’s death after rock climbing returns to the area with his aide, staying in a cabin deep in the woods; similarly, a group of 20-something girls are staying next door. All of them are unknowingly food and fodder for the abominable monster that also lives in these woods, who immediately begins to rip, shred, and eat his way through the fresh bodies that have been camping in his home. Only Preston can help himself and another young woman out of the woods using his wits and his rock-climbing skills. 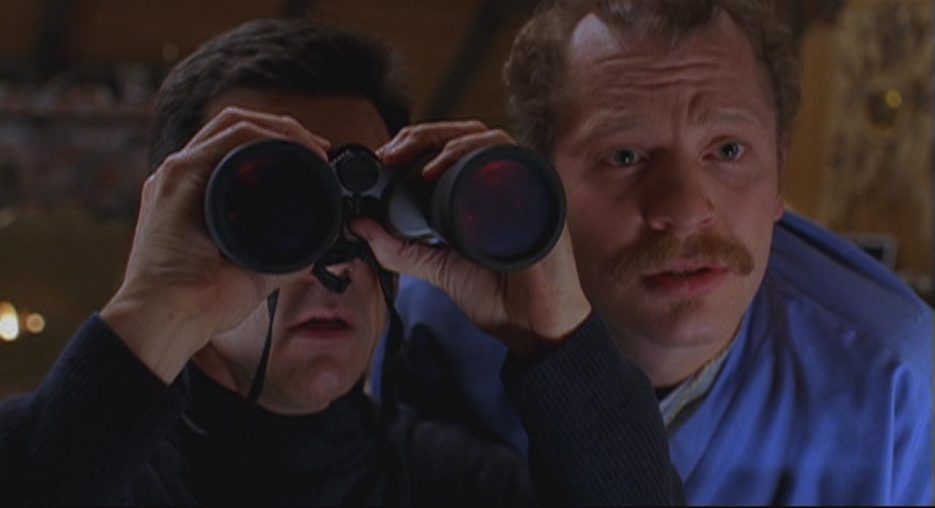 Ryan Schifrin’s directorial debut Abominable clearly takes its inspiration from Alfred Hitchcock’s classic Rear Window, a story about voyeurism and Jimmy Stewart who can’t leave well enough alone. In this film, though, Schifrin replaces a neighborly homicide with something that’s presumably a lot more rare to see out a window: the appearance of a gigantic hairy creature living in the snowy forests, terrorizing campers who happen to set foot in his territory. Equal parts Rear Window and “Nightmare at 50,000 Feet,” Abominable cleverly showcases Schifrin’s favorite features while diving into cryptoid lore, opting for a simple story that adheres to its low budget while capitalizing on the savings from the film’s location setting to create some great practical gore effects.

The film follows Preston (Matt McCoy), a disabled man still trying to recover from the emotional scarring of his wife’s death after a rock-climbing fall that also left him paralyzed from the waist down. He returns to the familiar area after a rash of killings and sightings of a Bigfoot-esque creature, and as he settles in to try to forget about his memories, he becomes engrossed in staring out the cabin’s big picture window with his binoculars. It just so happens that a group of young women are unlucky enough to be camping in a next-door cabin, and they’re prime food source for the abominable monster lumbering around the hills.

Schifrin’s direction is slow but interesting, setting the tone of the film early thanks to McCoy’s slightly paranoid character. It’s pretty clear that Preston has some issues going on – and at times the film explicitly spells them out with dialogue or the unfortunate sepia-tinged flashback to the rock-climbing accident – but it never feels like Abominable wants its audience to distrust him. Instead, it continues to build sympathy for him as it continues to showcase Preston’s awful treatment at the hands of his aide Otis (Christien Tinsley). While it’s not exactly groundbreaking character work, it does add some nuance to an otherwise simple story. 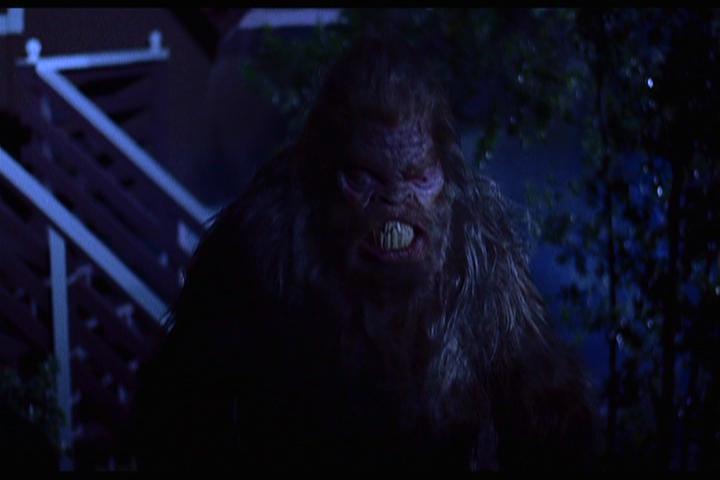 From there, Schifrin launches right into the Hitchockian odes to Rear Window, with McCoy even looking the part of Jimmy Stewart. Unlike Disturbia, though, Abominable goes in a far different direction; it’s apparent that this is homage rather than a straight-up retelling of Rear Window, and once the Abominable Monster lumbers into the picture, the plot changes quite quickly. The Monster itself is far from perfect, but it’s all done on a shoestring budget with practical effects; while it’s easy to see that this is just a guy in a suit, it’s a bit more tactile than the CGI creature affairs that sprang up after this film’s release.

The practical gore effects, though, are truly well-done, and there are plenty of them throughout the film. Schifrin’s direction is swift and the film never languishes on one scene despite a relatively rigid location setting. Because there are two primary cabins involved, there’s room for Schifrin to cut back and forth between the two places; that way he can get in the Stewart-esque voyeurism and character building for Preston, and he can also quickly get to bloodletting or nudity when necessary with the girls. Again, it’s not a movie marvel, but Abominable is a fun film that knows exactly what kind of movie it’s striving to be.

In this way, Abominable is supremely likable. It has the air of classic Bigfoot tales like The Legend of Boggy Creek and the visual impact of Rear Window while also recognizing its own B-movie limitations. Its most problematic element is the Monster itself, which would have been better left off-screen until the very end and the finale’s spooky reveal. Still, viewers could do a lot worse when trying to find a Bigfoot/Sasquatch/cryptoid film than Abominable, and for such an indie work, it’s surprisingly agile for such bigfeet.

The gore effects are great in this film and there’s a large number of them. They’re all done with practical effects and get quite bloody; my favorite is a head-chomping scene that has great execution. Overall, though, this is a triumph for this low-budget film.

There isn’t a lot of that here despite its young coed population, but Tiffany Shepis does shed her clothes for a fully-nude shower scene. Thankfully, Preston captures it all with his binoculars. Haley Joel also shows brief buttcrack. 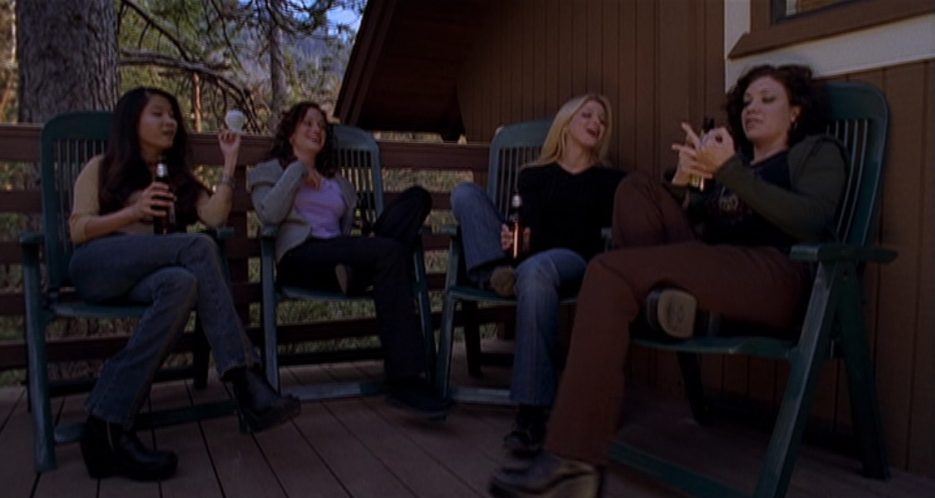 MVD Rewind has brought Abominable to HD with a new 2-disc Blu-ray/DVD combo package. Despite being released in 2006, the film was never given an HD scan – it was shot on 35mm. This edition includes a new 2k scan from the original camera negative that includes a new version of the film, as well as including the original 2005 version of Abominable. The film itself is almost exactly the same save for a couple of minutes shaved off of the new cut, some credit changes, and CGI effects for the eyes; however, the new version is the one with the HD scan, while the other 2005 version is presented in HD.

MVD Rewind has done a great job with this scan, and if one wants to see how great they should check out the standard definition version first. The film’s color is well-represented and MVD Rewind has made sure to fix many issues with dark and shadowy scenes that had been problematic during the SD cut. Grain is kept significantly light, and ultimately this film looks the best it ever has and possibly ever will look. Really excellent work here.

Audio comes in 5.1 DTS-HD Master Audio for the new version of the film and sounds very good thanks to a number of ambient sounds that pepper the film, including wind noises, tree rustling, and some deep bass booms. There’s also a 2.0 LPCM track for the original 2005 version; be careful when picking from the menu, because if the 2.0 is picked it will immediately start playing the 2005 version rather than the new scan. No subtitles for this feature.

MVD Rewind has assembled a number of bonus specials for this Blu-ray, including an 8-minute intro to the film by Schifrin who discusses why a new version of this film exists and the updates that were made and “Basil & Moebius: No Rest for the Wicked,” a short film from Schifrin. The rest of the inclusions were already available on a previous release, but it’s still nice to have them collected; this includes audio commentary with Schifrin, Matt McCoy, and Jeffrey Combs, a lengthy making-of featurette with archival footage and interviews with a lot of the cast, deleted and extended scenes, bloopers, and the short Hitchockian-inspired “Shadows.” Theatrical trailer, poster/still gallery, and storyboard gallery are also contained on this release.

The package also gets a slipcover and a pull-out poster with the cover artwork. This is a great release for fans of the film but also for those who missed out before; it collects all old content, and thanks to the new version of the film, this is the definitive Abominable release.

Check out our list of Bigfoot films you should watch if you liked this movie.