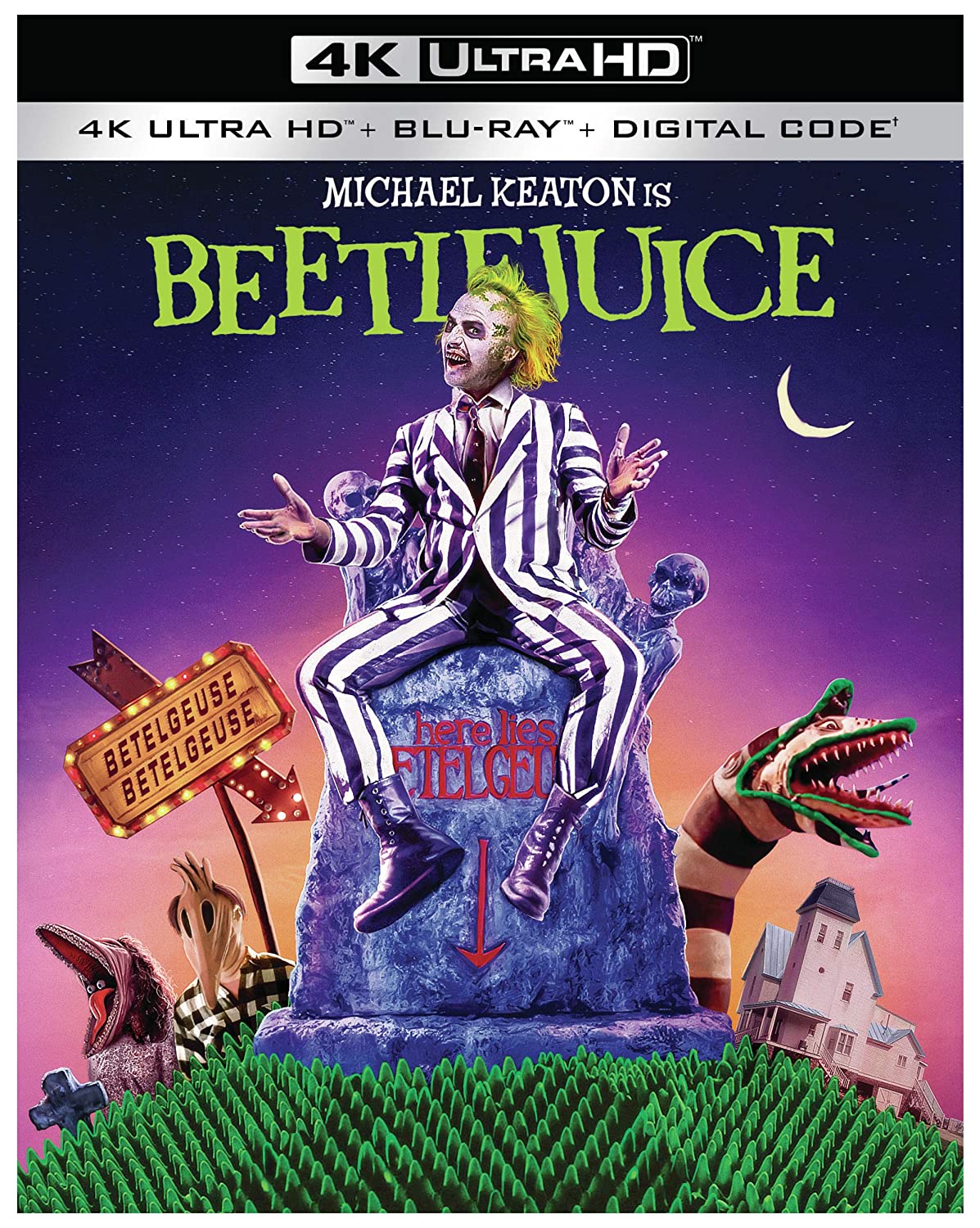 The Handbook for the Recently Deceased. Alec Baldwin and Geena Davis as ghosts in sheets. A young Winona Ryder as a Wednesday Adams stand-in. “The Banana Boat Song.” And of course, Michael Keaton in one of his most evocative performances. Any of these small details should immediately bring Beetlejuice to mind, Tim Burton’s wondrously creative 1988 film that envisions the land of the dead as a boring, corporate area much like the DMV. The film has been a cult classic for years, routinely shown for Halloween on various platforms and even revitalized by the announcement of a sequel sometime in the near future. And now, Warner Bros. gives it the glamorous 4K UHD treatment on a new release that effectively enunciates every detail of the film, from the background wallpaper to the colorful lighting of the Adam’s town model.

Beetlejuice is such a successful film because of its actor dynamics. Davis and Baldwin are at their best here as the confused dead couple, who quickly go from lovingly restoring their old farmhouse to pondering the intricacies of life after death in the first few minutes of the film. Their chemistry is palpable, and routinely they make for the best scenes – and not just because they usually get the most humorous action.

And it’s interesting that the film’s namesake – though with a different spelling (Betelgeuse) – is mostly missing from the majority of the film. Instead, it’s the idea of him that carries the film forward, his name rarely uttered due to the threat of invoking him. Keaton is great as the gratingly over-the-top bio-exorcist, but Burton rightfully understands that he’s best taken in small doses, relegating him to the background of scenes until the conclusion. It’s the right call; instead of Betelgeuse becoming irritating, it’s just the right dosing of the problems that he can cause outside of his land of the dead.

With that said, Michael McDowell and Warren Skaaren’s script does leave a bit of a gap in Betelgeuse’s motivations. It’s not exactly clear what he wants to actually do in the mortal world. Is it to simply cause mischief, to alleviate himself of the eternal boredom of the land of the dead? That defining character element doesn’t come out enough, leaving the viewer wondering exactly what the dire consequences could be if he actually marries Lydia.

Still, the film handles a whole lot of other plot in the meantime. The Deetz family is also well-crafted, a well-to-do family who are, like Betelgeuse, bored of their current situation and hope to transplant themselves into small-town life despite Delia’s (Catherine O’Hara) obvious dismissal of it. The Deetzes help to juxtapose the differences between the Maitlands and Betelgeuse himself: they were happy with their life before it was suddenly uprooted, whereas the Deetzes and Betelgeuse are struggling to find something else. In the end, their overall relationship results in a happy symbiosis for all of them (except the Geuse of course).

Beetlejuice is a highly entertaining film filled with laughs, great characters, and actors who know how to portray them to their fullest extent. While the overall motivation for Betelgeuse might be missing, it’s not hard to see why Beetlejuice has continued to prosper as a lauded cult film; it has all the elements of an entertaining movie, with Burton’s creativity on full display as the characters maneuver through the land of the dead.

CHECK OUT
Full uncompressed screenshots from this 4K UHD Blu-ray.

Warner Bros. has released Beetlejuice in a number of different Blu-ray collections, but for the most part the transfer has not differed from their main 2008 version, which presented the film in an incorrect 1.78:1 aspect ratio. For the film’s 32 anniversary, Warner Bros. have improved on prior releases with a new 4K UHD option of the film with HDR10, and the results are striking to say the least.

Video quality has improved on every level, starting with the correct 1.85:1 aspect ratio. Extra detail pops within every scene, so much so that even seasoned Beetlejuice viewers will probably notice things in backgrounds that they never have before on previous releases. Things like sign writing, wallpaper design, and other smaller elements in backdrops are now on full display with the UHD offering, which brings out the best in Beetlejuice‘s sets. Skin tones are consistent and natural; outdoor lighting is handled well; and overall detail is simply impressive. Grain scale is mild but, unlike Warner’s The Goonies 4K UHD, still evident without any noticeable digital reduction.

Also impressive is the HDR10 offering, which brings out all of the nice vibrant colors inherent in the film’s design. Green, blue, and red lighting hues are all portrayed to full effect (see Betelgeuse’s visit to the strip club; the land of the dead); even minor color elements like the Maitlands’ yellow car pop. While casual viewers may not notice a huge difference in video quality, the color contrast from the HDR10 should be very apparent. And if not, Warner has also included a Blu-ray disc featuring the 2008 Blu-ray transfer for you to compare for yourself.

This Blu-ray features a Dolby Atmos/TrueHD 7.1 audio track for its sole English audio option. I do not have the ability to take advantage of the 7.1 or Atmos technology, but downmixing to 5.1 still sounded quite good with a strong, clear dialogue mix and some good use of the satellite speakers. However, it’s clear even from 5.1 that Beetlejuice really doesn’t need the dynamics of multiple speakers; it’s mostly front-loaded. Interestingly, Warner Bros. does not include an English 2.0 Stereo track, though it does include a number of other Dolby 2.0 language options and their corresponding subtitles.

Unfortunately, extras are extremely limited and are only included on the Blu-ray disc, which are the same options that viewers got on the 2008 release. There are three cartoon shorts, an isolated audio score, and an SD trailer. That’s it.

Despite some scarce extras, this 4K UHD release of Beetlejuice is the best that we’ve ever gotten for the film and it truly is a remarkable viewing experience thanks to additional detail and HDR10 doing some heavy lifting. Recommended. 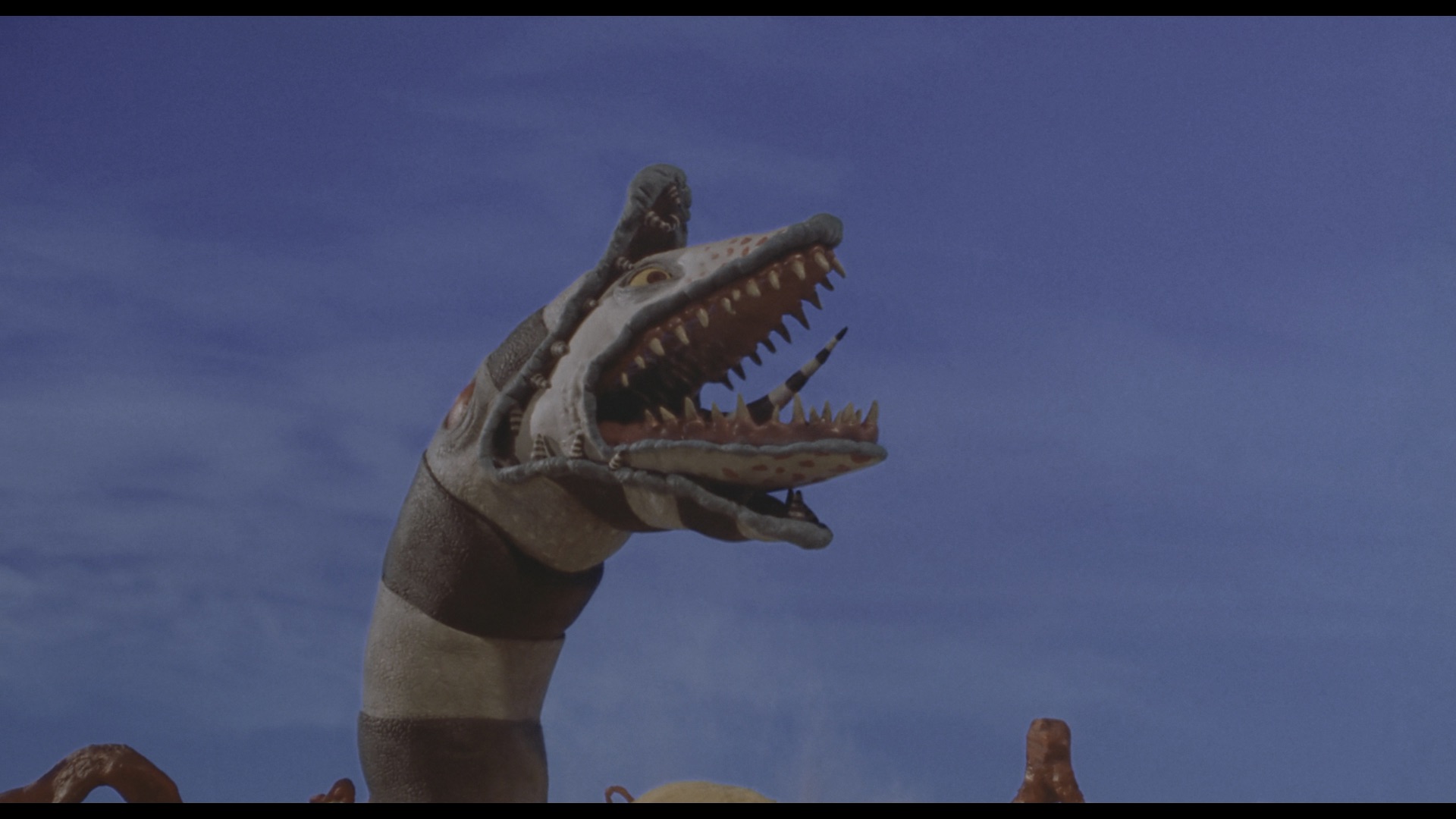 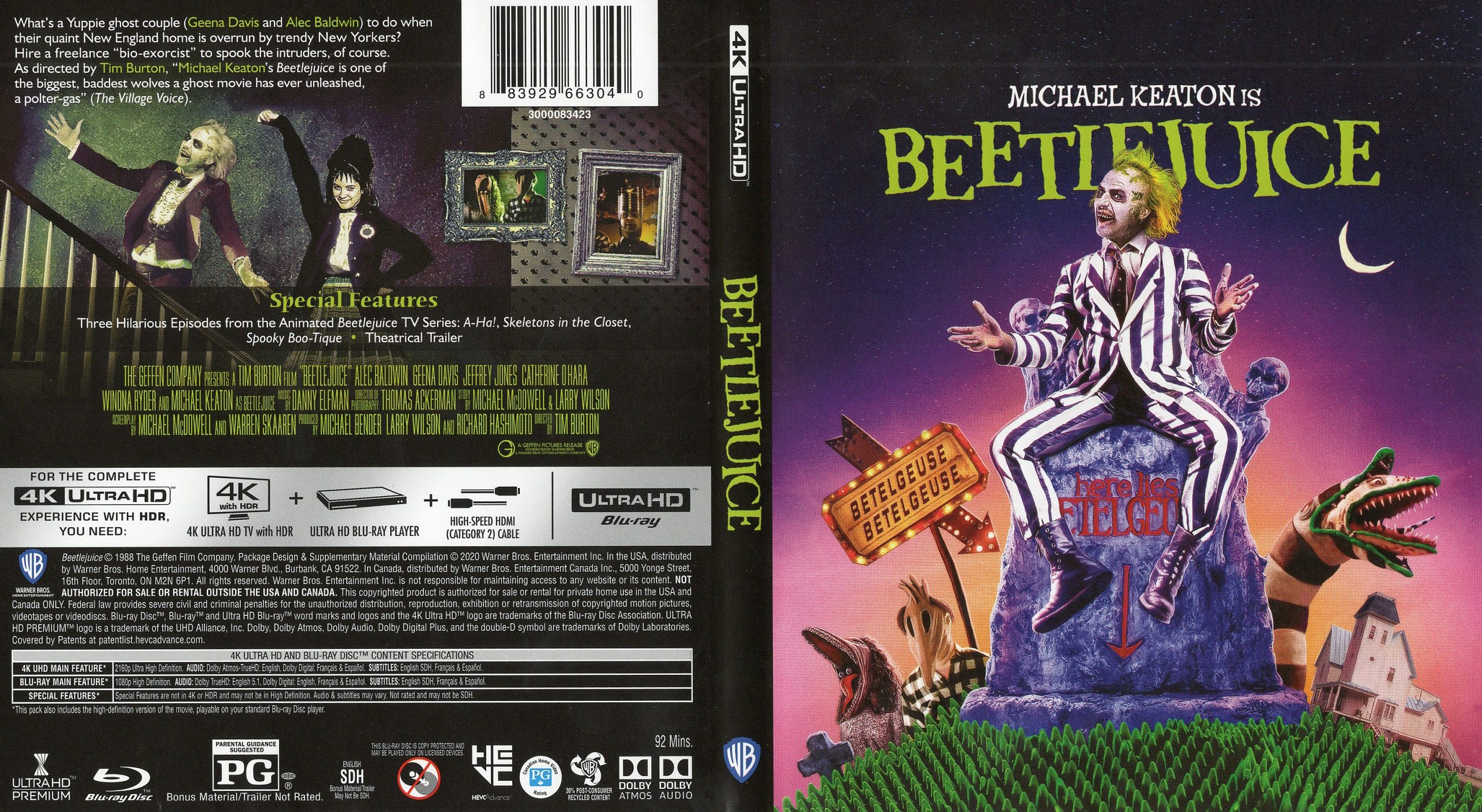 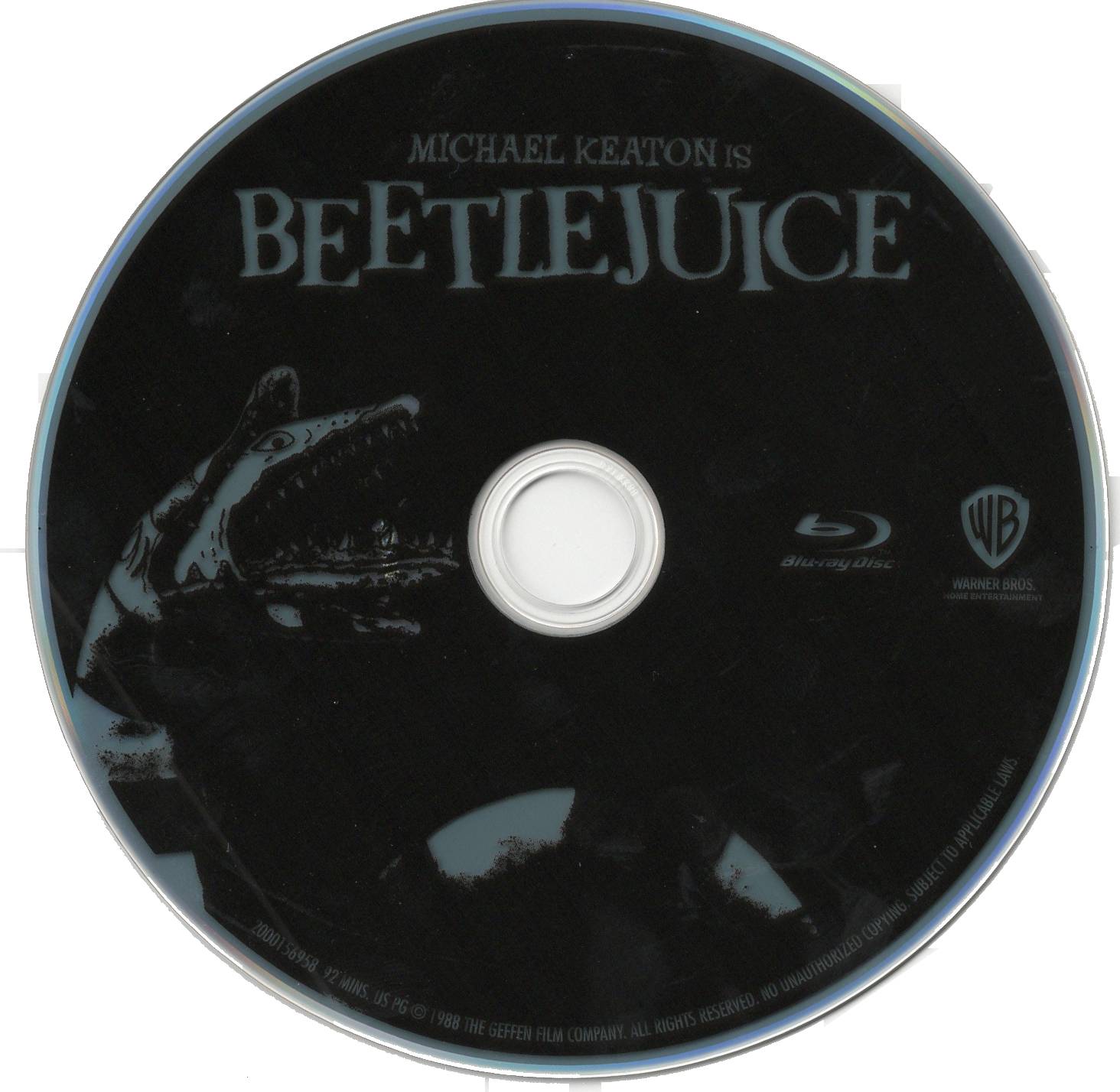 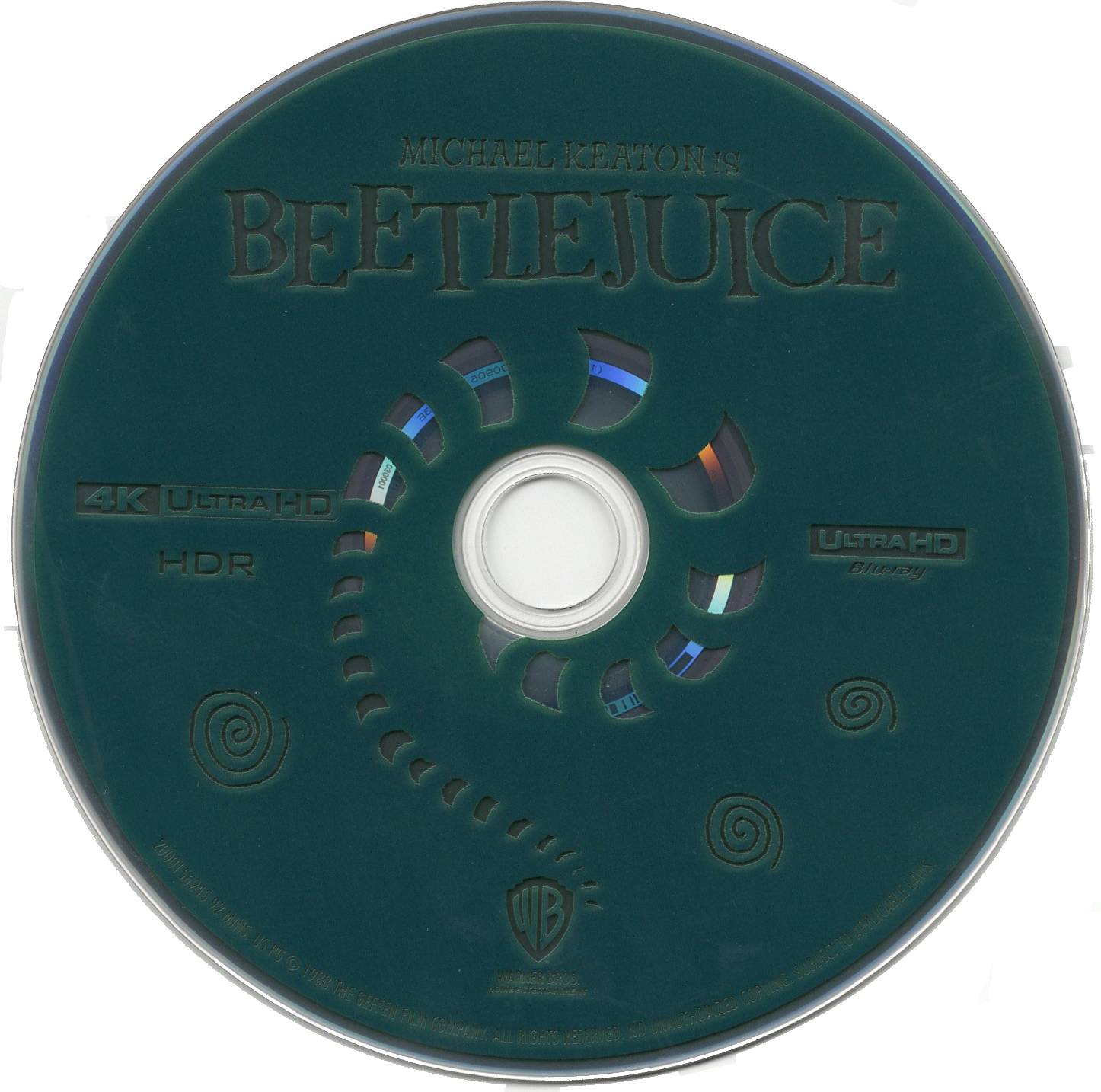