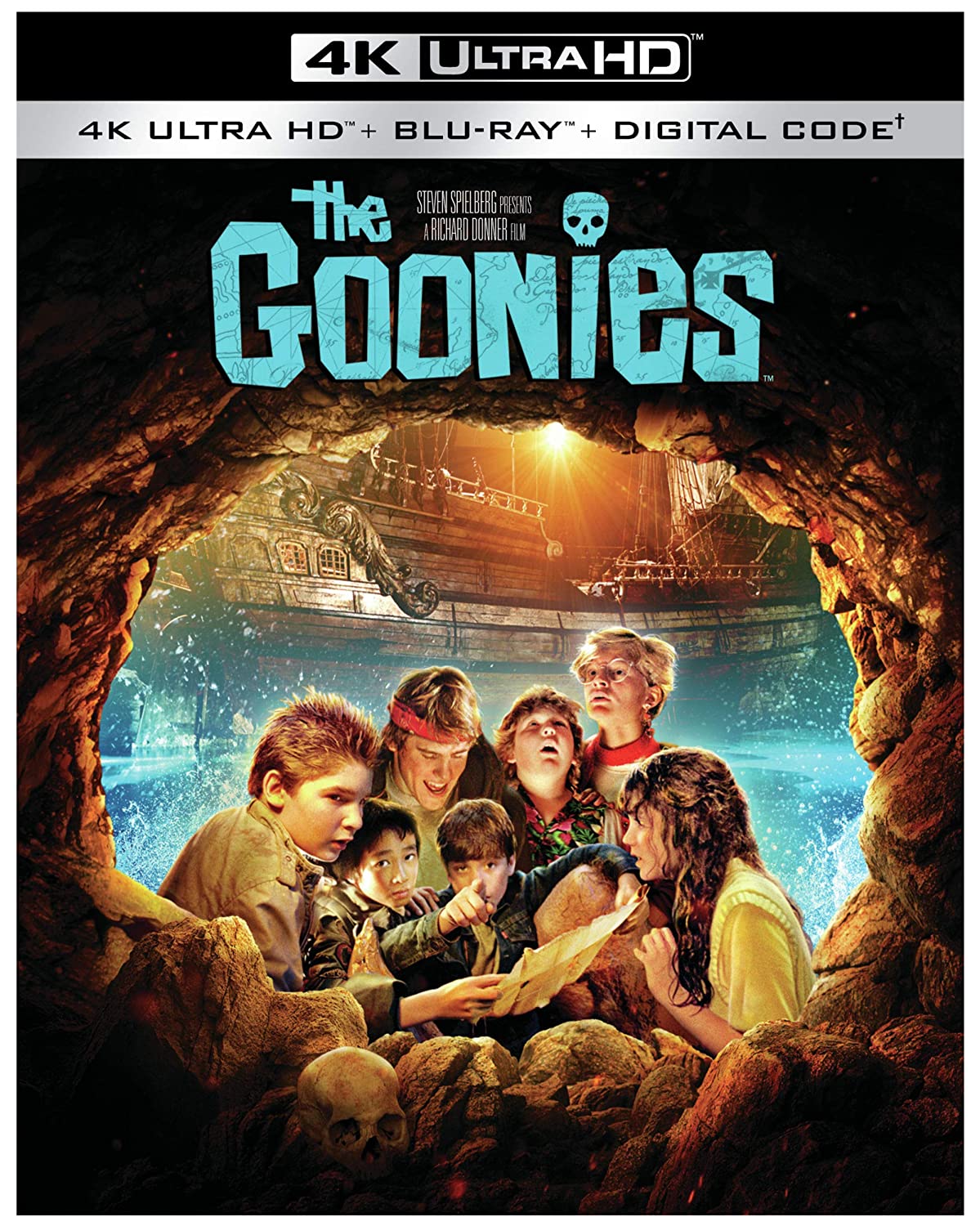 1985’s The Goonies has, over the years, become something of a cult classic for kids and adults alike. Its lasting power seems to come from the nostalgia factor of kids who grew up watching it, became adults who still found the magic in its adventure story, and subsequently passed that onto their kids for a new generation of fans, who then repeated again (yes, that means we’re all getting very old). Suffice to say that a general “review” of the film isn’t going to do much to sway those die-hard fans from changing their opinions and vice versa; however, it is still relevant to critique the movie on its own merits devoid of nostalgia.

The magic of Richard Donner’s film comes from its cast, which includes a number of young boys that would later go on to be even bigger stars like Sean Astin, Josh Brolin, and Corey Feldman, as well as the women who accidentally get involved in their adventure scheme (Martha Plimpton, Kerri Green). Christopher Columbus’ script sets the raucous nature of the film in motion with quick, witty dialogue, but it’s really the actors pulling off those lines that gives The Goonies its energy and youthful vigor. Fast-paced sequences are made even more chaotic by the boys’ constant chatter, with attentions paid to each individual’s unique characteristics despite the large cast.

All of this combines with Columbus’ large-scale adventure story as the boys and girls head out to investigate a potential treasure location after finding an old map in their attic. The idea is basically a young child’s fantasy: quickly The Goonies are teleported from their usual boring days into a sprawling quest for riches to help save their community. The Goonies has an imaginative set design, a claustrophobic Indiana Jones-esque underground journey, and constant haphazards along the way that make the film both fun and, at times, a little scary for its younger audiences. There’s no lull or break in the action, and Donner’s pacing is frenetic despite the film’s rather long 110-minute running time.

Most of the film is well-written, funny, and concise, but it does suffer from the overabundance of character and a lack of villains until the final stretch of the movie. Its treatment of the female characters is problematic, mostly because they are designed to be damsels in need of saving instead of strong in their own right. And the film’s overarching impetus – that the Goon Docks will be demolished in just one day if someone doesn’t come up with cash quickly – is only sketched out without too much development.

But even with all of that, The Goonies is a wildly entertaining ride. Its imaginative nature and thrilling pace will leave younger viewers entranced, but even for adults, its magical properties should bring out the childlike side in all, with a healthy dose of real-world meaning in the rich vs. poor that its conflict sets up.

The Goonies has had a number of releases on Blu-ray in the past from Warner Bros. including a 30th Anniversary Blu-ray release in 2015. This 4K UHD release is the first time that the film gets the ultra high-definition treatment, though, and this new 35th anniversary celebration provides a 4K UHD disc as well as a Blu-ray that is effectively the same disc from the 25th Anniversary collection.

The 4K UHD picture quality makes some marked improvement from the 25th Anniversary transfer with more definition that remains consistent throughout the running time. Skin tones appear natural and the film gleans more detail out of its darker settings. The film is pretty devoid of grain, though, which seems to indicate a bit of DNR applied to alleviate some of the necessary texturing. The HDR 10 on display here does not dramatically improve the color elements of the film, since for the most part The Goonies is a relatively dim and dingy movie without much color contrast. However, certain elements, like Robert Davi’s red flannel jacket or Chunk’s floral shirt, do shine through quite well. Overall, I don’t think that this 4K UHD version of The Goonies is extremely impressive, but it should satisfy viewers looking for a minor upgrade to previous iterations of the film on home video. See our gallery for HDR-less screenshots from the 4K UHD as well as the Blu-ray version.

There are a ton of audio tracks for listeners to peruse, but many of them are alternative languages. For English tracks, The Goonies gives us a DTS-HD 5.1 MA track that is a remixed version that differs from the Blu-ray’s previous Dolby TrueHD 5.1; the result is a fairly bland surround track that suffers from some muddled mix of the dialogue and music, which can often impede the characters’ speech. An English 2.0 Stereo track is not included, which is unfortunate for purists. The alternate language tracks are all in either Dolby Digital 2.0 or Surround 2.0, depending on the language. English subtitles and various other language subtitles are also included.

Extra features are limited to the same offerings on the previous 25th Anniversary collection disc and no extras are on the 4K UHD disc. That second Blu-ray provides the film with the prior HD transfer, a commentary track, a different version of the film with cut-ins of the cast while recording the commentary track, a Making of The Goonies vintage featurette, deleted scenes, the full 12 minute Cyndi Lauper music video, and a theatrical trailer, all presented in SD quality. See the extra features list for all runtimes.

This 4K UHD version of The Goonies is certainly an upgrade from previous installments for those that can take advantage of the technology, but without many extra bells and whistles to encourage those who might be double- or triple-dipping. 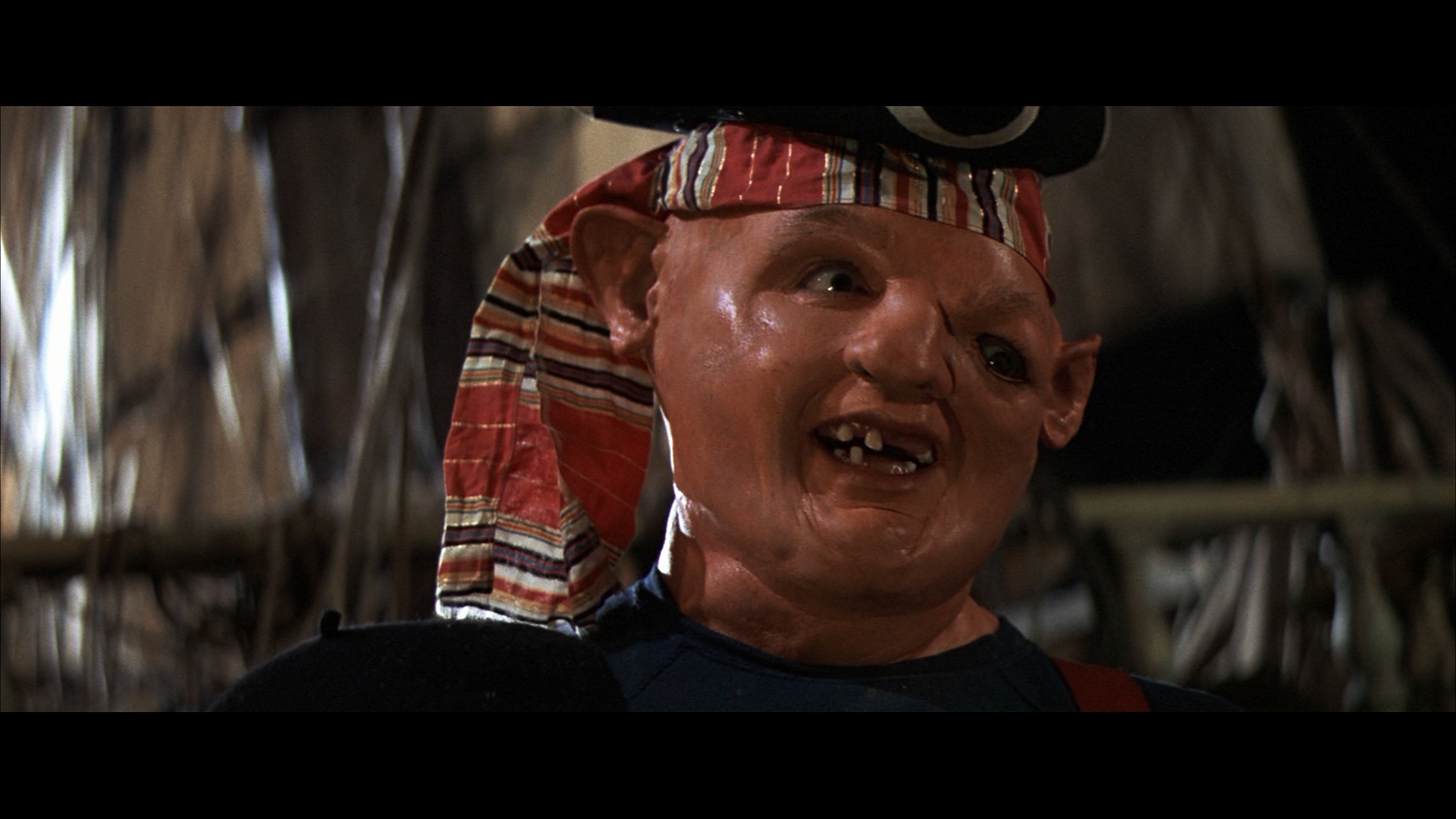 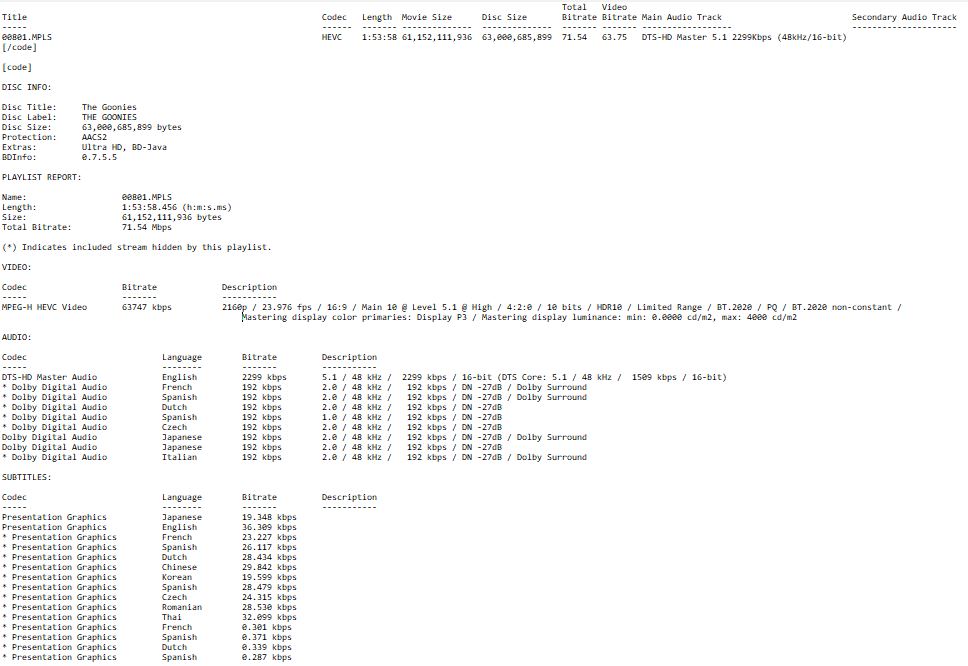 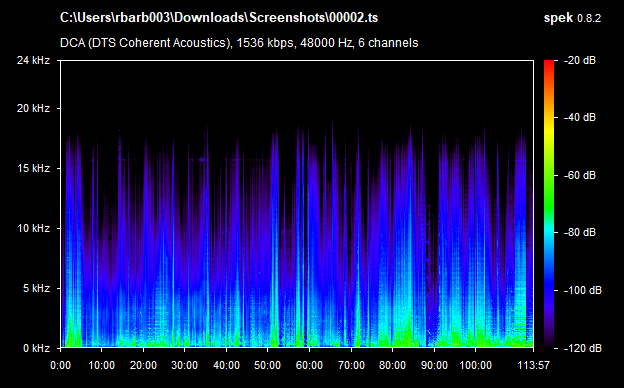 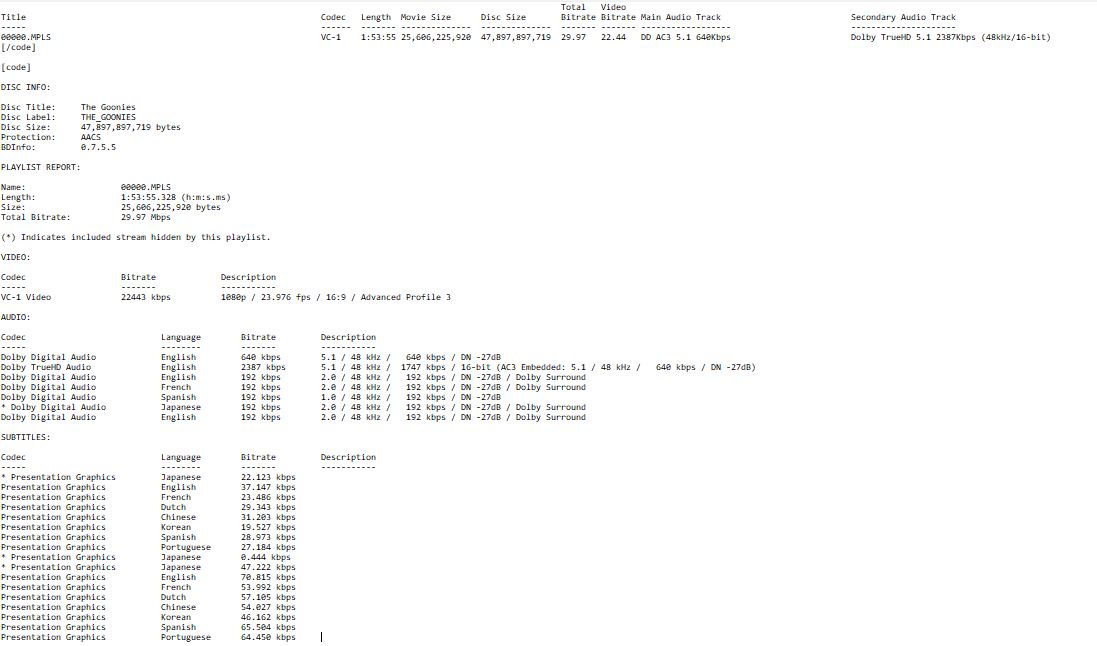 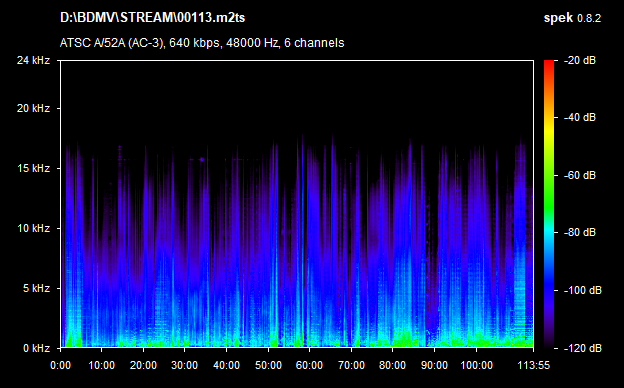 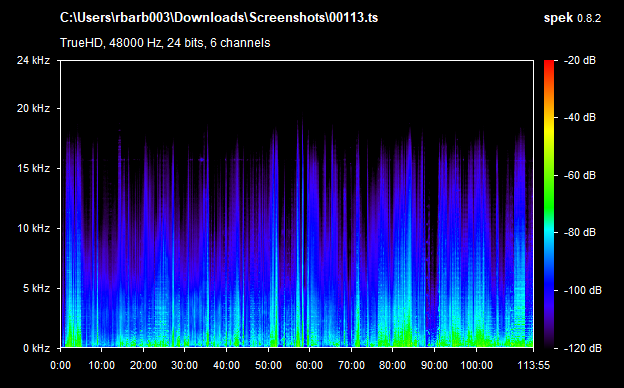 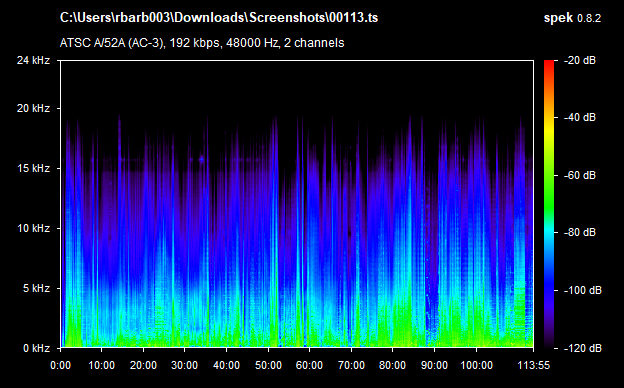 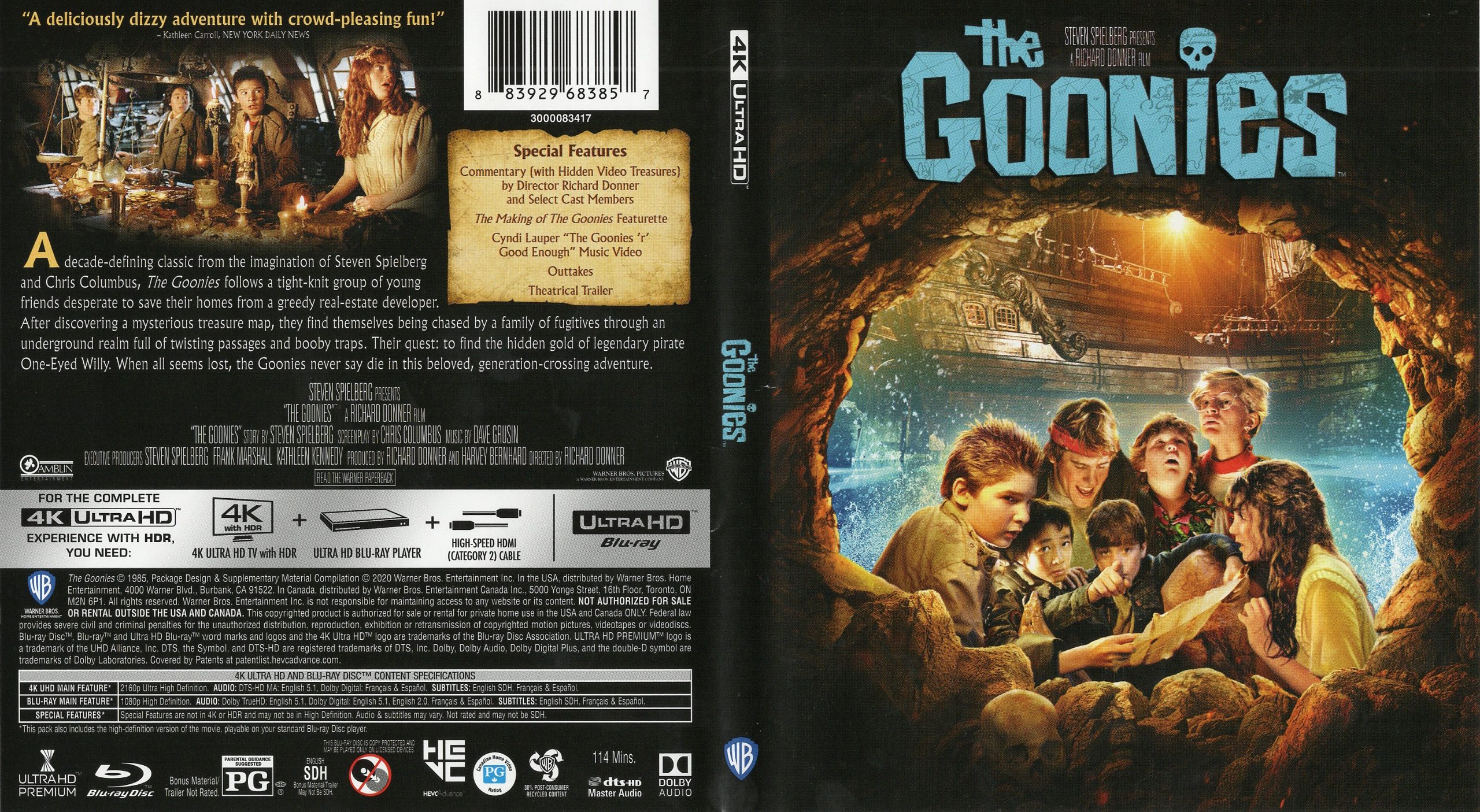 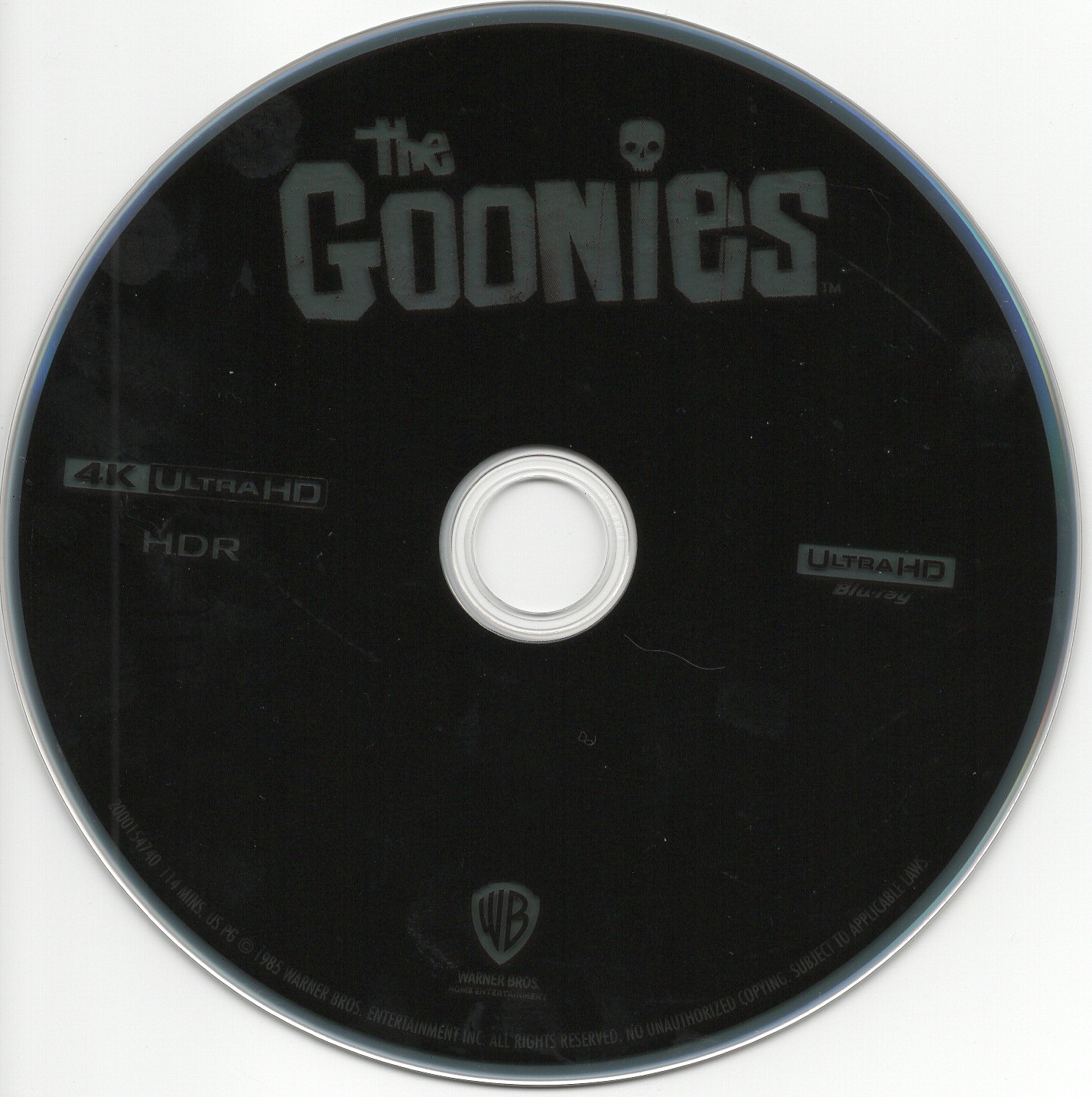 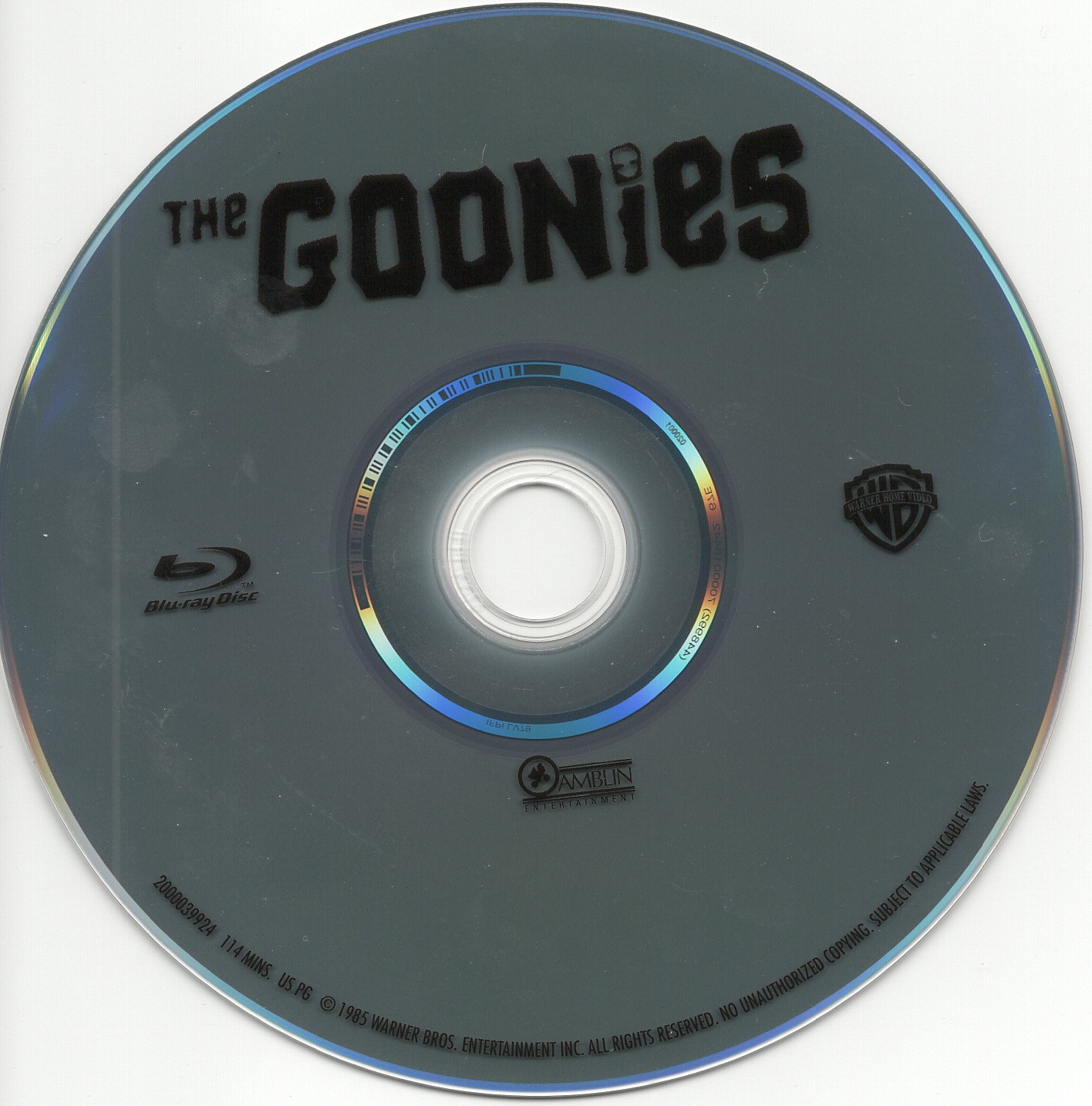 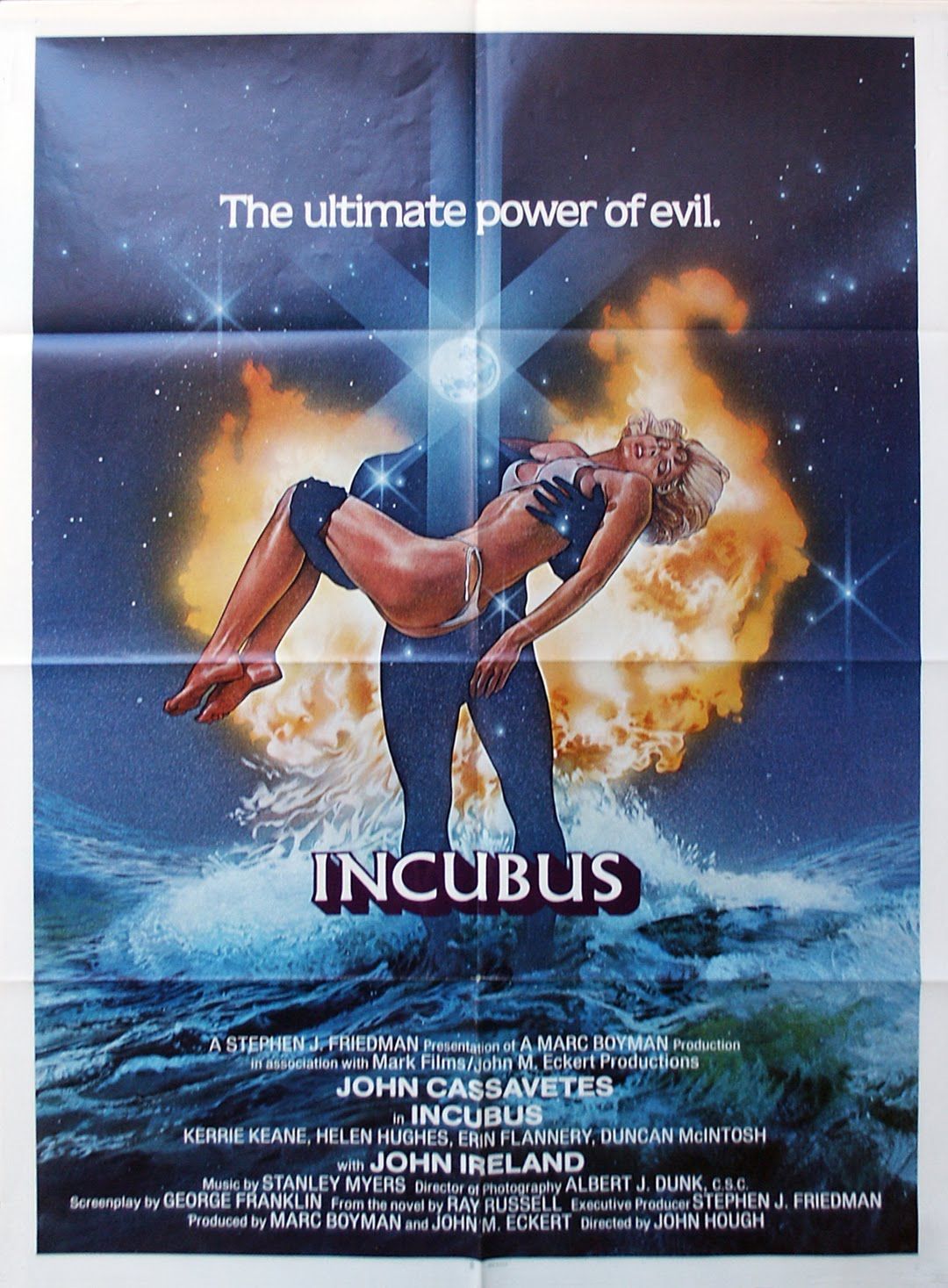