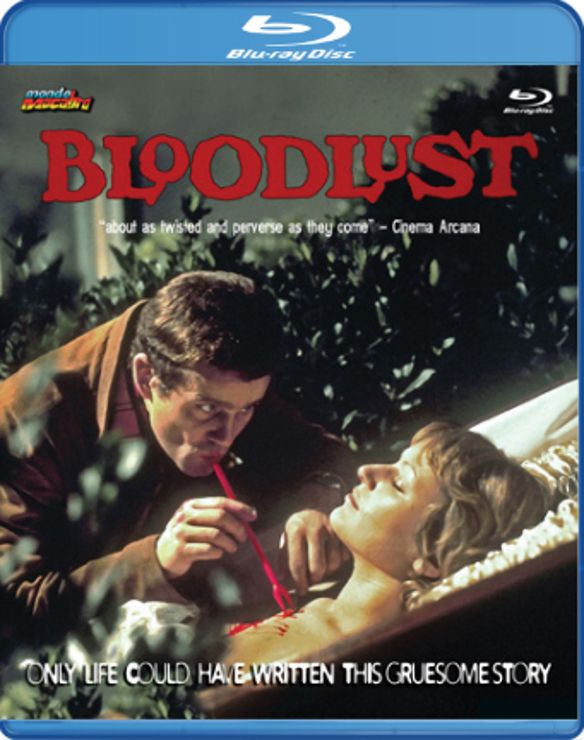 1977’s Bloodlust (alternatively Mosquito the Rapist, The Black Forest Vampire) comes to viewers as an odd, surrealistic representation of a real-life occurrence – the Vampire of Dusseldorf, otherwise known as serial killer Peter Kürten. Writer/director Marijan Vajda (also going by pseudonym Mario d’Alcala) uses Kürten’s criminal atrocities as inspiration, but the most compelling aspect of Bloodlust comes from Kürten’s traumatic upbringing. Vajda, interested in the intricacies of past abuses and the ways they affect a burgeoning sadist, explores the life of a deaf and dumb figure known only as the Man (Werner Pochath), an individual who experienced an abusive father, his sister’s sexual molestation, and constant bullying throughout his existence; and once the viewer is accustomed to the sad life of the Man, Vajda then exhibits his more psychopathic habits including breaking into the local funeral parlor in order to mutilate dead women and drink their blood.

One thing that particularly stands out about this 90-minute exploration of human psyche is Pochath’s acting, which is probably the film’s strongest aspect considering he gets no lines of dialogue throughout. Forced to develop his character with only facial expressions, grunts, and mouth-smacking, Pochath manages to craft a compelling portrayal regardless, especially since the first half of Bloodlust relies on the audience eliciting a sympathetic reaction. By the time Vajda reveals the Man’s sinister hobbies, the viewer already has a fair bit of compassion for him – and that makes the film all the more awkward as we’re forced to rectify the generally peaceful daytime Man with the atrocities he commits by night.

Vajda’s plot structure is fairly loose, and much of Bloodlust meanders with abstract character study. The Man’s potential love interest, played by Birgit Zamulo, dies in a particularly unexplained way – she plummets off a rooftop, apparently so absorbed in her ballet dancing that she doesn’t realize the danger. Either that, or we’re supposed to believe it was a suicide due to unrequited love. Whatever the case, Vajda never truly makes the motivation known, one aspect of Bloodlust that can be either frustrating or refreshing depending on the viewer.

Essentially the film is a series of progressively more violent mutilations, though the special effects work certainly doesn’t sell the realism of the events. It can be slower-paced, but at the same time, Vajda’s building of the Man tends to match with the increasing sadism of serial killers, first testing the waters before going to more extreme lengths. Bloodlust‘s surrealism is both a boon and a flaw, and it will depend on the audience’s patience; but this is a unique and bizarre film that demands at least one viewing, a psychological depiction of an individual that becomes more complex the more one thinks about it.

Mondo Macabro has released Bloodlust on Blu-ray for the first time with a new 2k scan of the original film negative. The transfer looks very good despite the obvious wear and tear of the negative including a few minor abrasions and scratches; however, a couple of dark scenes do tend to lose some detail. Still, the colors are very sharp – especially the vibrant blood – and otherwise everything is crisp and clear.

Two Dolby Digital 2.0 audio tracks are included here for both the English and German languages, and they sound good although neither dub is done well. Presumably the German is the preferable track due to some variations in the translations, but the English dub is okay too. English subtitles are included but they are only for the German audio; trying to watch them with the English track will give you a headache.

Two relatively new extras are included on this Blu-ray. The first is a 2009 interview with Marijan David Vajda, director Marijan Vajda’s son and assistant director on Bloodlust; this 11-minute interview features Vajda talking about some of his memories working on the film, explaining the inspiration for the film, and more, though about half of the featurette is just footage from the film. The other new interview is with Birgit Zamulo, who discusses what sounds like some poor memories of filming the movie including nearly suffocating, being perilously close to falling off the roof herself, and more, as well as her family’s poor reception of her previous sex films. This one’s about 20 minutes and in German with English subtitles. Then there’s also a trailer and Mondo Macabro promos. (Note: this release also came in a limited edition with red Blu-ray case and alternative artwork along with a booklet featuring an essay from Michael Gingold and multiple other promo materials.)

Ultimately Bloodlust will appeal to specific types of horror fans, those with an appreciation for odd cinema; with that said, this is absolutely the best way to own this rather obscure movie.

Bloodlust is a bizarre adaptation of a true serial killer story, and its gritty surrealism could be either a hit or a flaw with certain viewers. Mondo Macabro does a good job on this Blu-ray with great new 2k scan and a few new extra features.
Film
Blu-ray
Reader Rating0 Votes
4.3
Hosting screenshots is expensive. If you want to see more galleries, consider donating!