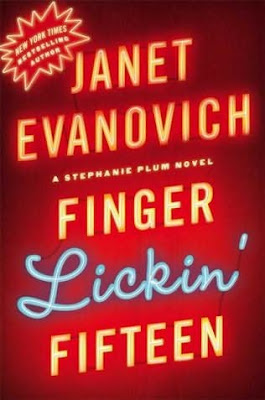 Sometimes it’s hard being a reviewer – I feel a constant nagging from myself to find something wrong with the item I’m reviewing. With Janet Evanovich’s book Finger Lickin’ Fifteen, there’s not much to critique, which is both a good and bad thing for me. It’s a good thing because I enjoyed reading the novel, loved its use of fantastical realism, and felt like it was just long enough and to the point. But it’s a bad thing because here I am, typing this review, with nothing to say.

Fifteen is the 15th book in the Stephanie Plum series, and while you don’t need to read the others to get the gist of this novel, it might help. I sometimes found myself lost in meeting the characters without the help of background knowledge, but Evanovich explains most of the confusion away. Plum works for a bail bond agency, tracking down those who haven’t shown up for their court date, but she is also occasionally called in to help a very close, handsome man named Ranger for his security company. In Fifteen, Ranger is having problems with his clients because someone keeps breaking into their houses and stealing their things, making his company look bad in the process. But Plum is also busy working on a few criminals of her own for the bail bond company, plus her friend Lula witnessed the murder of a famous chef and is now being targeted by two murderous (and crazy) men. Plum is dragged into each scenario, and, of course, must find a way to solve all of them.

The characters are zany but likable, the novel’s very fast-paced because of all of the action, and the total lack of luck that Plum has generates a lot of comedy. There’s not much to criticize with Evanovich’s work here; she has a sense of direction from the start of the novel and she pursues it throughout, throwing in more subplots to achieve that fantastical realism I was talking about before. Every event has some sort of surrealism to it; Lula fires guns off in public areas without anyone caring, three cars associated with Plum are totaled, and people act as if their id, ego, and superego are not in check. But this is a good thing for Evanovich’s novel; instead of seeming out of place, it fits Plum’s personality and her wacky lifestyle.

The conclusion is a bit too wrapped up, presented with a nice glittery bow and sparkles, and summed up so easily that it feels as though Plum wasn’t needed at all to solve the case. But I guess that mingles with the other bits of surrealism; things are crazy and unexpected, so the ending should be similarly so. I still was a bit disappointed with how everything was boxed up so nicely, a closure that didn’t feel earned. Otherwise, though, Evanovich gives the reader a quick, easy, and pleasurable read that’s easy to pick up without much baggage left after the reader has finished. Case(s) closed.

Like I said, not much to say except, “I liked it, good job Evanovich.”