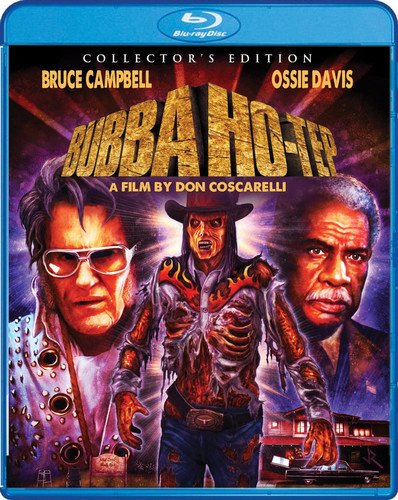 Verdict
Bubba Ho-Tep is a fairly good film from Don Coscarelli that could benefit from some directorial edits due to pacing. Otherwise, Bruce Campbell puts in a great performance as Elvis and the themes about ageing hit home. Scream Factory's Blu-Ray release includes enough new and old special features to warrant picking this collection up despite no new transfer.
Film
Special Features/Packaging/Quality
Reader Rating0 Votes
The Good
Solid themes about ageing, metaphor about death
Great performance from Bruce Campbell
Good addition of new and old special features
The Bad
Slow pacing drags down the film
No new film transfer
4.1
Very Good
Buy
Amazon

Bubba Ho-Tep is a horror comedy, but Don Coscarelli’s script and direction certainly don’t emphasize either sub-genre of film. The comedy is minimal and dry, with much of it relying on star Bruce Campbell’s delivery and the viewer’s appreciation for geriatric antics. The horror, on the other hand, is fleeting – introduced in the film’s middle portion, the Bubba Ho-Tep mummy monster is basically a personification of Death rather than a slasher-style horror villain. And yet Bubba Ho-Tep has managed to become a cult classic in its own right, perhaps because of its cast and crew – Campbell first and foremost, but also Coscarelli’s standing as Phantasm creator – or maybe because of its careful exploration of death, dying, and aging as the world passes one by. It is the latter that ultimately gives Bubba Ho-Tep its charm.

Campbell does some good work, and it’s important to give him credit for that. Thanks to some excellent make-up effects from KNB and his own personal touch on Elvis Presley, it’s not difficult to believe that the film’s main character Sebastian Haff is at least a very good Elvis impersonator, if not the real thing. Campbell’s drawl and the way he channels the movements and actions of the dead celebrity fuel Bubba Ho-Tep‘s funnier moments, but more importantly they add weight to the film’s more depressive, insightful moments.

As Coscarelli’s script meanders through its admittedly creative subject matter, it hones in on its nursing home setting. Obviously, it derives some of its humor from the elderly, lovingly laughing at dementia and senility while also promoting a downbeat tone. Coscarelli recognizes that there are jokes to be made but not at the expense of the elderly; instead, he uses Elvis as a way to comment on ageing, the audience’s filter for a narrative about death. The viewer can watch Bubba Ho-Tep in two ways: at face value, accepting that Sebastian is actually Elvis fighting an evil mummy; or as a metaphor, with Haff/Elvis accepting his mortality and dying on his own terms.

Either way, Coscarelli’s script gleans a lot from a fairly ridiculous premise. Even still, the audience is left to wonder whether Haff is truly Elvis. If he is, then he is redeemed in his final moments; if he’s not, then Haff’s final days were spent regretting a past he never lived. Either way, Coscarelli’s humor is saddled with drama as well, with the film’s constant melodrama attempting to ward off the sad thought of death.

With that said, Bubba Ho-Tep is poorly paced with an inexcusably slow introduction to the main conceit. Coscarelli works in a lot of themes, but it’s at the expense of entertainment value; Campbell can only do so much before the excessive dialogue begins to wear on the viewer. It’s especially apparent when Bubba Ho-Tep (Bob Ivy) is finally introduced – he gets little characterization or development, instead a simple hasty explanation for his appearance that involves a joke about Cleopatra’s sexuality and a running gag about sucking souls out of butts.

One can’t help but feel Bubba Ho-Tep‘s pacing is the main detractor for this film, downgrading it from a great movie to a moderately good one. It’s still worth a viewing because of Campbell’s Elvis and Coscarelli’s interesting themes, but most casual viewers will find Bubba Ho-Tep overly long even at just 93 minutes. For those that can stomach the pacing, though, the film presents some compelling themes weighted down by a poorly-developed villain.

Scream Factory’s Collector’s Edition Blu-Ray of Bubba Ho-Tep gets a nice package including new cover artwork along with the original on the reverse side and a slipcover. It’s also got a good-looking image with 1.85:1 aspect ratio, with a healthy grain presence noticeable in some darker scenes. The film gets two audio tracks – a 5.1 surround which is probably one most viewers will opt for which sounds excellent and a 2.0 track which also sounds rather good without offering the kind of surround effects one will get with the 5.1.

While this release doesn’t feature a new transfer, it does include a number of new features including an audio commentary track with author Joe R. Lansdale (short story writer on which this film was based), a new interview with Don Coscarelli, an interview with Bruce Campbell, and questions with effects artist Robert Kurtzman.

Along with these new extras, Scream Factory includes a lot of previously available bonus content as well – two audio commentaries, making-of featurettes, a reading from Joe R. Lansdale, music video, soundtrack info, and a look at the costumes. All told, this is a great collection of extra footage, and fans of the film will enjoy both the new and old offerings on this disc.

Listen to our podcast episode: