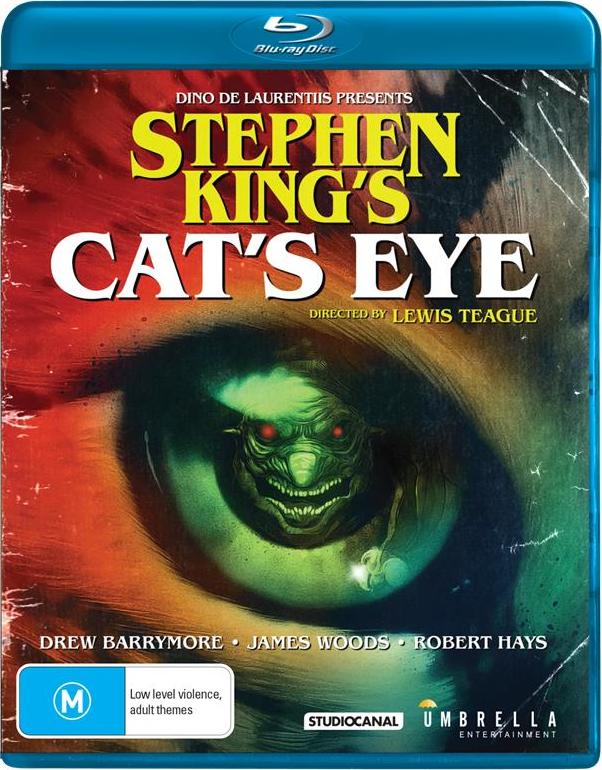 Cat’s Eye is a 1985 anthology film from director Lewis Teague (also of Cujo) with a screenplay written by Stephen King. Two of the stories have been pulled from King’s short story anthology Night Shift, but the final tale was created for the film itself, and it aids in the odd framing narrative that helps transition between the stories. As anthology films go, Cat’s Eye is pretty unique – its central conceit doesn’t revolve around disconnected storylines but instead crafts its main protagonist into a cat of all things, and a pretty cool one at that. At Cultsploitation, we’re pretty good friends and we think that dialogues about film are some of the best ways to review. For this Cult Double-Shot, we take a look at Cat’s Eye‘s nine lives (and three stories).

Having never seen Cat’s Eye, I didn’t really know what to expect. I didn’t even realize it was an anthology film until the end of “Quitters, Inc.” But I felt like it was a good thing because that story makes it pretty clear that it would have a difficult time sustaining itself for too long. I thought it was actually the perfect length.

I’ve seen Cat’s Eye a few times over the years and I still get it confused with the Tales from the Darkside movie, involving the killer cat. Thankfully the cat in this flick is both friendly and awesome.

Cat’s Eye started off on the right foot with a fun, quirky story starring James Woods. “Quitters, Inc.” is based on the short story of the same named featured in Night Shift, Stephen King’s first anthology book. What makes “Quitters, Inc.” so same enjoyable is the humour mixed with the dark undertone of the story.

I like the humor in this one and I think James Woods does a good job in this role as the straight man who is seemingly unaffected by this odd smoker’s quit routine, he’s even pretty much unfazed by their threats until they actually start to occur. I think one of the best moments is the scene where he finds the man in rain boots in his closet; it’s both hilarious and chilling.

I do love the closet scene, but the part that stands out to me is the ending and the implications it presents with James Woods’ character never being truly free. It’s a dark humourous ending, but also disturbing.

Yes, the ending is awesome. It’s because that ending dinner scene is foreshadowed by Woods’ almost jolly attitude towards Quitters, Inc. after he’s cured of his addiction. It’s a great metaphor for the addictive mind, too.

So the next story in Cat’s Eye is based on the short story “The Ledge,” originally appearing first in the July 1976 issue of Penthouse, which makes me think no one actually read it, and eventually ending up in the Night Shift collection. In the film adaption, we see Airplane actor Robert Hays playing tennis instructor Johnny Norris, who gets a bit too friendly with a rich man’s wife. The rich man/crime boss, Cressner (Kenneth McMillan) captures Johnny and wages a bet with him. He bets that Johnny can’t walk around the very tall building on a very small ledge. Johnny isn’t given much other choice expect to accept the bet and try his best.

“The Ledge” tends to go a bit darker compared to “Quitter’s, Inc,” with not much humour, save for some pigeon action later on in the story. This actually works rather nicely as it shifts the tone a bit, saving more laughs for the last story. Personally, I love the simple structure of the story and I really enjoyed the twisted, dark ending.

I liked that “The Ledge” requires a lot less setup than “Quitters, Inc.” It’s a lot more self-contained in this one moment, and that gives the short a chance to grease some audience palms as Johnny walks around the ledge. The greenscreen shots aren’t that great, but I think those issues are tempered by some good direction and pacing. Cressner’s a pretty ridiculous character but it works in a sort of EC Comics sense; he’s outrageous on purpose, and it makes his comeuppance even better.

I agree with you about “The Ledge.” A simple story that puts the viewers on the edge. However, I’m pretty sure those aren’t greenscreens, but just giant matte photos of a city backdrop.

And now we come to the main attraction of Cat’s Eye, the story that ties everything together – the cat’s presence, Drew Barrymore’s Princess Leia-esque holograms – into one cat vs. troll fight fest that rivals the classic Rikki-Tikki-Tavi mongoose v. snake battle. “The General” is a new story, and it’s one that finds the titular cat the General protecting Drew Barrymore’s character Amanda from a soul-sucking troll who has hidden himself away in the house walls.
This story, to me, is the weakest of the three due to some key issues. For one, the mom absolutely sucks. It’s also lacking some of the tongue-in-cheek humor that makes the other two storylines click. And it also feels like a direct shot at copying 1984’s Gremlins.

I agree that it is the weakest of the three, and that’s most likely due to it being an original story that was never featured anywhere else. It seems strange that they didn’t decide to put another adaptation of a short story into the film, although word is they were going to do Sometimes They Come Back, but that never came to be.
Nevertheless, even though I feel it’s the weakest, I still enjoy the heck out of the story, and that’s because of the troll and the amazing special effects put into the set pieces. The troll is hilarious, flipping the bird to the cat, running around and doing cartwheels and somersaults. The set pieces had to be proportionate to the troll, and the crew did an amazing job, and it’s so damn neat on screen.

The set pieces are my favorite part. I think they did a good job with them, and when they’re not directly proportionate it does add some lighthearted humor to the whole thing. The troll is a good object, and I do like that he’s both cute and mischievous.

I’m not sure that this piece does a great job of wrapping up the framing story, but I also just applaud Cat’s Eye for coming up with this weird theme of following a cat around to tell these strange stories.

That’s true, the last story doesn’t really tie it all together, but we do see that the cat gets to live with the girl, even if the Mom is a real B.