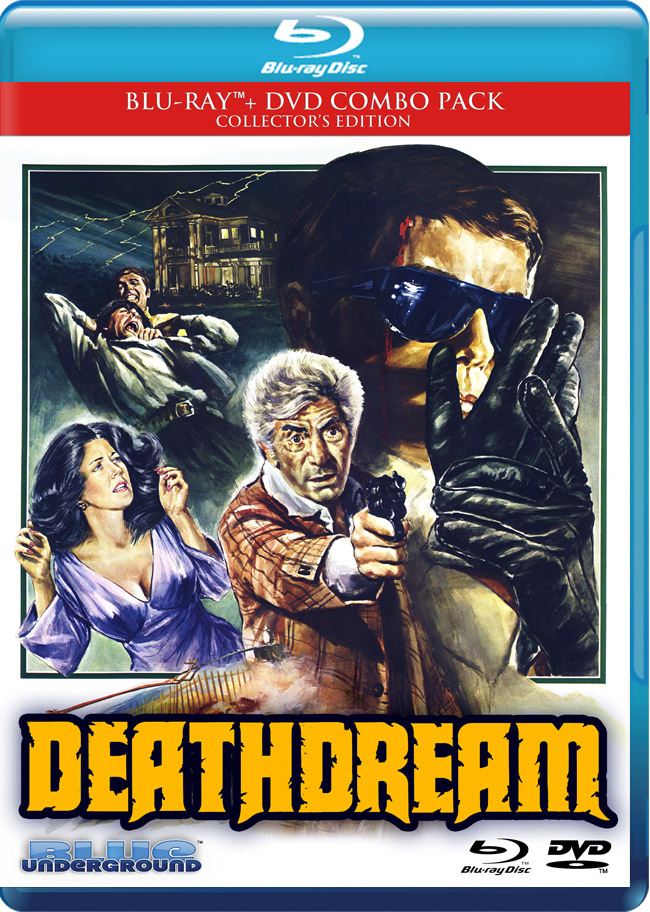 Andy’s dead, but that’s not going to stop him from coming home. His mother will be happy, his sister will be dumb, and his father will be suspicious. 88 minutes later you will be bored.

Director Bob Clark had two films come out in 1974. One was fantastic, and the other was Deathdream (aka Dead of Night, aka It Came From the Grave, aka King of the Grave, aka Whispers, aka The Night Andy Came Home, aka Night Walk, aka The Veteran). If you’re wondering, the fantastic one was Black Christmas.

The reason Deathdream isn’t fantastic is the fact that it is a rather dull film. The premise is simple enough. A soldier in Vietnam is shot and killed, but due to unexplained magic (the story is inspired by ‘The Monkey’s Paw’, but I didn’t see any damn monkey paw), he ends up arriving home, undead. To maintain his lustrous appearance, the undead soldier, Andy, needs to drain people’s blood. All of this is kept a secret from his family; sort of-Andy manages to kill the family dog in a fit of rage, while his father stands by mouth agasp. On the other hand, his mother is just happy to have him home and is just so damn in love with him, even if he is rotting and falling apart.

Now, we the audience already know that Andy is undead, but the characters don’t, which means we need to watch these people slowly play catchup and the result is so damn boring. Most of the time Andy rocks in his chair, his father gives him the stink love, and his mother just acts so damn happy that he is home.

The film runs 88 minutes and it isn’t until the final 10 minutes that we get some action flowing, but the situations are by far some of the silliest shown on film. The showdown at the drive-in is hilarious, with Andy’s sister screaming her head off, doing absolutely nothing to help her boyfriend. On the other hand, the final chase scene is pretty exciting, and the end was neat. However, tiny bits of neat does not a fun movie make.

If I want to sling some positive at Deathdream (aka.. kidding I won’t do that again), I would have to say that a young Tom Savini does a splendid job on the special effects of Andy, but sadly the kills are pretty tame. See, I can’t even give some positive without throwing in some negative.

Some violence and murders are happening in Deathdream, but for the most part, it’s a pretty bloodless affair. We see some after-the-fact kills and that’s pretty much it.

This is one film that could have used some boobies, but there is no supple flesh to be seen. Ugh, why can’t you at least give me some side boob dammit!!

No matter how bad I think the flick is, Blue Underground will still give you a freaking awesome Blu-ray. Deathdream is no different, and plenty of people will enjoy what Blue has done for the video transfer. It’s a bit on the rough side during a few shots, and the ending shot degraded for some reason, but for the most part, it’s solid. I am going to take a guess and say this is the best the film has ever looked.

The audio also fares nicely with a DTS-HD Mono track, providing a clear sound field with no apparent distortion. I don’t have much more to say about the audio, except maybe to say it was nice not having to crank the volume up just to hear the dialogue.

Let’s be honest here folks. I didn’t enjoy the movie, so I certainly wasn’t going to spend a heck of a lot of time on the features. I can say for a fact, that Blue Underground has supplied a healthy selection of special features to keep fans going for hours. There are five new interviews not featured in any other release, but all the other features, audio commentaries included, have been included on past releases.