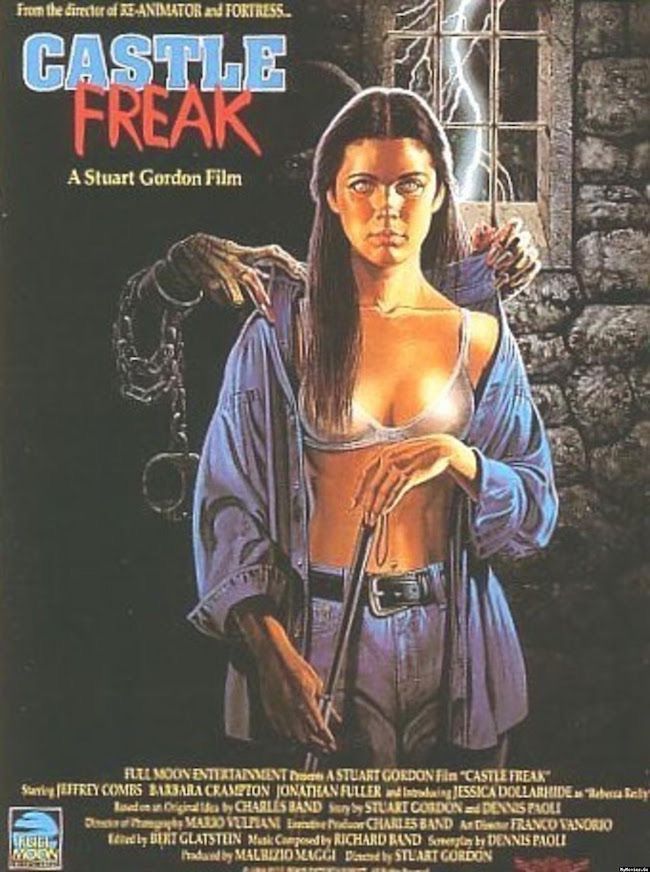 Jeffrey Combs plays an alcoholic with a broken family. Still reeling from the boozin-and-cruisin-related car wreck that killed his son and blinded his daughter, he finds himself in possession of his estranged aunt’s Gothic palace. Combs, his traumatized wife, and their now-only child straight up move to Italy to live in the castle as they get it ready for sale. Unfortunately for them—but lucky for us—the utterly insane, mutilated, and monstrous rightful heir to the castle and its grounds is still there, haunting the halls and eating the skin of the occasional cat. After witnessing Jeffrey Combs vigorously patronizing a sex worker in the basement, the “Freak” becomes inflamed with bloodlust. And also regular lust.

Being that Castle Freak is another Lovecraft adaptation from iconic cult horror goofball Stuart Gordon you might think it’d have that same sorta wild, over-the-top violence and gore that his earlier, better-known works had. But you’d be wrong. The acting might be campy (or even out-right bad at times) but the subject matter really isn’t. The writing isn’t. The story and violence are gritty, grim and played surprisingly straight.

That’s not to say it’s a cinematic masterpiece or anything, don’t get it twisted – Castle Freak is a mess. It’s not a Yuzna-produced, gory, nightmare-from-another-dimension black comedy mess like Gordon’s earlier Lovecraft adaptations: From Beyond and Re-Animator represent a “Peak Gordon” style of mess that’s never been replicated – but it is still delightfully Gordonian.

And that ends up being both its saving grace and its Achilles’ heel: the cognitive dissonance of seeing a silly cult master get serious for a second. The director just can’t help himself sometimes, and the audience is right there eating it up.

See, on the one hand the writing is actually pretty good: a dramatic story of abuse, parenthood, trauma, and violence – framed by a tale of two brothers: one the accidental perpetrator of lethal, but unintentional, violence against his own children, and the other a victim of unspeakable torture at the hands of a cruel and hateful mother. When the two meet, it’s a battle for survival, for family, and for redemption.

On the other hand, the villain is a grunting, chittering doofus with a messed-up face and his dick all cut off who hobbles around murdering hookers and eating their tits. He literally hides under a white bedsheet for like three-quarters of the movie like a kid in their first ghost costume. The movie can’t seem to decide if the monster is tragic—after all, he’s but a victim of his evil mother—or if he’s, as the title suggests, just a Freak who lives in a castle.

In the end, Castle Freak is as great as the sum of its parts but not more—Jeffrey Combs and Stuart Gordon are an awesome, campy team and the horror elements are fucking horrifying. It’s just… it can’t quite seem to make up its mind about what it wants to be. Is it a schlocky, midnight movie slaughterfest or a serious, contemplative, Gothic horror drama? It’s a bit of both and they don’t always gel perfectly.

The violence is really the high point here, so I don’t wanna spoil the details, but a cop’s face gets bitten off. It’s fuckin’ awesome. There’s also a brutal, very hard to watch rape scene that starts off grisly, and devolves quickly into X-rated, NSFW dungeon cannibalism. Once things get started in Castle Freak, the mutilation party don’t stop until the final, heroic showdown – which, obviously is in the middle of a dramatic rainstorm.

As far as actual sex, there’s some—only one sex scene, albeit an explicit and realisitc one—but the sexuality is pervasive and overt. The title character spends a lot of time sexually menacing the women in the castle. There’s a lot of not-strictly-gratuitous, plot related near nudity (all female, of course) but where Castle Freak‘s twisted sexuality becomes really obvious is in the violence.