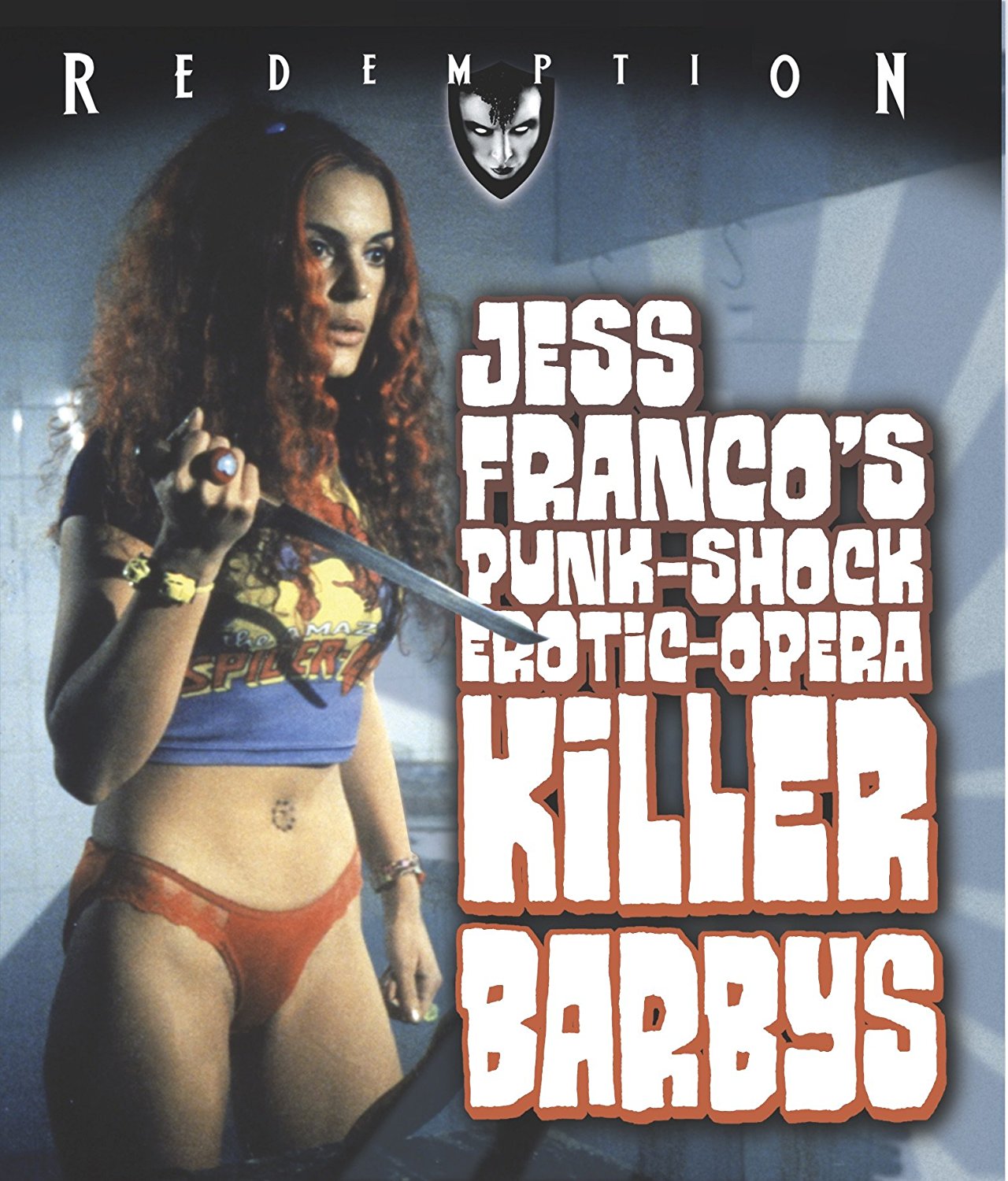 The Killer Barbys break down on the road to a new gig and happen upon a creepy old castle populated by a guy trying to revive his ailing bride – a Dracula-esque Countess who requires the blood of the band for sustenance. So ensues a 90 minute film about people listening to their own music while having sex, staying in the castle despite realizing its oddness, and eventually becoming food for the Countess.

Jess Franco’s 1996 film Killer Barbys is certainly one of those films that forces the viewer to question the ultimate goal of making it. On the surface, it sounds like a classic Franco film – punk rock kids go to a gloomy old castle, encounter a sexy vampire, and then die in bloody ways. But once the movie expands on its obviously simple premise, Killer Barbys begins to look more like a 90 minute advertisement for the real punk rock band The Killer Barbies, complete with the lead singer Silvia Superstar in the lead role Flavia during the film. Franco splices Killer Barbies songs in with random horror and sex scenes, and often that’s the basic storyline as the audience follows the bandmates during their stay at the Countess’ (Mariangela Giordano) castle.

There’s not a lot of substance to this Franco story, either, so the majority of the film is spent lingering on the scantily-clad female bandmates and, for long stretches, documenting an exhaustive sexual encounter between lovers that seemingly lasts a day and a night. Franco doesn’t do any character work here, and he very briefly touches on the vampirism in the castle – the Countess needs blood every few months or else she turns into a dusty mouldering corpse, and so Arkan (Aldo Sambrell) and Baltasar (Santiago Segura) lure people in for her feasting pleasure. It’s basically a lite version of Franco’s earlier vampire works, and not only are there very few scenes involving the Countess actually attacking her victims, there’s also no imperative for the kids to stick around this gaudy mansion.

Killer Barbys was not a high point in Franco’s career, and ultimately it reads either like a cash grab or, more likely, an advertisement agreed upon by the Killer Barbies and the director. Though it did lead to a semi-sequel with Killer Barbys vs. Dracula in 2002, the film has languished as just another weird directorial decision from the prolific Franco.

The film is surprisingly light on violence considering the subject matter. There are a couple of fun slaughterhouse scenes and a chase sequence that ends with a beheading, but other than that the kills are few and far between in the film and out of five band members, two of them make it out alive. (Actually, by the film’s narrative at the conclusion, they’ve all survived to perform a Killer Barbies show.)

As one would expect from a Franco film, there’s a lot of sex and nudity in the film, but it’s so overdone that it actually becomes disinteresting. The sex scenes are overly long and often show the same act over and over again. However, there’s full-frontal nudity from both a band mate and Mariangela Giordano, and even a penis shot in a bath.

Kino Lorber and Redemption Films have released Killer Barbys on Blu-Ray with a new 4k scan of the original film elements. Those film elements must have been in bad condition because the picture quality here varies inconsistently. At times, the image can look quite good with even skin tones, good color contrast, and nice picture detail. Other scenes feature a heavy grain presence that gives the picture a filter, poor detail in darker shots, and a lot of damage and debris including a line early on through the center of the picture. There’s also quite a bit of wobble at times. Obviously I can’t comment on the film’s quality prior to this release (although it did get a DVD release from Shriek Show), and presumably the 4k scan is the best they could do with the provided elements, but the picture is unfortunately not spectacular.

The film surprisingly comes with three different audio tracks, although it does make sense given the areas of production. The first and recommended track is the original Spanish audio with English subtitles, which sounds great in stereo especially with the variety of grunge and punk rock songs on the soundtrack. The English track is the second-best of the three, with a poor dub that still retains the dynamism of the soundtrack. The French dub is the worst, with a very condensed sound and often booming dialogue. As stated before, the Spanish track is recommended and generally sounds good.

No real extra features are included on this disc besides a nice menu layout structure and an audio commentary from film critic Troy Howarth, who does attempt to walk through the film with a scholastic integrity that’s surprising for this type of film. The commentary is probably the best way to watch the movie and a nice addition to this sparse release.

Overall, Redemption Films has done a fair job of putting Killer Barbys out on Blu-Ray, with a new 4k scan that updates the picture quality slightly and includes three different language tracks for collective purposes. While the lack of features is disappointing, it’s still a surprise that Killer Barbys is getting any kind of special release – let’s just hope there are a couple fans out there to buy it.