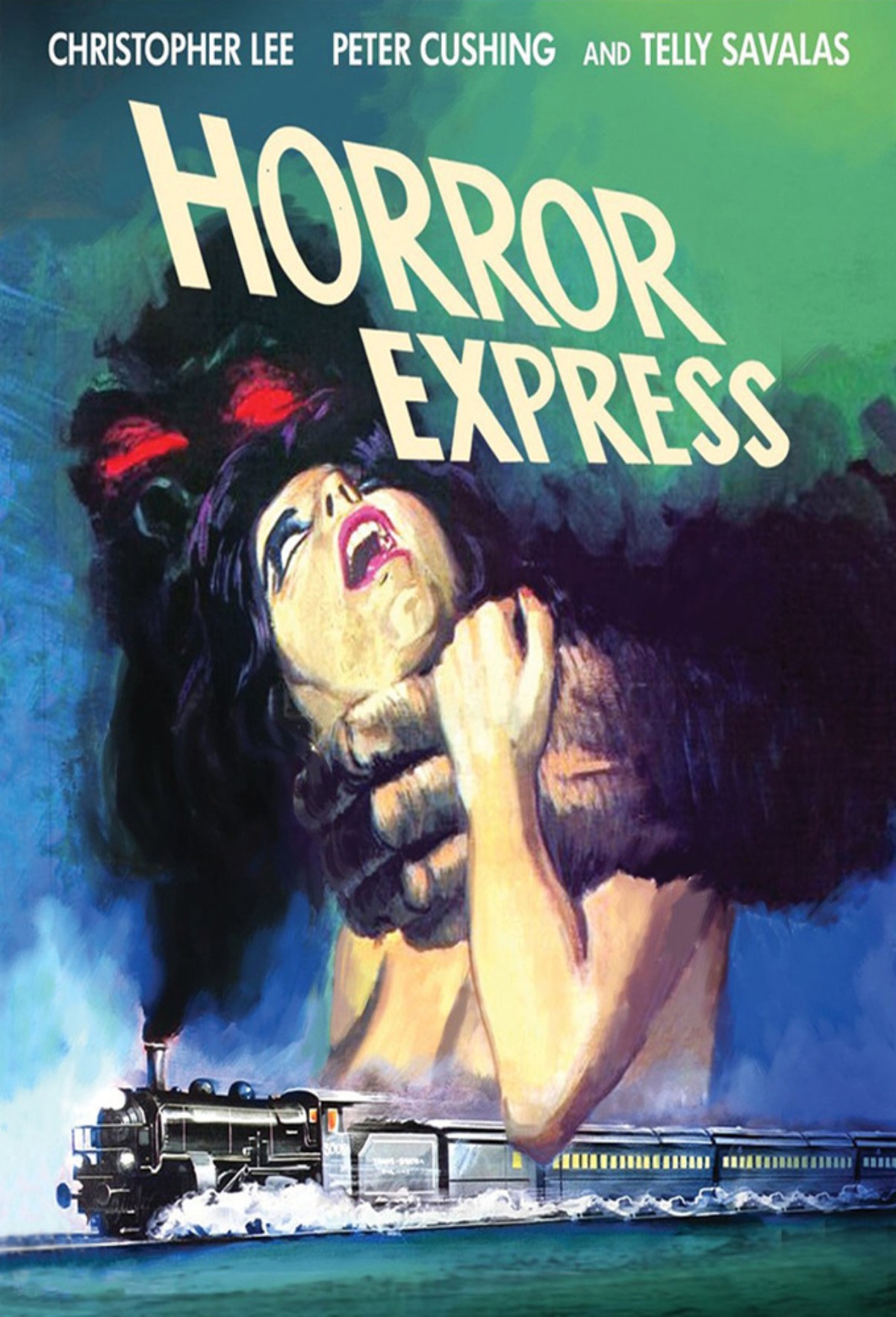 Peter Cushing and Christopher Lee once again find themselves cast as scientists forced to work together against an ancient evil force raised—as always—by mankind’s hubris in the face of the unknown. This time, evil takes the peculiar form of an intangible, brain-melting, bodysnatching alien necromancer frozen in a block of ice stored on the Trans-Siberian Express. Horror Express is one of the better of the many, many horror flicks starring the iconic duo—and there are at least 20. It’s a Hammer Horror if anything ever was, except it’s not a Hammer film at all. No, this movie starring English actors playing British scientists in Russia based on an American novella is actually from Spanish director Eugenio Martin.

This movie is so wholesome and good that even the story of its production is wholesome. Peter Cushing had decided to decline the role at the last minute, still in mourning for his wife who’d died the year before. Ultimately he was won over by the cast and crew, who made every effort to give him a friendly, familial place where he could do what he did best: play heroic, mustachioed detective/scientists battling cosmic threats with turn of the century science.

In fact, Christopher Lee was the one who really got him to stay in his role as Doctor Wells. The story goes that Cushing and Lee sat down one night and reminisced about the good times they’d had during their considerable careers – by the time Horror Express rolled around, they’d shared the screen more than 10 times.

It’s just kind of an adorable story and it makes for an equally adorable movie. Cushing and Lee get to play characters on the same team (for once) and it’s straight-up heartwarming. You can really feel how much everyone enjoyed their roles. Every actor hams every role up to the utmost, but with an endearing, wholehearted sincerity. These aren’t, like, your standard standard characters, either. There are opulent Polish noblemen, a mad monk who converts to Satanism, douchebag Cossacks, pithy scientists and a vodka-chugging Russian badass. And of course, our fearsome antagonist.

The monster-ghost-thing (you could call it a Thing, if you wanted) creeps around the train, sucking people’s brains and eating their memories. It commits enough mysterious murders in the second act to fill an Agatha Christie novel, swapping bodies with some poor proletarian once its frosty neanderthal body gets shot to death.

“That all sounds awesome,” you might be saying, “ but is it good?”

Well… Yeah, it’s kinda great. Cushing and Lee are legitimately excellent actors. Even though the special effects are the goofiest thing ever, the whole ensemble—from the cinematographer to the nonspeaking extras—plays along. Everyone is totally committed to freaking out about a brain-boiling ghost from space. The writing’s pretty much fine, although the plot’s really basic. It’s well-paced, well-timed, and funny. Plus, the soundtrack’s good. What’s not to like?

Every corny, preposterous thing that happens just adds to the overall greatness. There’s so much of it, too: the alien’s red flashlight eyes, the bleeding orifices, the white-eyed zombie slaves, and history’s most casual knife toss. It’s the little things that really make this movie so good.

Horror Express is a nearly-perfect cult horror movie. It’s not the most outrageous, or the worst ever, or the dumbest or the craziest or the nakedest. It’s got all the elements of an absolute classic, and as a bonus, it’s a great introduction to the world of Hammer Horror—even if it isn’t from Hammer.

There’s blood and killing, but nothing grotesque or noteworthy. There’s some stabbings, and at least one shooting. A number of people have their brains boiled by the thing’s psychic powers, and it makes their eyes bleed and turn white. So basically, it’s around 1.5x as violent as Power Rangers.

This movie is like, PG-13 at absolute best. I don’t think there’s even any implied nudity. Some people flirt, I guess? But if that counts as sexuality to you what are you doing reading Cultsploitation? Go back to bed, grandma.