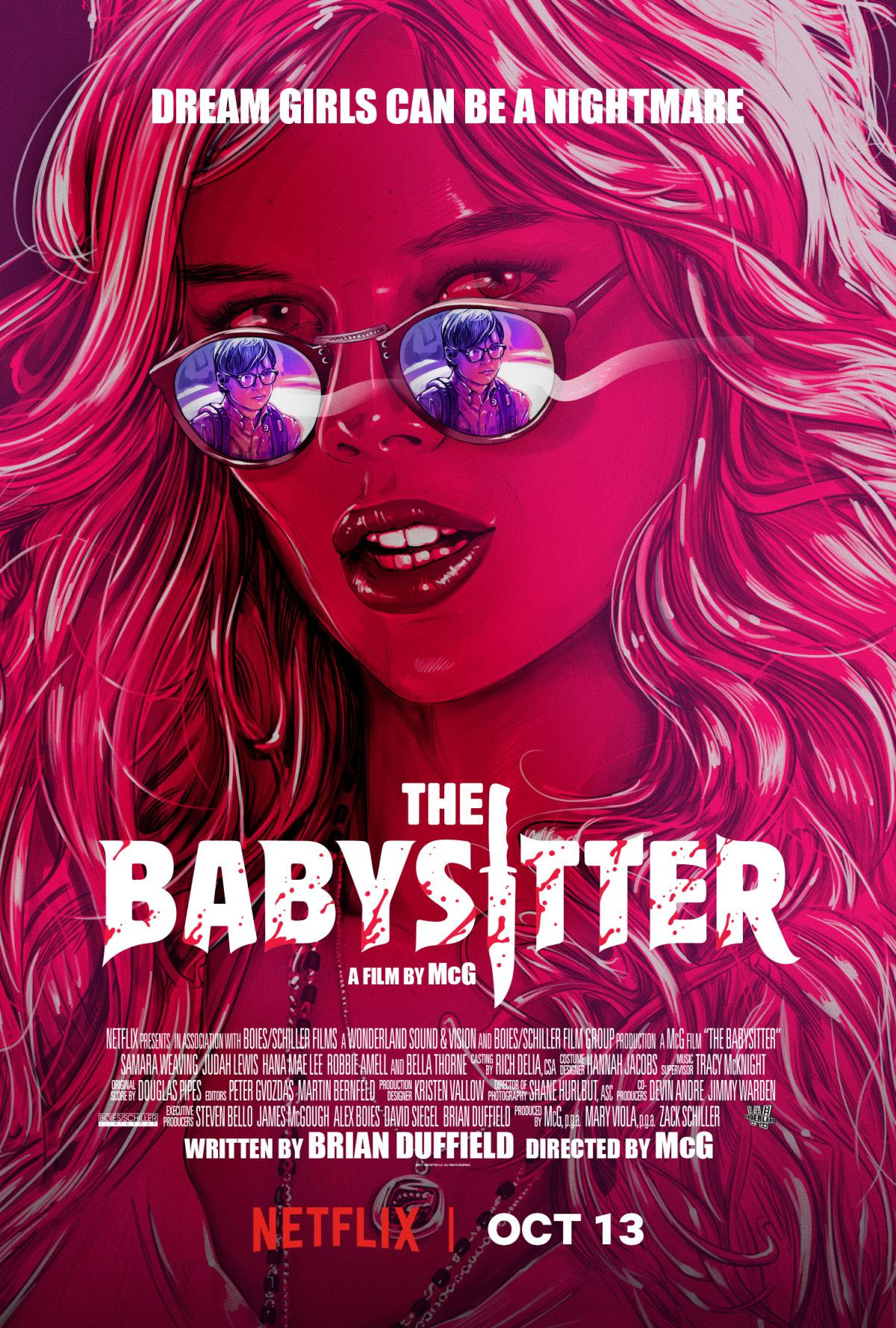 Young Cole is a shy and often anxious fourteen-year-old kid who still has a babysitter. However, Bee seems like the best kind of babysitter to have: she’s hot, super nice, and she loves geeky stuff just as much as Cole. He’s not exactly upset that he gets to hang out with her, but Cole is fed up with getting picked on a school, and it’s nice to have a refuge with Bee. But when his parents go away to a hotel for the night, Cole decides to stay up late to see what Bee does when he goes to bed; he finds out that she’s not the same person he’s known during their fun nerd times, and he becomes the target of a crazy cult attempting to make their wishes come true using his blood!

No, we’re not talking about the Alicia Silverstone The Babysitter (which was re-released not too long ago by Scream Factory): this 2017 film is a new Netflix Original directed by McG and written by Brian Duffield, and it’s a highly entertaining horror comedy that manages to craft a compelling narrative intermixed with quite a lot of gore.

As you can tell from the neon poster artwork, The Babysitter is heavily influenced by ’80s films – not just horror, but the kid-friendly ones like The Monster Squad and The Goonies where the odd but lovable heroes are children still in their awkward pubescent stage. In this case, Cole (Judah Lewis) is the sole protagonist: goofy, geeky, and weird, he’s certainly not the type of kid to easily make friends at school, but he’s the perfect blend of affable and able for a film about a cult of young adults attempting to steal his blood and perform a spell that grants them anything they wish.

McG does a great job of setting up the film as something of a shock for those audience members who don’t know a lot about its plot. The first act is all about Cole’s relationship with his babysitter Bee (Samara Weaving) – he’s clearly somewhat smitten with her, but it’s mostly because she treats him with dignity that he doesn’t get from his classmates and even his parents. Bee’s the cool older woman who still wants to hang out with him even if it’s because that’s her job, and The Babysitter expertly crafts a funny, stylish comedy out of these parts.

And then things get bloody when Bee invites her friends (Bella Thorne, Robbie Amell, Hana Mae Lee, Andrew Bachelor) over for a game of spin-the-bottle truth-or-dare and then a cult ritual that involves sacrifice and the blood of an innocent. The Babysitter quickly goes from a slice-of-life comedy a la The Wonder Years to a more violent and darkly humorous Home Alone, with Cole fending off these kids with bug spray, fireworks, treehouses, and more. The film is well-paced and delivers a lot of great bits of wry comedy, but its best offering are the gory setpieces that are often surprising.

And McG’s film has a lot of heart, too, because there’s definitely an emotional comedown once Cole finds out that Bee isn’t the awesome person he thought she was. As Cole’s sole tether to “normalcy,” he’s obviously more devastated at the fact that she’s been faking her love for him this whole time. But The Babysitter comes to a compelling conclusion as Cole finds out that he’s the hero in this scenario, the one who vanquishes the big bad and gets the girl. The film’s constant references to movie boss scenarios comes full circle in the climax, and it adds an enjoyable level of metahumor to the film’s already obvious inspirations and references.

Fans of retro throwbacks and gory comedies will find a lot to enjoy in The Babysitter, and even viewers who aren’t big on gore will be able to look past the bloodsoaked vignettes because of their over-the-top portrayal. Fun, adventurous, and witty, this is a movie you should stay at home with; you’re never too old for this Babysitter.

The film has a surprising number of violent scenes, though the gore and blood spray is clearly exaggerated for effect. Head stabbings, explosions, hangings, and a brutal shotgun blast are just some of the gruesome things you should expect to see in the film – all done to great effect.