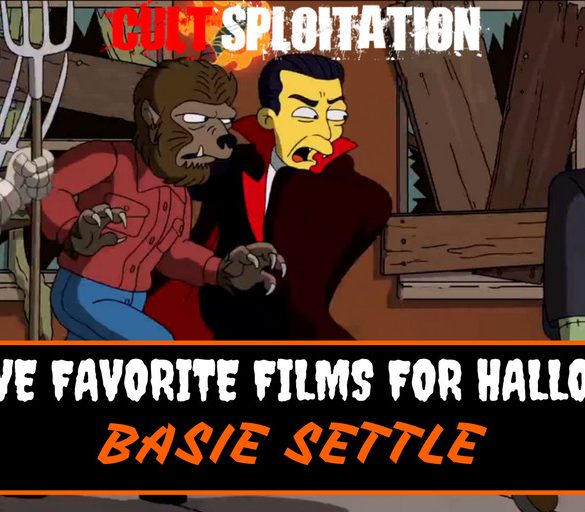 CULTOWEEN 2017: My 5 Favorite Films for Halloween by Basie Settle

We asked our contributors: what are the five films that you love to watch the most for Halloween? As horror fans, we watch genre films all year ’round, but there’s something special about checking them out when the nights are crisp, the leaves are blustery, and the orange lights are glowing. Here are five films for Halloween from our Cult Throwback contributer Basie Settle.

Trick ‘r Treat is only ten years old this year, but if it’s not a cult classic then absolutely nothing is. Featuring True Blood‘s Anna Paquin (Sookeh!!) this is easily the most Halloween-party-oriented movie ever made. It’s violent, shiny, modern, and dumb in only the best and most intentional of ways. Trick ‘r Treat has that edgy, self-aware attitude.

This film is an anthology held together by the classic framing device of “Halloween in a town that’s haunted as fuck.” Five stories weave in and out of each other, until the awesome last act ties it all together. Then again, that doesn’t matter at all: it plays out in a way that allows you to not pay much attention to the movie and still get everything you want out of it. There’s sleazy sex, dumb jokes, crazy supernatural violence and enough real, wince-inducing horror to keep your drunk buddies hollering right until the end.

What’s there to say about John Carpenter’s untouchable magnum opus that hasn’t already been said? It’s as close to “perfect cinema” as a ridiculously over-the-top, ultra-violent scifi-horror monster flick can be. The practical effects are incredible—as good or better than any in horror have ever been (fight me, Cronenberg nerds) and the writing, story, and acting are all totally on point. Even Kurt Russell, lord of ham and devourer of scenery, turns in a compelling performance as Snake Pli– Uh, I
mean, as RJ MacReady, de facto badass leader of our unfortunate heroes.

What makes The Thing so great—apart from all that awesome shit I just said—is how many different ways one can appreciate it. Throw The Thing on at a Halloween party, and even your drunk, half-watching bros will love it for the ridiculous fountains of blood and gore, crazyass monsters and also exploding dogs. Put it on with some friends at your next movie night and watch your buddy’s date who doesn’t really like horror lose their fucking mind. Show it to your grandma, she probably saw it in
theaters and honestly you don’t spend enough time with her anyway, James.

Return of the Living Dead

The Return Of The Living Dead is the iconic punk rock zombie flick that time forgot. If this were a list of underappreciated movies, this would be the only entry. You know why pop culture zombies eat brains? Return of the Living Dead. Featuring some of the first talking zombies since the old-school zombies of the 1930s, this incredible clusterfuck has so many amazing lines it’s impossible to quote them all, but – “SEND! MORE! PARAMEDICS!”

It’s the perfect pregame movie for an evening of obnoxious drunken cavorting and mischief. In fact, a large portion of the movie (and the rest of its five-part franchise) centers around destructive, stupid revelry. It’s the kind of movie that comes with a built-in drinking game, and luckily, The Return of the Living Dead drinking game rules are pretty straightforward: Drink. Drink now. Always be drinking. Don’t stop.

All of cult auteur Stuart Gordon’s really memorable hits are two things: based on the works of horror writer HP Lovecraft, and totally out of control, crazy-go-nuts bonkers. Re-Animator, the crown jewel of the legendary Gordon canon, is easily the bonkers-est of them all. While most of Gordon’s other cult classics aren’t great for parties—they’re either way too gross or way too serious—Re-Animator is one of the most party-friendly things I’ve ever seen.

It’s gory, hilarious and rad. It’s so radical and extreme that if this movie were a person, it would be a kid on a skateboard punking the principal with a balloon full of pig’s blood. That said, this is definitely not for everybody. If Return of the Living Dead went over well with your party crowd, you can bet your ass Re-Animator‘s gonna be a huge hit.

Beyond the Black Rainbow

This one’s been on the receiving end of a lot of shit talk: it’s been called “weird,” and “slow,” and “not a horror movie,” and I mean… mostly, yeah, that’s true. It’s weird and it’s slow—but if you didn’t think it was a horror movie you straight up weren’t paying enough attention. There’s very little dialog in this, because Beyond the Black Rainbow spends a full 75% of its runtime cultivating its ethereal, retro-psychedelic aesthetic. Basically what I’m saying is that you should be on drugs when you watch this. It’s for parties with drugs.

That isn’t to say you have to be high for Beyond the Black Rainbow, but it really helps. It’s pretty good if you’re sober, like if you ran out yesterday or whatever – Beyond the Black Rainbow provides its own drugs. While it’s a little light on the plot and story (they’re there if you look for em, but why bother?) it more than makes up for that with the raw experience. The soundtrack, the cinematography, the editing – everything melds together like that melting skull in that one really crazy part to create the trippiest horror flick of all time.