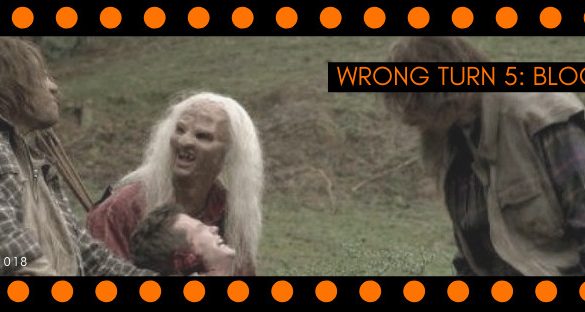 It seems I most certainly have made a wrong turn by picking Wrong Turn 5: Bloodlines as a film to cover for Halloween. See, the weird thing is that this fifth entry in the series does take place on Halloween; it’s just that there’s no Halloween in it besides a couple mentions of the holiday. Instead, it seems a small town in West Virginia has decided to hold a music festival called Mountain Man on the same day as Halloween for shits and giggles, and now no one seems to care it’s Halloween at all. That’s why our five super annoying friends are headed there for a little rest, relaxation, and doing copious amounts of drugs including weed, Ecstasy, and mushrooms.

I’ll be honest – I’m pretty sure I’ve only seen the first Wrong Turn film. It’s a pretty fun generic slasher rip-off of The Hills Have Eyes and Just Before Dawn, and I have no problems with it; it’s even got Eliza Dushku! But seriously, someone thought it was important to have five more films about the same damn thing, over and over again? The franchise never had staying power, and Wrong Turn 5: Bloodlines proves exactly why overly dumb setups don’t work.

Unfortunately, Doug Bradley gets wrapped up in this car crash as serial killer Maynard Odets, who has assembled three malformed cannibal brothers to help do his bidding in the backwoods of this town. Bradley does the best he can – and you can almost see the weight of the film resting on his shoulders – but Declan O’Brien’s writing is far too poor for Bradley to do much here. Instead, Wrong Turn 5 just cuts between Maynard in jail taunting other victims, the three killer brothers brutally slaughtering the friends, and couples humping their brains out. The most outlandish thing is that all of the women seem to be having mind-blowing orgasms, which certainly seems to go against normal probability.

To be fair, Wrong Turn 5‘s gore is pretty good; it’s like the only thing the film has going for it. O’Brien’s plot is brutal and mean-spirited and, for the most part, it works. But other than those various set-pieces throughout the movie, the rest of the film is such a boring slog that I’m pretty sure most audiences can guess what happens without even needing to see a minute of the film. It’s that derivative. And setting this film on Halloween and never doing anything with that element means I’m giving Wrong Turn 5: Bloodlines -50 stars.