CULTOWEEN 2019: You should watch THE HALLOWEEN TREE this year

Back in 1993, Cartoon Network released The Halloween Tree as a TV movie adapted from the Ray Bradbury story of the same name. In 1993 I was 4 years old, so unfortunately I didn’t get to experience this magical holiday cartoon at the time. In fact, it took me until just this year to watch the film despite seeing it on a number of recommendation lists as mandatory Halloween viewing. And so I am writing this essay for Cultoweeen in the hopes that I can persuade you not to make the same mistake I did, because The Halloween Tree is a really fun animated feature for the season that, unlike some other Halloween specials like Halloween is Grinch Night, actually features a lot of traditional All Hallow’s Eve symbolism.

Part of that is because The Halloween Tree is basically a kid-friendly look at the cultural and historical significance of the season. Our main kid characters are buoyed on Halloween night winds by the questionably-motivated Mr. Moundshroud to different time periods and areas of the world, experiencing the Mexican Day of the Dead festival, Celtic Druid celebrations, Notre Dame’s Gothic cathedrals, and the Egyptian Feast of Ghosts. We’re treated to an explanation of the origins of the holiday along with a lot of spooky and dangerous excursions as the kids fly high through the sky around these different times chasing after their ghostly friend Pip. 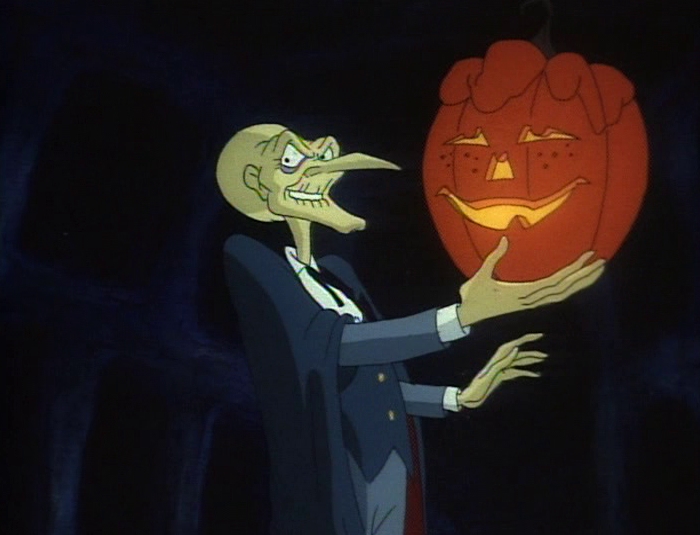 But where The Halloween Tree really excels is in its forefront explanation about death. Pip is unable to celebrate the kids’ yearly Halloween festivities because he’s being taken by ambulance to the hospital due to appendicitis, and Mr. Moundshroud’s involvement is sort of akin to the Grim Reaper – he collects jack-o-lanterns on his Halloween tree, captured souls that disappear after Halloween has faded at dawn. Pip, as an apparition, is constantly flitting through time to escape Moundshroud’s grasp, knowing full well that if he doesn’t elude Moundshroud, he’ll be joining that spooky Halloween Tree.

The inherent idea here is that Pip is on the cusp of death, and that his friends are forced to reconcile the fact that he might not be returning for subsequent Halloween seasons. Their jaunt through time is a way to explain how every culture has come up with some way to deal with death, from the celebration of life that is Day of the Dead to the ways that cultures have incorporated monstrous visages in their everyday life. It’s a great way to introduce children to the idea with frightful scares and a lot of fun, and adults will still have a blast learning about Halloween in all its elements.

It also helps that the artwork is great, with a lot of classic Halloween objects littered throughout. Ghoulish yet touching, with an age-appropriate amount of thrills, The Halloween Tree should grow as one of your favorite holiday specials – provided you can deal with the creepy Mr. Moundshroud.