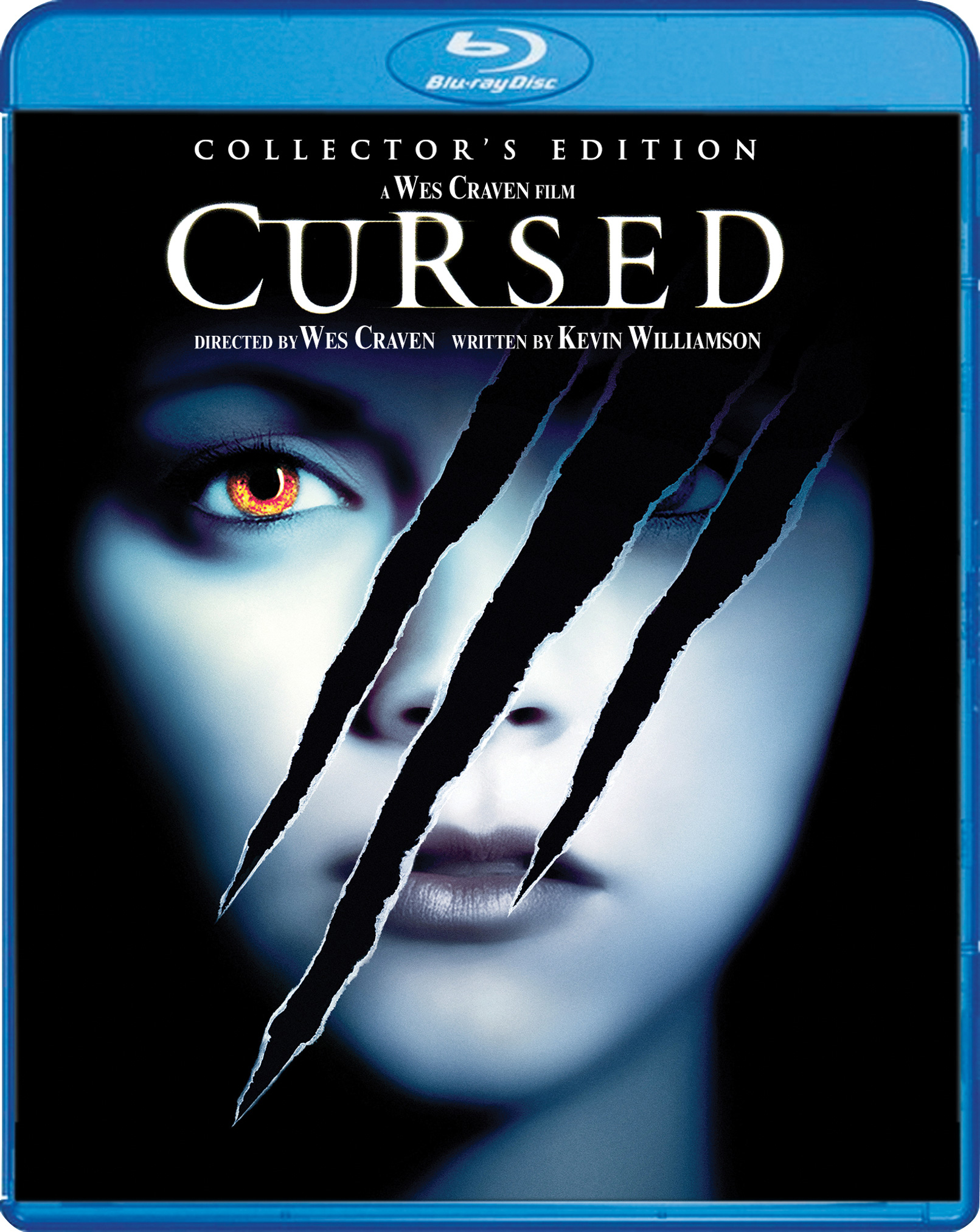 Those first seeing the powerhouse duo of Wes Craven and Kevin Williamson listed on the cover of 2005’s Cursed might be confused to find that it is a seldom-discussed film in their respective canons. The team who brought us Scream, back again for a werewolf film? Why isn’t this widely regarded as an amazing movie in the subgenre? Unfortunately, for those that have seen Cursed or have followed the production woes behind the film, it’s much more understandable to have a less-than-favorable opinion. Literally cursed with re-shoots, various cast removals, special effects transitions, and a massive re-write of the original story, Cursed could be one of the most prominent entries listed under a Production Troubles Wikipedia page. And to top it all off, the re-shoots focused on securing a PG-13 rating, leaving most of the gore on the cutting room floor.

The result was, unsurprisingly, disastrous upon release. Subsequently Cursed would get an unrated cut released to home video that is honestly the better way to watch this film, and the version that I watched for this review. But ultimately, the production intrusions into the film are a noticeable hindrance to Cursed, because everything plays out like an extremely watered-down version of Craven and Williamson’s work.

Cursed is not a terrible film, it is simply aggressively average. It’s as average to werewolf movies as Jesse Eisenberg is to acting. It features Christina Ricci and Joshua Jackson and neither are really allowed any room to conjure up any chemistry. The writing is clearly in Williamson’s style, but its storyline falls short of producing a truly unique take on the werewolf genre. Too often Cursed struggles to find a tone, alternating between The Howling and Teen Wolf without recognizing the incongruity of its approach. It would be easy to blame Craven’s direction if not for the fact that production oversteps are known and often very apparent.

If you like werewolf films and don’t mind a derivative take on the subject, Cursed isn’t too bad as long as you can forgive the ’00s CGI that at times boggles the mind how it escaped peer review. With that said, this is neither Craven nor Williamson’s best work, and in fact very rarely feels like a product of their creative output at all. The unrated cut makes it marginally better with the addition of more gore effects, but ultimately Cursed is lacking bite either way.

Scream Factory has released Cursed on Blu-ray as part of their Collector’s Edition series, which is somewhat surprising considering the limited offering on this 2-disc edition. Primarily, the film gets a new 4K transfer from the original camera negative for both the theatrical and unrated cuts, which appear on two separate discs. For the most part, these transfers are identical besides the extra 2 minutes of footage on the unrated version.

The image quality looks quite good, with virtually no damage to the OCN to speak of. Grain is very light though not DNRed to oblivion. The film doesn’t feature a lot of minor details in most of its running time, but skin tones and clothing textures remain consistent. The film features a fairly dark palette at times, and this transfer does have some heavy blacks, but they don’t appear crushed or lose delineation. Color timing seems appropriate and consistent. Ultimately, it’s a strong transfer that offers both versions of the film, though the unrated is definitely the way to go.

Two audio tracks are offered for both cuts of the film: a DTS-HD MA 5.1 track and a stereo 2.0 track as well. Both sound good with no drops or dialogue issues, though I did prefer the 5.1 for the additional surround effects that appear during more action-oriented sequences. English subtitles are also included for both cuts.

Extra features are, as mentioned above, surprisingly limited for a release of this stature. Scream Factory presents only two new interviews for this release, both contained on the theatrical cut disc. Derek Mears, who did the stunt work for the costumed werewolf, discusses his time on set and truly seems to be grateful for the chance he had on Cursed. Editor Patrick Lussier provides a longer overview of his extended editing stay on the production and dives into some of the major production problems that plagued the release and the changes that were made for re-shoots.

However, there is a pall around these interviews, as though there was an intentional decision made to elide these extras of any truly strong criticism of production woes. It is extremely odd that there’s not at least an audio commentary or longer featurette dealing with the various missteps along the way, and that does smack of a certain moratorium on discussing those issues.

Also of note is that none of the purported shot footage from the original shoot is included on this disc, not even unfinished content. Presumably rights issues got in the way of including this, but it’s still somewhat strange to have a Collector’s Edition so devoid of additional content that’s ripe for the picking.

Collected for this release are additional production featurettes that were included on past releases, and on the unrated version, Greg Nicotero and Derek Mears discuss some select special effects scenes.

Cursed features a strong transfer of both the theatrical and unrated versions of the release, though mostly hardcore Craven fans need apply since the movie is still something of a blunder all around. Extras are lacking considering this is a Collector’s Edition release, and honestly the dearth of conversation about the production is questionable. 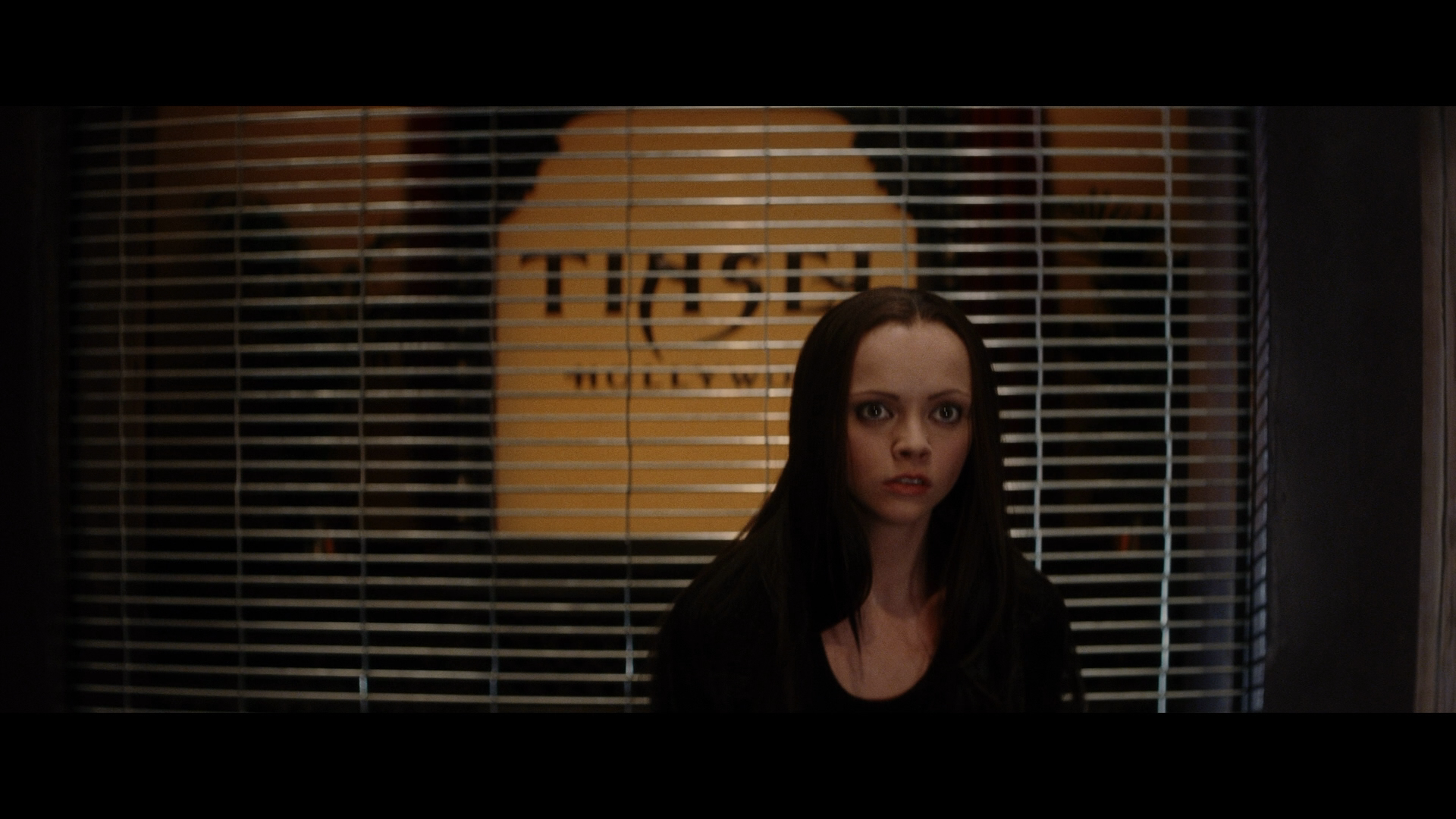 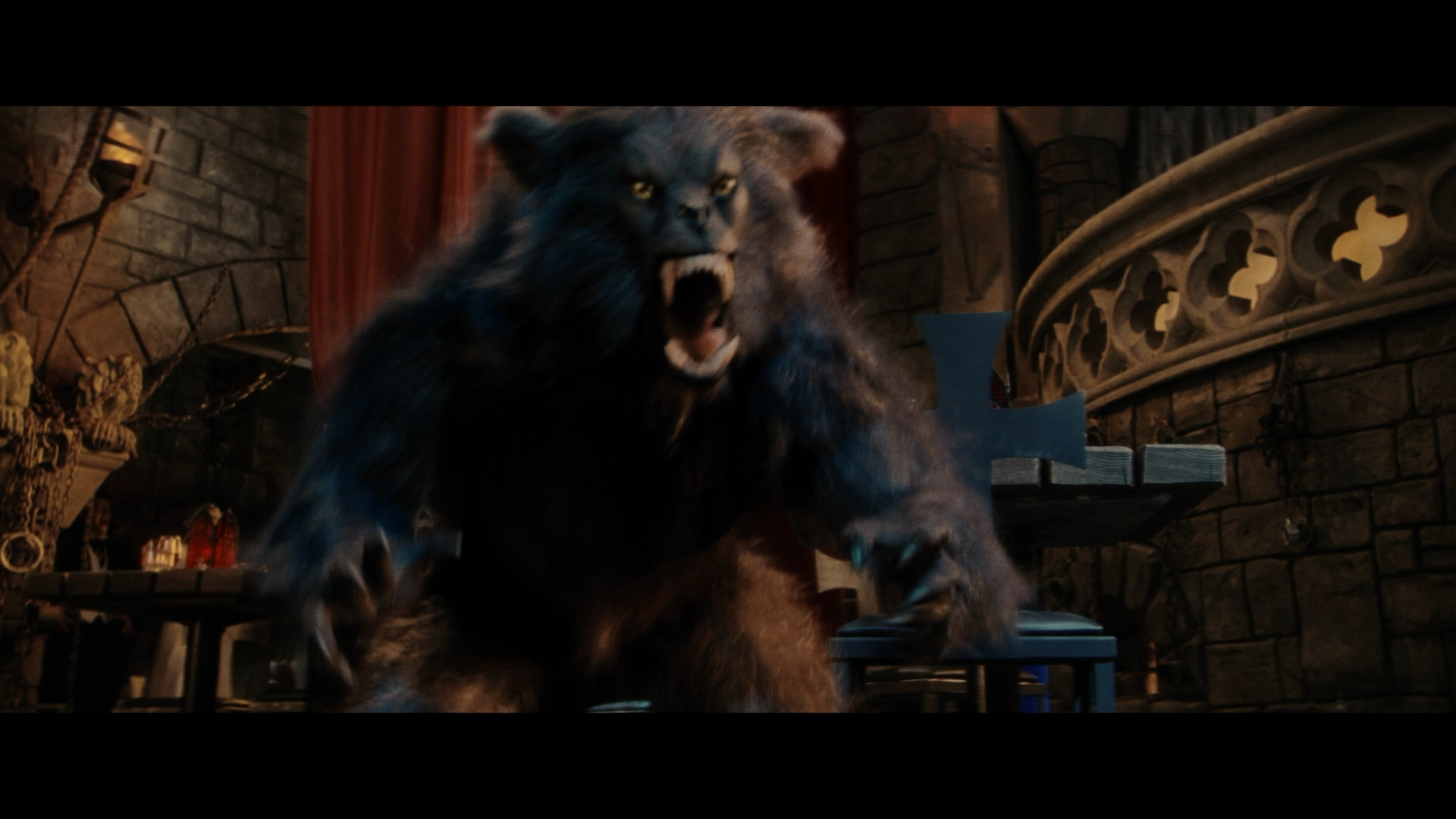 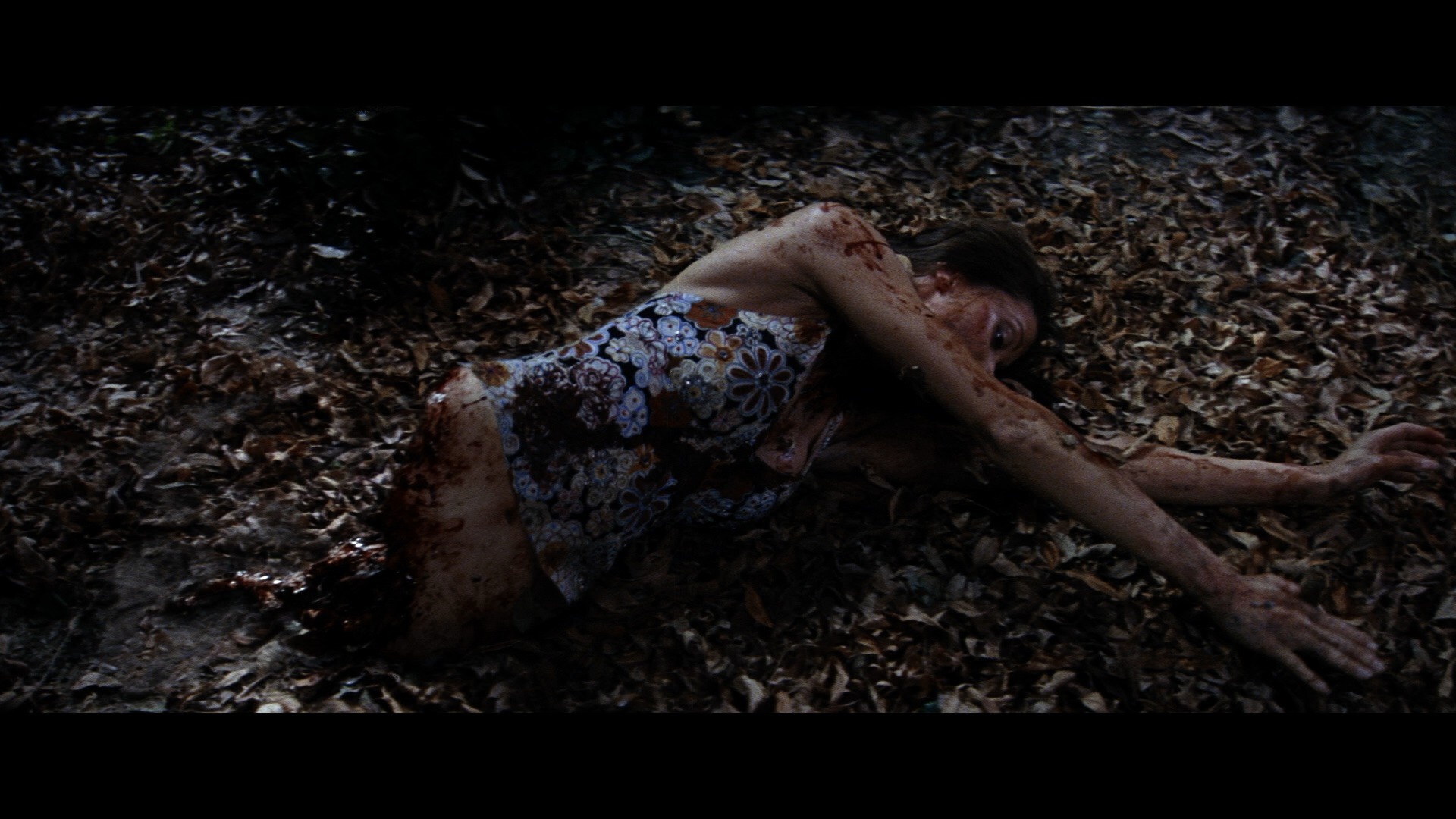 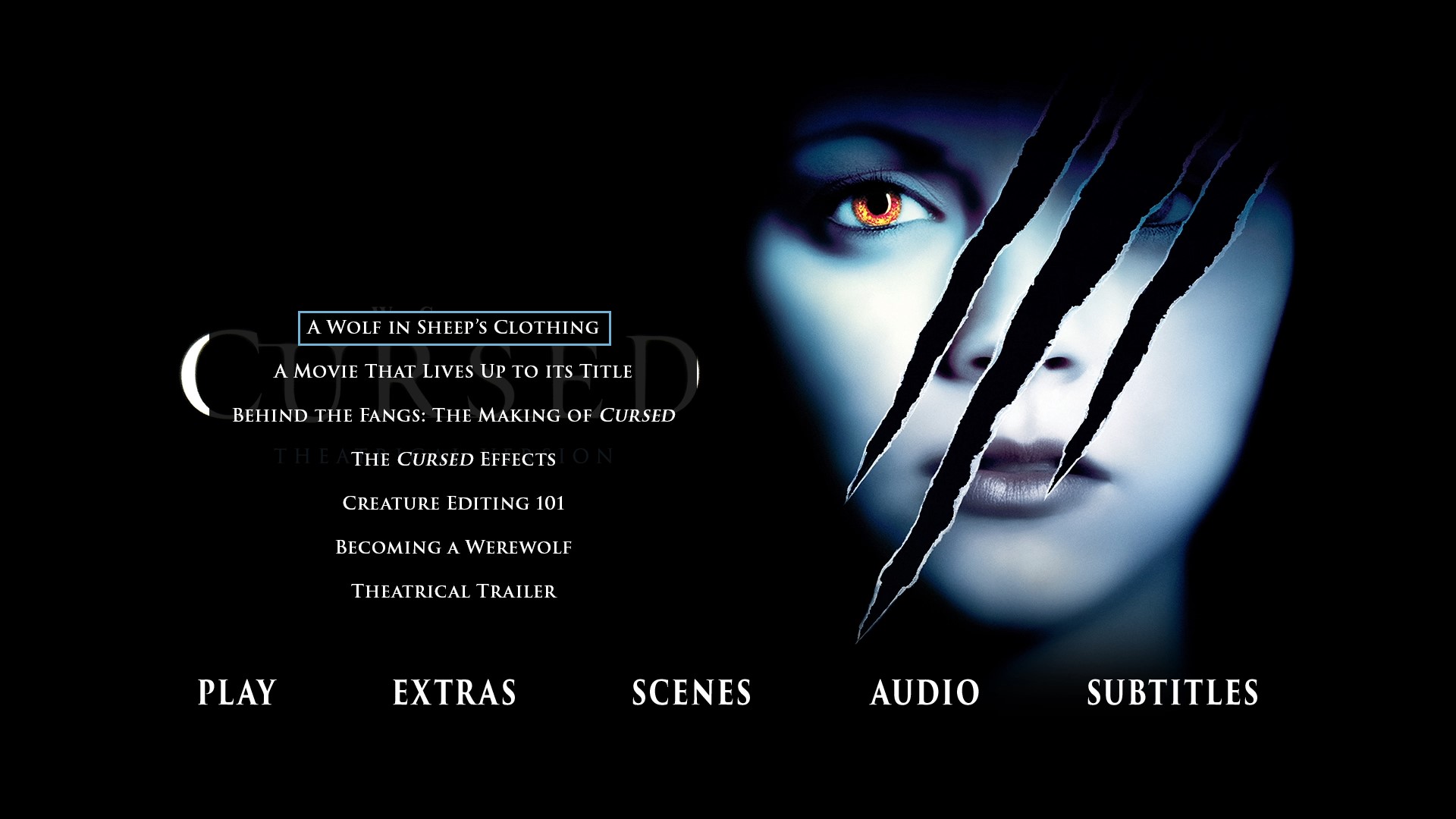 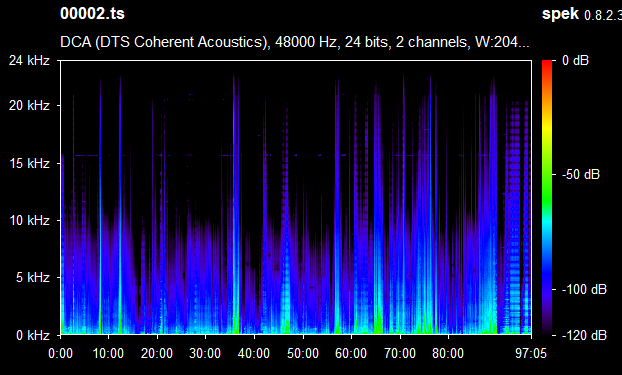 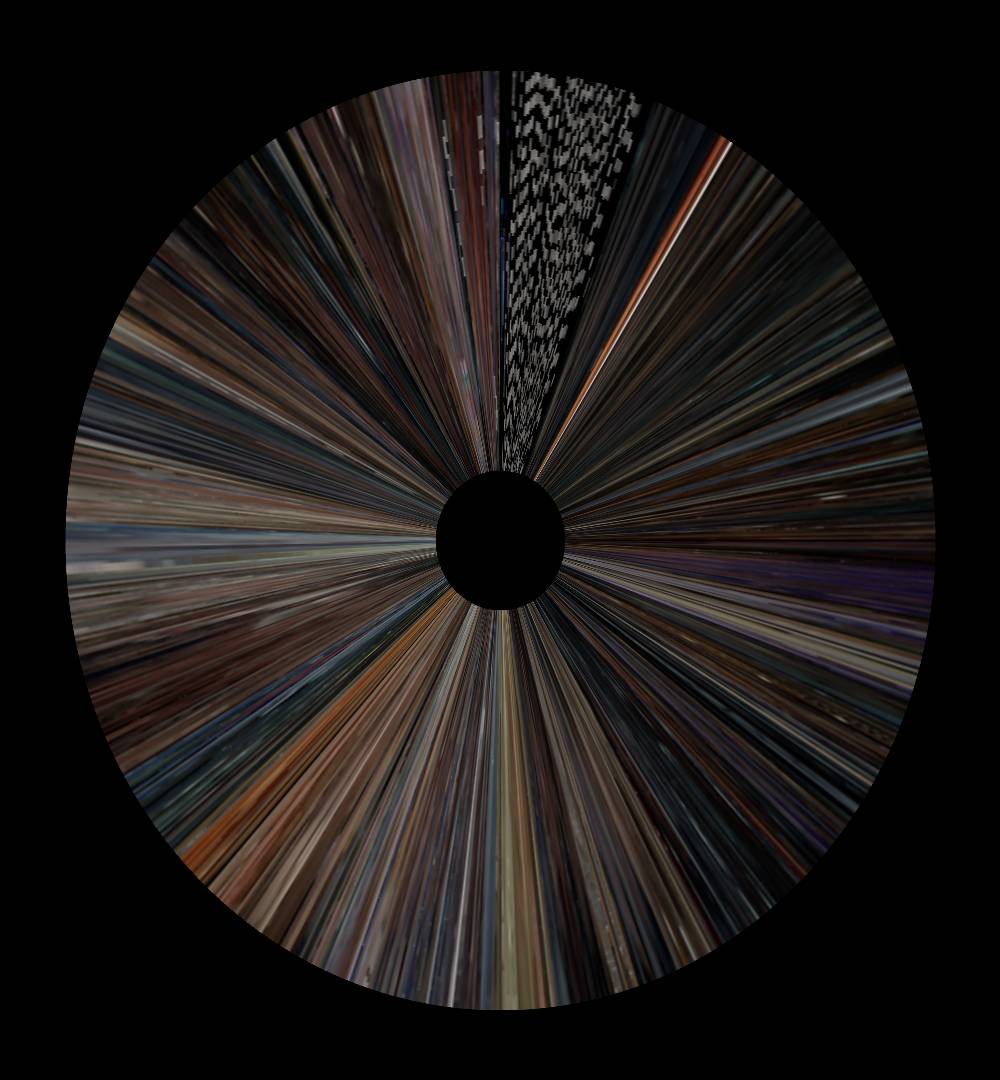 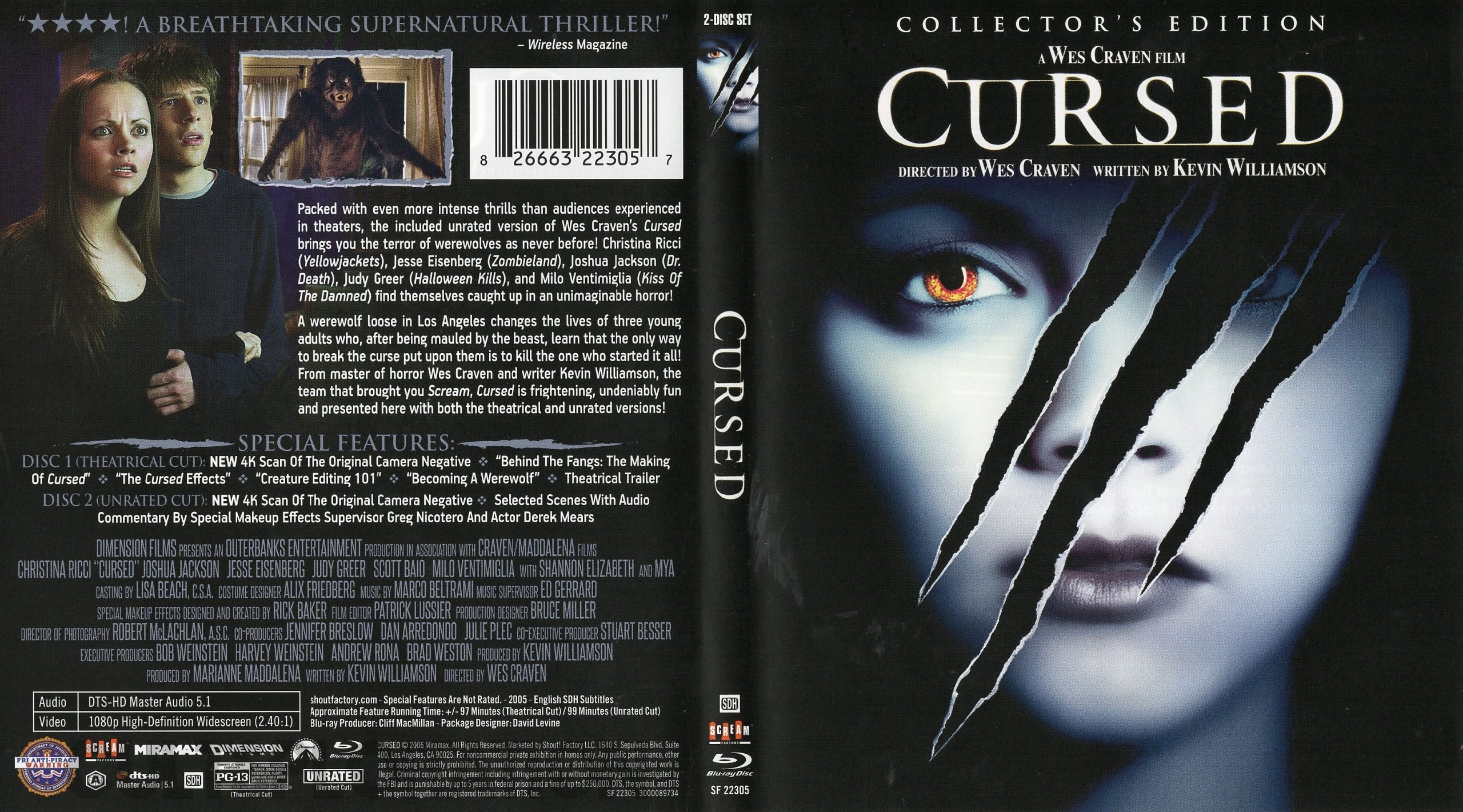 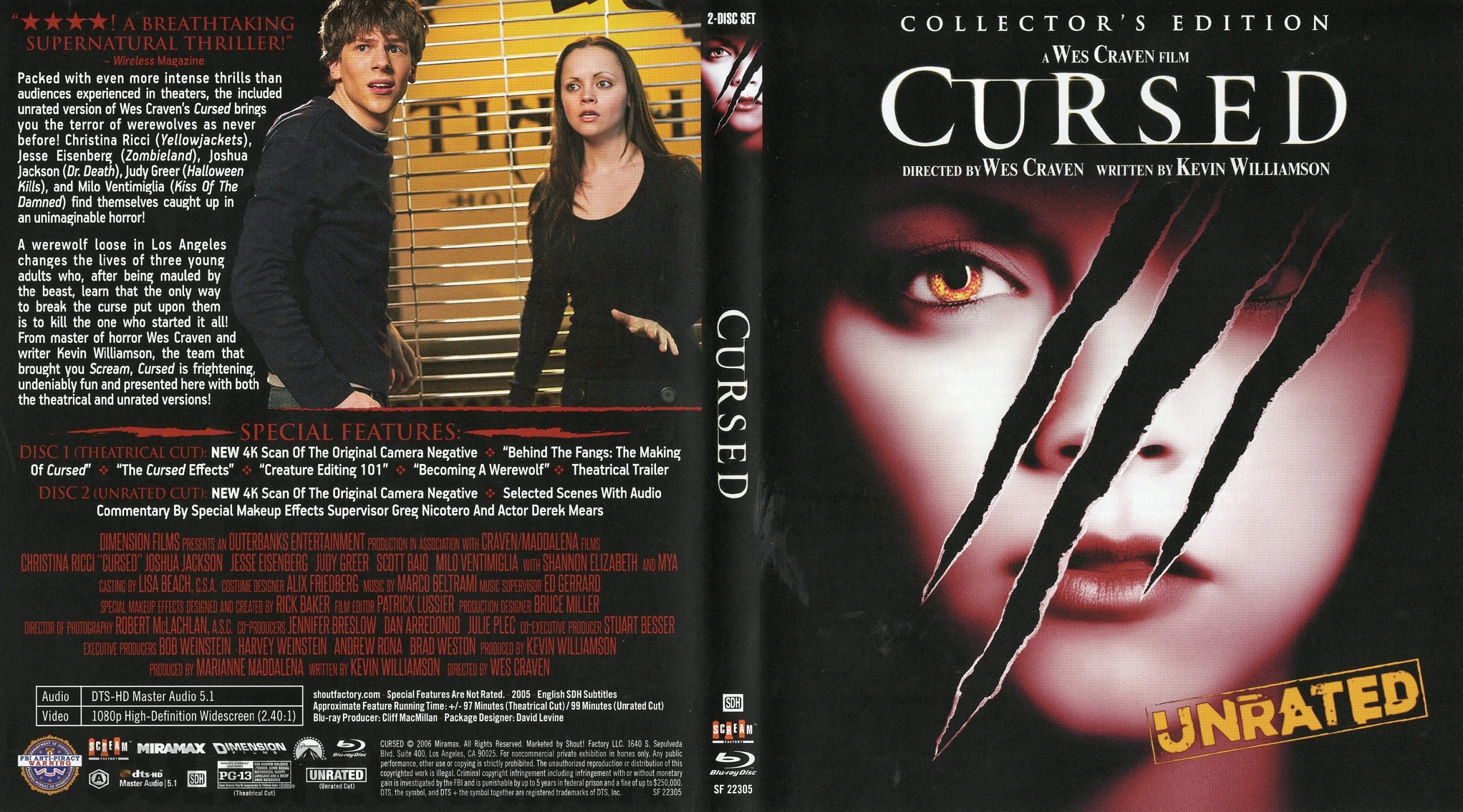 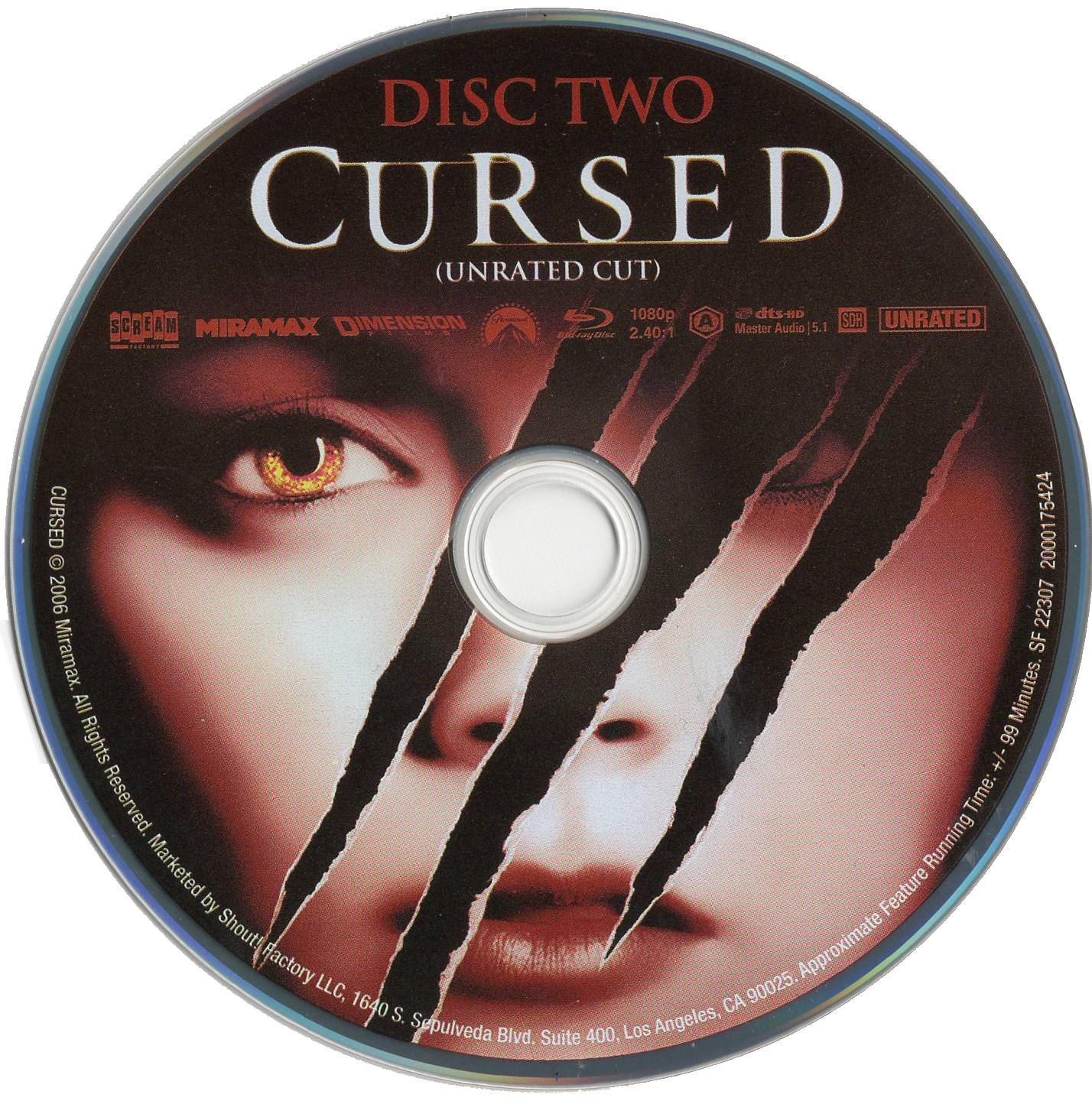 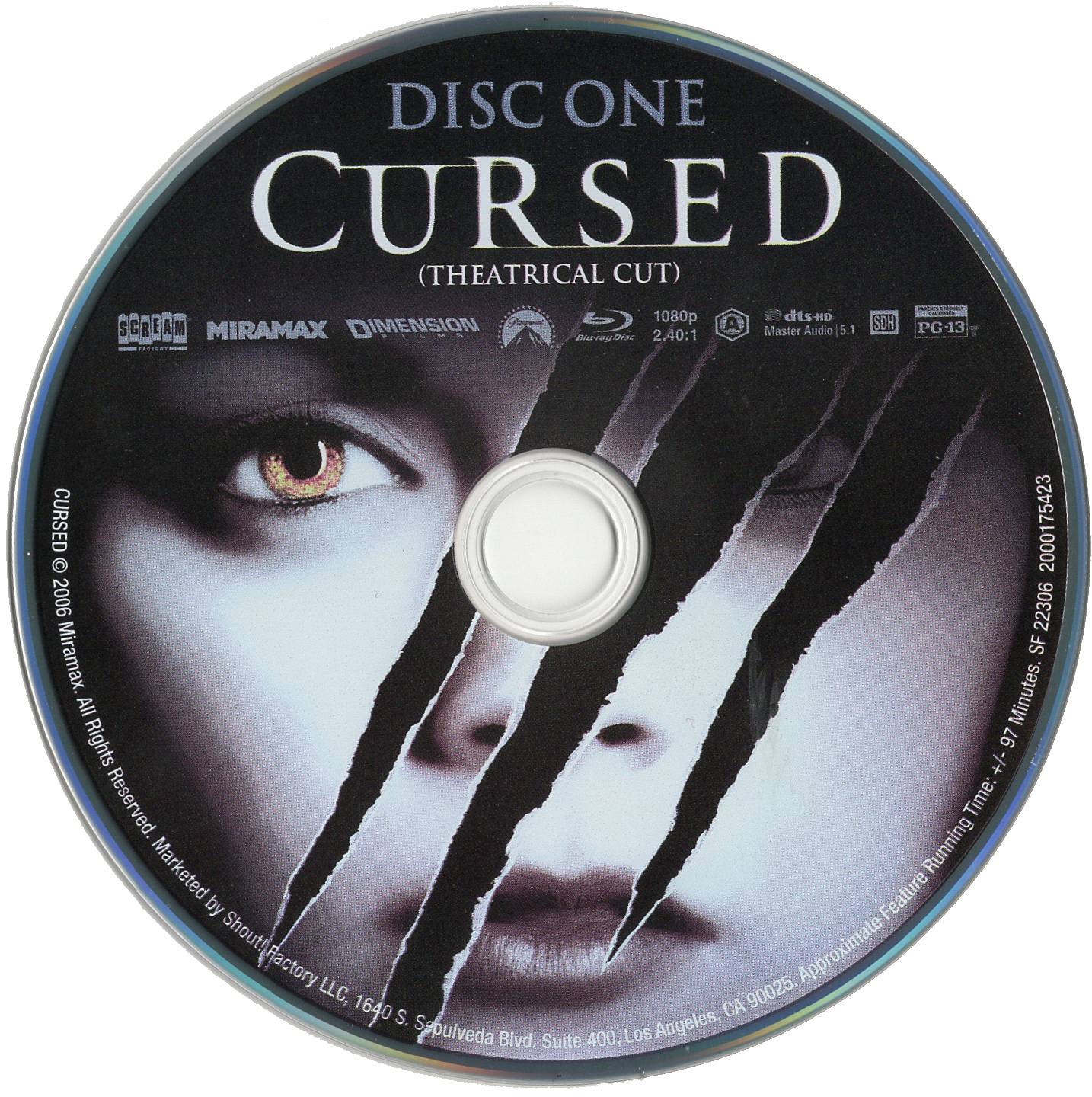