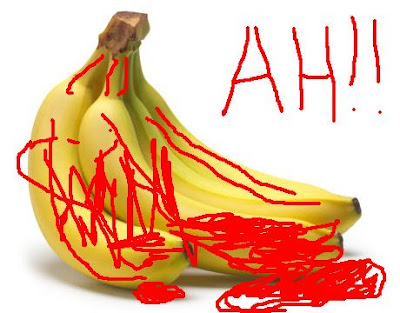 Lately, I’ve been reading some guro manga by Shintaro Kago. If you’re not up on your Japanese, Kago writes gruesome stories about seemingly ordinary people who do crazy things, as if we all have some strange secret or fetish. For instance, say you really like your neighbor. He’s a friendly guy next door, helps you out by shoveling your driveway or something (if you don’t get snow where you live, please swap that out for mowing your lawn or trimming your hedges ). 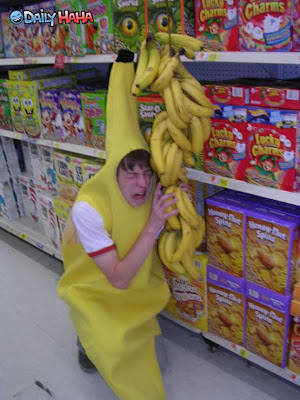 But this guy’s got a weird secret that no one knows about. Let’s say that this dude really loves his bananas. He comes home with bags and bags of them; green, yellow, plantains, even rotten bananas. As a casual onlooker, you might think nothing strange about it, because we don’t normal jump to evil conclusions. Instead, we’d say something like: “Oh, maybe he’s having guests; maybe he runs a banana smoothie shop; maybe he just likes his banana splits; maybe he’s a fruitist.” But we most certainly would not say that he likes to seduce unwilling women back to his home, invite them in for some food, and then stab them in the heart with a stiff banana. No, that would never cross our minds, because this is reality, and reality cannot be as strange as fiction.

This exactly the type of thing Shintaro Kago might introduce into his manga, only with much more perverted themes that I’m not going to get into in this shpeel.

Let’s talk about what might happen were we to see banana stabbings, or banana violence, in a film.

1. Banana stabbings would be a logical progression for a slasher film set in a grocery store.
Let’s face it: most slashers aren’t that inventive. So banana stabbings are a great way to heighten the creativity and irony in the film. Maybe the slasher is actually one of the victims trapped in the grocery store, so he or she can’t carry around any visible weapons. Bananas are perfect! No one would suspect that that Chiquita banana would be the item to kill them off.

Or maybe it’s a defensive weapon for the victim. The killer is running at them while the victim is lying on the floor in (undescribable) pain, the victim grabs a banana, and holds it out in front of him while the killer thrusts himself onto it! Of course, it may take a stroke of luck, as most bananas would crumble under the weight of a person, but if that doesn’t work, you could always 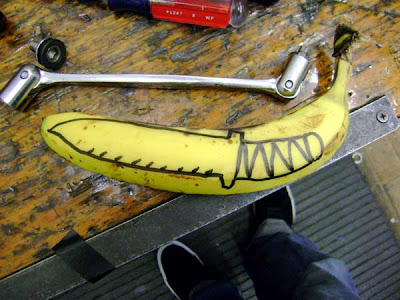 strike the killer in the head with it. Maybe the victim was even the banana tender! What irony would that be to have what the character hated save him or her from certain death!

Lest we give a woman a banana as a weapon, we add psychological analyses to our film, since the banana looks like a phallis, providing a nice Freudian slip. Except we all knew when we added that to our film that it was only for the story and that psychological standpoint is BULLSHIT. (Note my sarcasm toward this standpoint.)

2. Bananas can be easily disposed of.
That’s right – if you need to get rid of the bloody murder weapon, just eat it! Hopefully, most of the blood will be on the peel of the banana, and the killer could always throw that in the spreading blood pool as a calling card.

3. Use it to capture the prey – or your enemy.
It may seem illogical, but banana peels really are slippery. Throw them down and BAM! Someone should be sliding right into the killer’s open arms and knife-endowed hands. Same for the victim who’s trying to get a leg up on the killer.

But there’s another, better use for the killer here – the fat boy lure. Say you’re the killer, and you’ve stuck everyone in a room where they can’t get out. Drop a banana by a doorway, and the stereotypical fat boy will wander over for a bite to eat. You could poison the banana, but that wouldn’t be fun, and would mimic Snow White’s poisoned apple too much. Instead, the killer could grab the kid by the neck and start stuffing bananas into his throat until he suffocated. Much better and more grotesque.

Deaths I’d like to see – anything with bananas as a primary weapon. Get to it filmmakers. If anyone would actually like to make this death, please send the video to my email address or post it in the comments section. It’s the fruit that kills…

Thanks to whoever for those weird and strangely fitting pictures…