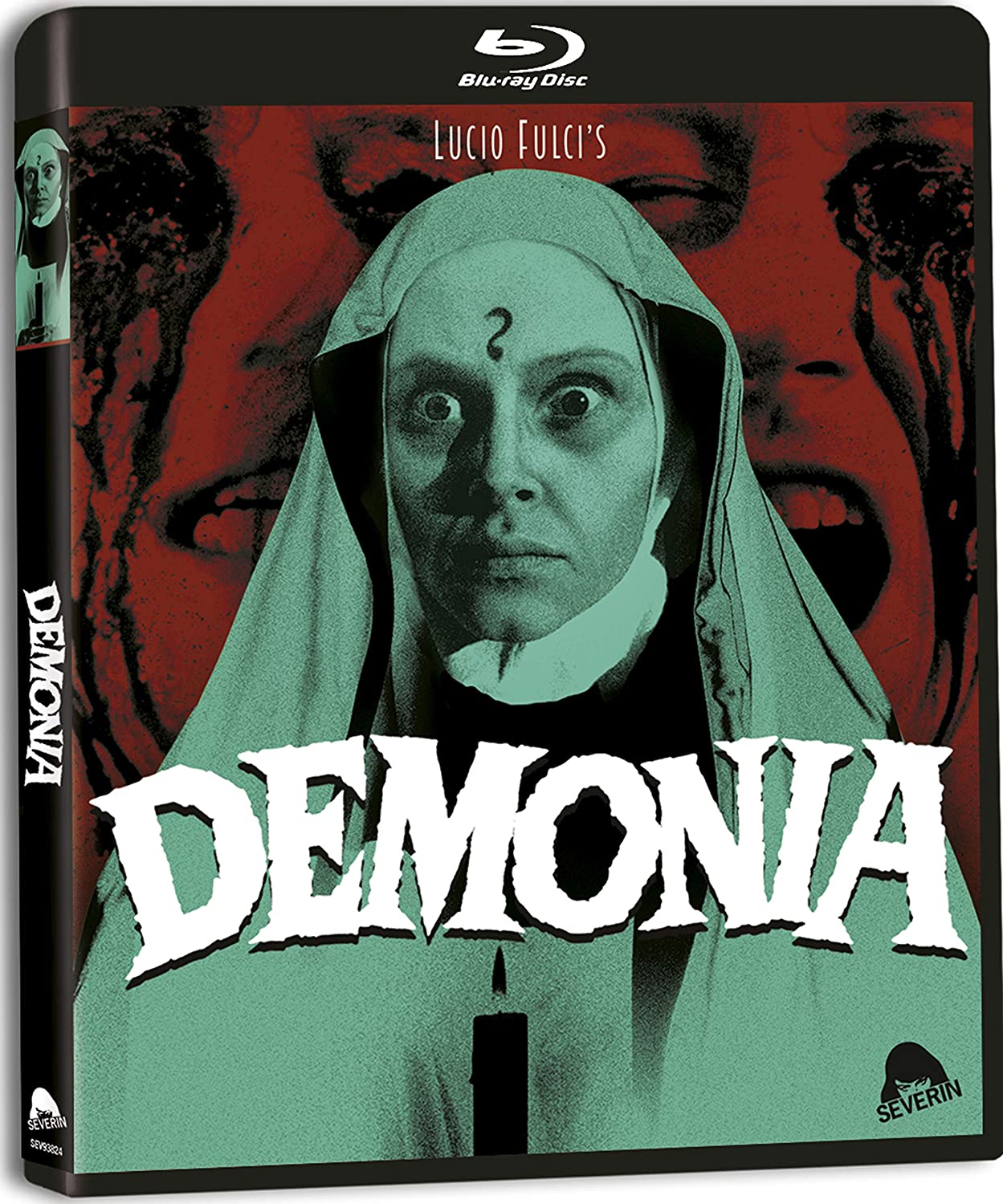 Lucio Fulci’s Demonia came late in his career as one of his last directed films. Part Gothic horror film, infused with a bit of giallo detective-work, the movie sounds on paper like a solid offering from the maestro. But Demonia suffers from a lot of the same elements that plague Fulci’s later output: nonsensical plot elements, poor editing, muddled direction, cheap effects. Its storyline revolves around Liza (Meg Register), part of an archaelogist team in Sicily working on a dig; she uncovers the five crucified bodies of nuns in a decrepit church and eventually realizes that these devil-worshipping ladies from the 1400s are haunting the town’s occupants.

Demonia features a pretty solid atmosphere thanks to its Gothic setting and Fulci’s focus on the Sicilian townspeople who really oppose the fact that Liza’s meddling in the backstory behind the nuns’ deaths. Most of this is due to the creepy abbey setting, utilizing the naturally dilapidated structure to enhance the eeriness. Fulci also intentionally shoots everything in a haze with diffuse lighting, adding to the surreal elements of the plot and the literal dream sequences that Liza finds herself in.

But Demonia‘s plot is extremely messy, and too often the film meanders without a clear destination. There are too many dream sequences that go nowhere, too many campfire songs that add little to the plot; even Brett Halsey doesn’t get much to do besides tell Liza how annoying she’s being about these dead nuns. In fact, the end of the film really loses sight of Liza entirely after her possession, instead morphing into a detective story with Fulci himself taking the lead as Interpol inspector Carter.

Also of note are the special effects of varying quality, some impressive (a tongue-nailing scene) to poor (a cat eye-gouging). Demonia runs the gamut here with gore effects spread throughout the film, but most of them look fairly cheap with visible seams. They show the depth of Fulci’s ideas, just without proper execution.

Demonia may very well be one of Fulci’s weakest offerings. Bland and poorly-paced, its Gothic facades and nunsploitation elements lack the ingenuity of Fulci’s better, earlier body of work. Ultimately it is a forgettable experience with a small number of highlights, one of which is Fulci in an acting role that’s slightly smaller than his A Cat in the Brain turn.

Severin Films has given Demonia its first Blu-ray release with a new 4K transfer from the original film negative. The results are markedly better than past home releases, with strong picture detail that features a medium-heavy grain scale and vibrant color timing. Definition is strong despite the film’s hazy cast, which has a tendency to give the impression of softness. Darker scenes are definitely murky with heavier grain obstruction, but overall these are limited and Demonia looks quite impressive otherwise.

Two audio tracks are provided, a DTS-HD MA 2.0 mono English and Italian option. Both sound good with no issues with pops, hiss, or other noise, and either are good choices for first-time viewers, with the Italian having a couple of differences in dialogue. English subtitles are included to be used with the Italian track, and there’s also an SDH option for the English-language track.

Extra features add a number of new options for collectors. A new audio commentary with Stephen Thrower adds a lot of value as he provides context within the film, shooting location information, and even tidbits from past interviews he has completed with crew who worked on the film. A new 30 minute Skype interview with uncredited co-writer Antonio Tentori goes into detail about work on the film and its limitations, including running out of money during production and the problems with editing.

Also included is a new 14 minute interview with camera operator Sandra Grossi, who goes into his background in film and talks about shooting the movie with Fulci, who often knew exactly what he wanted including the diffuse lighting and zooms. Finally, a vintage interview with Lucio Fulci on the set of Demonia when shooting the quartering sequence is included, at a brief 4 minutes. There’s also a theatrical trailer to round things out.

While Demonia as a film may disappoint even some fans of Fulci, Severin’s release certainly does not. It sports a great transfer and a host of extra features that may help viewers appreciate some of the context behind the problematic production of the movie. If you have even a passing interest in Demonia, this is worth owning. 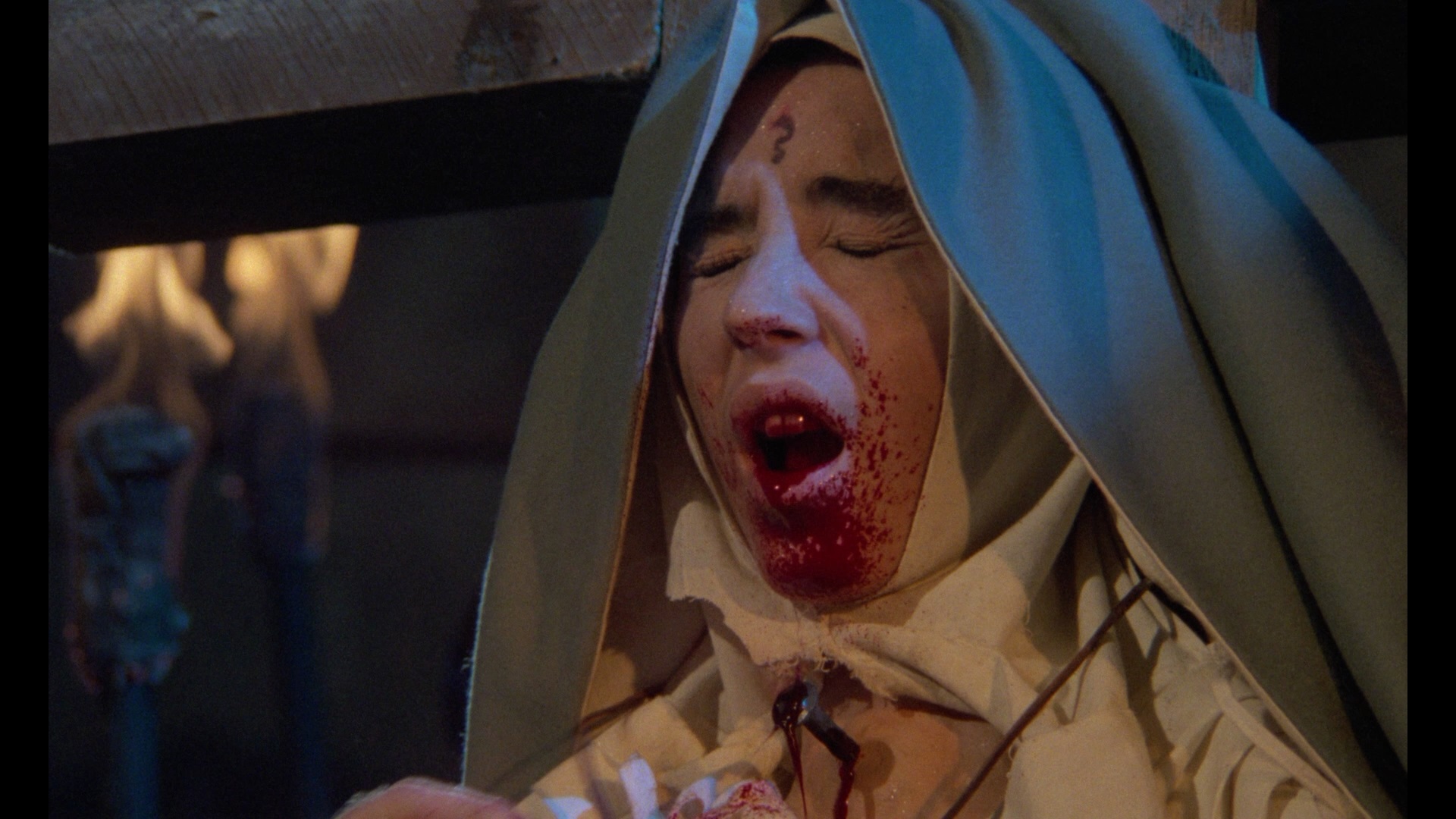 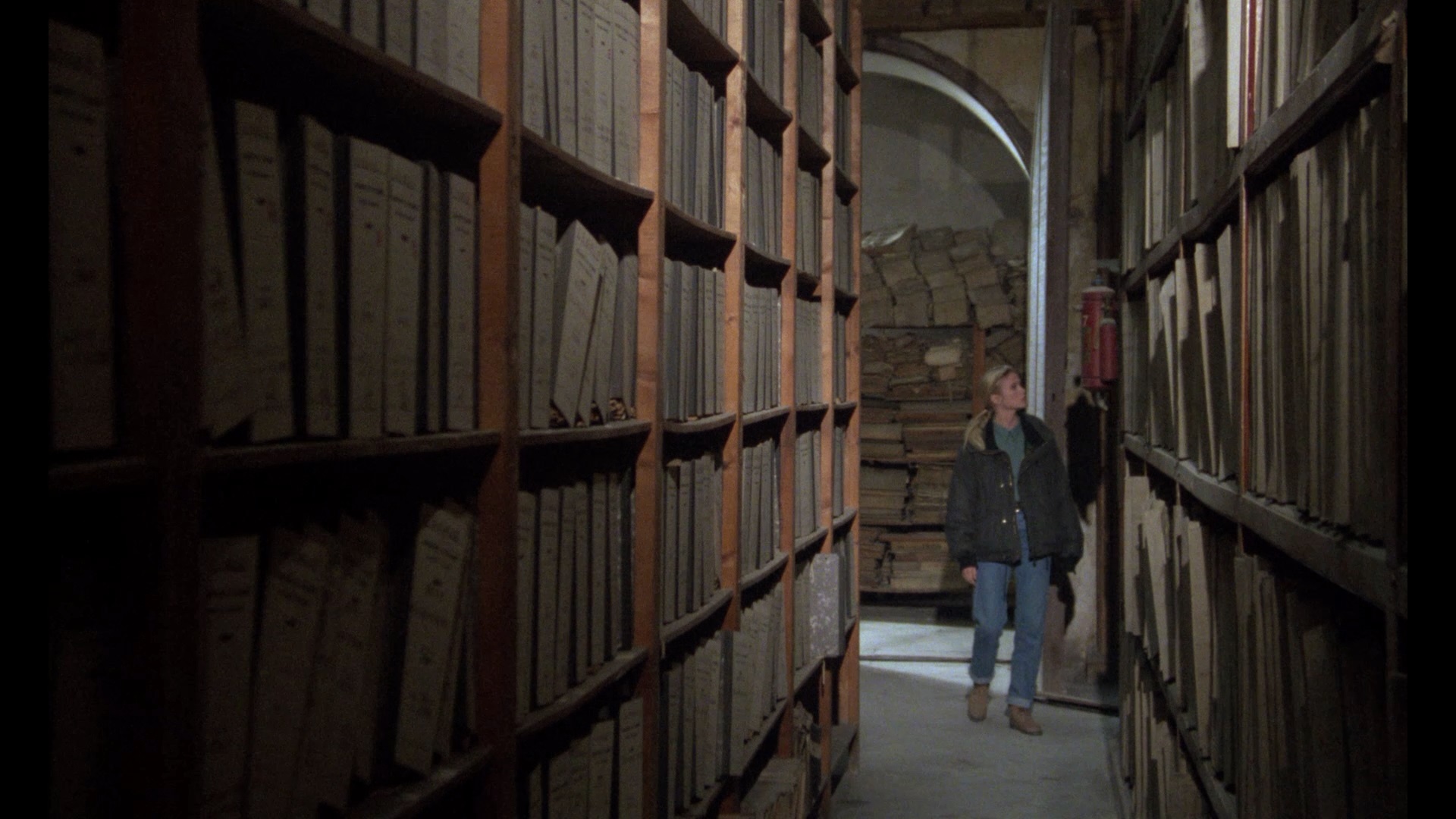 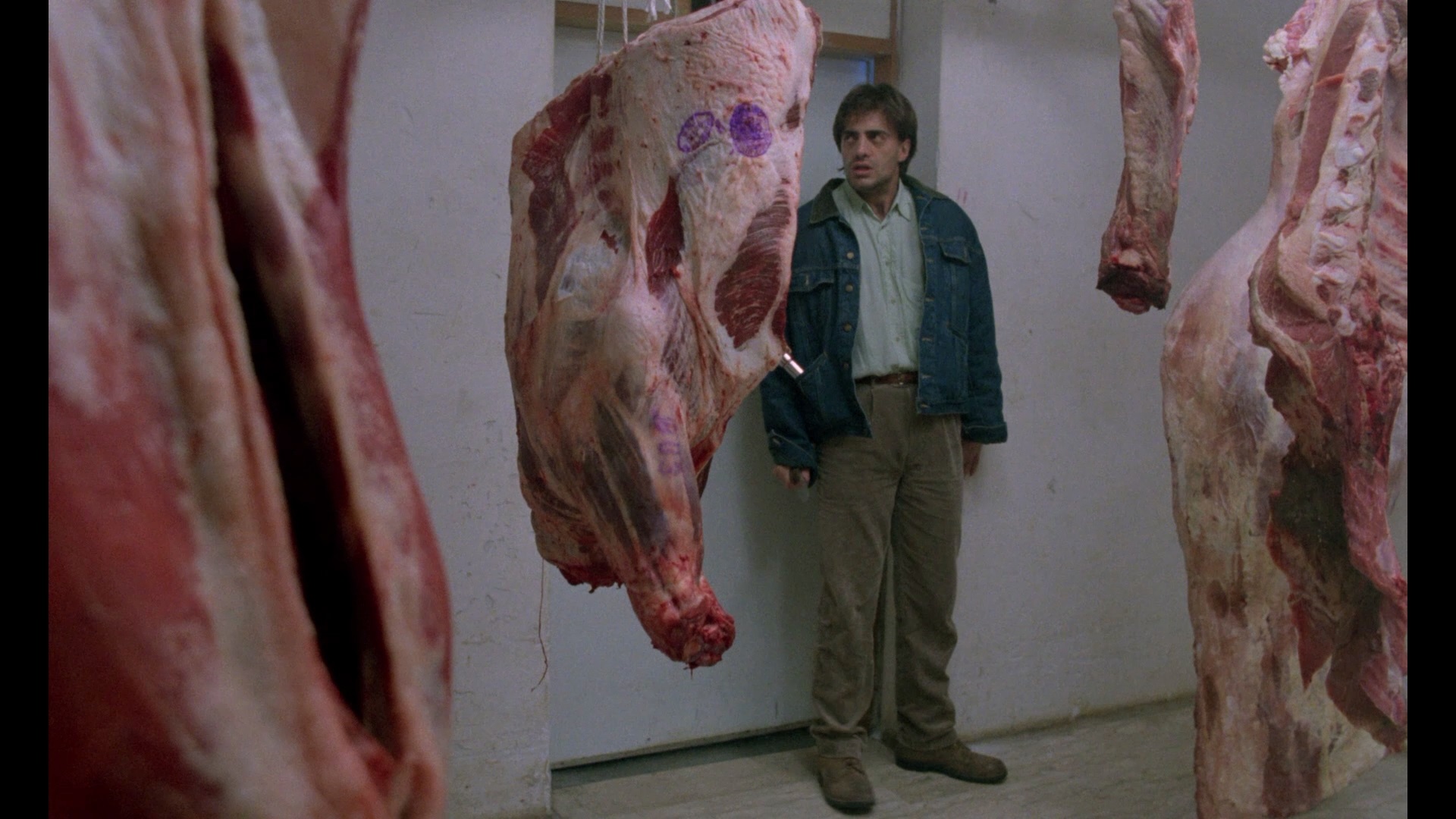 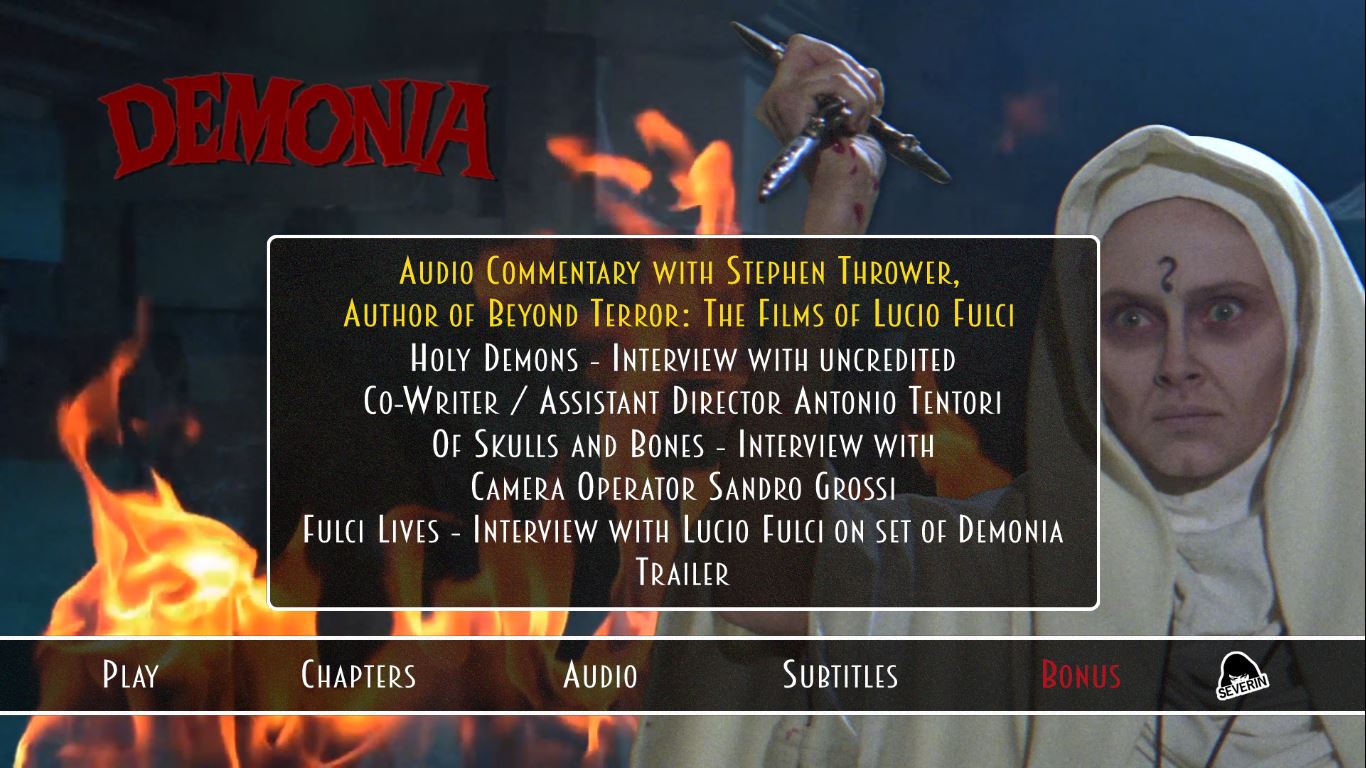 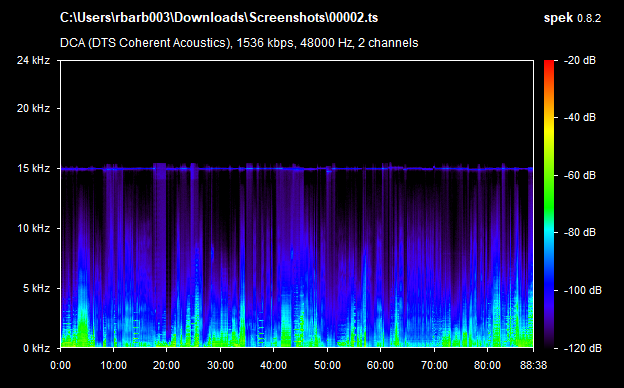 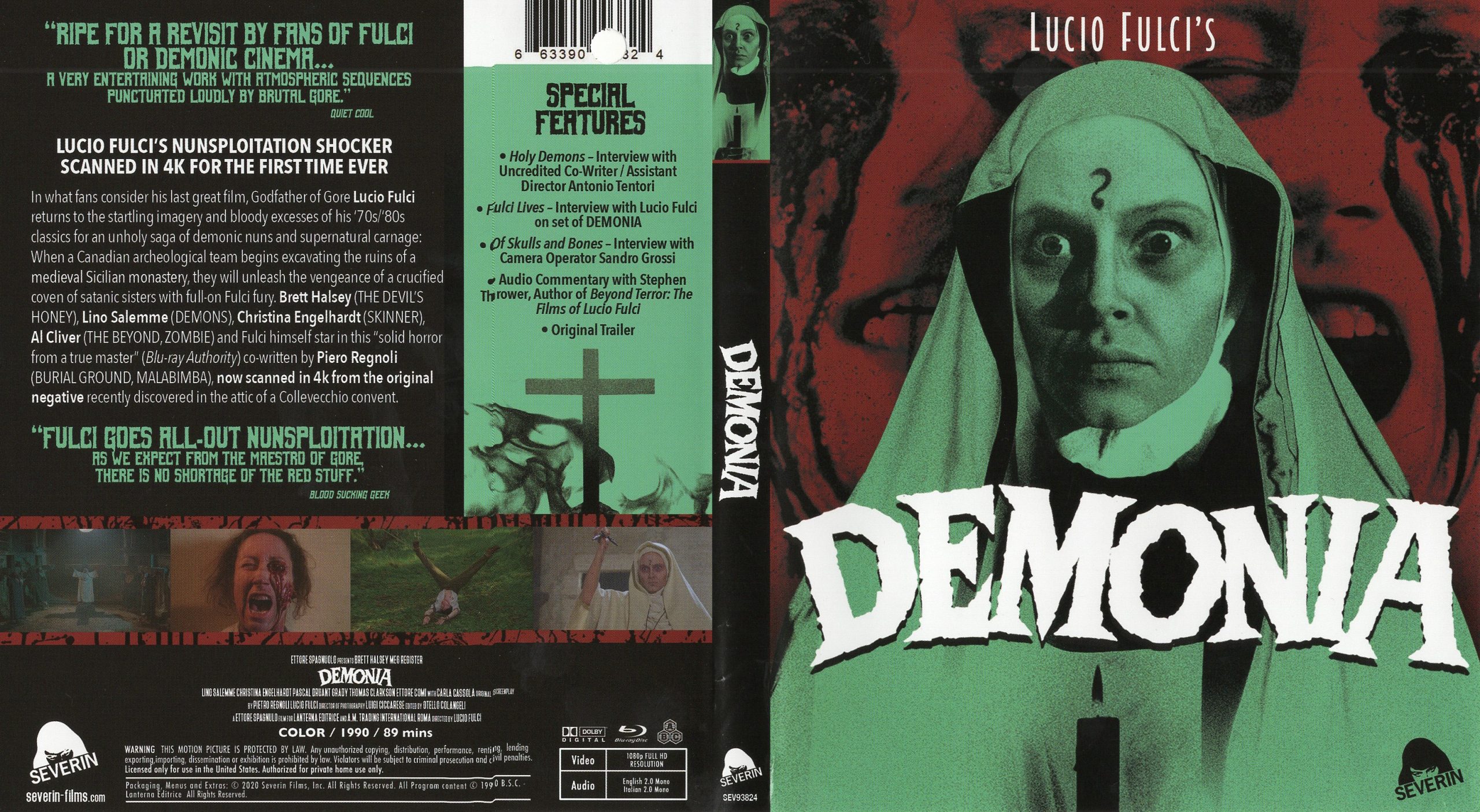 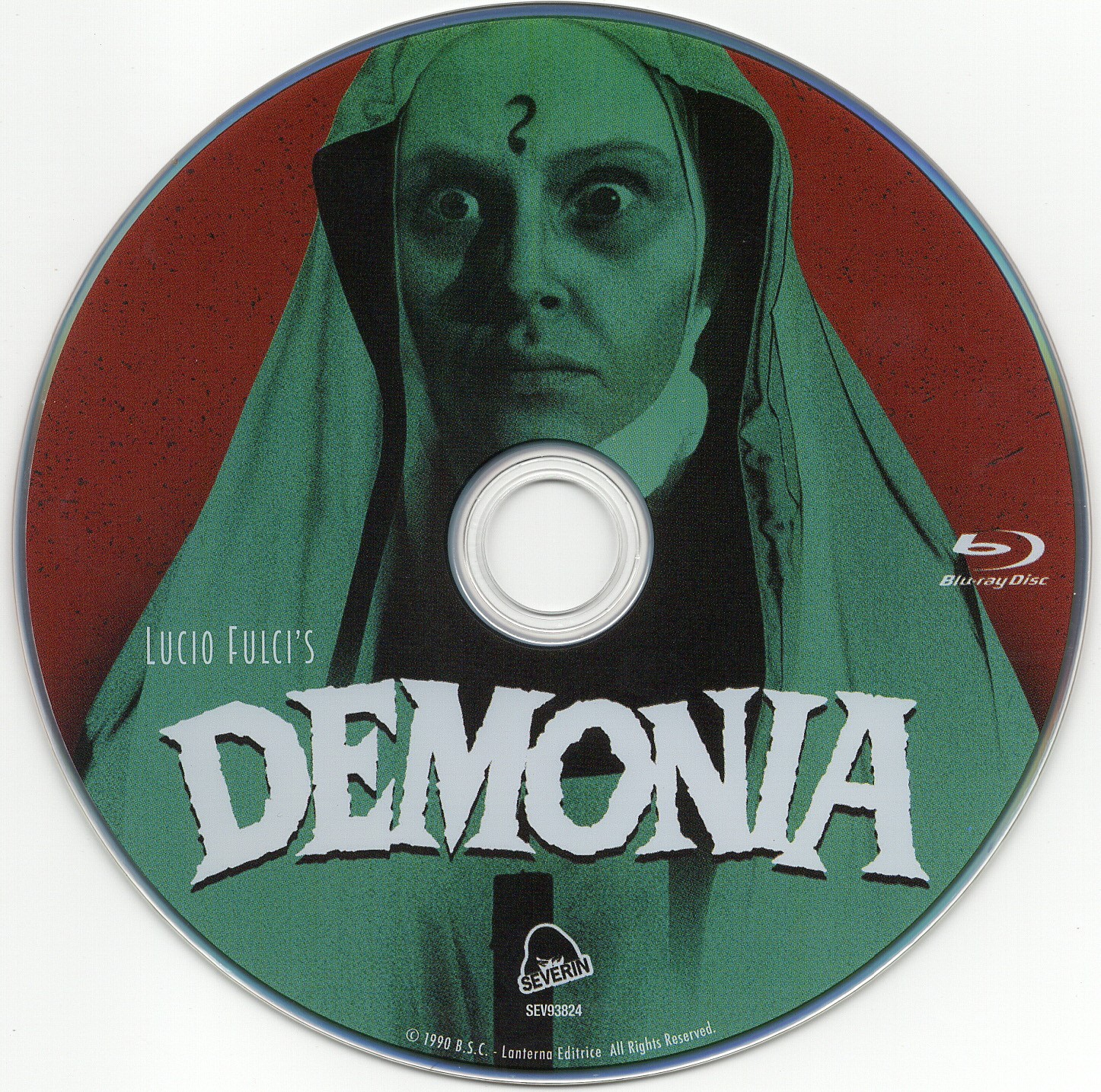