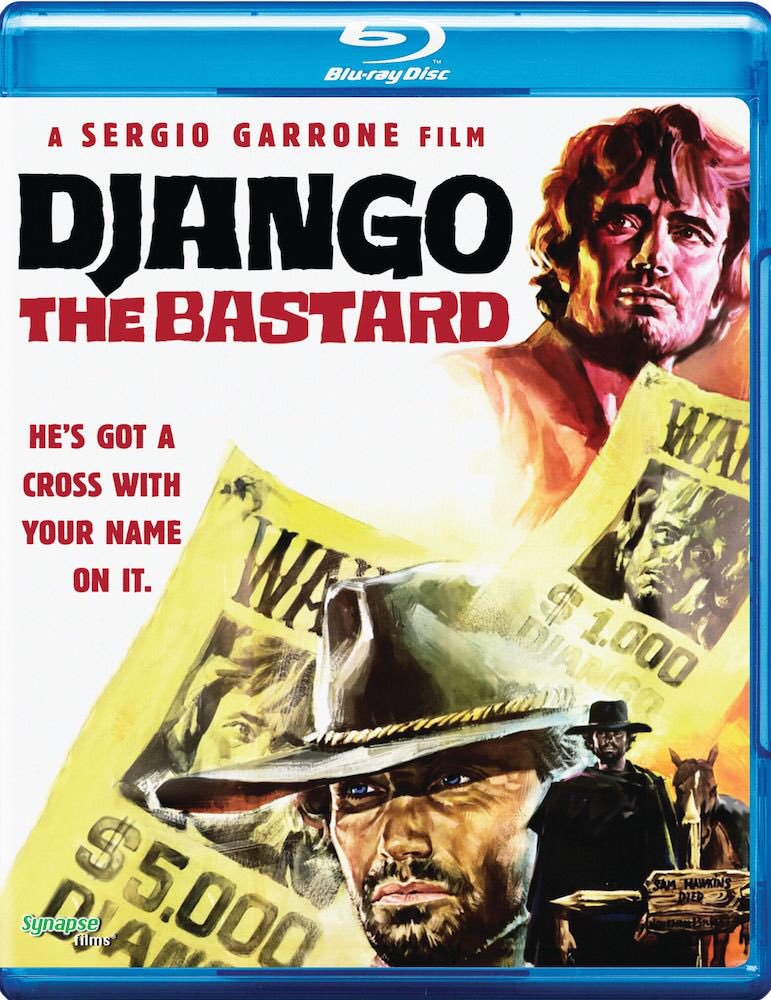 In 1969, writer/director Sergio Garrone released his version of a Django film called Django il bastardo, or Django the Bastard in English. It sported a character named Django (Anthony Steffen) but had little to do with any of the previous Django films before it; instead, coming at the latter part of the spaghetti western craze, it operated on preexisting storylines involving revenge and a stranger blowing into town to cause mischief to his enemies. But it also added a unique element to spaghetti western tales: a supernatural, and what some critics deem “Gothic,” atmosphere, with Django taking on the abilities of a ghostly apparition who comes to do his bidding and then disappears. Later films would adopt a similar approach, but Django the Bastard was one of the first to try it. Later on, Django the Bastard would be released with an English dub as The Stranger’s Gundown, albeit with a slightly different sequencing. This Synapse Films release sports the Django the Bastard title but basically presents the English version The Stranger’s Gundown, with the original English title card.

The film follows Django, a Confederate soldier whose troop was massacred after their leaders became traitors and joined the Union. With Django presumed dead, these traitors including Major Rod Murdok (Paolo Gozlino) and his brother Luke (Luciano Rossi) have taken to traveling through cities looking for easy money and causing a ruckus along the way. But Django catches up to all of them in Desert City, and after getting in close with Luke’s Wife Alida (Rada Rassimov), makes an effort to snuff them out one by one.

All of the tropes of usual spaghetti westerns are here: Django is a mysterious stranger who no one knows, with a gruff persona that is an attempt to mimic both Clint Eastwood’s Man with No Name and Franco Nero’s own Django representation. He’s a good stand-in for those guys but clearly on the less effective side. And like most spaghetti western plots, the sole theme here is revenge, with Django looking to kill those who did him and his crew wrong (never mind we’re talking about a Confederate soldier who ended up losing the war). This is pretty much bargain-bin generic plotting, and ultimately Django the Bastard is far too slow for its own good getting to the action, even including a nonsensical substory about a widow’s herd of cattle before anything of substance occurs.

The Gothic nature of this film is slightly present, though critical reception seems to oversell that “horror” dynamic of the film quite a bit. Certainly Django has some supernatural abilities including an uncanny ability to escape into the night or appear in fog and a Spider-sense that allows him to pinpoint all threats before they can even open fire. However, none of these scenes are all that atmospheric besides some foglighting, and it’s one of the only unique things about Django the Bastard. The other would be Django’s penchant for putting his enemies’ crosses in the town square to predate their death.

Unfortunately, Django the Bastard is exceptionally plodding and it never tightens up its pace too much, especially its final cat-and-mouse sequence that seems to go on forever. The film could have been cut down significantly from its 100 minute mark and still function with its narrow plotting, and too few gun shootouts make this a drag. This one will be for only those hardcore fans of spaghetti westerns, since it’s certainly not a high point for Garrone or even Steffen who went on to have a pretty good career in westerns, gialli, and poliziotteschi.

Django the Bastard comes to Blu-ray thanks to Synapse Films, who have given this film a new 2k restoration from the US version’s 35mm negative. The results are quite grand, with the film cleaned up nicely and sporting a lot of depth and detail despite a heavier grain presence. One will note the presence of some ruddier skin tones and warm color palette that definitely adheres to the trademark spaghetti western look, and bright colors of red, green, and blue retain their beautiful hues. Overall, this is a great scan for the film which has only ever had mediocre DVD releases.

Audio is a DTS-HD MA 2.0 mono track that sounds about what you’d expect from a late ’60s English dub – a bit muffled and scratchy in parts but overall fairly clear in terms of dialogue, with the score being a large draw of the film. Interestingly, Synapse Films did not include the Italian version of the film or an Italian soundtrack (which makes sense due to some shifted scenes in the two versions); it seems like a missed opportunity to release both versions, but alas, the English is the only option you get. Subtitles are also included.

Extra features are extremely limited; you get one new audio commentary with Troy Howarth, who always puts on a good show. Other than that, nothing else to note. Unfortunately many of the primary players have passed on, so it makes sense that there’s not too much to offer for new interviews.

Django the Bastard is one of the poorer spaghetti westerns I’ve seen, with a plot that doesn’t stand out too much from its predecessors; it’s also too slow. Synapse Films gives a great new 2k scan for this release and gets a Troy Howarth commentary to add a little more value to the release.

Django the Bastard is a generic and tedious spaghetti western, but Synapse Films gives it a great Blu-ray release regardless with a nice 2k scan and an audio commentary.
Film
Blu-ray
Reader Rating0 Votes
3
Buy
Amazon
Hosting screenshots is expensive. If you want to see more galleries, consider donating!