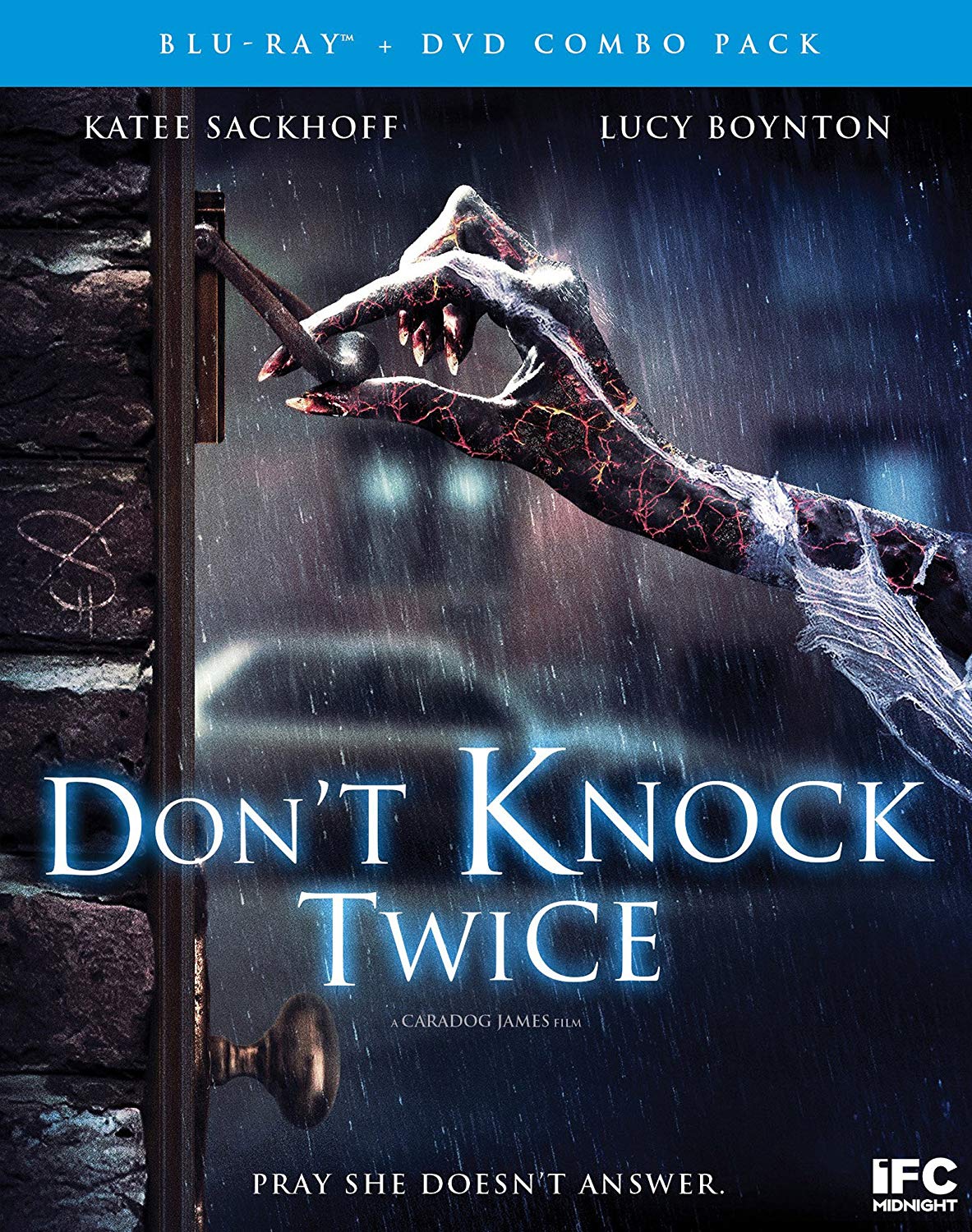 DON’T KNOCK TWICE Review (Scream Factory/IFC Midnight Blu-Ray)
Verdict
Don't Knock Twice is often atmospheric and spooky, with a gimmicky plot about a child-eating witch. It suffers from a confusing finale, but ultimately this horror film has strong matronly themes and some good scares. The Blu-Ray/DVD is good, with a making-of featurette as an extra.
Film
7
Special Features/Quality/Packaging
7
Reader Rating0 Votes
0
The Good
Tense and atmospheric at times
Sackhoff and Boynton work well together
Making-of featurette as an extra
The Bad
Film loses direction in its final moments
Overall lack of extras
7
Good
Buy
Amazon

Kudos to director Caradog James for getting to Don’t Knock Twice‘s gimmick early and rarely bothering with it again. While most supernatural horror films have, in recent years, become a game of figuring out what kind of silly plot device will generate the most buzz (Lights Out, Silent House, Hush), Don’t Knock Twice features a refreshingly simple element that, despite being a pervasive part of the film, doesn’t wear out its welcome. Mark Huckerby and Nick Ostler’s script (also the duo behind 2015’s Howl) imitates the urban legends of Candyman and Bloody Mary, but it’s more a story about childhood trauma and mother-daughter relationships kept inside a paranormal shell.

The film stars Katee Sackhoff as Jess, a sculptor who was once addicted to drugs and gave her daughter Chloe (Lucy Boynton) up for adoption; nine years later, she’s clean again and ready to bring Chloe back into her life. But Chloe’s not the forgiving type and she’s hesitant to accept any help from Jess – that is until she accidentally summons an evil demon after knocking twice on a deserted house where a witch used to live.

Don’t Knock Twice is moody and atmospheric thanks to its constant drab lighting and excellently spooky soundtrack, but it’s easy to imagine some viewers feeling occultic overload after the constant smattering of Blumhouse ghost movies over the years. In truth, the film’s opening moments involving the witch house, the knocking, and the first ghoulish attack don’t do much to dispel the feeling that Don’t Knock Twice is yet another paint-by-numbers ghost film in a genre flooded with them.

However, once the film settles into its groove – mainly following Chloe as she moves into Jess’ massive house as a form of protection – things get a lot better. James has the chance to work on atmosphere rather than generic scares, often allowing scenes to play out at length as hauntings begin to plague both Jess and Chloe. James’ demonic creature is, while Ringu- and Slender Man-esque, an imposing figure, and the film’s tension is heightened by the presence of an old woman named Mary (Ania Marson) who was blamed for witchcraft after a detective named Boardman (Nick Moran) blamed her for the disappearance of children in the area. There are numerous jump scares, but there’s also the occasional suspenseful slow burn with creative setpieces.

Sackhoff and Boynton are more interesting than the ghosts themselves, though, and James does a fairly good job of piecing together a story about a mother and daughter bonding over a traumatic incident. Don’t Knock Twice allows their relationship room to grow, at first starting on rocky territory and then slowly forcing Jess and Chloe  together. While there’s really no question about the realness of the hauntings, the film does at least put some doubt in the viewer’s head about Jess’ intentions.

However, Huckerby and Ostler’s script doesn’t really stick the landing, becoming overly convoluted in its attempts to make Don’t Knock Twice more twisty and complex than it needs to be. It’s difficult to discuss the conclusion without giving away the plot; however, the rushed nature of these moments in the last thirty minutes make Don’t Knock Twice‘s finale feel underdeveloped at best and, at worst, nonsensical.

Still, the lead-up is good enough to warrant praise, and while most viewers won’t find anything extraordinarily memorable about Don’t Knock Twice, it’s a good attempt at supernatural horror. While James takes very little risks throughout, the film has solid atmosphere aided by a cool soundtrack and some great performances from Sackhoff and Boynton. This isn’t going to redefine the subgenre, but it’s hard to knock this hearty attempt.

Scream Factory and IFC Midnight have given Don’t Knock Twice a Blu-Ray/DVD combo pack, and the image looks good in HD with a 2.40:1 aspect ration. The movie is intentionally very dark, and some of these scenes are difficult to make out; however, the rest of the film looks crisp and clean, with no real issues. The film gets two audio tracks – a 5.1 DTS and a 2.0. Both sound quite good, although I do think that the 5.1 adds some better atmosphere thanks to some of the ambient noise from the satellite speakers. English and Spanish subtitles are also included.

Special features are – as is often the case with these IFC releases – limited, but there is a 13-minute making-of featurette and the film trailer, as well as IFC Midnight trailers included before the film menu. Still, it’s a nice to have something extra included on the disc, especially for fans of this dark film.