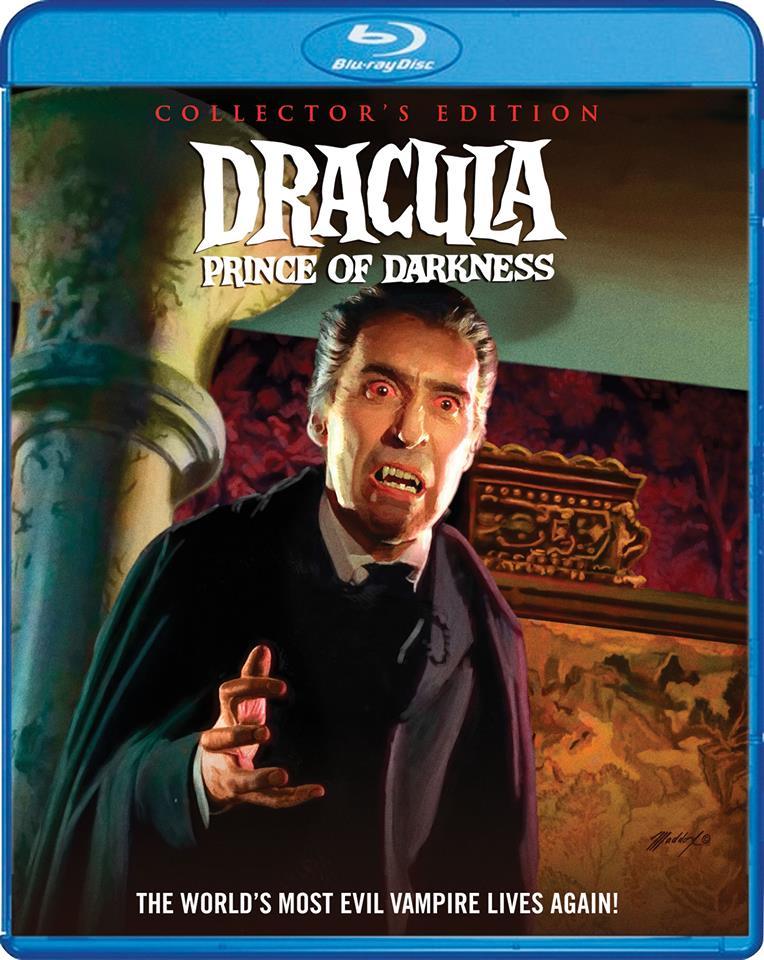 Scream Factory have assembled both the US and UK version of Dracula: Prince of Darkness, which alone makes this worth a look. But adding extras, this is definitely worth your time.
Film
Blu-ray
Reader Rating1 Vote
4.4

Terence Fisher’s first Hammer Dracula film, Horror of Dracula, released in 1958 to some pretty solid fanfare thanks to Christopher Lee’s chilling representation of the vampire. But the sequel, Dracula: Prince of Darkness, would take eight years to come to fruition. In that time, Hammer released a huge number of horror films that ramped up the violence, nudity, and suspense of monster horror, including stories involving Frankenstein, the Mummy, and even other vampires (The Kiss of the Vampire). By 1966, Fisher’s Dracula: Prince of Darkness needed to improve upon the classic tension of Horror of Dracula, and he does just that by preparing a bloodbath for his unsuspecting victims and by alternating settings to incorporate both Dracula’s castle and a monastery.

The film picks up after the events of Horror of Dracula, giving the viewer a quick look at the conclusion of Fisher’s first installment when Dracula (Lee) is vanquished to dust with his infamy ended. Ten years later, a group of hapless individuals, including Charles (Francis Matthews) and his wife Diana (Suzan Farmer) and his brother Alan (Charles Tingwell) and wife Helen (Barbara Shelley), are traveling the countryside and find themselves invited into Dracula’s castle by his fantastic servant Klove (Philip Latham), who has apparently been lurking in this castle all by himself just waiting for victims to come around. Soon, Diana is the target of Dracula’s obsession, and Charles and Diana enlist the help of Father Sandor (Andrew Keir) to hopefully imprison Dracula once and for all.

The first thing that most viewers will notice is the derivative nature of Dracula: Prince of Darkness, since Fisher basically hits every facet of Hammer horror. There’s a moody castle where victims are sequestered; there’s the atmospheric Gothic candlelight, Dracula’s usual rise from the coffin, many of the folkloric weaknesses of the vampire used to great effect. The film’s story doesn’t have much of a unique take on Dracula, but what it does do is assemble all of the best elements of the creepier Hammer hits without much of the pap. The plot, though, languid, never suffers from too slow of pacing, and much of the tension is generated in the first forty minutes by the cast meeting Klove. In fact, Latham has almost as much screentime as Lee as Dracula, and the character Klove is perhaps more menacing because the viewer knows little about him.

What truly rejuvenates Dracula: Prince of Darkness, though, is its gruesome Dracula resurrection about halfway through the film. Done with some surprisingly effective SFX, the lengthy scene mixes fog and clever layering to show how a pile of hot frothy blood forms into a vampiric form. It’s one of Fisher’s best moments, gratuitous and also artistic. The seedier elements of Hammer have been toned down here as Fisher very loosely focuses on the eroticism of bloodsucking and some lesbian fantasy; still, Shelley is a treat playing Helen, always pushed aside by Dracula in favor of Diana.

While the late shift from castle to monastery does lose some of the film’s suspense, getting out of Dracula’s drafty castle allows Fisher to explore some different settings, bringing Keir’s character Father Sandor in as a pseudo-Van Helsing. It also leads to another one of Dracula: Prince of Darkness‘ best set pieces as Charles and Dracula battle it out on a frozen pond before the vampire sinks into the cold murky depths. There’s ambition to Fisher’s direction as he transitions between outdoor scenes and the dimly-lit, shadowed hallways of the castle; it adds nice variety to the story that keeps things moving smoothly.

Dracula: Prince of Darkness may not be as memorable as Horror of Dracula, but it certainly has excellent qualities that make it one of the best Hammer offerings of the era. Despite a few missteps, the film has just the right pairing of tension and pulp, a step in a more sordid direction for the titular monster.

Scream Factory brings Dracula: Prince of Darkness to Blu-ray with a new 4k scan of the US version’s interpositive. In a special thanks extra on the disc, Scream Factory explains that they intended to use the original camera negative but due to the quality of that OCN, they were forced to go a step down for the interpositive. Ultimately, most viewers will just be thankful to finally have a release with both the US and UK versions of the film; while there are very few differences between them, the UK print has already been available.

The US scan is certainly not perfect, and a quick comparison of the included UK scan shows the US version to have a much more filmic quality. There is a heavy grain presence throughout, and there is the occasional soft frame here and there. More notable, though, is the presence of damage throughout the scan – there is quite a bit of it, not reserved to cuts and specks but also a few instances of wobble. The US version also has a much darker contrast to it, which seems to be the intended experience for this film due to the enhanced presence of shadows in the castle. This darker color scheme is much preferred to the brighter and less visually arresting tint of the UK version included on this disc.

The UK scan looks to be the same version done by Studio Canal, and there are some instances of DNR applied to it. Overall, the UK version is much smoother in all aspects – grain is not visible, and there’s no damage, but skin tones can look a bit too smeared. The aforementioned brighter color timing also provides a surprisingly different viewing experience, and in this viewer’s opinion, it lessens the impact of the atmosphere. While the UK version might be cleaner, the US version seems to be the more authentic of the two.

The audio track here sounds fairly good, although the US version does tend to have somewhat muffled dialogue. English subtitles are also included.

For extras, Scream Factory has provided two new audio commentaries. One features Troy Howarth alone, who goes into lots of detail about specific scenes, characters, actors, and context of the film. As always, he’s well-researched. The more conversational commentary is with Constantine Nasr and Steve Haberman, who both truly love Hammer horror and discuss facets of the film and comment on running scenes. Also included is an old commentary with Christopher Lee, Suzan Farmer, Francis Matthews, and Barbara Shelley, all sounding like they’re having a lot of fun.

This Blu-ray also collects some previously released features like a Studio Canal-produced making of featurette that runs about a half hour and an old World of Hammer episode on Dracula. Super 8mm footage, theatrical trailers, a still gallery, and the previously mentioned special thanks feature round out the disc. This also gets alternative cover artwork.

This is a great release from Scream Factory, who have assembled the best of both worlds for audiences. Those who prefer more vintage elements will want to check out the US version of the film, while those who like a clean and smooth video will want to utilize the UK version. Having them both, though, completes this package, and adding on new commentaries is just icing (or blood) on the cake.