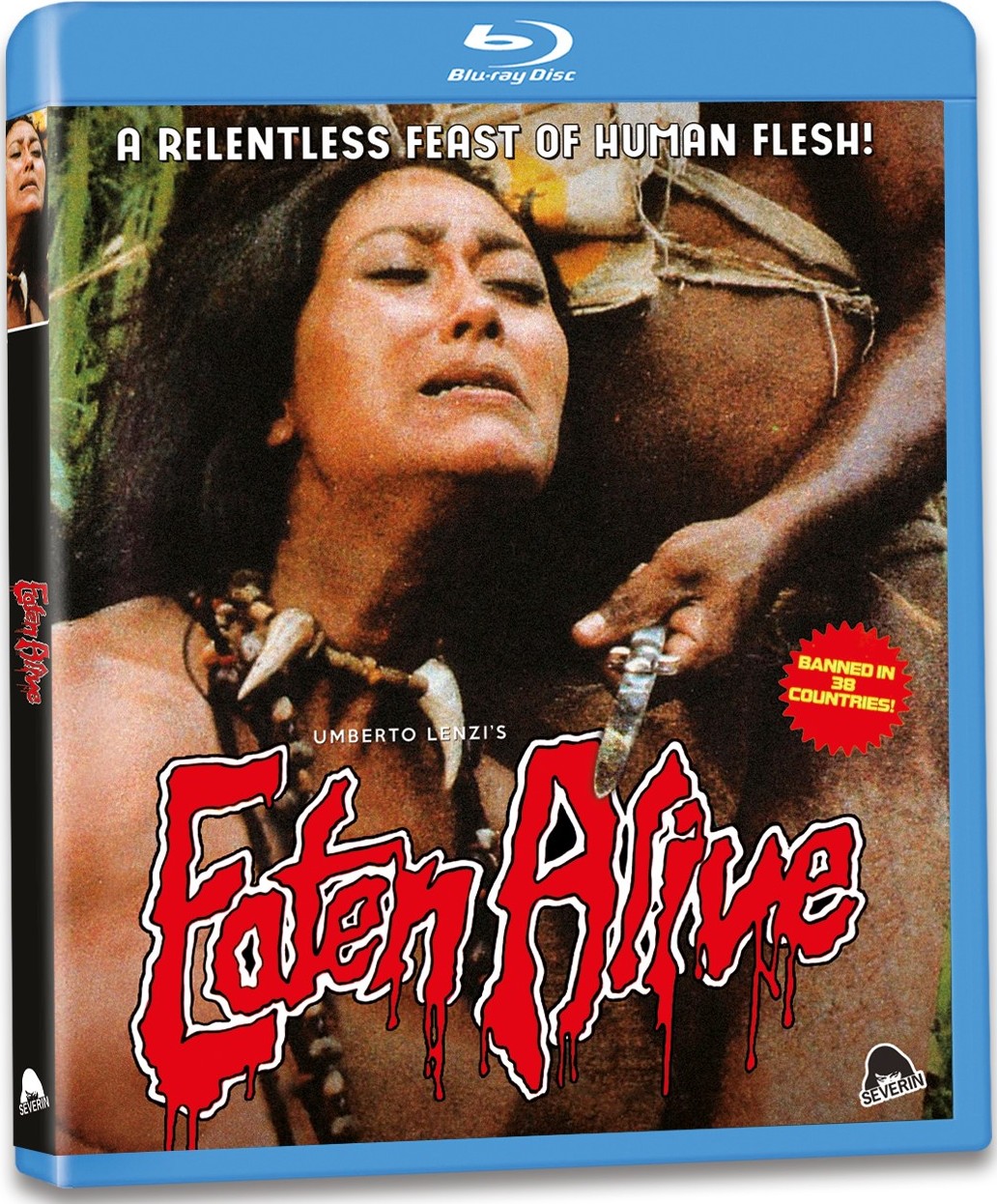 Eaten Alive! Blu-ray Review (Severin Films)
While Eaten Alive! is a flawed and potentially unworthy example of the cannibal genre, Severin Films has done a great job on this Blu-ray release regardless. The HD transfer is probably the best the film can get, and they've assembled a number of extras worthy of a watch.
Film
Blu-ray
Reader Rating0 Votes
3.6

Sheila is on the search for her missing sister and decides to enlist Mark’s help after she travels to the jungles of New Guinea. Once there, they encounter a weird cult group led by Jonas, who has drugged them into wanting to stay in the area surrounded by dangerous animals, swamp – and, oh yeah, native cannibals. So begins their attempt to get out with Diana and Mowara without being… EATEN ALIVE!

The early ’80s were a good time for gorehounds thanks to Italian cannibal cinema. While cannibal films started making their debuts in the 1970s, it wasn’t until 1980 when the first wave descended and became what we know today as “popular,” or perhaps that contextual cult status was aided by the amount of countries that decided to ban these films. Eaten Alive!, Umberto Lenzi’s addition to the cannibal genre, was one of those films that achieved both cult worship and cultural criticism; like Cannibal Holocaust, released only a month prior, Lenzi’s film received condemnation for its use of real animal killings, graphic gore, and rape content. But Eaten Alive! is a bit more artistic than those criticisms would suggest, obviously influenced by real world atrocity – specifically, the Jim Jones cult.

The film eschews the normal mondo documentary style of cannibal films and utilizes a more story-driven plot, with main character Sheila (Janet Agren) setting out to find her sister Diana (Paola Senatore) after she gets caught up with a cult led by Jonas (Ivan Rassimov), a clear stand-in for Jim Jones and his Peoples Temple cult. Lenzi follows Sheila’s adventure into the jungles, documenting the journey to the village as she and her escort Mark (Robert Kerman, a cannibal-film expert) brave dangerous crocodile-infested waters and elude native cannibals at every turn.

Eaten Alive! has a wide-ranging focus, including the aforementioned cult and cannibals and a strange city-set subplot about assassins. It’s also often disjointed thanks to Lenzi’s use of other films’ footage including The Man from Deep River and Jungle Holocaust; many of the animal shots were recycled from these films, as well as some of the death sequences, and that leads to humorous moments where the footage doesn’t seem to fit well within context. One example is a crocodile attack on a river, with the characters reacting very little to this event – it’s a strange and misplaced scene, and it adds to Eaten Alive!‘s  dream-like narrative.

Eaten Alive!, though, doesn’t have the overwhelming amount of explicit animal cruelty or sadism of Cannibal Holocaust, and it certainly doesn’t have the realism with its gore effects. Some of the cannibal attacks are visceral, but it’s hard to give Lenzi credit for that because of the reused footage. The film suffers from its banality most of all, and it’s actually quite surprising that it has kept its nasty status for so long considering it is less gratuitous than most other cannibal films besides a late rape sequence. Unfortunately, a lot of the movie’s cinematic contributions seem less impressive now; besides the topical cult theme, there’s not much to take away from this work. But thanks to Severin, we now have a culturally reviled work easily accessible on Blu-ray for others to judge its merits, for good or ill.

Curiously, Eaten Alive! isn’t as graphic as its “banned” sticker might suggest. There are a few good gore scenes that often involve cutting off women’s breasts and eating them, but a lot of the scenes have been taken from other cannibal films. There is some brutal animal violence like a crocodile killing, a snake/mongoose fight, and a snake devouring a monkey, but for the most part these seem less cruel and more like documentary-esque nature scenes.

Note: this is a review of the standard Blu-ray release, not the limited edition with CD. Imagine these features and add 10% to final score.

Severin Films’ Blu-ray of Eaten Alive! features a new HD scan of the film; however, the information doesn’t really specify the source. One thing that can be determined, however, is that the source was in rough condition, or at least not preserved to the fullest degree. The HD transfer looks good, though it does display some heavy grain especially in darker scenes; there’s also quite a bit of damage including the presence of lines and various debris throughout the film. Still, this release presents the film in an uncensored HD format for the first time and certainly looks cleaner and crisper than previous versions, and it is potentially the best it can get without some heavy digital manipulation.

Severin gives viewers three different audio tracks, two of which will probably be the most viable options. All of them are DTS-HD Master Audio 2.0, in either English, Italian, or Spanish. The English and Italian tracks are the best; while both of them are imperfect dubbing, the sound quality is quite good and either are acceptable ways to view the film, and Severin has provided both an English language subtitle and an English subtitle for the Italian dub. The Spanish track suffers from some muffled audio, omnipresent throughout the film, and should be used as a last resort.

Severin has compiled a mix of new and old features for this release. The package comes in a black Blu-ray case which I like quite a bit; however, the included reversible cover artwork cannot be seen through the package, which is somewhat unfortunate and may not even be apparent to some consumers. If you got the limited edition, then there’s also an excellent slipcover along with a CD soundtrack.

Also included is a feature length documentary on Me Me Lai which runs about an hour and 20 minutes. This has been previously available but is still an appropriate inclusion on this disc besides branching out extensively from Eaten Alive! Also available are archive interviews with Ivan Rassimov and Robert Kerman, as well as a 2013 Q&A session with Umberto Lenzi that spans about 30 minutes.

As a full release, Eaten Alive! is a great collection for those fans of cannibal horror, and if you’ve been collecting other films of this ilk, this will definitely be a must-have for your film portfolio. However, Eaten Alive! as a film is not for everyone, so unwary viewers might want to do some research on the movie first.