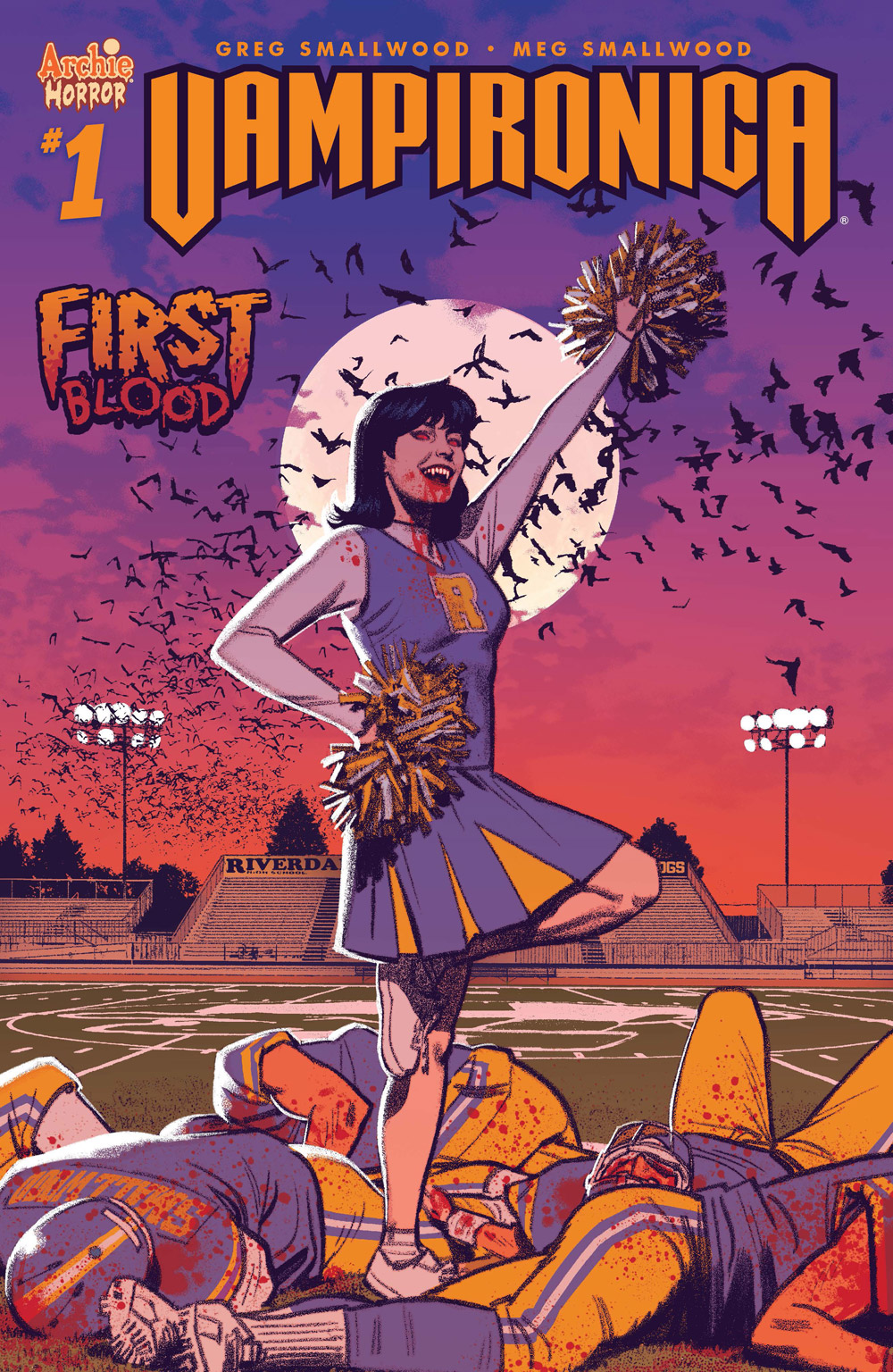 VAMPIRONICA #1 Review (Archie Comics)
Verdict
Vampironica #1 has some interesting ideas and some obvious inspiration, but the origin story is too quickly glossed over and the pages are curiously lacking depth.
Issue
6
Reader Rating0 Votes
0
The Good
Obvious inspiration from other vampire horror media
Good artwork with an emphasis on color and vampire facial designs are cool
The Bad
Origin story seems rushed, especially for first issue
Pages have a lot of wasted white space
6
Fair

The idea for Vampironica has been around for quite a while; I remember Francesco Francavilla’s cover artwork circulating back in 2015, which was probably all the temptation anyone needed to get excited for this new take in the Archie Horror series. Finally, Vampironica #1 is hitting stores thanks to Greg and Meg Smallwood (gotta say, that’s got a great ring to it), who have adapted Vampironica from the fun pages of the regular Archie series into a much more violent affair to match Afterlife with Archie, Chilling Adventures of Sabrina, and Jughead: The Hunger. Entitled “First Blood,” Vampironica #1 seeks to tell the origins of Veronica’s vampirism, while also prompting her to do some Blade-esque vampire hunting herself.

As first issues go, the Smallwoods’ plot is a bit problematic. The issue starts in the present, with Veronica fighting a duo of vampires at Cheryl Blossom’s house party Buffy-style, before jumping three days prior to show how Veronica got her long fangs and blood-red eyes. Vampironica then rushes right into telling the story of how Veronica sustained her immortal bite, and it relies on the reader’s foreknowledge of the Archie canon, as well as some of the more updated versions of the universe, to get much of its exposition across.

That means that, in this first issue, there’s really no build to the bite. Much of the storyline feels like padding as Veronica mopes about her love triangle with Archie and plans to meet Reggie for a date to kind of get back at her love interest. That’s when the Smallwoods reveal Veronica’s turn – she finds her father lying on the floor, a vampire creeping behind her, and suddenly she’s bitten before fighting back. There’s no explanation for the vampire’s appearance, and there’s no lead-up to it either; it just happens, and unfortunately it’s a wasted opportunity for Vampironica to withhold the origin story until a bit later in the series, where that moment might have the potential to build some interesting twists.

It also doesn’t help that much of Vampironica #1‘s pages are white wasted space; the margins are empty, leaving room for a lot more story within this 24-page issue. But even if the writers wanted this issue to be somewhat short and reliant on imagery, the panels are generically structured. Some of this hearkens back to the original Archie stories, and Greg Smallwood’s art does seem heavily inspired by canon; still, I can’t help but feel that Vampironica‘s pages are disappointingly lacking the creativity and depth that Afterlife with Archie or Chilling Adventures of Sabrina feature.

Still, the rest of Smallwood’s art is quite good, and I enjoy the colorful design and classic character work. There’s quite a bit of bright red blood here too, as well as some great vampire facial features. It’s clear that the Smallwoods have their influences in the right place, spanning from the aforementioned classics to American Vampire and everything in between.

But this first issue is severely lacking the pull that the other Archie Horror comics had with their debuts, and as an introduction to this storyline, Vampironica #1 seems too generic for its own good. Here’s hoping the Smallwoods can find their groove in subsequent issues and establish an arc that is as impressive as the original cover premiere for this series.