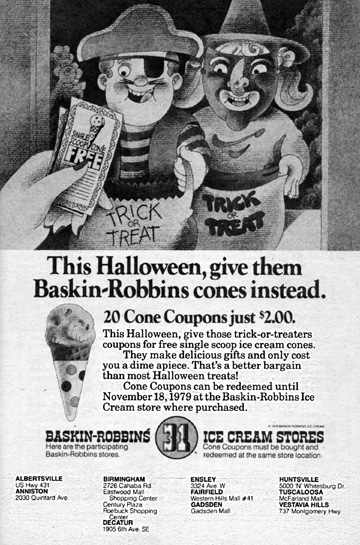 If you’re like me and live on the east coast, Halloween isn’t exactly the time you’re craving ice cream; there have been multiple Halloween nights with snow, sleet, and freezing rain. However, that doesn’t mean that I can’t appreciate a good Halloween ice cream advertisement, especially classic ones like these.

First off, let’s take a look at this Carvel Halloween commercial circa 1985, featuring Tom Carvel, Dumpy the Pumpkin, and Ricky the Witch. There’s a lot going on in this ad, but here are some things that I particularly love about this vintage clip:

Baskin-Robbins also got into the Halloween gig by attempting to outsell the candy business. This ad tried to woo consumers to purchase cone coupons instead, presumably handing them out to trick-or-treaters instead of candy. However, this seems like a rich-white-person proposition: sure, 20 coupons are just $2.00, but that still seems way more expensive than just buying a bag of candy and doling it out over the course of a night. (Kids only got a single scoop, too, which is downright shameful.)

We’ve already done Ben & Jerry’s, so feel free to check out that special edition of The Evil Ad here.

In case you needed a spoon to eat that ice cream, Universal has you covered. They put out ads for their Monster I-Scream Spoons like the one above, where you could get 12 spoons for only $1.00. That’s a damn steal, and personally I would have definitely taken them up on this offer at the time. With figures like the Mummy, the Wolf Man, Frankenstein, and the Creature from the Black Lagoon, you can’t go wrong eating your ice cream in style.

The result, though, was little more than intricately designed plastic spoons: