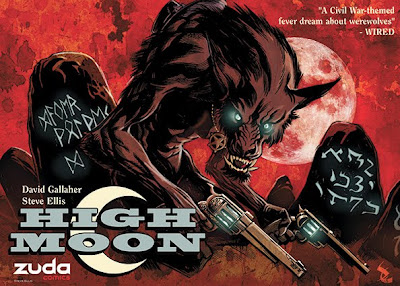 At first, I thought High Moon was just about werewolves, and I was seriously wrong. High Moon might contain werewolves, but it tackles so much more in its short, three-chapter graphic novel that it is almost offensive to assume that Gallaher and Ellis were making only a werewolf comic.

In all honesty, it’s no wonder that High Moon won the competition. Its story is a great mix of western and horror that blends seamlessly to create a fantastic romp through the village of Blest and onward. Werewolves and other creatures of darkness have been tormenting villagers, and it is up to the heroes, who are all mysteriously named Macgregor, to battle these forces of evil, while also having some secrets up their sleeves as well. These heroes are all moody, battle-hardened cowboy types, looking for vengeance and spreading a little violence as well.

High Moon transitions extremely well from chapter to chapter, taking on a new story arc at each turn. Throughout the first chapter, we are even presented with a protagonist that is developed and then dies off in a surprising twist! Gallaher’s plot is fully focused and exceedingly smart, remaining high intensity and often emotionally jarring throughout the course of the novel. This mood is equaled by the consistent artistry from Ellis, who captures the grit of the West with superb animation. The color is also widely varied and lush, showcasing the splendors of the environment.

Awesome action sequences abound as well. Ellis’ drawings are complex enough to allow the combat to appear both smooth and intricate at the same time, and stylistically, I think the drawings of High Moon are some of my favorites thus far after reading three comics series in a row. The creature designs are also surprising; these aren’t the type of werewolves most of us are used to, because they have evolved into winged creatures with multiple eyes. They are also much less like wolves and more like legitimate monstrous beasts.

High Moon‘s first volume is full to the brim with action and suspenseful plot elements. We travel from village to village, from the western Texas town of Blest to the snow-capped mountains of an Indian village that is threatened by soldiers. There’s never a dull moment for the people of High Moon, nor is there one for the reader. I love how each arc wraps around to the others, and incorporates helpful bits of background information in each to give the reader some exposition on the Macgregor’s. The storytelling is inspiring, and though I found it a bit confusing at first, I quickly found myself wrapped up in the plot and the Western tropes.

Hopefully, Zuda Comics and the team of Gallaher and Ellis come out with the second volume of the series soon, as the finale of this novel left me hanging by a thread. I’m eager for more werewolf adventures with the Macgregors, as their characterization is actually quite successful despite the fact that the Macgregors feel slightly distanced. DC Comics’ horror line-up has yet to disappoint me, and I think High Moon is a great comic that feels full of superheroes when none are to be found. Just a bunch of cowboys doing their jobs, thank you very much, ma’am.