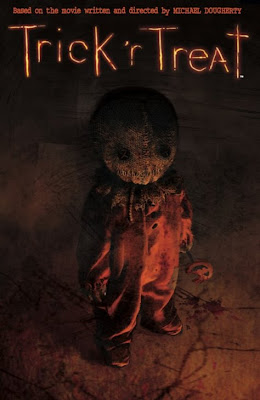 Right on the heels of the DVD release of the film, DC Comics is offering all of us fans a little something extra for Halloween. While Trick ‘r Treat had tinges of comic-related goodness, this is a fully-colored graphic novel depicting each story from the film, gloriously drawn by four different artists and written by Marc Andreyko. While the stories generally follow the film, the art styles all add a new touch, giving a sense of ownership to each artist.

Mike Huddleston gives us the first chapter, covering the opening scenes of the film. Huddleston’s art feels pretty realistic to me, giving everything a dark purplish tint. He does a fantastic job of capturing the suspense and unpredictability of the film, especially in his depiction of the “pumpkin-carving” scene.

Grant Bond’s got the next set of stories, and he gives them a bit more of a cartoonish feel. Even with this, though, I think Bond’s got the creepiest style for his stories, with the ghost kids taking on a physical presence and a decidedly menacing appearance that sends shivers down my spine. His work here is very well done, and I love how he draws the dark sky of All Hallow’s Eve with a gloomy, overcast facade.

Christopher Gugliotti tackles the werewolf scene, and though his artwork is very intricate, I have to say that I sometimes got confused by what was happening. The character designs can be pretty similar, which is what really threw me off, as I was unsure of exactly who was who, most noticeably during the action sequences. Gugliotti does have some nifty violence-drawing capabilities, and his werewolf designs are grotesquely imposing.

Finally, Fiona Staples (also artist of the recently-reviewed North 40 series) finishes up with the last chapter, a pleasing and inspired representation of old EC Comics artwork Great combat and fantastic artwork make this one of my favorite chapters out of the graphic novel, as I am definitely a fan of the similarities between the old Tales from the Crypt art and the panels featured in Staples’ piece.

Surprisingly, the comic adaptation of Trick ‘r Treat feels fairly consistent considering the use of four different artists. I love how the aspect of using references to other scenes comes into play with the comic as well as the movie; the only problem I had with this was that sometimes the characters look drastically different than they did in the other chapters. Overall, a very solid comic to read alongside the film that only continues the appeal of the perfect Halloween shown in Trick ‘r Treat. A word of warning, though – I read the comic before I saw the movie, and it became sort of a letdown because I already knew all of the plot before seeing it. I would wait on the comic until you’ve seen the movie, lest you be deprived of enjoying the suspense and secrets of the film.