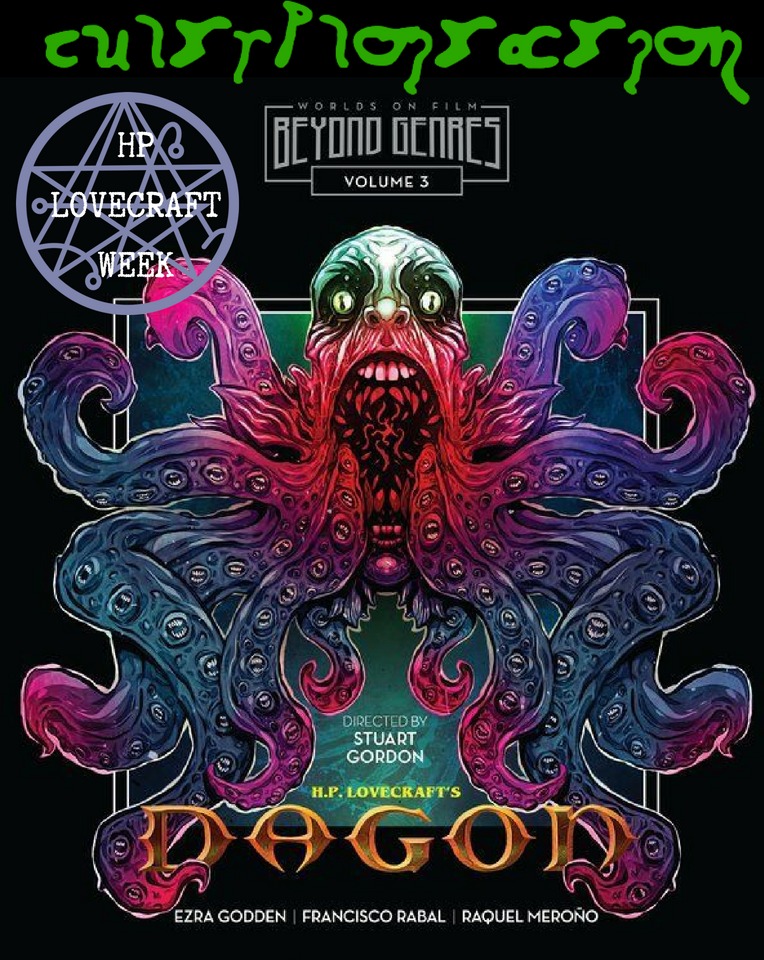 Both editors agree - Dagon isn't Stuart Gordon's best HP Lovecraft film, but it's still an entertaining movie as a late edition to his work. Umbrella Entertainment's Blu-ray is quite good, but it does lack new extras.
Film
Blu-ray
Reader Rating0 Votes
3.8

Stuart Gordon’s late entry in his HP Lovecraft-inspired filmography, Dagon, has always been a strange cult hit. While it is arguably one of Gordon’s poorer films from a technical standpoint, its entertainment value is still rather high thanks to mutated fishmen and a half-transformed topless goddess. To celebrate Umbrella Entertainment’s Blu-ray release of Dagon as well as HP Lovecraft week, we’ve decided to do a Cult Double-Shot for this film, with both editors weighing in on the merits of Gordon’s 2001 classic.

This was my first time rewatching Dagon in quite a while, and the first thing that I noticed about this film was the similarities and differences to HP Lovecraft’s very early story “Dagon.” That short story was a pretty rudimentary tale in Lovecraft’s works – it starts his obsession with the elder god mythos, but it also really doesn’t go anywhere. I feel that Gordon’s Dagon suffers a similar fate; it just doesn’t seem to get anywhere throughout its running time. How do you feel about the plot direction?

It was also quite awhile since I’ve seen Dagon, having rented from a Blockbuster(!) when it first came out. I remember walking away a bit disappointed, as I expected more from Stuart Gordon. Now that I’ve seen it again, I’ve warmed up to the film, but I do agree the plot doesn’t go anywhere. I’ve never read the short story (although, Umbrella Entertainment was kind enough to include it on the reverse sleeve of the Blu-ray), so just basing my opinion on the film itself, there was a loads of potential squandered. The location of the remote fishing village makes for an eerie place, and the fish people are disturbing, but that’s it. We never truly know what is happening in this town. Sure, they’re going to the sea, I guess, but who exactly is Dagon, and why are they stealing people’s flesh? Questions, questions questions.

I do think that Gordon leaves it largely open-ended because that is also Lovecraft’s way – give very little information about the actual entities in essence because it goes beyond human understanding. However, in some ways it does almost seem like a waste of time.

Still, the idea that the main character Paul (Ezra Godden) is either fated or called forth to Uxia is an interesting premise that does fit in line with Lovecraft’s ideas of inherited curses. The end does come together to that extent, I guess. Plus, we do get to see the lovely Macarena Gomez topless once again.

You do make a solid point. It seems most H.P. Lovecraft inspired films always avoid revealing what the monster looks like. It probably was a blessing to not reveal Dagon, as the CGI is just godawful in this film. The early 2000s stuff of CGI where they didn’t care if it looked real. Sure, Macarena Gomez has nice boobs, but that titillation is squandered by some truly abysmal CGI tentacles.

The CGI is probably the most recognizably awful thing about the film. While Dagon does show its budgetary restrictions in other ways (like a poor soundtrack – seriously, it lacks a musical score about 80% of the time), its CGI is an eyesore. That early scene with the shipwreck is basically a cartoon – like something out of the ’90s show ReBoot.

I personally think Resident Evil on the PS1 had better CGI.

Agreed! One thing Dagon seems to have influenced, though, is Bloodborne‘s cultist designs. All of the fishmen from this film could very easily be imported into Bloodborne‘s level design, right down to the weird guttural utterings they emit.

Makes you wonder if the creators of Bloodborne were influenced by Lovecraft in their design of the game. Realistically I can’t seem being like “Hey, should totally base a game around the pointless villains in Dagon!”

Definitely, I think the intention was that Bloodborne mimic Lovecraft’s mythos. But also very interesting how both things interpreted cultists in the same way.

Let’s move on to Umbrella Entertainment’s Blu-ray of the film. This is volume 3 in their Beyond Genres: Worlds on Film series, and it joins Re-Animator and Bride/Beyond Re-Animator with matching slipcover art. I like the way this series is going and certainly just giving it the same type of cover art fuels the collector in me.

Yes, I’m very OCD when it comes to collectible covers and symmetry, so what Umbrella Entertainment is doing is making me one happy fanboy. It will be somewhat odd when they venture away from H.P. Lovecraft films with their next release, Razorback, but like you said, they are keeping the cover art in the same style.

The Blu-ray quality itself is very good too. I think they’ve done a good job with the scan on Dagon, even if the actual film quality and budgetary restrictions are a hindrance. I really didn’t find any problems with the scan or the audio besides the audio being somewhat quiet (and I think that’s just a flaw in the film itself).

Agreed. I can’t say whether Vestron’s release looks any better, as I haven’t seen it and I don’t want to take out a second mortgage to buy it. However, I think Umbrella has done a solid job with the transfer, and the audio is acceptable most times, but like you said, it’s very low. Subtitles almost become a requirement for viewing.

One thing that might be a dealbreaker for some fans is the lack of new special features. Umbrella has collected a lot of old interviews with most of the cast and Stuart Gordon too, along with theatrical trailer and stills. But there’s nothing new on here like with Vestron’s release, not even an audio commentary. Also, the layout of the menu is a little frustrating – you have to forward through the interviews to get to specific ones.

That definitely could be a deal breaker for people. Nonetheless, what was included is not bad, but just very old. It would be nice to hear what people have to say about the film now that we are this many years along. I never really noticed the interview issue, but you are right, it would have been nice for them to separate them into selections in the menu. Umbrella did the same thing with the Bride/Beyond Blu-ray that we reviewed recently.

Overall, I was happy with this release though I would argue that hardcore Dagon lovers might want to splurge for the Vestron Blu-ray. If you’re not into extra features, though, this is a great region-free release.

I am very happy to own the Umbrella Entertainment release. I can see the benefits in buying the Vestron release, but the cost difference definitely puts a hindrance on doing just that. Nevertheless, you can’t go wrong buying either release.